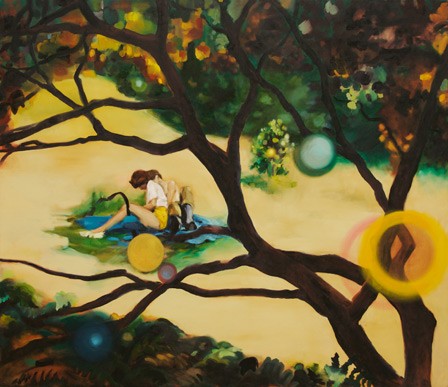 Andrea Mortson (NB), You Are Loved, 2009-10 Collection of Confederation Centre for the Arts, PEI

To assemble the exhibition Oh, Canada (opening to the public on Sunday, May 27, 2012, at MASS MoCA in North Adams, Massachusetts) curator Denise Markonish visited nearly every province and territory in Canada.  In her travels (comprising over 400 studio visits) Markonish discovered a fascinating world of art, rich in craftsmanship with a deep interest in landscape and identity. Oh, Canada showcases the vast expanse of art made in the country, spanning all media and crossing generations and geography.  Acknowledging that this is one curator's view and by no means acomprehensive picture of Canadian art today, Oh, Canada focuses mostly on artists less recognized outside of Canada, providing a fresh glimpse of a vibrant art scene that is too little known in the United States.  "At a moment in the international art scene that is particularly attuned to the exotically remote and embracing of 'anti-aesthetics', this is a show of art from close to the United States, often beautifully made," said Joseph Thompson, director of MASS MoCA.   "Canada's proximity, and shared North Americanism, is a source of interesting friction.  It's so close and familiar, yet we sometimes barely know it."

New commissions for Oh, Canada include an EP of songs by art-alternative folk rock band The Cedar Tavern Singers  AKA Les Phonorealistes, such as Oh Canada, Oh Canada, which is an absurdist romp through imagined genres of Canadian art like Neo-lumberjack Abstraction, Relational Lacrosse, and Beaver Dam Earthworks; Gisele Amantea's Democracy, which adapts a Louis Sullivan design in flocking down a 90'-long gallery; Micah Lexier's A Coin in the Corner, in which a series of newly minted coins will be installed treasure hunt-style throughout the museum; and Michel de Broin's Tortoise, an outdoor installation constructed of oversized picnic tables.

Trends in Canadian Art: Identity and the Landscape

Through her research Markonish identified several trends prevalent in contemporary Canadian art some of which include artists examining identity like First Nations artists Rebecca Belmore, Ruth Cuthand, Wally Dion, Terrence Houle, Kent Monkman, and Joseph Tisiga. Many of these artists address the history of Aboriginal peoples throughout Canada's history, from early colonialism and land ownership debates to the Indian Act, which took away many rights, including the right to vote and participate in cultural practices. Other artists addressing identity are Mario Doucette, who examines the Acadian history of the Maritime Provinces, and Annie Pootoogook and Shuvinai Ashoona who depict lnuit life in Nunavut.

Close looking at the landscape is a trend also evident in Oh, Canada. Artists like Amalie Atkins, David Hoffos, and Graeme Patterson examine surreal/uncanny elements in this landscape, whereas Ned Pratt, Kim Morgan, and Rita McKeough explore memory and politics. Morgan and Pratt probe the coastal landscape: Morgan's cast latex lighthouse becomes a memorial to a time long gone, while Pratt emphasizes where the man-made meets nature. Rita McKeough's Alternator addresses the controversy over the oil sands in northern Alberta.

Another key element of the Canadian landscape is the North, as exemplified in Charles Stankievech's LOVELAND. This work comments on the militarization of the landscape by Cold War paranoia and the North American Air Defense (NORAD) Defense Early Warning (or DEW Line), installed in the late 1950s as a defense against Russian invasion.

Canada has a long history of conceptual art practices, from early collectives like the Vancouver-based N.E. Thing Co and Toronto's General Idea, to the visiting artist and printmaking programs at the Nova Scotia College of Art and Design (NSCAD) that brought well-known conceptualists like John Baldessari and Sol LeWitt to Halifax. Senior artists Garry Neill Kennedy (who was once president of NSCAD) and Michael Snow continue to explore the conceptual - Kennedy, in his installation Spotted which addresses CIA planes used to transport suspected terrorists, and Snow in his video Solar Breath [Northern Caryatids] which contemplates subtle natural phenomena through the framing device of the camera. Other conceptual-based practices include those of Craig Leonard, Eryn Foster, Michael Fernandes, Hans Wendt, and Eric Cameron.

A Return to Craft and Making

In Canada there has been a notable return to the emphasis on craft materials and labor-intensive techniques like felt, ceramics, paper-cutting, and embroidery. A new generation of artists has emerged who borrow from these media and processes, using them to create contemporary works that speak to varied ideas such as beauty, the grotesque, history, and materiality. This group includes: Luanne Martineau who works with handmade felt; Ed Pien whose use of intricately cut paper was inspired by a 2004 trip to China; Shary Boyle who extends the themes of craft and the body; Clint Neufeld who uses traditional craft to explore gender; and Janice Wright Cheney and David R. Harper who both employ taxidermy as their launching point.

References to the vernacular are frequent in the exhibition: Kim Adams' materials come from hardware stores, dollar stores, and even car dealerships. Valerie Blass and Diane Landry transform the mundane into the magical, using materials like artificial hair on mannequins (Blass) and water bottles filled with sand (Landry). Both Nicolas Baier and Kristan Horton use photography to explore the commonplace, creating portraits of the artists through studio objects.

A members' reception for the opening of Oh, Canada will be held on Saturday, May 26, from 5:30 - 7:30 PM. At 9:00 PM, Brandon Canning, co-founder of Broken Social Scene, will DJ a dance party interspersed with musical interludes by Oh, Canada artist/musicians to celebrate the opening. Other Canadian performing artists will grace MASS MoCA's stages and courtyards throughout the summer and fall.

MASS MoCA (Massachusetts Museum of Contemporary Art) is one of the largest centers for contemporary visual and performing arts in the country and is located in North Adams, Massachusetts, on a restored 19th-century factory campus. MASS MoCA's galleries are open 11am - 5pm every day except Tuesdays. In July and August galleries are open every day from 10 AM - 6 PM. Gallery admission is $15 for adults, $10 for students, $5 for children 6 - 16, and free for children 5 and under. Members admitted free year-round. For additional information, call 413-662-2111 or visit www.massmoca.org. MASS MoCA is an independent 501C3 whose operations and programming are funded through admissions and commercial lease revenue, corporate and foundation grants, and individual philanthropy. Except for an initial construction grant from the Commonwealth of Massachusetts, and competitive program and operations grants from the National Endowment for the Arts and the Massachusetts Cultural Council, MASS MoCA is privately funded: 90% of annual operating revenues are from earned revenues, membership support and private gifts and grants.

Support for the Exhibition

MASS MoCA is grateful to generous sponsors who make the presentation of Oh, Canada possible. Lead sponsors of the exhibition are Canada Council for the Arts and TD Bank Group. Additional major support comes from The W.L.S. Spencer Foundation. Contributing sponsors include Francis J. Greenburger and Time Equities, Inc., and Associate sponsorship is by the Canadian Consulate General. Additional support comes from Manulife Financial, Scott and Ellen Hand, and the Massachusetts Cultural Council.