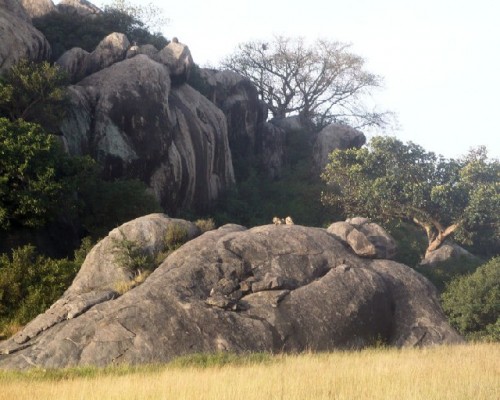 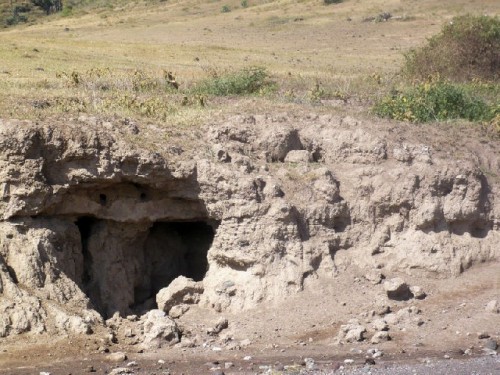 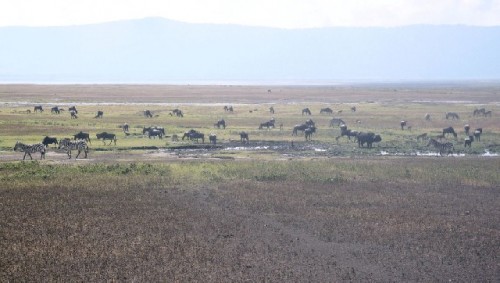 Animals on the crater floor 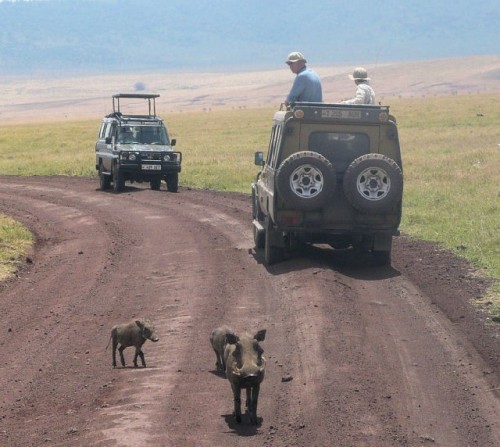 Warthogs on the road 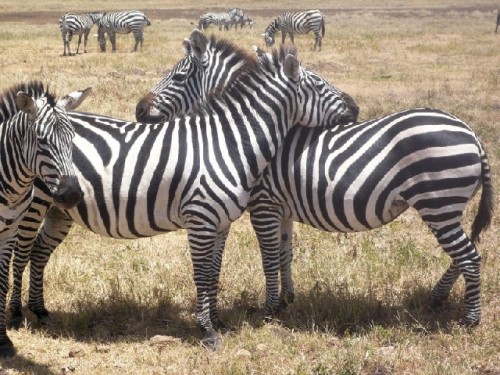 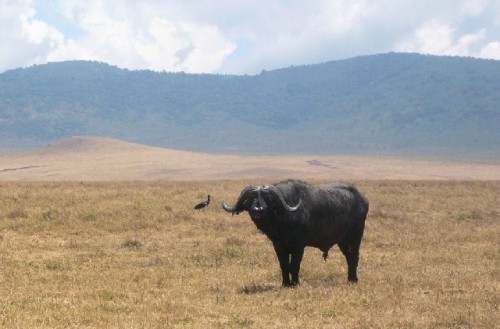 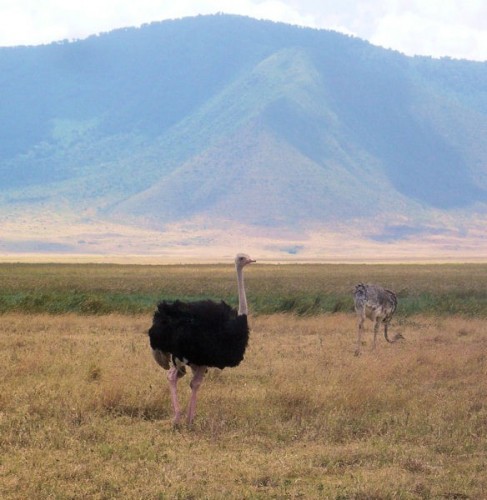 Ostrich on the grassland 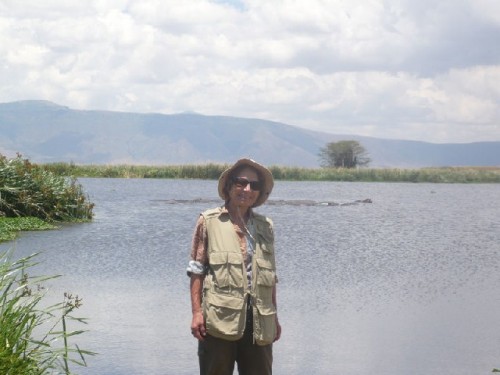 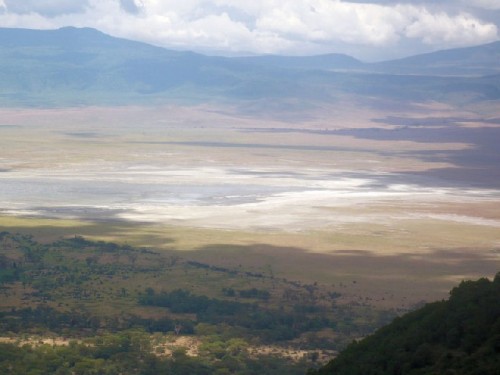 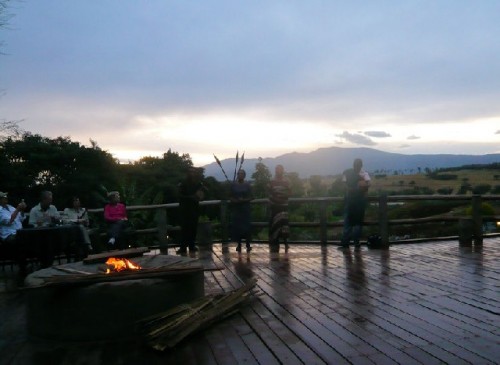 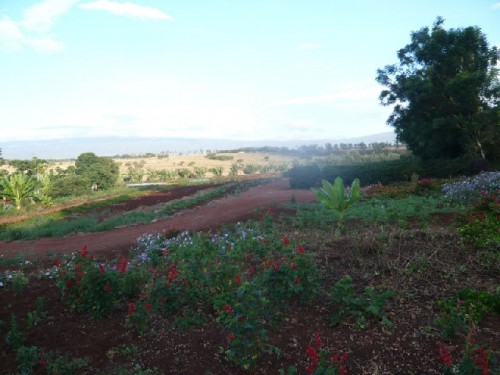 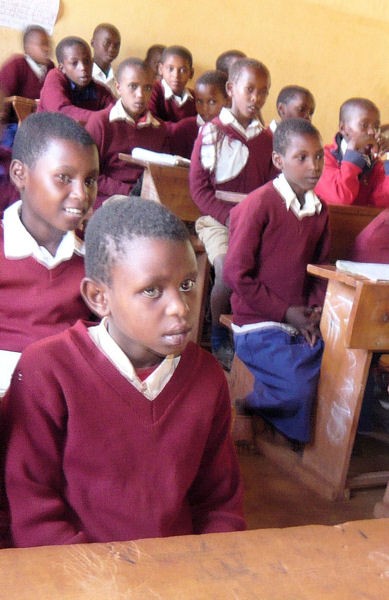 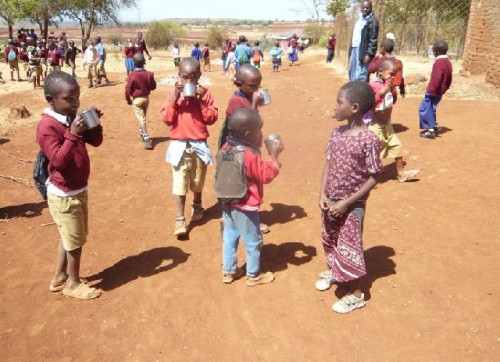 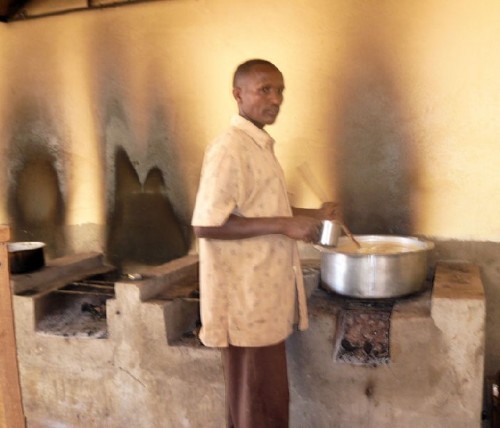 Cook in the school kitchen 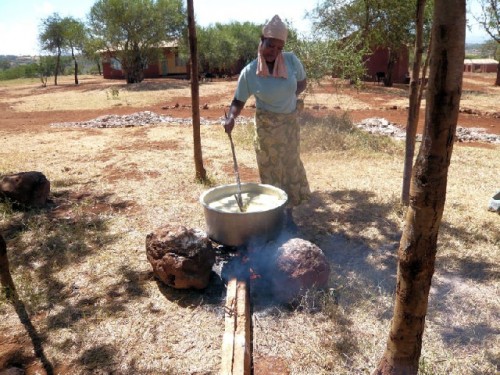 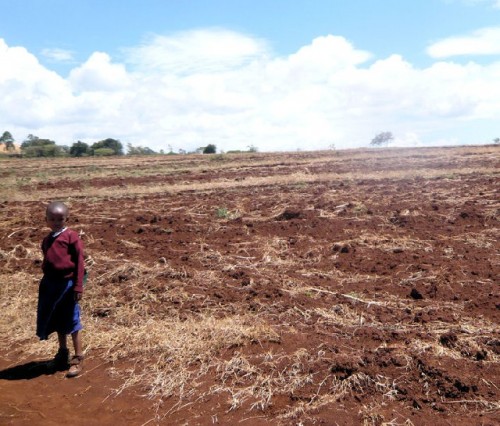 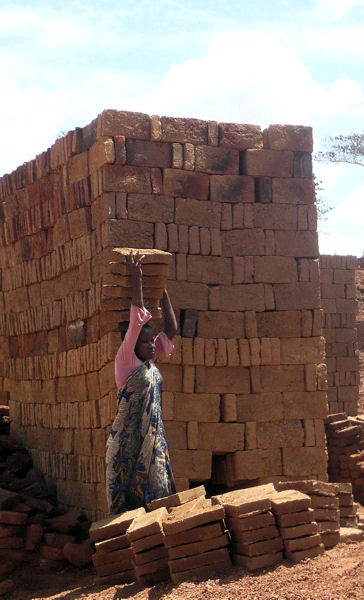 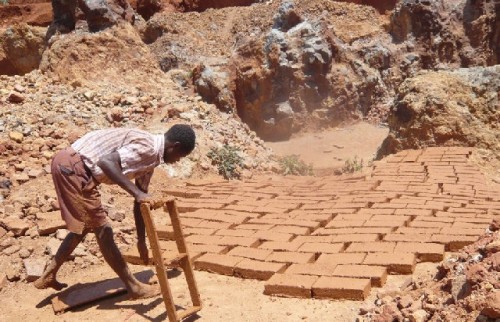 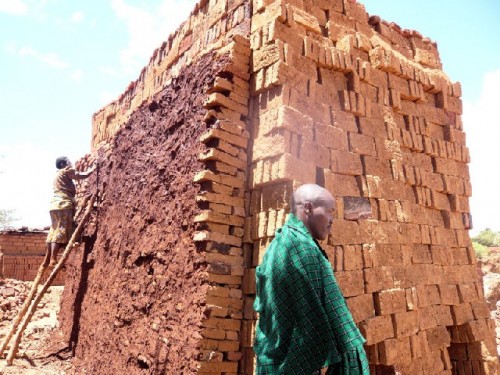 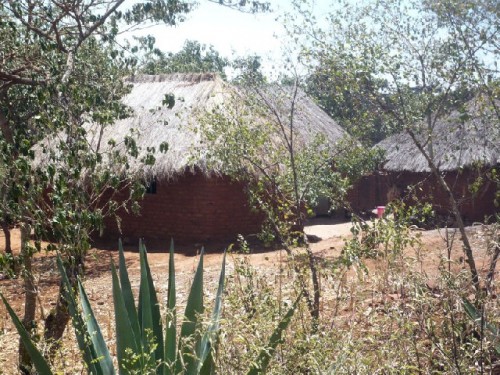 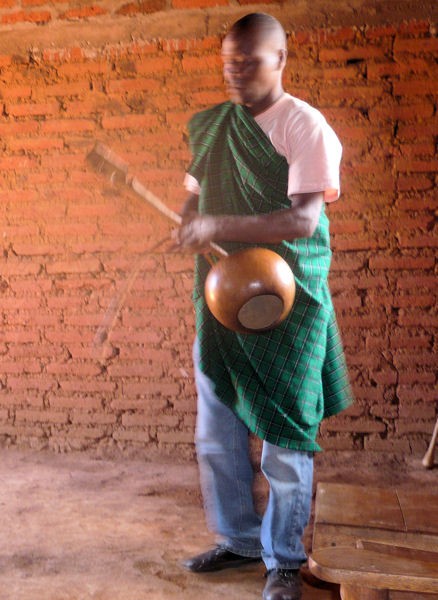 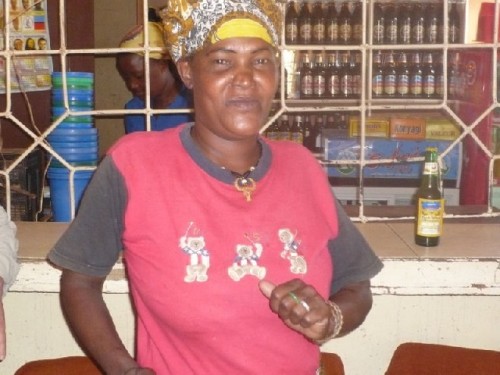 Bartender in the local bar 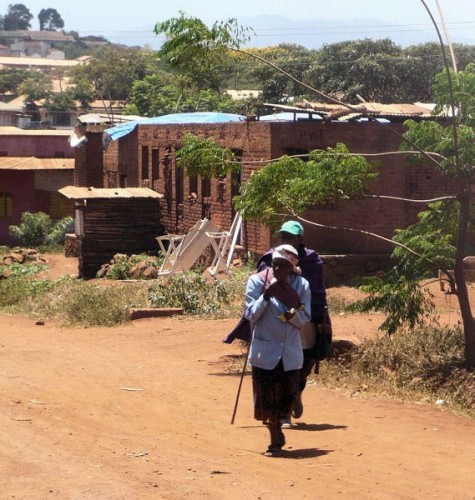 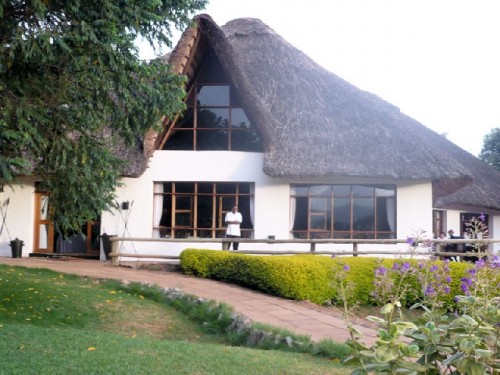 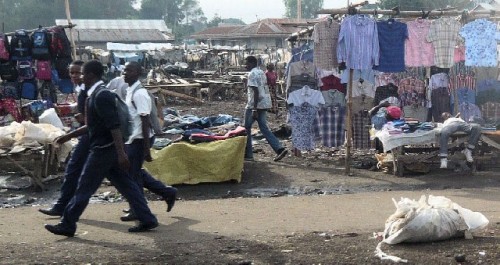 View from the bus window 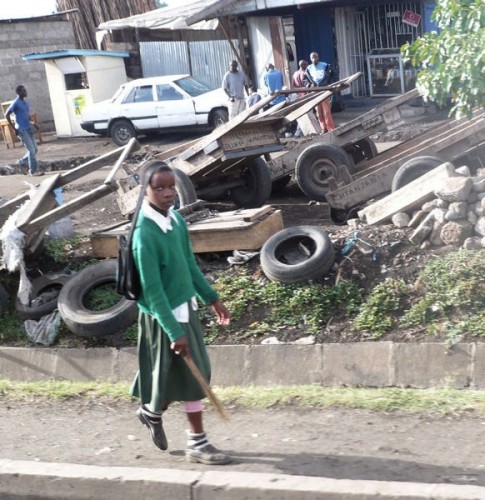 A student on the road 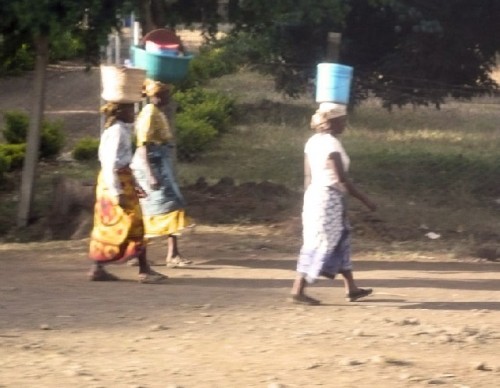 Women on the street 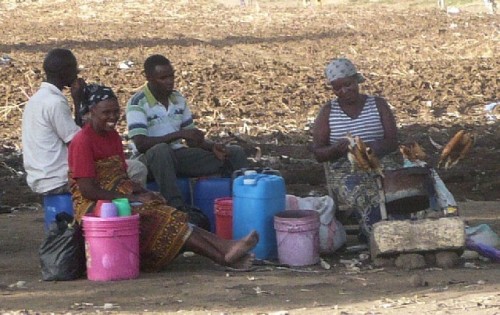 Camaraderie in the shade 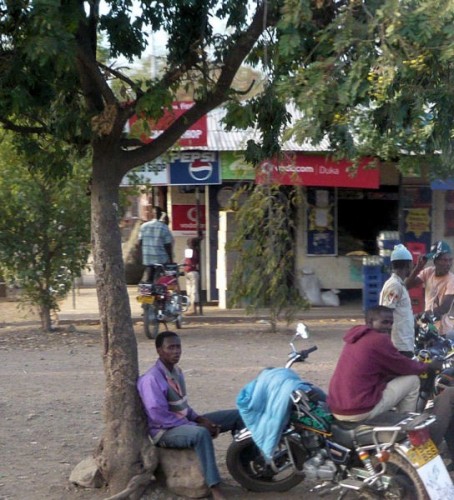 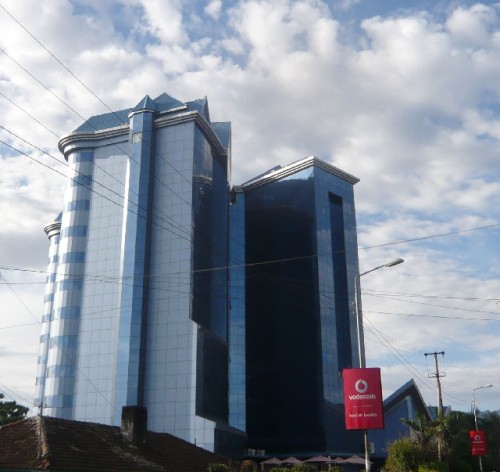 Zebras looking out for each other

The road to the Ngorongoro Crater (more accurately Caldera) offered interesting sites such as Naabi Hill, a conglomerate of kopjes in the middle of the Serengeti Plains. Here the grey crystalline rocks of the hill break up the hard-pan surface of the open plain, allowing more trees to grow than on other kopjes and thus acting as a botanical garden for animals such as dikdiks, guinea fowl, lizards, porcupines, and pythons. Baboons enjoy climbing the kopjes, while big cats use them as dens. Passing by a hyena’s den dug by the hill, we descended to the floor of the volcanic bowl.

The Ngorongoro Crater marks the ancient walls of a collapsed volcano. The near-circular floor is an expanse of flat, open grassland some 12 miles across, with steep walls over 2000 feet high. The rim of the crater is 7500 feet above sea level. Surrounded by a ring of extinct volcanoes, the crater is a remarkable natural amphitheater and one of the most famous wildlife refuges in the world. Because of its permanent supply of water, over 20,000 animals live here, keeping a balance of predator and prey year-round.

A prevailing atmosphere of tranquility surrounded us as we drove through the volcanic basin. Zebras and wildebeest with their young nearby flooded the expanding fields, hard at work mowing them. Some zebras huddled together, each looking in a different direction, ever watchful for a stalking predator. Thomson’s gazelles, distinguished by their black side stripe, congregated around waterholes as they grazed, while cape buffaloes stood out majestically in the open grassland against the backdrop of mountains. This amazing landscape was a stage set for other animals as well, such as hyenas and ostriches, which are well-adapted to life on the open plains. At a distance our guide spotted a rhino with its baby, which I was able to see with the aid of binoculars. Rhinos are quite scarce, so it is unusual to see them out and about.

A picnic lunch by Lake Manyara was an opportunity to stretch our legs as we were unable to get out of our vehicles in the wild despite the seeming calm. Then we began climbing back up the steep forested side of the crater, looking down upon it from the highlands, where we spent the last two nights of our trip at the Ngorongoro Farm House. The Farm House, set amidst flower gardens and a coffee plantation, had a spectacular view of the woodlands and grasslands below. Each of our bungalows was named after an animal in Kiswahili. Mine, called kuru, offered a welcome change to the bucket of hot water delivered each morning at the Serengeti camp. Although no longer in the wilderness, we were each accompanied to our rooms after dark by a member of the lodge staff armed with a long stick.

The first evening, we sat around a wood fire on the verandah of the Farm House and enjoyed music and dancing by members of the local Iraqw tribe. With the fire as our only source of light, the silhouettes of the dancers were like apparitions against the backdrop of the surrounding mountains. The Iraqw people allegedly came from Iraq around the 13th century and now occupy a large area called Mbulu around the Ngorongoro Crater.

In the morning we visited the Bashay School, named after a village in Karatu. A briefing by the principal of the primary section provided insight into the difficulties of educating children in Tanzania. The government-funded school receives $500-800 a year for all 700 students. Upon completing seventh grade, which ends primary school, students must take national exams to continue their education for another four years in secondary school. Those who fail the exams go to vocational schools, without the opportunity to repeat a year. High school is two years, following which students may attend university.

Students’ exam scores have increased consistently, thanks to additional support from private sources such as the Grand Circle Foundation in the US. As part of the Foundation’s World Classroom initiative, the school has acquired a new building to reduce crowding, in addition to classroom equipment and supplies. Each class has 30-40 students, who walk long distances to school. The principal has introduced a new incentive: those who do well on the national exams receive a bicycle as a graduation gift. After leaving contributions we had brought from a list of suggested supplies — pencils, pens, chalk, crayons, paper, rulers, erasers, sharpeners, world maps, balls of any kind, and skipping ropes — we toured the school.

The children were in the yard for their mid-morning snack. A teacher ladled porridge, fortified with nuts and millet seeds, into aluminum cups, which each child rinsed out in a basin of water upon finishing. The fifth-grade students sang for us in Kiswahili, the primary language of instruction. The curriculum includes math and science, in addition to English as a foreign language. Our tour ended with a visit to the kitchen. The cook was stirring another pot of porridge over a wood fire for lunch, which children drink instead of using spoons, facilitating clean up as water is scarce. In one corner of the kitchen, a wood stove under a tin water heater supplied hot water as needed; another cook stirred porridge with a sturdy acacia branch over a fire outside.

Afterwards members of the Iraqw tribe, who had danced for us the night before, received us in their own homes in the Brickmakers’ Village. Using a stick, a young man pounded red clay from the hillside until flattened; the clay was then shaped in molds and left to dry. Stacking dried bricks on her head, a young woman carried them to construct a kiln, which was made of brick walls and plastered with mud, in order to seal cracks and retain the heat generated from within the structure; baking bricks was a three-day process. We then visited a family in their brick dwellings with thatched roofs. Wrapped in long skirts like the locals, we learned the dance steps we had watched the night before from the daughter of the family, while her father played a long-necked gourd instrument with a bow.

On the way back to the lodge, we stopped for a walk through the local market. Sacks of grains, some drying on the ground, produce and dried fish in plastic containers, as well as other plastic and aluminum ware stood out in the mayhem. Men’s shirts for sale hung from tree branches; a sign for a women’s hairdresser beckoned with colorful plastic buckets at the entrance. We stopped in the local bar for a taste of banana beer. Feeling high on its alcohol content, men in shukas danced while women and children watched.

Following a final view of the crater below from the verandah, we gathered for a farewell dinner in the main lodge of the Ngorongoro Farm House. Over a plentiful buffet dinner, including slow-churned ice cream, we profusely thanked our three driver-guides, who had negotiated some very rough roads, while not missing a single animal or bird near or far.

On the morning of our final day, we had a leisurely drive from Karatu to Arusha, as we had an evening flight back to the States. It was market day at the village of Mosquito Creek; yet we did not linger here, as Ridas had promised to take us to a Cultural Center on the outskirts of Arusha. A new museum at the center has galleries of African art arranged on walls that spiral upwards like the Guggenheim Museum in New York City. The rest of the center is jammed with shops selling a range of crafts, from textiles to masks and beadwork. Due to our limited time here, I was fortunately able to limit my shopping to a couple of T-shirts with animal motifs for my grandchildren and a beaded Masai warrior’s necklace.

Arriving at the Olasiti Lodge was like coming to a home away from home. We had the use of a day room, which allowed us to repack for our journey back to the northern hemisphere. I also picked up two T-shirts I had ordered from an artist at the Shanga House before leaving for the wilderness. One of these black T-shirts is long-sleeved with a row of silkscreened zebras along the edge, and the other is short-sleeved with a row of giraffes.

While we had been in and out of Arusha several times, we had not had a chance to see the center of town. On the way to the airport we drove through the main street, where heart-wrenching poverty mingled with occasional modern high-rises — mostly hotels, underscoring Tanzania’s rising prosperity due to the developing tourism industry. I kept taking pictures from my window as we speeded along, with warnings from Ridas that if I stuck the camera out, it was likely to be snatched away. Therefore, my last photos are impressionistic images of poverty on sidewalks and streets, taken through the shut windows of our van. These mirage-like images will remain distant from the indelible photos in my notebook — beautiful Masai women with shaven heads and adorned necks, tall men in red shukas with their livestock, villages alive with wives and swarms of children, gentle gazelles, towering giraffes, endless golden grasslands, and the majesty of  the African sky.

Poverty will not disappear overnight in Tanzania. But at a dark time for the world economy, progress in this ancient and beautiful land is a promise of growth.