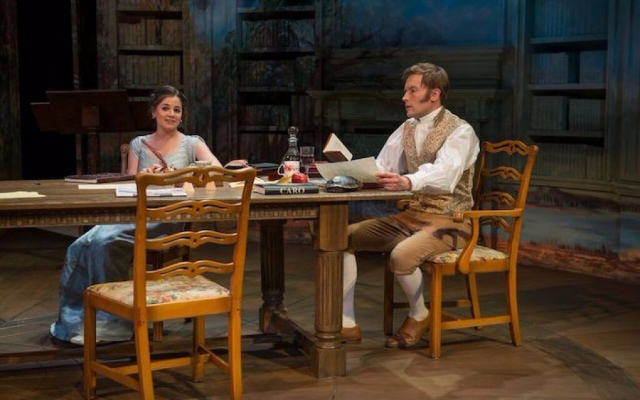 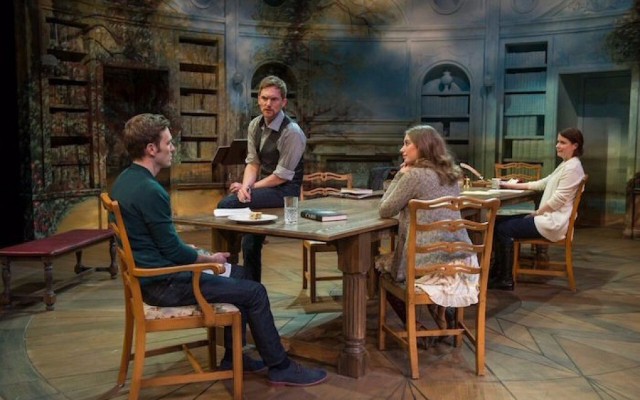 Writers Theatre opened its spectacular new theater in Glencoe this week with an appropriately spectacular production of a play by one of today’s greatest playwrights, smartly directed by Michael Halberstam. It was almost a four-star evening.

Tom Stoppard’s Arcadia, a play that tracks characters from two eras, sometimes in the same scene at the same time, is a complex play interlaced with many intellectual games. The story, not a linear narrative, involves the clash between the rational and the romantic in art and science, as well as in life. Also important is the design of gardens, specifically the gardens of Sidley Park, the country house in Derbyshire, where the play is set.

In 1809, the charming Thomasina Coverly (Elizabeth Stenholt), a 13-year-old maths genius, is also learning about love, life and carnal embrace. All of it from her urbane tutor Septimus Hodge (a fine nuanced performance by Greg Matthew Anderson). Septimus is a scholar himself who always seems to know more than he lets on. He’s a schoolmate and friend of Lord Byron, an important but unseen figure in the play.

In the modern era, Hannah Jarvis (Kate Fry), historian and scholar of gardens, is studying the Croom papers. In the earlier era, Lady Croom (delightfully played by Chaon Cross) is Thomasina’s mother and oversees the redesign of the gardens by landscape architect Richard Noakes (Gabriel Ruiz). Barging in to the later scene is Bernard Nightingale (Scott Parkinson, in a tour de force performance) a literary scholar, who has come to investigate a story about Lord Byron for a paper he is to present at an academic conference. (Bernard’s rant about the value of poetry and beauty over science is a highlight of act two.) Valentine Coverly (Christopher Sheard) is a post-grad student in mathematical biology, who, along with Hannah, represents the rational over the romantic. Chloe Coverly (Callie Johnson) is the daughter of the family.

In summary, the scholars in the modern era scenes are trying to answer questions about events in 1809. The disputes between the two eras involve the redesign of the garden, the whereabouts of Lord Byron on a certain day in 1809, the result of a duel, the nature of chaos theory, and Thomasina’s work on Fermat’s Last Theorem.*

The 1809 garden was to be in the picturesque style and would include a viaduct, a grotto and a hermitage, to be occupied by a hermit, a fact that would turn out to be important later. (No spoilers here.)

The new Writers Theatre was designed by Studio Gang Architects, led by design principal Jeanne Gang. The new building shines beautifully in the suburban darkness. The building has a generously sized lobby area and bar, which will be a useful event space. The main stage (a smaller studio space will open later) seats 255 in steeply raked rows around a thrust stage. Lighting and technical equipment is housed in a dome-like structure above the stage.

One of the theatrical delights of Arcadia is Stoppard’s stage direction that the denizens of both eras should exist in the same space (a room adjacent to the garden), with the same furniture and props. No need for crew members to move furniture or add or remove props. This conceit means that Thomasina may sit in front of Valentine’s laptop while discussing chaos theory with Septimus. Characters in both eras may move or even feed Plautus (or Lightning), the ancient tortoise, who mostly serves as a paperweight.

The scenic design by Collette Pollard focuses on the long table central to both eras. The backdrop represents an elegant design in the Victorian manner, enhanced by John Culbert’s lighting. Rachel Anne Healy‘s costumes do justice to both male and female characters, especially in the 1809 scenes. In the final scene, a dress ball is taking place in the modern era and characters from both times dance as the play ends.

The mostly excellent performances in Arcadia are marred by an auditory problem. Some of the actors couldn’t be heard when they performed with their backs to our side of the stage. Was the new Writers Theatre venue fully vetted for its auditory quality? If it was, then some direction is needed with a few of the actors. I noticed a number of audience members (of all ages) sitting forward in their seats, not wanting to miss a word of the Stoppardian dialogue.

Tom Stoppard is known for his cleverly verbose plays that mix science and technology along with artistic and philosophical topics. He has written dozens of plays, films and TV shows. Some of his best-known works are Travesties, Jumpers, Rosenkrantz and Guildenstern Are Dead, the trilogy Coast of Utopia and the screenplay for Shakespeare in Love. The Royal Institution of Great Britain named Arcadia one of the best science-related works ever written.

Novelist Richard Powers (a University of Illinois artist in residence) writes novels that match Stoppard’s themes in blending science, technology and the arts, such as The Gold Bug Variations (DNA, music and computer science, 1991) and Galatea 2.2 (a Pygmalion story about artificial intelligence, 1995). Powers was asked by an interviewer what works he wished he had written. He replied, “Tom Stoppard’s [play] Arcadia. I’d trade my soul for it.”

Arcadia continues at Writers Theatre, 325 Tudor Court, Glencoe, through May 1 with performances Tuesday-Sunday. The play runs three hours with one intermission. Buy tickets for $50-80 online or by calling 847-242-6000.