Until The Flood by Dael Orlandersmith 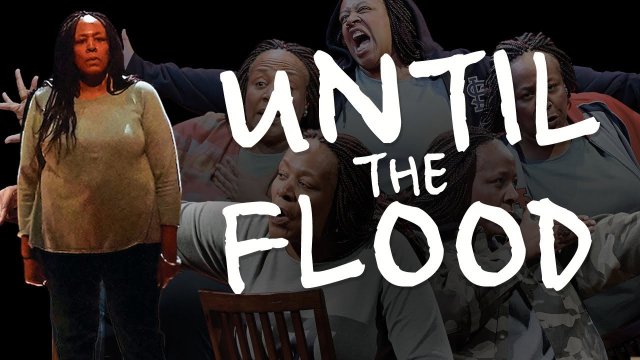 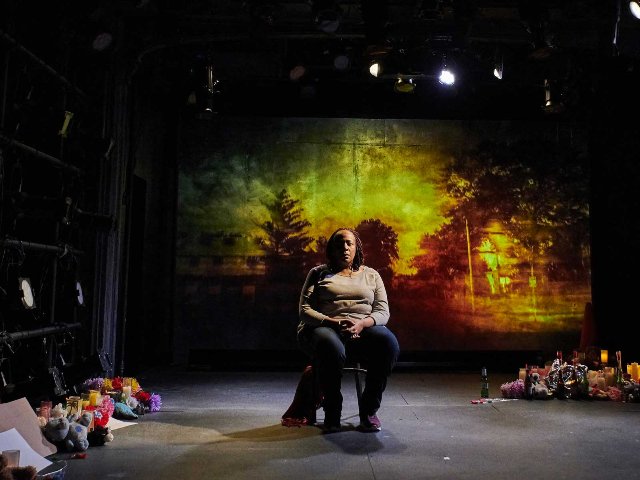 A reflective moment in the one woman show by Dael Orlandersmith. 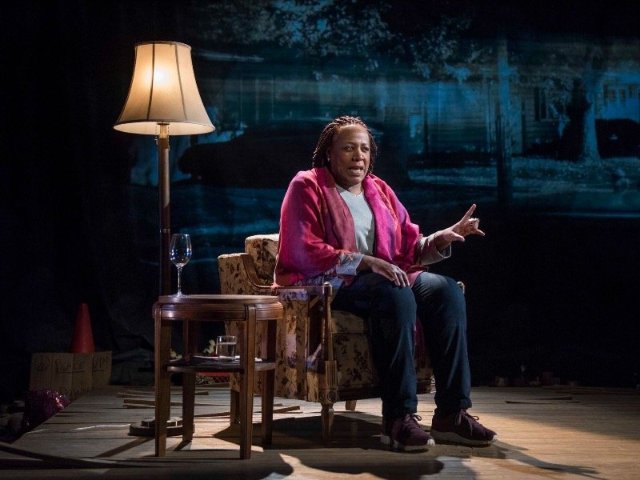 A retired teacher at home. 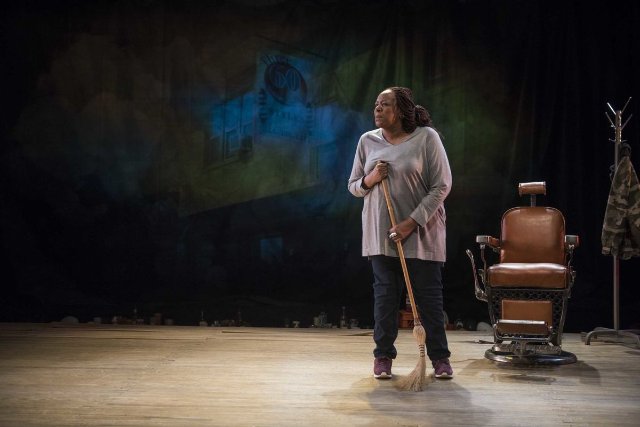 Sweeping up the barber shop.

Until The Flood is presented within a socio-political framework. The audience was invited to a pre-performance talk, by the understudy Trachel Yvette Green, about the origin of the play. She was followed by the director of the Milwaukee NAACP, who highlighted how an incident of disturbances in the city by white youths was treated differently from an incident of disturbances by minority youths. Needless to say that the police treated the latter more severely and so we entered the play's subject matter, race and race-relations in America - and the shooting of Michael Brown in Ferguson, Missouri.

Dael Orlandersmith appears on a stark stage surrounded by a number of chairs. Her props were limited to a broom and several pieces of clothing, in which she wrapped herself or took off in order to ‘become’ another person, black or white.

Orlandersmith had interviewed hundreds of people in Ferguson and in the St. Louis area in order to achieve representative composits of community members from young to old.

They were teachers; two high school students: one at wits end, the other just hoping to stay alive for another year in order to move to Berkeley, California, and study art history. The barbershop owner was proud of what he had achieved in life and the tough and racist electrician, also a landlord, was quite content with renting apartments in the black community to people he categorically disrespected. Finally, she spoke as a retired policeman and a Unitarian Minister, who offered to pray with or for a white policeman and a black National Guard Officer, who were standing ready during the riots in Ferguson. They accepted her offer.

Orlandersmith attempts to transform herself from person to person with stunning language and insight into people who are trying to just make sense of life and regain some hope for the future. She is African American, in her 60's, and so a ‘transformation’ into some characters is more believable, yet not essential. What matters, is the play’s overall impact.

Among other honors, she was a Pulitzer Prize finalist for Yellowman in 2002. The Director of the play, Neel Keller, is joining her journey currently. The St. Louis Repertory Theatre commissioned the play and its first production. Then it was shown at the Rattlestick Playwrights Theater in New York and will be seen after Milwaukee at Chicago’s Goodman Theatre and ACT, Seattle, on the West Coast. The bare-bulb, appropriate lighting and video for these performances were designed by Aaron Lichamer.

Leaving the theater emotionally charged the audience was invited to join in small groups for a facilitated dialogue, reflecting on the play and individual life experiences. Members from the Zeidler Center in conjunction with the Milwaukee Rep are sponsoring these group meetings, designed to deepen the evening's expressions and impressions.

The Milwaukee Rep Theater, beginning with Artistic Director, Mark Clements and Managing Director, Chad Bauman, and its entire staff has committed itself for several years now to better community relations and integration. They have printed the following text: ‘….The Rep will host over 80 community engagement events as part of The Neighbor Series. Our productions of One House Over, Until the Flood and Our Town invite conversation about what it means to be a neighbor. Our goal is to connect the stories on our stages to the stories of Milwaukee.’

As a part of its  engagement the Rep sponsored a weekend conference titled: Intersections Summit from March 23-25, which we attended. The company invited participants from more than 80 organizations and 30 states for further work in theaters that brings progress toward social, political and racial equity and justice.

Until The Flood – For whom is the play written? For all, who have not seen it yet.