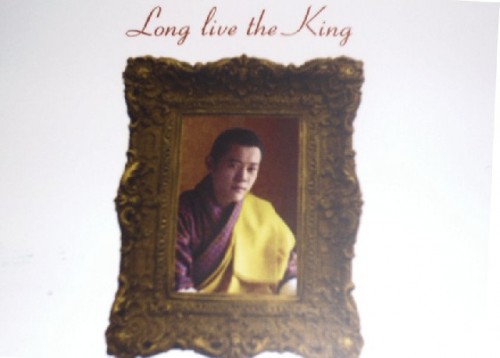 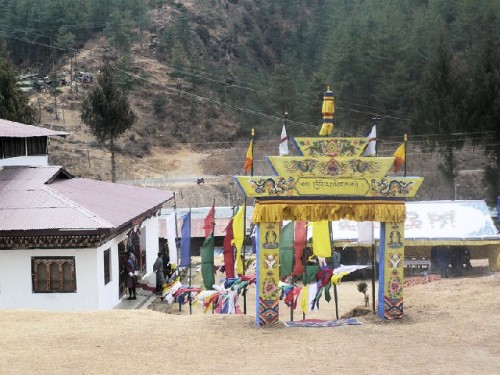 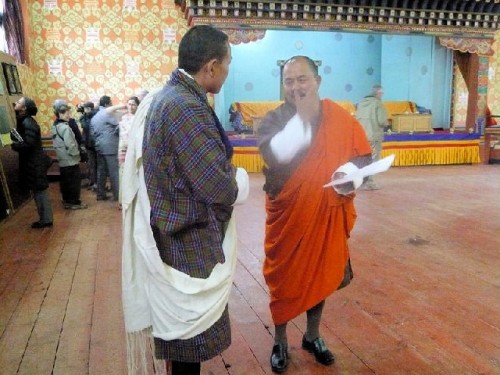 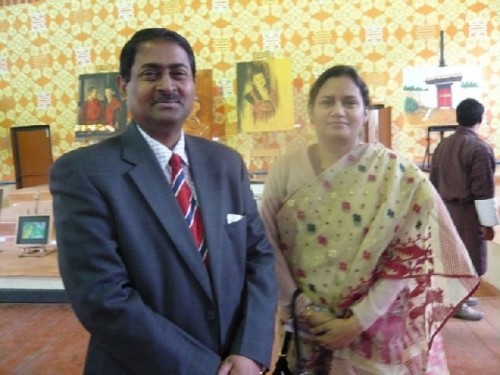 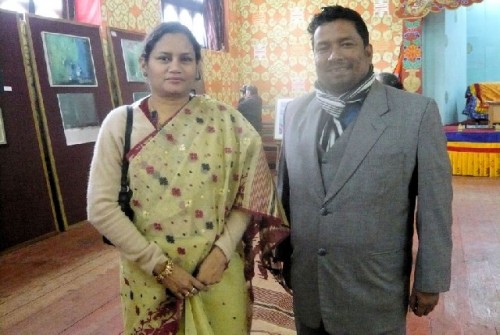 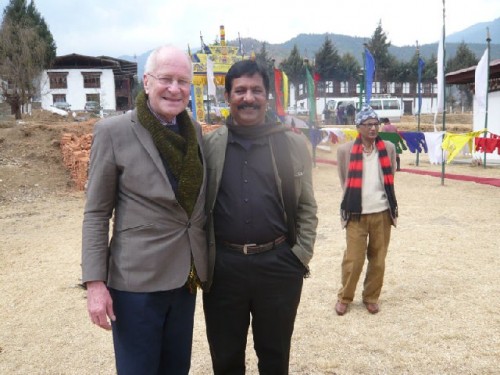 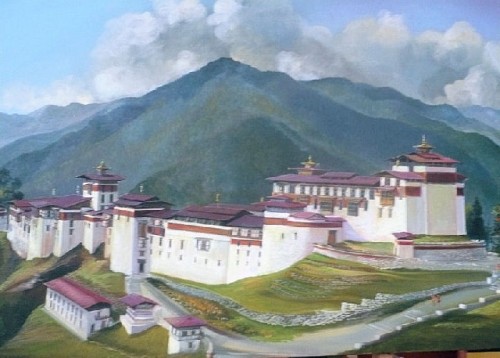 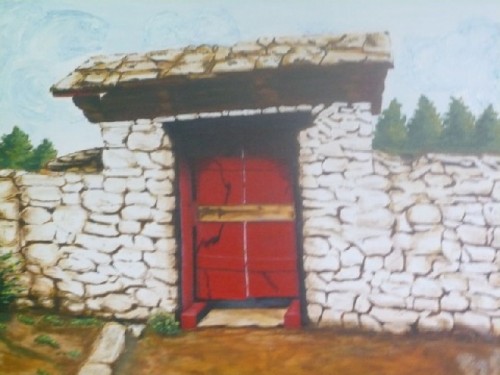 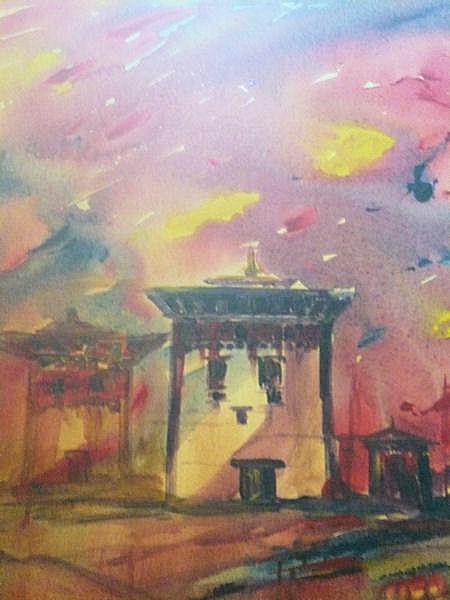 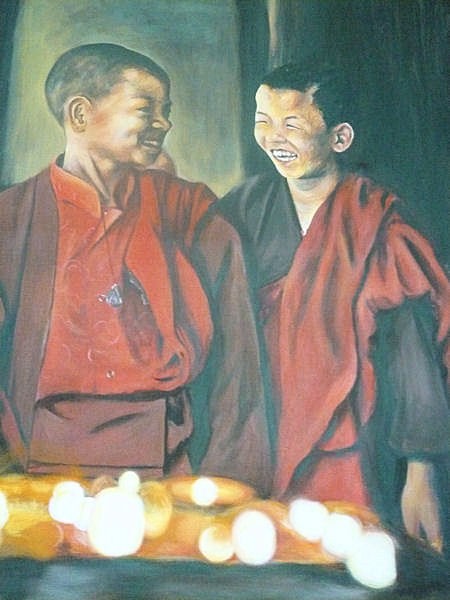 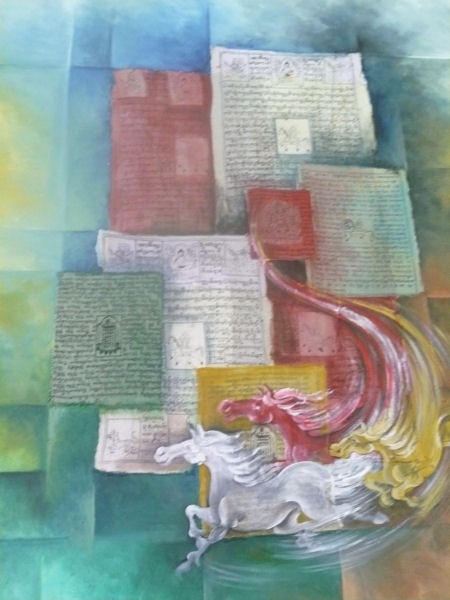 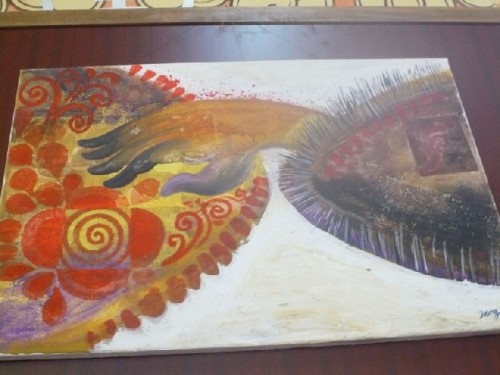 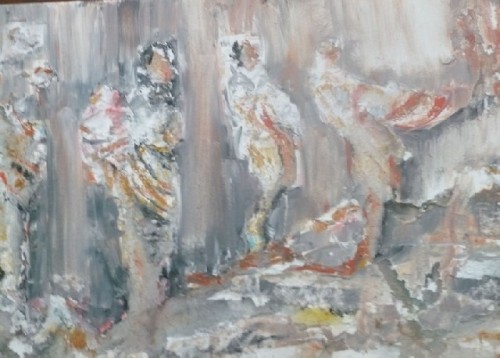 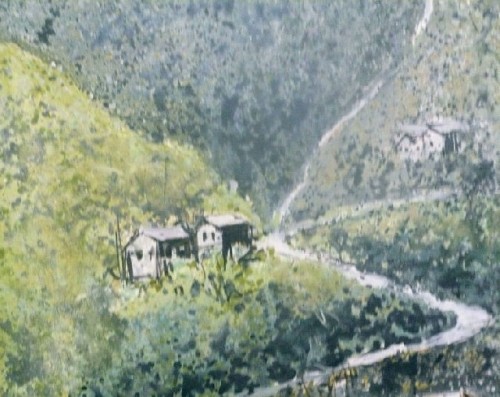 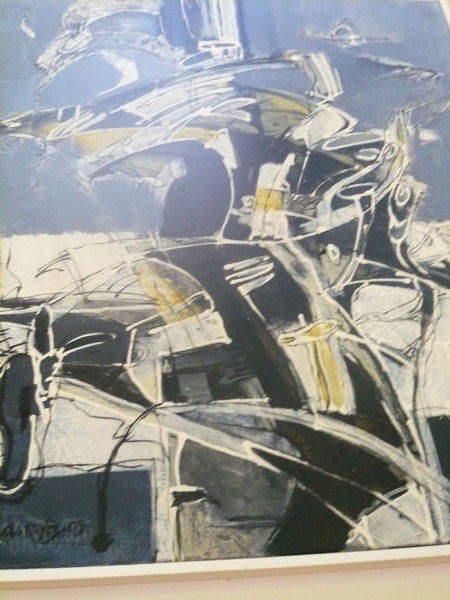 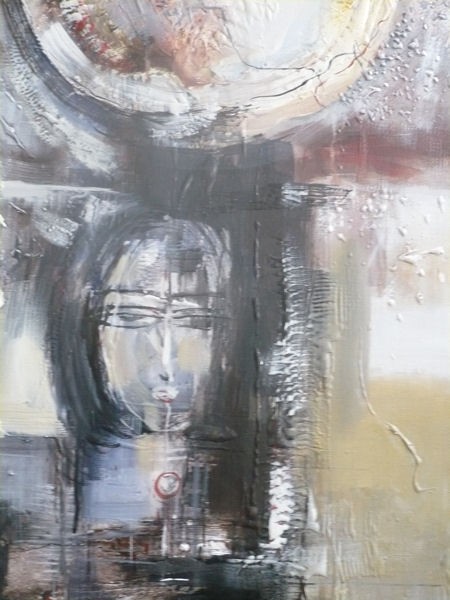 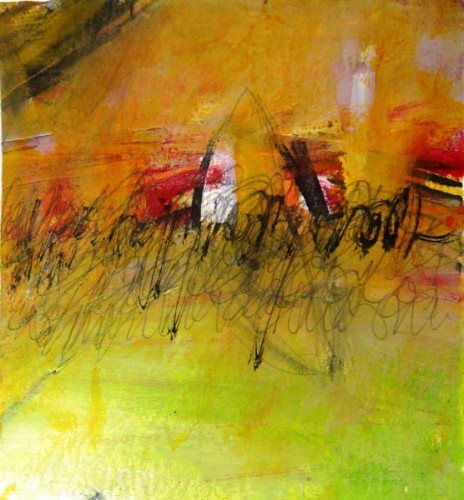 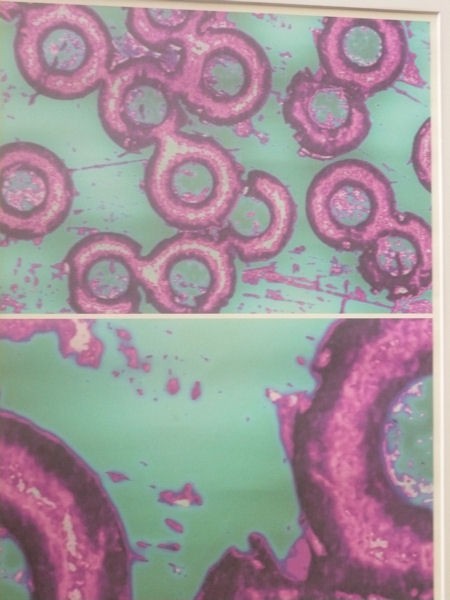 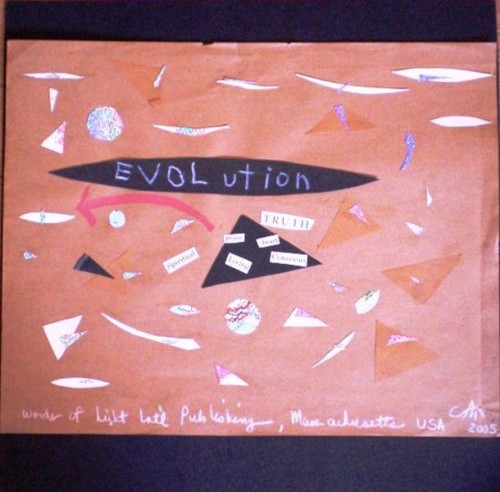 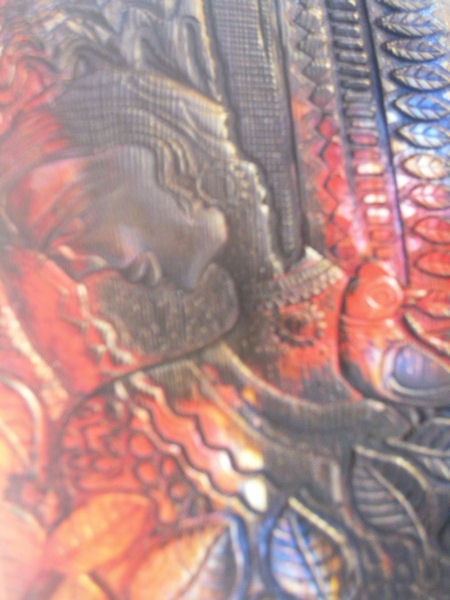 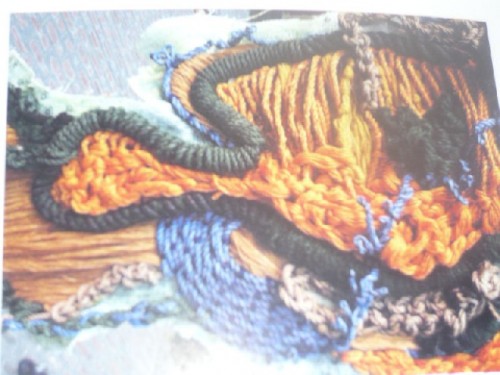 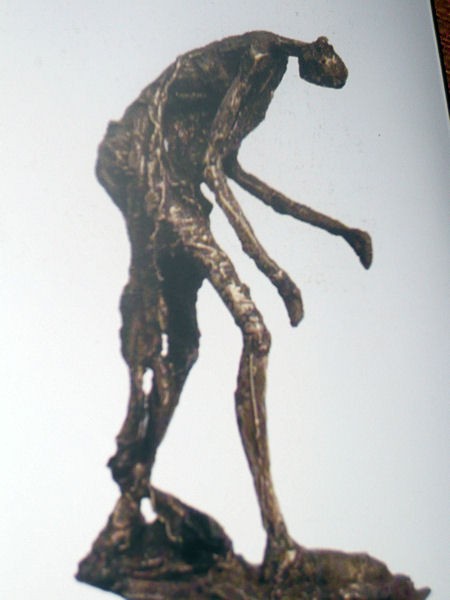 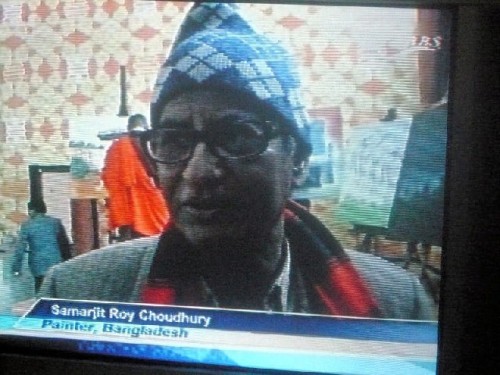 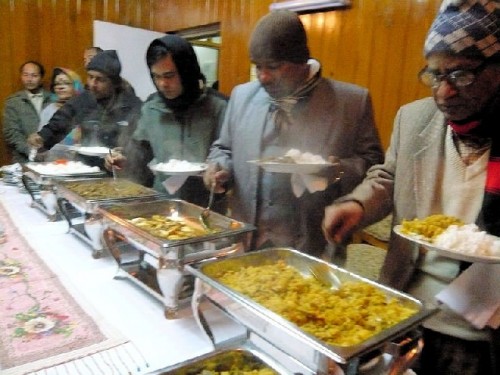 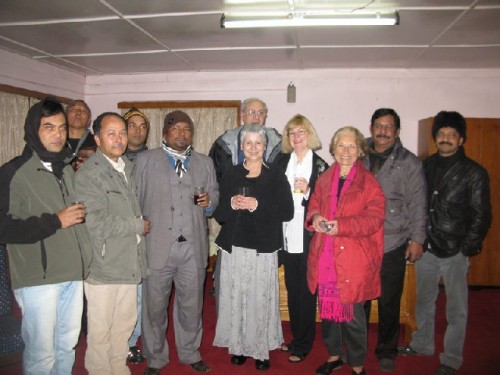 While on a tour of Asia, I received an e-mail notice from Astrid Hiemer alerting me to an art exhibition organized in Thimphu, Bhutan, by the Bangladeshi Embassy, along with the Bhutanese Ministry of Home and Culture, and Buriganga Arts and Crafts in Dhaka. Fortuitously, I happened to be in Thimphu, the capital city, on February 16, the day of the Grand Opening. Based on the enthusiastic response of my seven travel companions to my invitation, our tour guide rearranged the already packed day’s itinerary, making it possible for us to attend the opening at Rapa Hall, a major performance space and gallery in Thimphu.

The gateway to Rapa Hall was festooned in colorful flags, as the exhibition also celebrated the thirty-first birthday of His Majesty King Jigme Khesar Namgyel Wangchuck on February 21. The King’s birthday is honored with celebrations throughout this Himalayan kingdom over a three day holiday, during which all offices and schools are closed. Since my birthday was the day after the Grand Opening, I believed this lucky coincidence to be an auspicious sign for me, too!

Rafique Sulayman, the Bangladeshi curator of the exhibition, met me at the door and began introducing me to the various dignitaries present, including His Excellency Ambassador Imtiaz Ahmed and Mme. Daisy Ahmed, hosts of the event. The Chief Guest was Lyonpo (a title given to a minister) Minjur Dorji, Minister for Home and Culture, who was accompanied by seven other ministers of the Royal Government of Bhutan. Each minister wore a gho, a traditional outfit for men, and a kabney, or scarf that identifies a person’s rank, required for formal occasions, including visiting a temple.

As I talked to the organizers and met the artists, I began to understand the significance of this exhibition, which celebrated a Bangladeshi national holiday, called Shaid Day, on February 21. In 1947 the new state of Pakistan emerged on the world map, combining two distinct territories and cultures, Urdu and Bangla. When Urdu was made the official language of both parts of the country in 1952, unrest erupted in East Pakistan. The government used brute force to quell protests, killing many students who were defending the right to use their native language. Since then, the massacre has been commemorated each year on February 21, known as Language Martyrs Day. When Bangladesh finally gained independence from Pakistan in 1971, Bhutan was the first country to recognize the new nation, following the long struggle to preserve the Bangla culture and language.

February 21 was proclaimed the International Mother Language Day by UNESCO in 1999, in recognition of Language Martyrs Day in Bangladesh and in order to promote linguistic diversity through activities organized in member states. The annual occasion was also formally recognized by the United Nations General Assembly in 2008. The People’s Republic of Bangladesh observes this important historical day, both at home and through its embassies abroad. The 2011 exhibition was the fifth to commemorate Language Martyrs Day; the first was in Kathmandu in 2007, likewise during the tenure of Ambassador Imtiaz Ahmed, who has also served in Washington, D.C.

Curator Rafique Sulayman is eastern representative of the East-West Artists Association, founded by painter Dorothea Fleiss in Stuttgart. Through residencies, workshops, and exhibitions, affiliated artists share experiences, techniques, and wisdom, contributing to the wealth of international art and understanding.

The fine art exhibition consisted mostly of paintings, but also included collages, prints, mixed media, wood reliefs, tapestries, and several three-dimensional works. The paintings, in watercolors, acrylics and oil, ranged from Sukbir Bishwa’s landscapes, inspired by Bhutan’s Himalayan views and traditional architecture, to abstract works such as Dorothea Fleiss’s mixed media “Prayer for a Better World,” in acrylic and black Chinese ink on handmade paper. Christine Tarantino, who identifies herself as a visual poet, had a small collage, where words on bits of paper evoked a spiritual word play. Habiba Akther Papia’s small bronze sculpture, captioned “Sonata of Womanhood,” was a moving commentary on the plight of women. Many of these accomplished artists who had been able to travel to Bhutan were interviewed at the opening, which was well attended by media.

The opening reception featured an array of Bangladeshi delicacies, accompanied by non-alcoholic beverages. As we thanked our hosts for their gracious hospitality, they extended their invitation to include us in the reception for the artists in the evening at Bangladesh House, the ambassador’s residence. This was yet another opportunity to mingle with the artists in addition to seeing them on TV, where the show was billed as the biggest fine art event held in Thimphu.

Unfortunately, many of the participating artists were unable to travel to Bhutan because of the cost, even though they were offered free room and board upon arrival. They were also responsible for shipping costs, which limited entries to small-scale works. Would it be possible to initiate a travel fund to which artists could apply to participate in future exhibitions? The apparent camaraderie among the artists I observed at Bangladesh House was a proud moment for multiculturalism. These talented people were honored to be participating in the celebration of such a good cause. I cannot think of a better way of promoting international peace and understanding.

In closing, as I reflect on the sheer coincidence of the events that aligned during my day in Thimphu — the celebration of the King’s birthday, the observation of International Mother Language Day, and the commemoration of Language Martyrs Day — all within one day of my own birthday, I must reiterate my amazement — “What an auspicious occasion!”