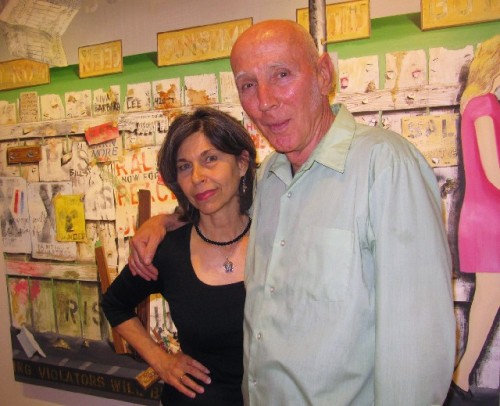 Cathy Wysocki and Wayne Hopkins during their opening at Gallery 51. 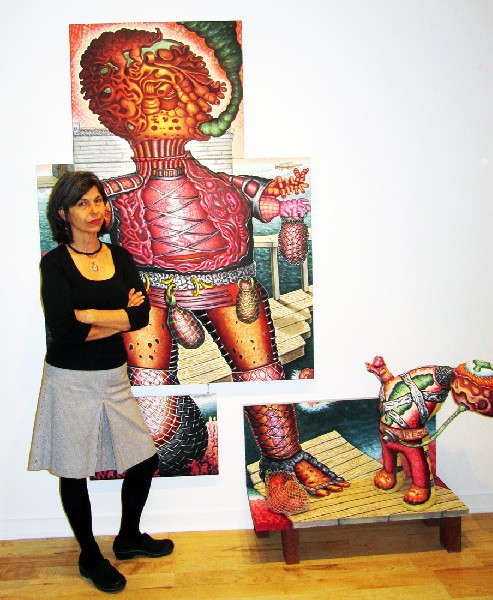 Cathy Wysocki with one of her complex creations. 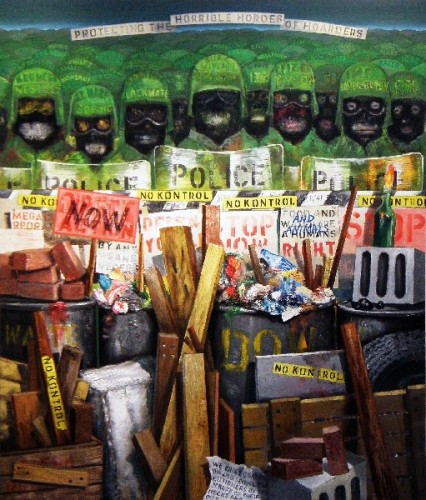 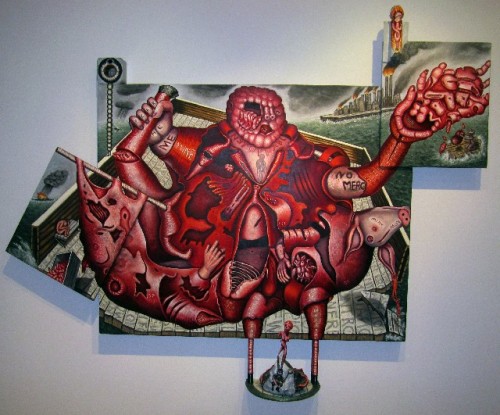 The cargo ship with toxic waste of El Bruto sank in the Gulf during the BP spill. 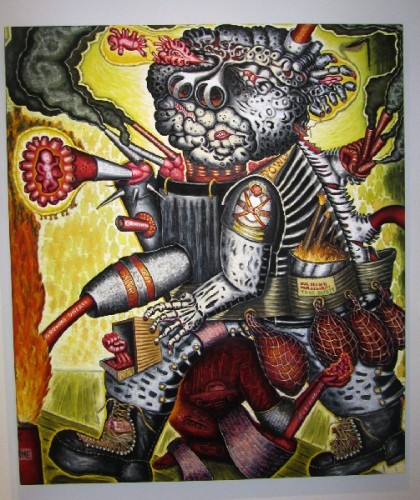 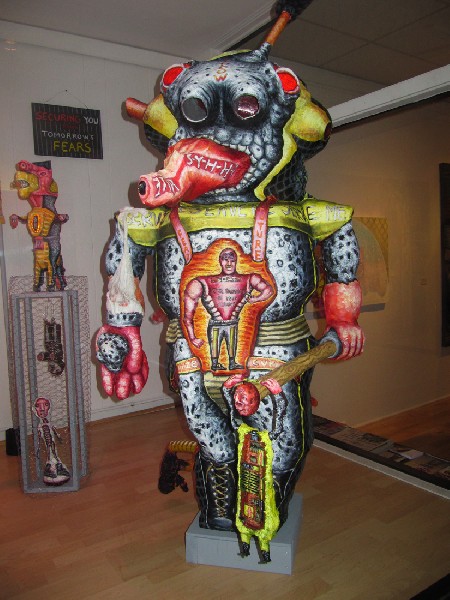 A 3-D Redato in the window of the gallery. 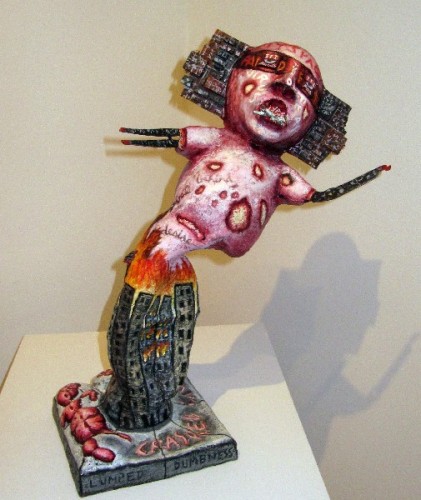 A removed lump may be the genesis of the lumplanders. 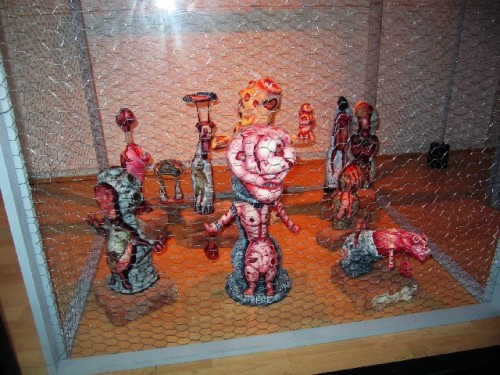 A group of quarantined Lumplanders. 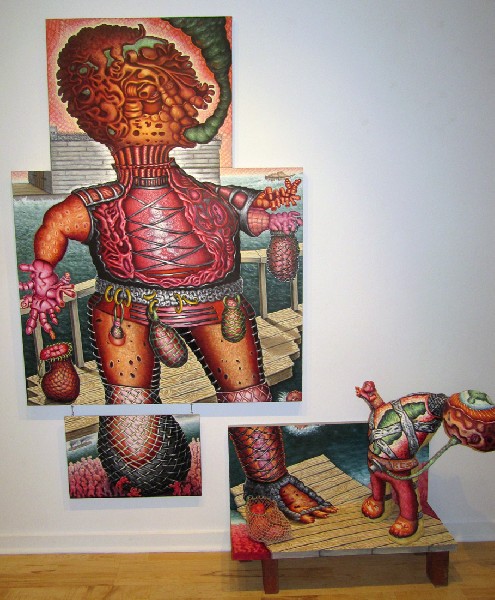 The multiple elements merge to form The Collector: AKA Bait Bags. 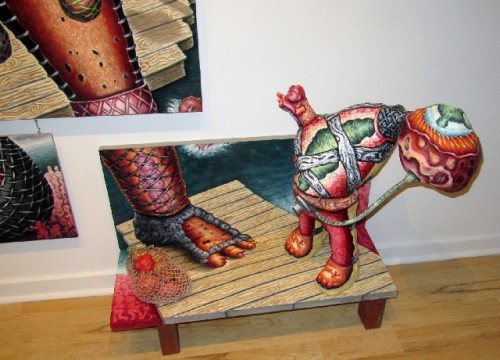 The foot of The Collector rests on its own shelf with a sculpture. 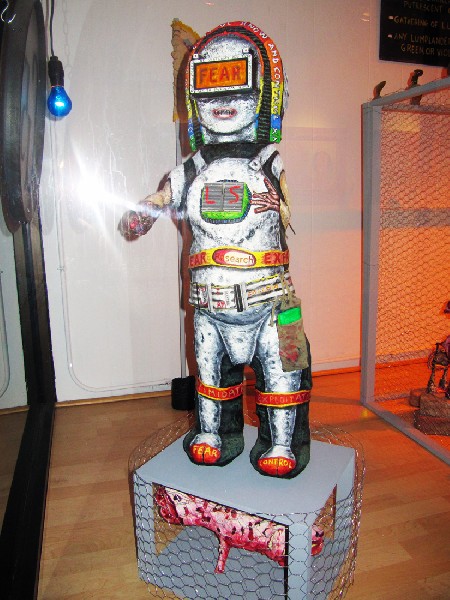 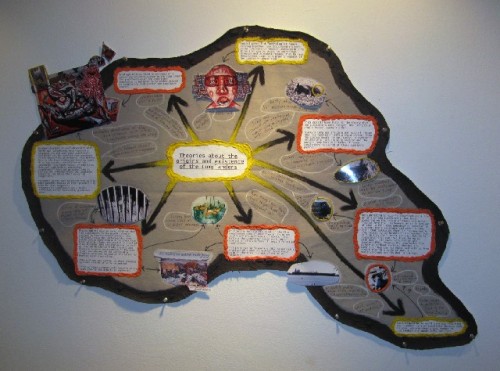 Scheme of the possible origins of the Lumplanders,. 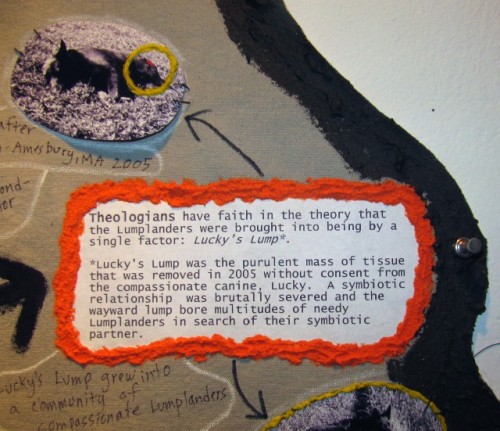 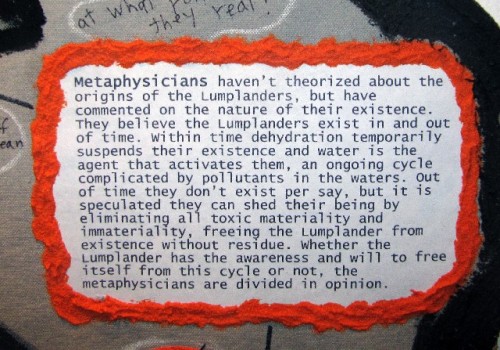 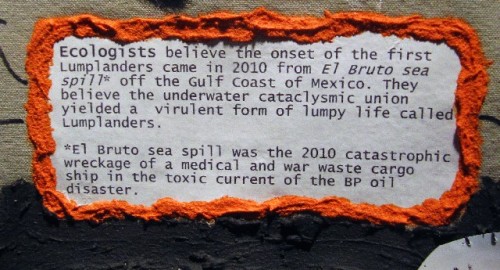 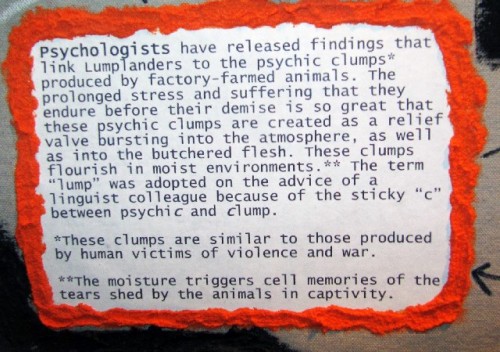 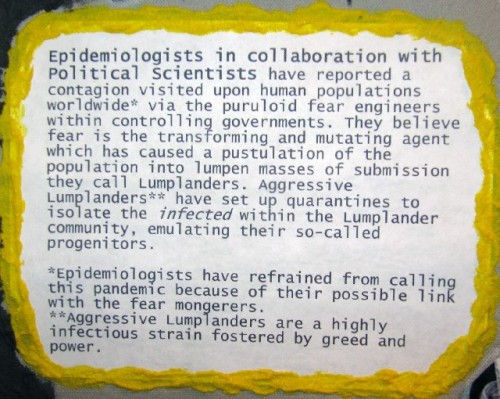 There is an explosion of politically and psychically charged imagery in the exhibition Strange Soup by Wayne Hopkins and Cathy Wysocki. They are relatively recent residents of the Eclipse Mill Artists Loft complex in North Adams, having relocated here from Albuquerque, New Mexico.

Works by the artists have been included in group shows at the Eclipse Mill Gallery and as a part of the annual Downstreet but this is the first occasion in which it has been viewed in depth.

Frankly, it has been a puzzle to me. The intentionality and agenda of the work takes more than a casual encounter. What comes with it is a complex agenda, back story, and coming to grips with an extreme world view with multi-valent associations.

It is empowering, however, to be challenged by serious, daunting work, unique, and arguably obsessed visions. In the context of work that one generally encounters in the Berkshires it is a leap beyond the norm of viewer friendly art.

There is more the sense that aliens have landed disrupting a bucolic garden party.

A raging bull has come crashing through the gallery taking no prisoners.

The impact is more like an assault or invasion than an exhibition.

It is also a surprise.

Years ago I knew Wysocki’s work when it was regularly shown at the former Zoe Gallery on Newbury Street in Boston. At the time it was one of the most progressive galleries in Boston and represented a number of interesting artists. When it closed I lost touch with Wysocki until now.

During the opening reception we discussed her outrageous paintings and sculptures. I started by asking if they were contagious? Was there the risk that being exposed to them would make one come down with an exotic disease.

Cathy Wysocki The Lumplanders  come from the Poisoned World.

Charles Giuliano Is this your world or one derived from literature?

CW My world. They are off shoots from a series The Poisoned World which I did from 2005 to 2010. It related to Greed, Hatred and Ignorance which are the three Buddhist poisons. Those poisons were manifested dominantly by war. Brutality, Cruelty all of that. Those paintings had sculptures on them and the sculptures since then have come out into the world.

El Bruto is the transitional one. When I made him I didn’t realize he was going to be one theory of how the Lumplanders came to be. He had a cargo ship carrying war and medical waste material. He had a wreck in the Gulf of Mexico in 2010 at the same time there was the BP oil spill. Mutants were formed. Ecologists believe that was when Lumplanders were first formed. There’s other theories: Metaphysicians, theologians, psychologists. This is a transitional piece because it is possibly the start of the Lumplanders. I believe that the Lumplanders could have been formed in all these different ways. It didn’t have to be in just one way. There was Lucky who had a lump removed and that could have mutated.

CG Which one is Lucky?

CW Lucky is a dog and she had a lump removed. There is a symbiotic relationship with the lump. Against her will it was cut off. She was never able to find it and died without finding it. The little lump formed more Lumplanders. They all searched for her and never found her. Theologians believe that is the only source for the Lumplanders.

This one is Redato who is also in the window. He’s an aggressor.

CG What is the motive for making these works? How do they function for you?

CW I see them as creating a world that reflects our own society and civilizations from the past. Will we possibly repeat all of those or will there be a spiraling out in other directions. That won’t be the same things that humans do to other living things.

CG How does the viewer, the gallery visitor, benefit from this experience?

CW You get to use your imagination. Your eyes have a lot to look at. The inner world can be rich and it can be manifested in the outer world.

CG How do you benefit?

CW I get to tell the story.

CG Can we discuss some of the art historical connections. There is an obvious relationship to surrealism, fantasy, science fiction, expressionism, Mad Magazine.

CW I never like to think about that. I like to see that after. My work has always been I do my own thing then try to make it better. The work that I like is after the fact. I kept away from learning too much about that. Living in the world I didn’t want to be influenced by other artists. I am more influenced by writing. I love Kafka and absurdist literature, existentialism. There is reality and absurdism and life really is that way. Surrealism? I guess there is that influence.

CG Do you have collectors?

CG Curators? Somebody thought enough of the work to have an exhibition.

CW I work in a vacuum maybe. No I don’t have a following. When I was in the South West, when there were juried shows, Mexican jurors tended to like my work.

CW I guess so. People always thought I studied Mexican art. I said no. Even in Boston they would say that. Maybe it has something to do with past life that’s in there. Spanish came easy. Maybe there’s a connection.

CG What kind of responses do you get? Do people say ‘Nice show’ ‘I really like your work.’

CW It’s been better than that today.

CG So they are curious and interested in your world.

CW Yes, some are and ask me about it. If they’re not interested they don’t say anything to me. That’s all right.

CG Do you put out a text and artist’s statement? Is there a user’s guide to the work?

CW No, no, no. There have been some good responses. When I had some pieces down in El Paso younger people generally like my work. There was a young couple. They came around the corner and looked at one of my pieces and said “Look at that.” They were really interested. I like that. I like the response where it’s different. They haven’t seen it. To some people it’s repulsive. That’s ok.

CG I like the fact that you are working in 2-D and 3-D simultaneously. Did you have any training in object making?

CW In terms of my schooling I took some art classes but it was always pretty much follow my own thing. In California. One teacher just dealt with her dreams and did sculpture. Another, who was real out there, said Cathy just do it. So I never had real technical training at all. That’s fine. When I need to find out something I do it when I need it. I just like to do my own thing.

CG Take this piece. What is it called?

CW The Collector: AKA Bait Bags. This character used to work for Redato. He used to collect lumps. Kind of pre-Lumplanders. He would collect them in bags and then turn them into submissives. But this one turned around and said, ‘no, I can’t. I can’t be part of that anymore.’ So now he’s a compassionate one. He collects them but lets them form and become more independent. He’s trying to get a group together which will take off and go away.

CG In the way that the image is formed is quite complex. It is created by joining several separate panels and then the leg comes down and ends on a shelf with a sculpture attached. There are a lot of technical problems involved in forming the piece. How difficult was it to create this?

CW Intuitive. That had a whole lot of other panels. They ended up being sanded and turned into other paintings. The shelf section was going to be on its own. It evolves. Well. Am I going to attach that? How am I going to do that?

CG It all seems to work.

CW It looks easy but it’s not. I did this since we’ve been here so it probably took several months. At one point it probably had about ten pieces. That sculpture was formed but was going somewhere else. It’s made with Papier-mâché with some rocks on the bottom. Then they are painted.

CG Thanks for sharing these insights about the work.