One House Over at Milwaukee Rep 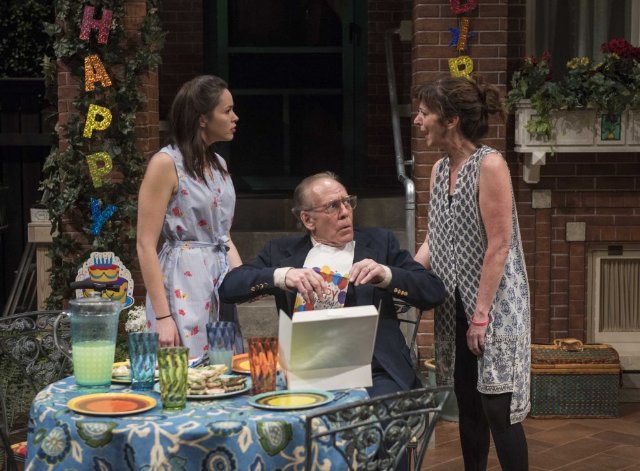 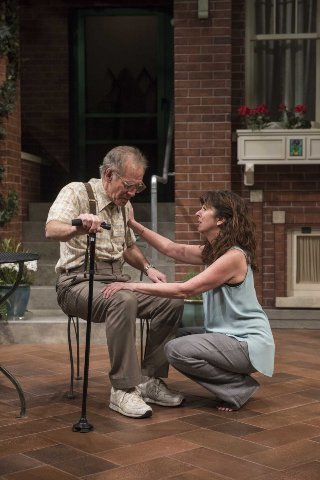 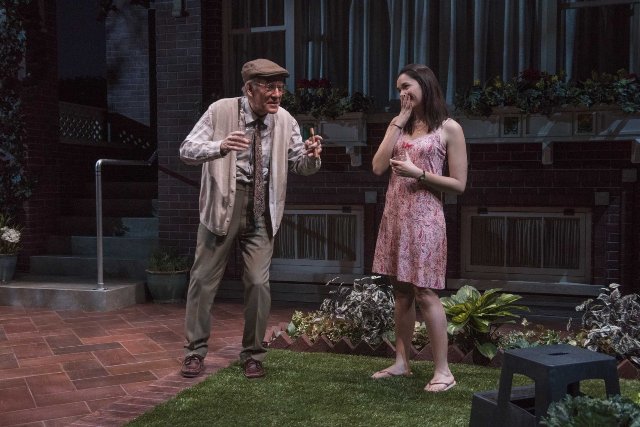 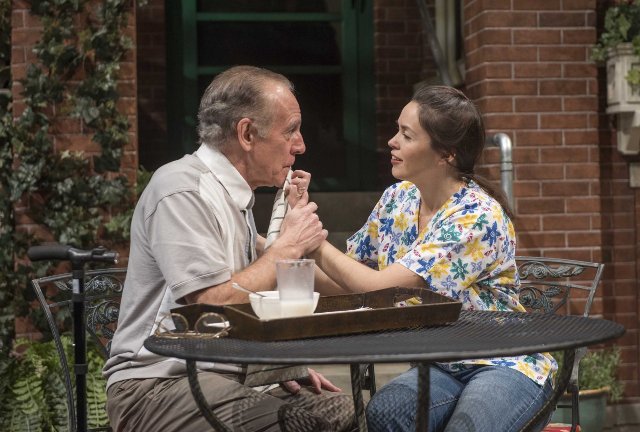 Bonding between Milos and Camila. 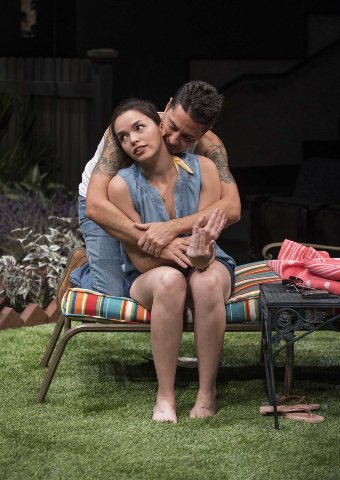 The undocumented couple struggling to survive under the radar.

During the Intersections Summit conference convened by Milwaukee Repertory Theatre we attended one of  the final performances of a world premiere of One House Over by Catherine Trieshcmann. Its focus on the struggle of an undocumented couple of Mexican workers reflecting the mandate of social justice theatre which was explored in depth during the three day conference.

In the largest of its three theaters, with some 600 seats, the play was given a stunning and technically polished production. The house referred to in the title was elaborately detailed. It signifies a compact, middle class home in a community located in a suburb of Chicago circa 2010. The home was brightly illuminated by Jesse Klug and there were appropriate sound and musical elements created by Joe Cerqua.

There is meticulous attention to detail in the scenic design of Kevin Depinet. This includes such plot points as the articulation of a basement apartment which provides part of the living arrangement for Camila Hernandez (Zoe Sophia Garcia). She is a care provider, underpaid in cash with no benefits, for the elderly and cantankerous, Holocaust survivor Milos Vancura (Mark Jacoby).

The set includes a small, well tended garden where Joanne Vancura (Elaine Rivkin) has encouraged Camila and her husband, Rafael (Justin Huen)  a cook in an Italian restaurant, to enjoy when not working,

The intent is a variant of mi casa es sue casa until boundaries are crossed. Joanne, who gives violin lessons to youngsters, is upset when Camila is visible from the studio window sun bathing in a two piece bathing suit. There is also the issue of what happened to the basil plant a sprig of which Rafael has taken to the restaurant.

Well into the first act a nosy neighbor Patty Leiker (Joanne Paulsen) pops in from “One House Over.” It is assumed that she will be the whistle blower bringing a tragic twist to the vulnerable status of the undocumented couple. She harasses Joanne about violating the rule against renting and that she will report this infraction to the head of the neighborhood association.

The threat of a nosy neighbor, however, proves to be a false positive. It creates dramatic tension, however, as we learn of the looming threat of deportation and its resultant emotional traumas.

There is much to like about this bright and engaging drama which has been precisely directed by Mark Clements. You feel that he got the best from the actors but ran up against the limits of the writing of Catherine Trieschmann. The characters do not feel fully developed and plot points are implausible and somewhat contrived.

This is a work in progress which needs an edit and sharper writing. During the conference we learned of strategies for funding rolling world premieres in which new works are given at least three separate productions. It travels to Rochester’s Geva Theatre Center opening April 3 with the same cast and set.

The essence of the play entails the fragile status of Camila and Rafael. Most of the laughs and energy of this production, however, derive from the scenery chewing antics of the hilarious Jacoby as the elderly, frail but feisty Milos. He’s a piece of work.

Initially, he wants nothing to do with Camila who must patiently endure his cranky lack of cooperation. He refuses to eat the meals she provides for him. In a predictable reversal he comes to depend on and adore her. In a divisive final confrontation he prefers Camila to his own daughter. While this contributes to dramatic tension it’s over played and less than plausible.

Similar folderols develop between Joanne and Rafael. We never quite know who they are. Joanne it seems is a single mother but the son is off somewhere. We don’t come fully to understand the relationship with her father. Presented with some stereotyped machismo Rafael is impetuous, reckless and self destructive. He has told the boss to shove it and takes risks by driving the family car without a license.

Having spent all of their lives in the U.S. Camila is tired of living under the radar and longs to see her family in Mexico. Perhaps they can save money and Rafael can open a small Italian restaurant back home in Guadalajara. Lacking papers and passports they have never visited the land of their birth.

There is a stretch of a scene when Joanne comes into the yard to smoke a joint while Rafael is chilling with a beer. Crossing all lines, and initiating a rift with Camila, they get stoned together. It is revealed that Joanne has just been diagnosed with breast cancer.

Building on their catapulted mutual interest the balloon is floated that Rafael might be employed as her care provider. He will do the grocery shopping, cook gourmet meals, and drive her to chemo sessions. You may well imagine how that plays out.

The second act spins out to a topsy turvy and unresolved conclusion. It revolves around the 90th birthday party for Milos which is the flash point for a total meltdown. Having failed to create convincing threads, or plausible characters and relationships, Trieschmann has opted for an explosive, shattering conclusion.

This is a play that we really wanted to like. It has an ambitious approach to the palpable fears and social injustice of undocumented workers. Hired as a professional care provider it resonates when Camila pushes back as Joanne tasks her with do this or that. “I’m not you maid” is the thought provoking response.

It underscores the crucial need for dignity and respect. All too often undocumented workers are virtually invisible to employers. All of the initial hospitality when Joanne was hiring Camila, in the long run, proved to be just the usual phony baloney.

The vignettes developed in this ambitious play contribute to a difficult, poignant and tragic national dialogue. There is a lot to build on.