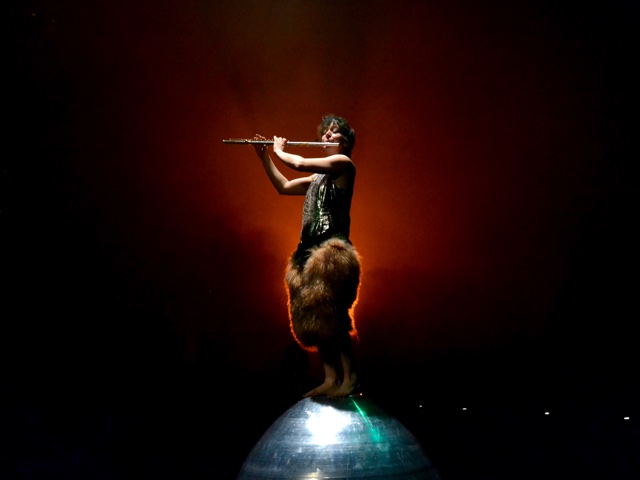 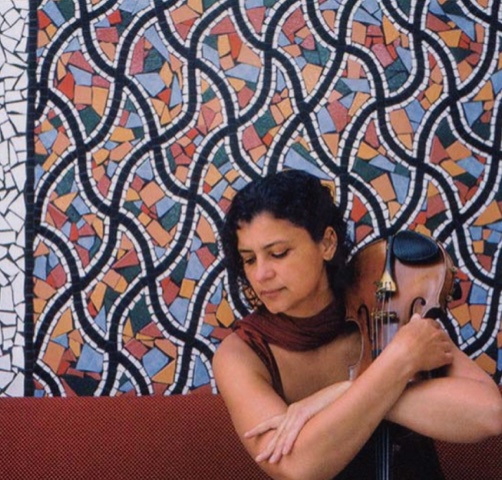 Iva Bitova, magician on violin and in song Luisa Muhr presents at Mannes 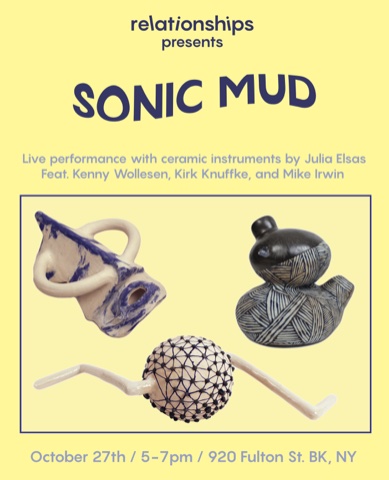 The richness of music programming at the Mannes School, now a division of The New School for Social Research, is clear day to day.

Each event features three women/non-binary artists and/or their groups and a talk-back after the sets where audience members have the opportunity to engage with the artists. Muhr’s mission is to provide a platform for and encourage dialogue between strong, diverse women/non-binary artists, often to be found in the avant-garde/experimental, who push boundaries and work "between" disciplines.

The New School has several venues in several buildings.  The Glass Box faces out on 13th Street with ceiling to floor glass windows, opening up performance to the outside world.  It is the permanent home of Stone, founded in 2005 by John Zorn. This afternoon the glass was cloaked in red velvet curtains, perhaps to dampen the already bright sound of the room a bit.

Music is always performed, but how it fits into other disciplines is surprising work to work. With curtains drawn to let darkness take over, Claire Chase doubles on flute and as a vocalist. She is up close to us. We are swept into her tangled being and drawn to her sounds.

It is no surprise that Chase opened with selections from the Death of  Pan by Marcos Balter.  She is a star, but her stardom grows out of collaboration. Chase turns up everywhere her presence will be a help.  As Esa Pekka Salonen takes over the San Francisco Symphony, she is named a collaborative partner.

Pan is operatic in scope, moving from playful moments to deep howls of pain.  These are the last moments of Pan’s life before he is executed. Originally created for 65 players, Chase explains,  “This version takes all of the energy and a lot of the sound of this massive version  and distills it into an electronic track and just little me.” She winks,  other sounds and bodies are conjured up.

Chase performs on her flute, around her flute and writhing about it. We not only hear her specially beautiful instrumental tones but singing and vocalise which embraces sounds representing the ugliness of  death throes.

“It’s somewhere in between performance, performance art and ritual,” Chase adds. “I don’t know really how to describe it yet because it’s so new. We individually sampled every one of these sounds, thousands and thousands of sounds, and then meticulously layered them on top of one another. Everything’s automated, so there’s zero room for error. But I really love the challenge, and I just hang on for dear life.”

It was a dear musical life she shared with the audience.

Second up is Iva Bittová, a Czech violinist, singer, and composer trained in Brno Czechoslavkia,  hometown of Gregor Mendel, Leoš Janácek, and Milan Kundera among others.

Her work these days is mostly focused on playing violin and singing, but she is still strongly influenced by her background in acting and dance. Moravian, Slovak and Roma folk melodies are the jumping board for her music.  This is a rare kind of music that balances tranquility with moments of dissonance.  Curiously, as structures are offered up, they soothe.

Bittová sings, not only with her voice, but with her entire body, her face, her hands and her feet. An expressive singer, she often changes from low to high pitches and sometimes abruptly stops. The sound of her voice and violin move with her as she stomps, swivels and moves her hands. She is joined by Muhr, singing beautifully. They play, dueting with each other, friendly and relaxed. They can be taut too.

Using the tools of violin and voice, Bittová elicits a rainbow of colors, moods, and brushstrokes, always deepening our awareness.

“The violin accompanies me all the time,” says Bittová. “It is a mirror reflecting my dreams and imagination.” Yet she is, above all, a singer. Whether through voice, her bow, or physical gesture, her sounds magnify and recede, sometimes guttural, and at others birdlike. Here is an artist who builds with many parts: her presence is the center of her practice.

Bittová’s articulation of sounds and words doesn’t just sit on top of the music; it connects deeply with it as another kind of music. She doesn’t exactly sing, but she also doesn’t recite over the music—her voice is half instrument, inside the music at all times.

Sonic Mud used homemade instruments, flutelike, and dreamlike, sometimes stems and at others, gourds. They are museum pieces created not just to look at but to hear.  Jangles of a jar keep the underlying beat for the first half of the piece. A horn creates new breath, but also tunes.  Chimes or various lengths are brushes and caresses.  A sort of xylophone tinkles throughout.

A rich afternoon of sounds. familiar and not so familiar, of instruments we know well and those we have never heard before, often beautifully crafted.  Muhr gives us a chance to stretch out ears and minds in these special performances.