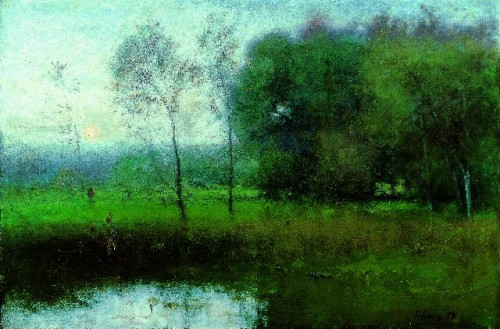 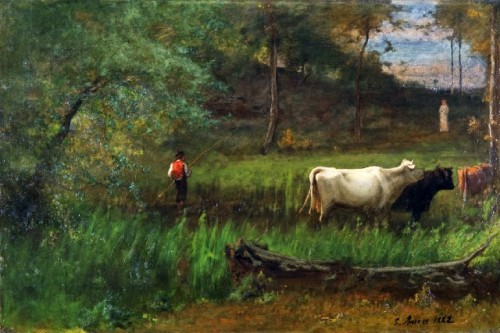 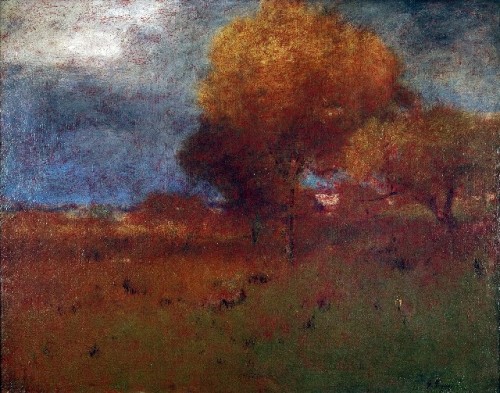 The Sterling and Francine Clark Art Institute announced that it recently received a significant gift of art from New York-based collectors Frank and Katherine Martucci, including an important group of eight paintings by American landscape painter George Inness.

The gift of eleven paintings and five drawings was accepted by the Clark’s Board of Trustees during a meeting in March and represents one of the more significant donations of art to the Institute since its founding. The Martucci collection also includes fine oil paintings by Eastman Johnson and Gaston Latouche, as well as a magnificent early watercolor landscape by Piet Mondrian and five works by nineteenth-century Italian genre painter Mosè Bianchi.

The Clark will present the eight Inness landscapes in an exhibition, George Inness: Gifts from Frank and Katherine Martucci, which will be on view June 9–September 8, 2013. The presentation will unite the new acquisitions with two works by Inness, Wood Gatherers: An Autumn Afternoon and Home at Montclair, that were purchased by Sterling Clark and have been a part of the Institute’s collection since 1955.

“George Inness has no greater contemporary advocate than Frank Martucci, who has studied Inness’s aesthetic philosophy, assembled a wonderful collection of his work, and supported the publication of the complete catalogue of Inness’s work in 2007,” said Michael Conforti, director of the Clark. “Frank and Katherine’s extraordinary gift is not only generous, but it's especially meaningful to the Clark. As we prepare for the reopening of our museum galleries next year, it is very exciting to contemplate the added depth these works by George Inness will bring to our American paintings collection, focused on the two other great painters of the late nineteenth century America, Winslow Homer and John Singer Sargent.”

The addition of the eight Inness paintings will “enrich the special nature of the Clark’s collection,” Conforti said. “Paintings like New Jersey Landscape and Green Landscape are beautifully conceived and rendered canvases that invite the intimacy of looking closely at art, which is so central to our visitors’ experience of the Clark.”

Frank Martucci began collecting works by Inness in the early 1980s, drawn to the artist’s commitment to use his paintings as a means of extending his spiritual interests. Through the Martucci Foundation, the couple funded the research and publication of the catalogue raisonné of the artist’s works by noted Inness scholar Michael Quick.

“Inness takes us beyond in the canvas in a unique way,” Martucci explained. “He was an absolute idealist and shared Ralph Waldo Emerson’s belief that there are intuitive ways in which to perceive the world which transcend the experience of our five senses. His landscapes are intended to capture that world beyond, and to become missionaries for this spiritual expression.”

Martucci loaned Inness’s New Jersey Landscape to the Clark’s 2008 exhibition Like Breath on Glass: Whistler, Inness, and the Art of Painting Softly, and credits the experience of working with the Clark’s curatorial team for deepening his connection to the Institute. “The sensitivity of that show and the way in which the Clark handled the exhibition impressed me, and our friendship has continued to grow over time,” he said. Mr. and Mrs. Martucci are members of the Clark Society and Mr. Martucci serves as a member of the Clark’s Director’s Council, an advisory panel of noted arts leaders.

“We are so happy to have the Innesses at the Clark as we know that this is a museum that will appreciate them and will show them,” said Martucci. “The timing of making this gift now, at a moment when the Clark is planning its new gallery spaces, is very good, because it feels as if a perfect stage is being constructed that will allow the works to be seen in the best possible situation.”

Conforti noted that the Clark is “deeply appreciative of Frank and Katherine Martucci’s generosity and knows that future generations of visitors, students, and scholars will benefit from their decision to entrust these works to the Clark’s stewardship.”

The eight landscapes by Inness represent an excellent survey of the artist’s late work. The paintings range in date from 1880 to 1894, the year of the artist’s death. During this period, Inness moved from the open-air painting and naturalism of his early career toward a more conceptual approach to capturing mood and the play of light and shadow. His dedication to the teachings of the Swedish philosopher Emanuel Swedenborg provided him with specific spiritual concepts that guided his depictions of nature. Wanting to do more than simply record nature, Inness experimented with color, composition, and painterly technique in an attempt to present a vision of the natural world beyond its materiality. His ethereal handling of paint creates the hazy atmospheres, soft forms, and baths of color that reveal his attempt at formal unity intended to evoke the harmony of the physical world and a sense of higher truths. These paintings brilliantly express the aesthetic and spiritual vision sought by Inness during this key period.

The majestic watercolor Farmstead along the Water Screened by Nine Tall Trees [c. 1905, watercolor on paper, 21 1/8 x 29 1/8 in.] by Piet Mondrian exemplifies the early work he executed in the Netherlands before leaving for Paris in 1911. The pastoral subject, muted palette, and deft brushwork reflect the artist’s connections to The Hague school of naturalistic landscape painting in Holland c. 1900. Mondrian’s inscription on the verso indicates that the scene depicts a farmhouse along the Gein River, south of Amsterdam. Drawn to the rural simplicity of the region, he created a series of similar motifs during this period with an emphasis on the subtleties of light. Around the time Mondrian produced this watercolor, he was beginning to experiment with the tension between abstraction and representation. Given his future development into pure, gridded abstraction, it is possible to see how the veiled description of trees, buildings and water reflections prefigure his later shift.

A Prisoner of the State [1874, oil on board, 26 1/2 x 22 in.] by Eastman Johnson is one of two paintings based on literary subjects Johnson painted in the mid-1870s and was exhibited at the National Academy of Design in 1874. Johnson’s career stretched from the second half of the nineteenth century to the early years of the twentieth. He began his artistic training at a lithography press in Boston, and in an effort to broaden his artistic training, Johnson left for Dusseldorf, Germany in 1849, where he spent two years in the studio of an American expatriate. After another four years of study in The Hague, Johnson returned to the United States in 1855, refocusing his practice on portraying aspects of contemporary American life. The range of his projects—from formal portrait commissions and paintings of urban interiors to rural genre scenes—reinforces Johnson’s reputation as a chronicler of American culture.

Depicting an encounter in a vestibule of an opulent Parisian apartment, The Suitor [1900, oil on panel, 31 3/4 x 30 in.] by Gaston La Touche is a fine example of the intimate interior scenes he developed during his mature period. On the right, a woman in loose robes extends her hands to a shadowy male figure who kisses them on his way out the door. La Touche depicts this fleeting moment in a symphony of warm tones that create a soft, enchanting atmosphere. The early phase of La Touche’s artistic career was influenced by the realism of artists like François Bonvin and Jean-François Millet, despite the growing force of the Impressionists in Paris at the time. His realist paintings from this early period were rejected repeatedly from the Salon, earning La Touche little critical recognition. Around 1890 Félix Bracquemond, the well-known painter and engraver, persuaded the younger artist to forgo his typically somber palette and dark realist scenes in favor of lighter, more impressionistic tones. As a result, La Touche’s work from 1890-1913 incorporated a wide range of subjects, including interiors, fountains, fireworks, gardens, parks, fantasies, and scenes of Paris in a spectrum of colors.

Mosè Bianchi began his career as an academic artist in Milan, creating altarpieces and paintings of historical subjects. In the course of his studies, he traveled to Venice, Rome, and Paris, and upon his return embraced avant-garde shifts toward naturalism and realism. The free brushwork and bold palette that are evident in this group of works mark his developing style. His subjects widened to include genre scenes and sensitive portraits, often featuring women. The five works given to the Clark by the Martuccis provide a good sense of Bianchi’s work, both technically and thematically adding a new dimension to the Clark’s collection of nineteenth-century Italian art