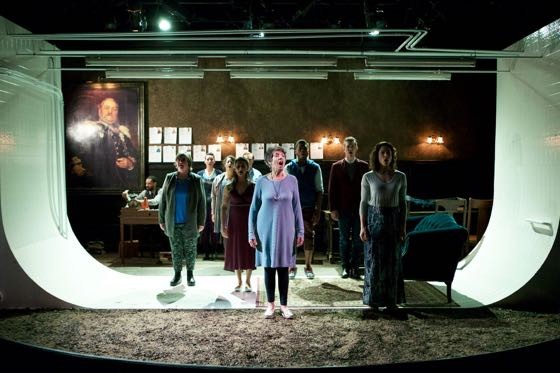 Time and measurement are of the essence in Sideshow Theatre's new production of Anne Carson's Antigonick, described as freely translated from Sophocles' original Antigone. Throughout the 75-minute production, a mute character named Nick (David Lawrence Hamilton) is on stage, by turns taking measurements with a tape, keeping time with a metronome and taping up information sheets that enumerate the dead. Nick is constantly busy.

Carson's translation, or reimagining, is witty and colloquial with clever wordplay and literary allusions. (Kreon announces his nouns and verbs for the day. We're asked, What is a nick of time?) Antigonick moves along briskly, allowing us little time to ponder the questions of morality vs. patriotism that it presents. But those are the ideas that the play will leave you with, ideas that resonate and trouble today as much as they did millennia ago.

The play follows the plot and theme of the classic version. Antigone, daughter of Oedipus and Jocasta (his mother and wife, you will remember), learns that her brothers Eteokles and Polyneikes killed each other in battle. But Eteokles died a hero fighting for his own country and thus will be buried with honors, while Polyneikes fought with the Argives and his body will be allowed to "lie unwept and unburied," according to the edict of Kreon, king of Thebes. Antigone refuses to abide by this edict, and tries to enlist the help of her sister Ismene.

Ismene reminds her of the tragic history of their family. "Wherever we are, think, Sister -- father's daughter. Daughter's brother. Sister's mother. Mother's son. His mother and his wife were one. Our family is double, triple degraded and dirty in every direction. Moreover, we two are alone and we are girls. Girls cannot force their way against men." And Antigone responds, "Yet I will."

You'll notice that the actors performing the roles above are not credited in the above plot description. That's because each role is double-cast, and in fact, the entire play is performed twice, by two different casts, with plenty of gender-bending casting choices. Only the first cast is credited in the playbill, and so the audience is surprised when, after what seems like a last word from Choragos (the Chorus), we realize we're hearing the entire dialogue from the beginning, but spoken by different actors. The first words of the play are our clue, 40 minutes in:

Antigone: We begin in the dark and birth is the death of us.
Ismene: Who said that?
Antigone: Hegel.
Ismene: Sounds more like Beckett.â€¨
Antigone: He was paraphrasing Hegel.

Virginia Woolf and Bertolt Brecht are name-checked too.

Jonathan L. Green's direction maintains the beat of the metronome and measures out the tragedies that befall the family in both versions. Yu Shibagaki's minimalist stage design is practical for the small space, with sidewalls suggesting a skateboard park. A large portrait of Oedipus, in a uniform that would have suited a South American general, looms ominously over the stage. Noel Huntzinger's costume choices are contemporary but work timelessly.

The acting is very strong throughout the story. Ann James is a powerful Kreon and then a sad but determined Antigone. Anu Bhatt is a fine Antigone and later an eloquent Choragos. Lona Livingston is first Choragos and later Teiresias, the blind prophet. Eleni Pappageorge plays both Ismene and a guard. Kreon's wife, Eurydike, has one important speech, which is performed well by both David Prete and Maritza Cervantes.

Playwright Carson is a Canadian poet and classics professor. She was awarded the MacArthur Fellowship or "genius" grant in 2000. The script itself is a minor work of art in graphic novel form. The entire text is handlettered and full-page line drawings are colorized in watercolor or pastel tones.

Sideshow Theatre will present Antigonick at Victory Gardens' Richard Christiansen Theater, 2433 N. Lincoln Ave., through April 5. Performances are Thursday-Saturday at 7:30pm and Sunday at 3pm. Tickets for $20-30 can be bought online or by calling 773-871-3000.

Reposted with permission of Nancy S. Bishop and Gapers Block.