Brecht's Round Heads and Pointed Heads 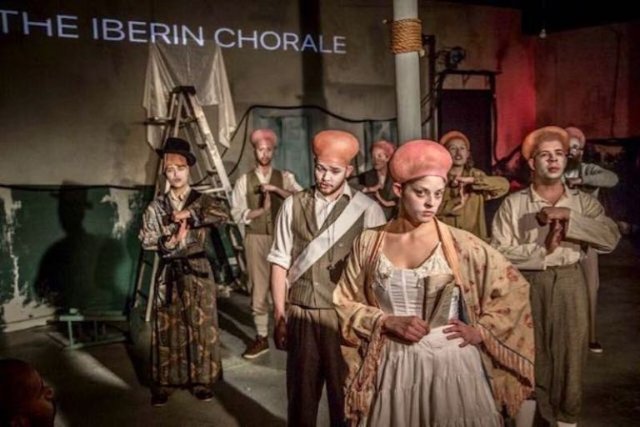 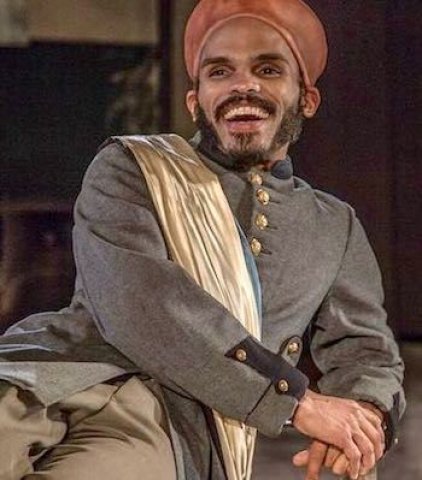 Round Heads and Pointed Heads is a cavalcade of political events and characters, woven loosely (very loosely) into a Brechtian story of politics and money.

Red Tape Theatre’s new production of Bertolt Brecht’s play is subtitled Money Calls to Money. Director Max Truax choreographs the large cast through battles, trials and songs to tell a classic Brecht story of capitalism vs. human rights. It’s set in the land of Yahoo, where the Viceroy (Peter Laughlin) rules over the Round Heads and the Pointed Heads, known as the Zaks and the Ziks. The Zaks or Round Heads are the ruling class, with money and power, while the Ziks are the farmers, workers and immigrants, who support the faction known as the Sickle.

Is Bertolt Brecht the playwright for the Trump era? We will argue that he should be so designated.

The Viceroy frets that he’s not able to manage the country’s economy well. With the encouragement of Messina, the privy councilor (Casey Chapman), he decides to delegate his powers to Iberin (Felix Mayes), a man who can “cow the peasants” and is “a selfless soul—or known at least as such.” Messina says Iberin has a theory for how to handle the economic problem. He’ll pit the Zaks against the interloper Ziks …. so instead of “a class war cleaving rich from poor, there’s war between the Zaks and Ziks.” So the powerful Zaks (wearing silly round rubber headpieces) rule the city of Luma and keep down the rural Ziks (wearing equally silly pointed rubber headpieces).

Round Heads is more a pageant than a play; there are few plot intricacies and little character development. There are plot points involving a farmer (Caleb Roitz) who thinks his taxes and rent are too high; he demands a horse to help him plow his fields. His daughter Nanna (Maryam Abdi) goes to work in Madame Cornamontis’ coffee house and then Madame C (Ann Sonneville) sells the Zakkish girl to a Zik. There’s a trial of a Pointed Head landowner (Ben Chang) in which the judge (Nora King) holds court at the top of a tall ladder, wearing a massive curly white wig. A sharp and articulate attorney (Ambrose Cappuccio) defends his client. A nunnery is involved too.

In Brechtian style, scene changes, locations and news announcements are projected on the wall. You may have trouble keeping track of the plot but never fear. The cast has lots of fun and you will too.

The titles of the original songs composed by music director Nicholas Tonozzi are also projected. I have to admit that my favorite song is not by Tonozzi. Late in act one, Madame Cornamantis performs a lusty, dramatic version of Leonard Cohen’s “Everybody Knows.” The lyrics are perfectly suited to the plot and I think the late singer-songwriter would have been pleased. Oh, and they’re also ideal for 2018.

Red Tape gives its audience a special welcome. Just before the play opens, the audience enters the theater as a group, to be greeted with applause and cheers from the whole cast, assembled in costume on stage. Act two begins with a kazoo parade.

Director Truax is masterful in keeping track of the madness. Mayes stands out in style and voice as Iberin, as does Chapman as the privy councilor and Cappuccio as the attorney (wearing a fedora over his round rubber headpiece). Sonneville and King are also strong performers.

Nicholas Schwartz’s set design makes good use of the warehouse-like space in Red Tape’s storefront, The Ready (shared with Theatre Y). Furniture is mostly stools and the aforementioned stepladder plus a red rocking horse. Lighting by Taylor Ovca is also utilitarian. At one point, two performers sit on the floor and point spotlights at actors. Credit goes to Rachel Sypniewski for costumes, mostly in a beige color palette, with a few splashes of orange/red.

Bertolt Brecht is best known for plays such as Mother Courage and Her Children, The Caucasian Chalk Circle and Threepenny Opera. But Brecht is having a moment in Chicago theater. Recent productions of his plays have included The Last Days of the Commune at Prop Thtr and Fear and Misery in the Third Reich by Haven Theatre. Two recent strong productions of his work were The Life of Galileo at Remy Bumppo and The Resistible Rise of Arturo Ui at Trap Door. Brecht is always political, usually outrageous, and pulls no punches in brawling with the right wing. Perhaps we should designate Brecht the playwright for the Trump era.

And in case you were wondering why Brecht named his country Yahoo, he borrowed it from Jonathan Swift’s Gulliver’s Travels.

Round Heads and Pointed Heads continues at Red Tape Theatre, 4546 N. Western, through April 21. The performance runs 2 hours, 15 minutes plus an intermission. Red Tape is part of the free-theater movement; you can reserve free tickets here for performances Friday-Monday.