The Wolves by Sarah DeLappe 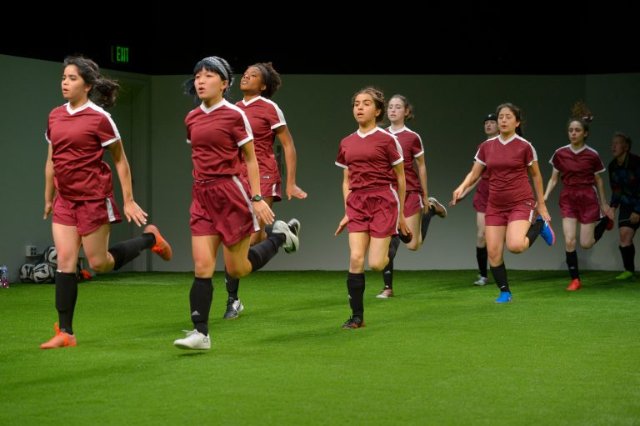 The joys and angst and relationships of teenage girls are not uncommon themes in entertainment. In recent years, those elements of life have been expanded to the context of girls as members of teams, perhaps most famously in the cheerleading based Bring It On and its sequels. Notably, that work was developed for the screen and targeted the adolescent girl market.

In The Wolves, Sarah DeLappe has written a play about a group of high school girls on a soccer league team that can satisfy theater goers of many ilks. It triggers waves of laughter and perhaps some amazement and embarrassment to those who haven’t peeked behind the curtains of young girls’ social behavior. The taunts and bawdiness and discussion of very personal subjects probably isn’t much different than the interaction of boys of the same age.

It is probably fair to say that the explosive growth in girls athletics, especially team sports has enhanced some dimensions of female development. Training promotes physical fitness, playing enhances physical coordination and skills, skull sessions expose girls to strategic and tactical thinking, and teamwork on the field and interaction throughout the processes add to socialization. Not to mention that participation is resumé building for college acceptance and scholarships. So the domain that the playwright examines is ripe with importance and these avenues are explored.

In a conceit reminiscent of the song “Jailhouse Rock” with the lyrics “Number 47 says to number 3, you’re the cutest jailbird I ever did see,” the program identifies the players by jersey number. The device actually aids comprehension as an ensemble of nine girls in soccer garb is thrown at the audience all at once. Also, impersonal numbering of units is suggestive of a system of parts that operates as an entity.

The players come from differing backgrounds, perhaps compounded by their going to several different schools. A few archetypes dot the landscape. The keeper (goalie) is the one that suffers anxiety and vomits before each game. She is also an academic star and a loner that sports a peroxided buzz cut, while the other girls have the long hair, feminine look. The striker is the fast girl with the foulest of mouths. There are the leaders, the well-informed, the serious, the playful, and the ditsy. And the ones looking for their Brandi Chastain moment.  Then there’s the immigrant that one of the other girls always identifies as Mexican, even though she’s Armenian. Her family just holidays in Mexico a lot.

The Wolves has very little plot in the sense of one incident building on another to create a cohesive narrative. What it does have is a rich depiction of girls being girls with all of their supportiveness, cattiness, humor, and more. A panoply of incidents marks the highs and lows that any group of that size would face, including some profound events that provide the emotive impact of the play.

The stage is covered in astroturf, giving a realistic feel to the soccer environment. Two processes are omnipresent. Most of the time, the girls are stretching or exercising or conducting cooperative ball drills. And virtually all of the time they are gabbing, often speaking over one another, sometimes displaying ignorance and other times insight. Tampons and the Khmer Rouge are discussed side by side. And sometimes topics are raised that are found to be verboten because of the offense they create, though it is usually innocent ignorance that produces the hurt. What is revealed along the way are the challenges, aspirations, successes and disappointments of girls on the cusp of womanhood as individuals and as part of a coordinated unit.

The cadre of actresses distinguish themselves. Given that they have to overcome the leveling effect of wearing identical uniforms (with the exception of the keeper and the soccer mom), they imbue their roles with distinct personalities.  While each does well, two of the bigger roles that are particularly well handled are Emma Roos as the demonstrative striker #7, and Neiri Rojo as the conflicted new arrival #46.

The Wolves lacks the emotional power of a well developed climactic drama. What it does offer is a unique manner of presenting its subject matter. The revelations about this well-defined social group keep the attention and make for an interesting experience.

As a sidebar, it’s worth noting that Marin Theatre Company cleverly and generously has employed a full understudy cast, and that cast will perform as a group on closing night.  All of the understudies are students at Marin County high schools, and this represents a wonderful opportunity to appear on professional stage.  I had the good fortune to sit in the audience next to two of the girls, understudies for #8 and #14.  It was delightful to see their reactions to watching the full play with their professional counterparts.  Talking with them afterward, they shared how inspired and appreciative they were to be able to learn so much from this fruitful arrangement.  Cheers to MTC.

The Wolves, written by Sarah DeLappe and directed by Morgan Green is produced by Marin Theatre Company and plays at its stage at 399 Miller Ave., Mill Valley, CA, through April 8, 2018.