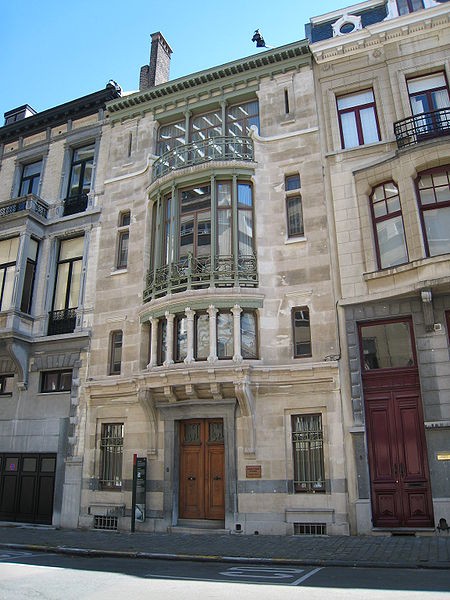 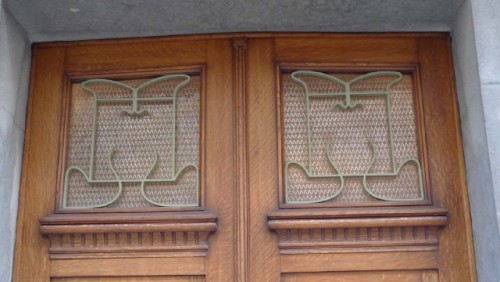 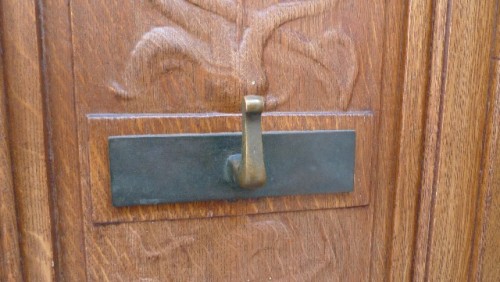 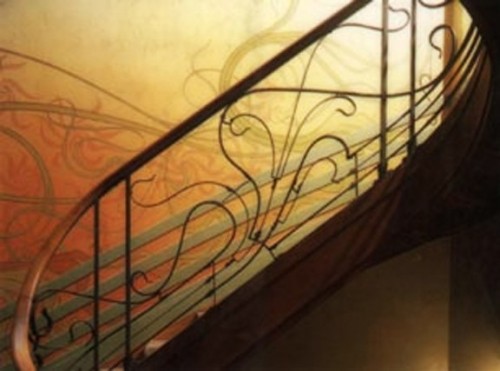 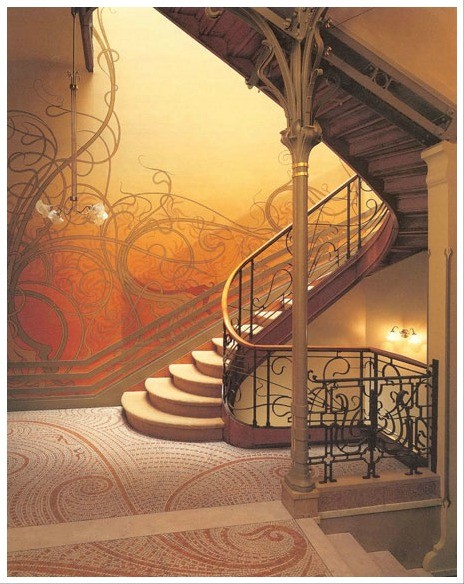 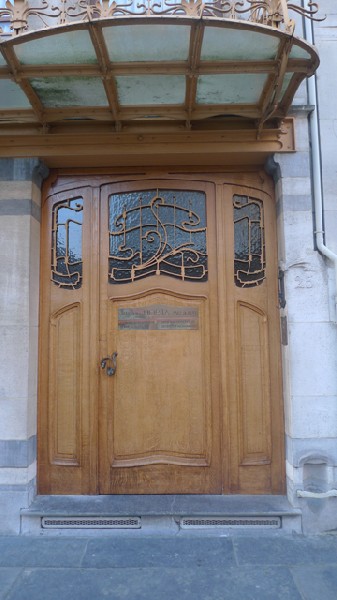 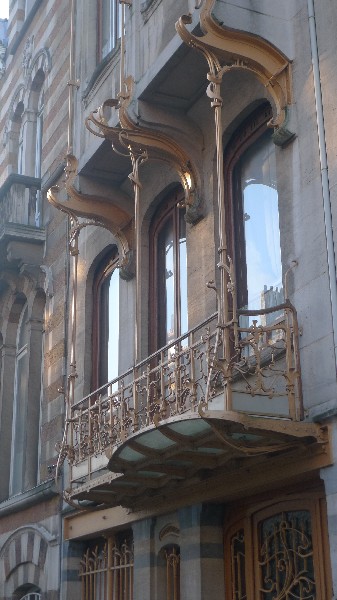 Balcony at the Horta Museum by Victor Horta 1897 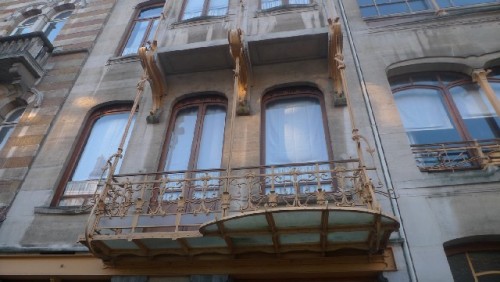 View from underneath of balcony at Horta Museum, 1897 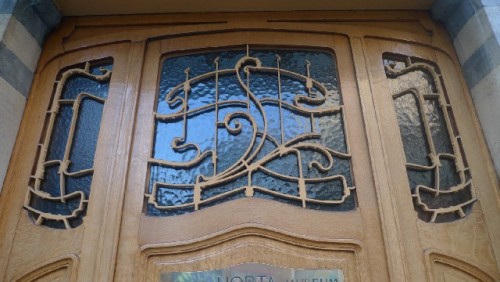 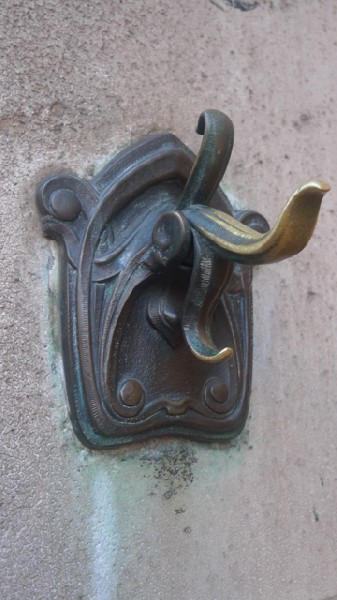 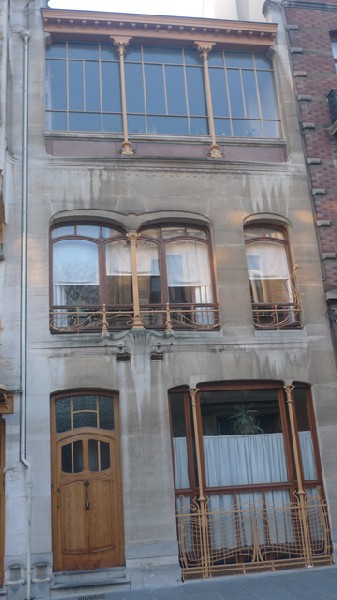 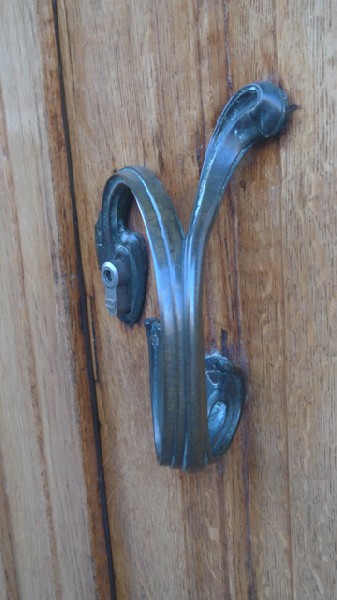 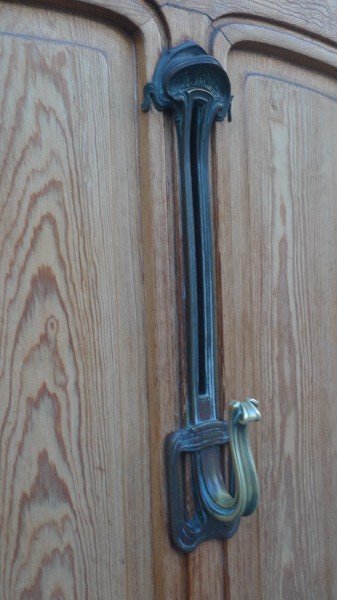 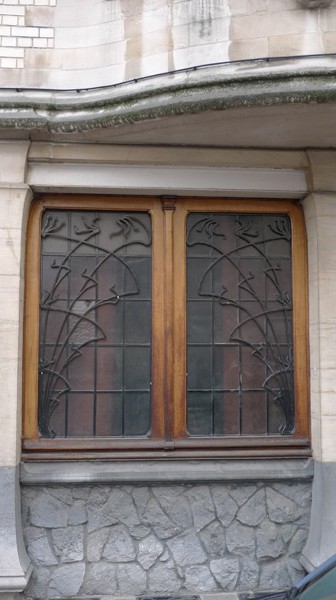 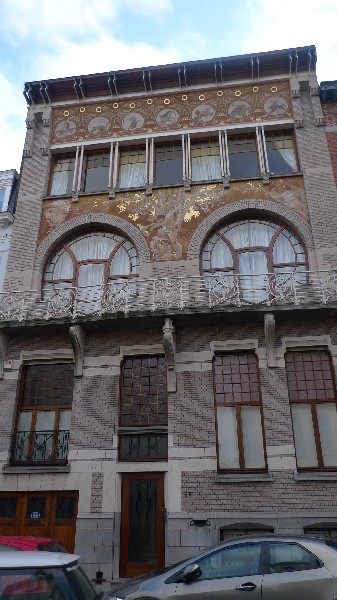 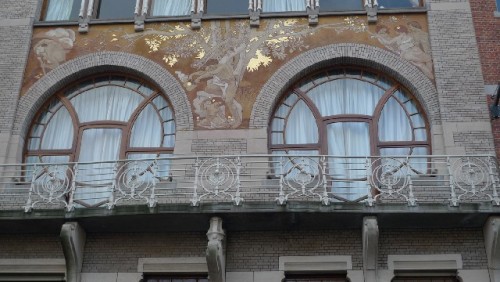 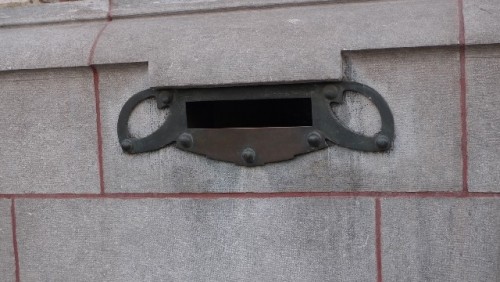 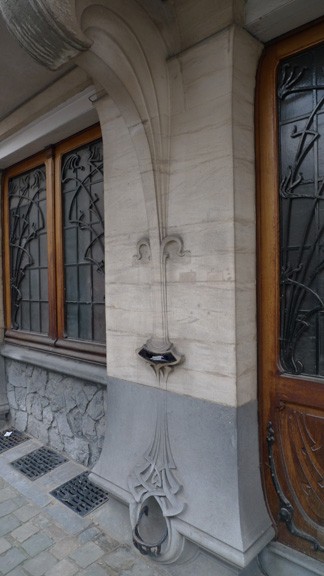 Art Nouveau is often flowery, organic, and asymmetrical with it’s flowing forms corresponding visually to musical movement. With its roots firmly in the second half of the 19th Century, in all of its various forms and translations, Art Nouveau became the doorway to our modern age.

Primarily dating from the 1890’s until the outbreak of World War I (1914), Art Nouveau was the refinement of an aesthetic reaction to the excesses of the industrial revolution’s mirror twin progeny of technological triumphs and deplorable social conditions.

Perhaps the most iconic example of Art Nouveau design can be seen in Paris. Here, Hector Guimard created the fluid, curvilinear lines of  the now familiar subway entrances to Le Metro. However, the three best cities to see Art Nouveau design and architecture are Glasgow, Scotland, Barcelona, Spain and Brussels, Belgium. Each of these cities had a leader of this creatively diverse design movement.

In Glasgow, the work of Charles Rennie MacKintosh is uniquely elegant and beautiful; in Barcelona, Antonio Gaudi's work is at once fantastic and spiritually dense; and in Brussels, the work of Victor Horta epitomizes the total integration of a design theme into a sinuous structure and all of its details. Not surprisingly,Horta greatly influenced Hector Guimard's work who adopted many of Horta’s design ideals in pioneering the Art Nouveau style in Paris

Art Nouveau was not one movement but a number of visually related thematic directions that were created in different countries at different rates in a variety of ways roughly over a 20 year period.Bridging the Belle Epoch and the Edwardian periods, Art Nouveau had many names as well as many looks. Art Nouveau drew on cultural and aesthetic sources throughout Europe and the rest of the world.

In France and Belgium, it was named after a furniture house of the same name; in England, it was called "the decorative style;" the German name for it was Jugendstil (youth style) after the magazine "Die Jugend;" the Stile Liberty was the Italian name based upon the London store Liberty of London; in Austria, it was called Sezessionstil related to a new and more geometric painting and design; and in Spain, it was referred to as Modernista.

There were great Art Nouveau designers and craftsman from Belgium. Preeminent among these was the architect and interior designer Victor Horta, a true Belgium master. His style inspired and influenced the aesthetic ideals of the avant-garde group of artists and architects in Belgium and throughout Europe. After studying drawing, textiles and architecture at the Fine Arts Academy in Gent, Horta established his own architectural practice in Brussels.

Known for his "whiplash" design style, the organic forms and shapes of Belgium Art Nouveau as established by Victor Horta generated creatively revolutionary thinking and marked the beginning of modern architecture and design.

Plant-like forms and sensuous double curves, that would later be known as "the Belgian line" were adapted to fit every detail of his buildings. All elements including painted glass, furniture, doors, wrought-iron, metalwork, door handles and even the house bell all contained the linear quality of his designs.

Set in the Brussels neighborhood of St. Gilles, Horta built in 1893 Hotel Tassel or Tassel House. It was a townhouse built for the Belgian scientist and professor Emile Tassel in 1893-1894. The St. Gilles Neighborhood is a distinctive outdoor museum of Art Nouveau structures and details.

Because of its highly innovative plan and its ground breaking use of materials and decoration, it is generally considered as the first true Art Nouveau building. It was put on the UNESCO World Heritage List in 2000 . This residential commission established Horta's reputation as an innovator with great attention to detail.

Tassel's House demonstrates many of the variety of elements that went into making Art Nouveau. These design elements involve an alternate perspective on historical styles, an arts and crafts sensibility, and the modern materials of iron and glass.

Though Horta did not see this building as a total break with the past, the stone exterior includes consoles, moldings, and columns of classical architecture, he did develop new ways of building. Instead of stone, the columns are iron. Also, Horta created the building's facade as smooth and fluid, unlike the articulated planes of classical buildings.

In the interior, there is the delicacy and curving "femininity" of a rococo drawing room. But the detailing was alloyed by modernity in the choice of materials and their interpretation as plant forms. The iron columns sprout slender iron strips to support the floor above. Material are not disguised but clearly visible, each decorative in their own right. Material use by Horta emphasizes rather than conceal the Tassel structure.

Horta's organization of interior space was quite innovative. Two light wells filled the rooms with natural light, and the floor plan had a fluid and asymmetrical flow. To achieve an integrated design whole, Horta insisted on designing all interior decor elements. The stair rail and painted wall decoration, the mosaic flooring, light fixtures, hardware and door handles are elements of his total design.

Such a complete visual environment was a thoroughly modern design statement, one that placed contemporary man in a fully contemporary setting. The building is still in use as a headquarters for a firm at 6 rue Paul-Emile Janson, Brussels. Sadly, the current tenant, a private company, has decided to place commercial stickers in some of the Tassel House windows, thus destroying the elegance of the total facade.

In the late 1890s, Victor Horta was commissioned by the Belgian Socialist movement to build the Maison du Peuple, which was unfortunately demolished in 1965. In 1898, he built his own house and workshop, now the Horta Museum. Unfortunately, the museum is only opened a few hours in the afternoon a few days a week.

This building illustrates one of the great innovations of Horta--the rooms are built around a central hall. From the glass ceiling, light enlivens the house. This innovation created a much more natural illumination of the building than was the case in the traditional late 19th century houses.

At the turn of the century, Horta had become widely known and designed various houses and buildings in Brussels as well as department stores and the Central Railway Station. Along with fellow architects Henri van de Velde and Paul Hankar and jeweler Philippe Wolfers, Victor Horta had a major influence upon Belgian, French and European design.

Inspired by nature, Horta's style was swirling and linear, like the stems of plants. Tending towards unity, every material, surface, or ornament was harmoniously assembled with great elegant fluidity and punctuated in detail by innovative shapes and lines.

The buildings Horta created are especially significant for their interior architecture. The irregularly shaped rooms opened freely onto one another at different levels. Details counted. From the large to the small, Horta's design was total. The nature-influenced design of an iron balustrade was echoed in curving decorative motifs of the mosaic floors and plaster walls.

Although many of Horta's buildings have been needlessly destroyed, his former assistant Jean Delhaye worked to preserve what remained of his work. Delhaye also secured the Horta residence as a permanent museum.

Horta died in Brussels in 1947. Through the ebb and flow of decades of stylistic trends and fads, Victor Horta's work still resonates as elegant visual and functional statements.