American Masterpieces Intersect on the Prairie 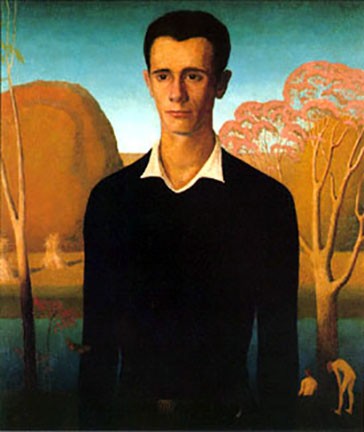 Regionalist Master Grant Wood (1891-1942) painted "Arnold Comes of Age (Portrait of Arnold Pyle)" in 1930, the same year as his iconic American Gothic. Pyle (1908-1973), who was Wood’s studio assistant, later became a recognized painter and teacher. The oil on pressed board portrait is in the collection of the Sheldon Museum of Art on the campus of the University of Nebraska-Lincoln. Image courtesy of the museum.

On the city campus of the University of
Nebraska-Lincoln is the Sheldon Museum of Art, a memorial to Mary
Frances Sheldon (1892-1950), who bequeathed her estate to the
University for the construction of an art museum. Mary Sheldon's
bequest stipulated that an architect of international repute should
design the building and her vision set in motion the creation of what
has become a major collection of American art within a significant
work of architecture.

THE BUILDING. To plan the museum, a committee from the University of
Nebraska chose the renowned American architect Philip Johnson, who had
just completed two dramatically different but equally striking museums
-the Munson-Williams-Proctor Arts Institute in Utica, New York (1960)
and the Amon Carter Museum in Fort Worth, Texas (1961). For the
Lincoln site, Johnson created an elegant and graceful two-story
temple-like design with compact second floor galleries set on either
side of a soaring light-filled atrium. The arched façade of the
concrete building is covered in Italian travertine marble. The Sheldon
Museum was dedicated on May 16, 1963 and was accepted into the
National Register of Historic Places on Sept. 2, 2013, in the first
year in which it was eligible.

A BREADTH OF HUMAN EXPERIENCE. Jonathan Frederick Walz, Curator of
American Art at the Sheldon Museum of Art, said, "As a curator, I
particularly enjoy my role in facilitating relationships: between
different artworks; between people and ideas; between the museum and
its surrounding communities. Like artists, curators make creative
decisions that articulate vision and help museumgoers see the world in
a new way. We're proud of our collection and love to share it with
guests. A visit to experience the Sheldon collection begins with the
museum building, a tour-de-force of mid-century design by renowned
architect Philip Johnson, which provides a beautiful forum where all
kinds of objects, ideas, and people intersect daily. With a collection
of more than 12,000 objects--including works by Constantin Brancusi,
Aaron Douglas, Edward Hopper, Lee Krasner, Yinka Shonibare, Jaune
Quick-to-See Smith, and Grant Wood--Sheldon is well positioned to
relate a breadth of human experience to the contemporary lives of
students and visitors from around the world."

WILLA CATHER AT THE SHELDON MUSEUM OF ART. American author Willa
Cather (1873 - 1947) is known for her novels of frontier life, chief
among them her Prairie Trilogy - O Pioneers! (1913), The Song of the
Lark (1915), and My Ántonia (1918). Cather graduated from the
University of Nebraska, which maintains the Willa Cather Archive, a
site for the study of her life and writings.  From May 19 through
August 30, 2015, in commemoration of the centenary year of The Song of
the Lark, the Sheldon Museum of Art presents Visual Cather: The
Writer's Pictorial Imagination, examining Cather's interest in a range
of cultural production, not only literature. This exhibition focuses
on Cather's personal and professional interest in art--from being
influenced by late nineteenth-century French painting to diligently
editorializing the illustrations for her novels and artfully crafting
her own image as a literary icon. Jules Breton's painting The Song of
the Lark (1884, Art Institute of Chicago), an inspiration for her
novel, will be on display. Visual Cather coincides with the 15th
International Willa Cather Seminar, which takes place in June in
Lincoln and Red Cloud, Nebraska.

MUSEUM PARTICULARS. The Sheldon Museum of Art is located at 12 and R
Streets in Lincoln, Nebraska. Admission is free. For more information
or to arrange a tour, call 402-472-2461, visit www.sheldonmuseum.org
or email sheldon@unl.edu.

Susan Cohn is a member of Bay Area Travel Writers; the North American
Travel Journalists Association; and the International Food, Wine &
Travel Writers Association. She may be reached at
susan@smdailyjournal.com.

This story first appeared in the San MateoDaily Journal.