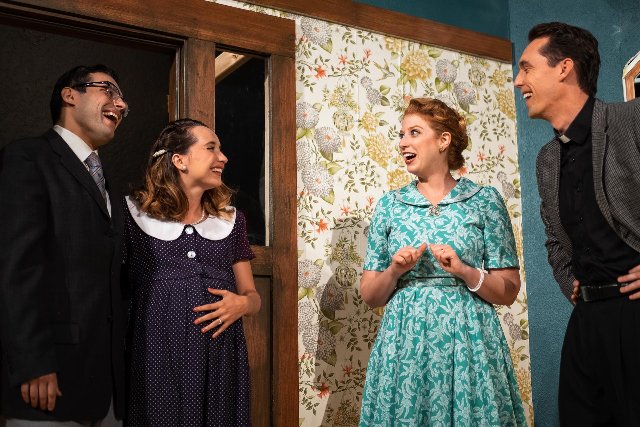 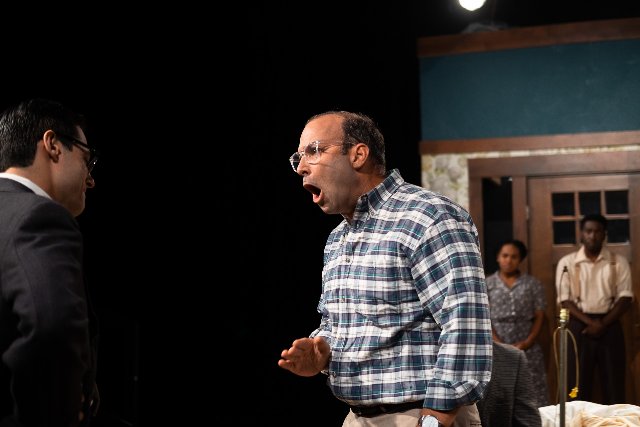 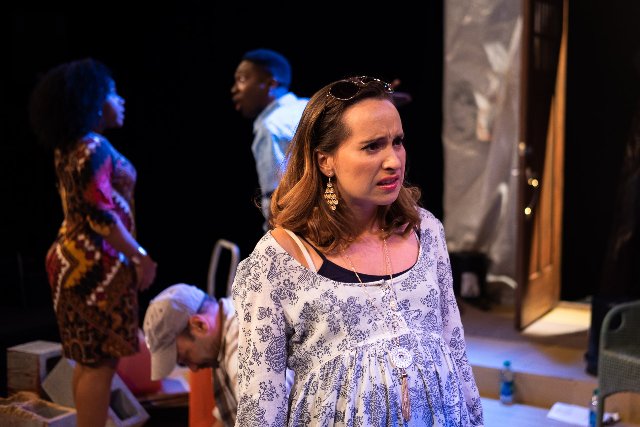 Maybe developing two left feet would be a good idea before discussing race.

Because if Bruce Norris’ comedy Clybourne Park is indicative of today’s society, we’ve all got moves that would impress the likes of Ginger Rogers and Fred Astaire.

“Jesus, maybe we oughta save ourselves some time and…just say what it is we’re really saying instead of doing this elaborate dance around (the topic of race),” a character opines in the second act.

“It is a euphemistic tap dance,” another character suggests in the fist act of Norris’ Pulitzer-Prize and Tony-Award-winning play.

But this corrosively funny, squirm-inducing, complex, yet compact and explosive piece is no dainty tap dance.

One might better liken its force to two hulking football players butting helmets after running at full speed from opposite end zones, colliding midfield.

One can keenly feel the collision of this incendiary play’s all-too-timely and combustible issues in New City Players’ sparkplug of an often-strong, if not always top-notch production. It’s running through April 22 at The Vanguard Sanctuary for the Arts theater in Ft. Lauderdale.

Under Timothy Mark Davis’ measured direction and sensitive staging, the action slowly builds in intensity until South Florida summer-like heat radiates from the stage. Of course, there will always be shouting in any production of Clybourne Park, but there also needs to be nuance.

Davis has helped the cast find that nuance during parts of the production. However, sometimes emotions are too over-the-top, resulting in overacting. At least one performance crosses over into caricature. The screaming, at times, is so loud, words are ironically hard to understand.

The action begins slowly, even casually and with a charm, suggesting we’re in for a lightweight, fluffy piece. But the relatively new, nonprofit New City Players, with a motto of “Staging Transformative Theatre,” proves otherwise.

With its bold production choice to open its 2018 season, Davis and Co. clearly are not merely content to offer us an escape from life’s problems. Rather, they’re forcing us to feel uncomfortable. Clybourne Park makes us look within ourselves, perhaps rethink our beliefs and values and possibly even take action to help change what ails our world. Great theater can force us to take these steps – and Clybourne Park is great theater. The beginning of the second act is a bit dry, but you'd be wise not to nod off. Talk about easements and other technical terms soon ends and sparks soon fly.

In this deftly-structured piece that holds nothing back, doesn’t preach or waste a word, makes audiences laugh and cringe (often at the same time), Norris’ message is clear: We need to stop sugarcoating and “dancing.” People must directly confront racism by speaking candidly at the outset of a discussion.

Part of the play’s biting humor stems from the characters’ skirting around the issue before everyone realizes what the discussion’s really about. Then, the situation disintegrates into a mud-slinging, unruly elementary school classroom.

Norris’ structure neatly demonstrates that when it comes to race and other matters, not much has changed from 1959, the first act’s setting, to the second act’s 2009.

The play picks up where Lorraine Hansberry’s seminal 1959 drama A Raisin in the Sun left off.

A deceptively charming Karl Linder, the only white character in Raisin, has just left the African American Younger household.

This family has proudly refused his monetary offer not to move into the upscale, white Chicago neighborhood Clybourne Park. In Norris’ play, Linder arrives at the Clybourne Park home the Youngers have bought. His new aim: Convince the current residents to reconsider selling their home to the Youngers.

What begins as a laid-back, charming evening for homeowners Bev and Russ ends in a tantrum-filled, expletive-slinging night. It’s one in which not even a minister (a convivial and supportive Johnny Contini) is spared the threat of physical violence and “locker room” language. The vulgarities and innuendos throughout the play are truly gasp-inducing – and hilarious.

In the second act, we’re in the same house that Bev and Russ sold to the Youngers in 1959. But now, Clybourne Park has been an historic black neighborhood for a long time. A white family plans to purchase and enlarge the home. A petition is circulating to preserve the neighborhood. Again, what begins as a civil discussion ends in an evening of discord, disorder and eventually chaos. Once more, the adults seem more like children than grown people.

Fifty years have passed, yet the topic of race hasn’t lost an ounce of potential to turn into a powder keg.

Norris explores a variety of issues, ideas and questions to ponder. His play considers topics such as gentrification, the concept and definition of community, the affects of political correctness and language in general, class and, of course, race and its intersection with real estate. This is not an all-inclusive list.

Part of what’s remarkable about this play is that all the ideas and issues tie into race. Furthermore, the play never feels overstuffed. While it can jolt you into realizing we all might harbor some racism, the piece’s abundant humor tempers that discomfiting feeling.

In addition, Norris doesn’t lump the characters into clear “good guys” or “bad guys.” Once you think you’ve found your indisputable “hero” or “villain,” he/she says something which might encourage you to rethink the person.

We can sympathize with Linder, albeit too briefly as portrayed by Daniel Gill. He’s part of a cast whose work is mostly strong, but there are weaknesses.

Gil invests Linder with some disarming charm when he first enters. However, he mostly comes across as too cartoonish. Furthermore, there’s little subtlety in his clearly sarcastic, aggressive and mean Linder. He speaks in an oddly sing-songy, high-pitched voice while leaning forward. The production could be funnier in a biting way if the actor playing Linder speaks some of his lines with an innocent, pleasant tone.

Gil fares better in the second act as Steve, the husband of the white couple looking to buy the home. This character talks before he thinks and Gill’s impulsive demeanor serves him well.

Krystal Millie Valdes as Steve’s wife, Lindsey, se-saws from a convincingly annoyed, admonishing and disbelieving spouse to a freaked out, panicky woman. Valdes overdoes it somewhat when Lindsey panics, sounding too petulant. However, the performer delivers an overall solid performance.

The difference in set design (by Ryan Maloney) is marked. The upscale, period set of the 50s contrasts vividly with 2009. The latter setting comes complete with graffiti-lined tarps and a junkyard-like appearance.

Clybourne Park is a play that will only grow in relevance and power if racial strife continues plaguing this country. One question we might ponder: Will folks still “dance” around the issue of race 50 years from 2009, in 2059?

Or will “two left feet” prevent the “maneuvering.”