Production in Miami Through Sunday 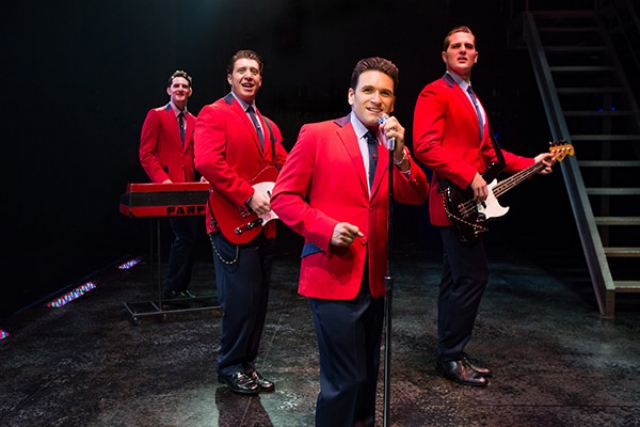 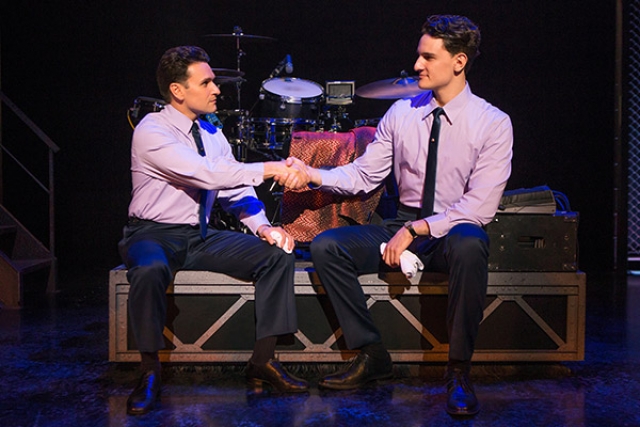 Their music has become so well-known and popular that a song barely begins before thunderous clapping fills the auditorium.

During a recent performance, the audience' clapping was so loud and sustained at various points that hands, no doubt, turned as red as roses offered with love on Valentine’s Day.

Roughly 13 years after “Jersey Boys” premiered at the La Jolla Playhouse in California, fans still love those less-than exemplary boys from the mean streets of New Jersey. They rose to music Hall-of-Fame status with irresistible rock and pop songs. People still adore this foursome from the '60s, judging from a recent performance of the musical, which is in the midst of yet another national equity tour (international, technically, because Canada is included).

The tour, featuring an electric cast and fine work from the technical crew, is decked out at Miami’s Adrienne Arsht Center for the Performing Arts of Miami-Dade County through Sunday. Then it invades Portland, Ore., different cities in California, Kansas City, Mo. and Charlotte, N.C. before heading north of the border.

During the performance reviewed at the Arsht in downtown Miami, Frankie Valli (a vivacious Aaron De Jesus, who alternates with Miguel Jarquin-Moreland in the role), had just started singing “Can’t Take My Eyes Off You” when the audience burst into applause.

It’s no secret that fans flock in droves to “Jersey Boys” due to the jukebox musical’s vibrant, catchy songs that have become as familiar to many of us as the sight of our face in the mirror.

“The Boys,” at least as portrayed in “Jersey Boys,” may not exude choirboy purity, but perhaps we love them because we see parts of ourselves in Tommy DeVito (lead guitar and baritone), Nick Massi (bass guitar and vocals), Frankie Valli (lead vocalist) and Bob Gaudio (keyboards and tenor vocals).

They’re not perfect (“None of us were saints,” as one of the foursome reminds us), but they’re gritty, determined, mentally tough and, in the musical, are searching for what our immigrant grandparents sought so fervently – success and happiness that comes with the American Dream.

The sun isn’t always shining on folks during their quest for that elusive happiness and prosperity. Dark moments accompany the bright and cheery ones. Some moments are so bleak that recovery seems impossible. There’s bleakness in scenic designer Klara Zieglerova’s two-story grey set, complete with stairs and fences through which you can barely peak out. The set and backdrops nicely reinforce the tough streets of New Jersey and the stairs can symbolize the group’s rise and fall. The set also features some authentic-looking visual surprises.

The lighting neatly corresponds to various moods, but many of the projections seem unnecessary. For example, during a courtroom scene, what good does it do to have a cartoonish judge projected onto a screen, when the real judge appears as a character? Projections are meant to enhance a scene, like when a famous “Jersey Handshake” is executed to seal a deal between two group members. The projection illustrates just how tight the grip is.

“Jersey Boys” has the air of a concert with adoring fans singing along, swaying, clapping and perhaps toe-tapping. It’s not a concert; it’s a smartly-structured musical that tells the story of Frankie Valli and the Four Seasons’ rise to fame, eventual decline, a major triumph and hope of future success.

The show’s full title is “Jersey Boys: The Story of Frankie Valli and the Four Seasons.”

The musical group came up with “Four Seasons” after the name of a bowling alley. But in the musical, “Four Seasons” symbolically represents the high and low points of the group’s career.

The show is structured so that different sections correspond to seasons of the year. During the beginning of the musical, “Spring” stands for the group’s beginning, just as that season symbolizes new beginnings. The second part, “Summer,” symbolically suggests brightness and success these “Jersey Boys” are enjoying. It’s fitting that just after the “Summer” sequence begins, the song “(Who Wears) Short Shorts” is sung. Then things turn bleak, just as the days in New Jersey and other parts of the north are shorter, darker and drearier than the warmer months.

Each “season” or section of the show is narrated by a different group member, telling the foursome’s story from his perspective. Everybody, pardon the cliché, sees the same thing differently. Besides, as we all know so well by now, is there such a thing as objective, indisputable facts or truths?

Just as each of their instruments makes a different sound, the four actors playing the “Boys” have given their characters distinct personalities, under Des McAnuff’s astute direction.

De Jesus nails the falsetto, that seemingly impossibly high voice for a male singer to execute, let alone with clarity. De Jesus’ mastery of the falsetto becomes clear, particularly in the hit song “Sherry.” De Jesus, as Valli, contrasts sweetness with grit. During the saddest moment in the show, however, it a shocker that De Jesus doesn’t give even a hint of crying. His expression is way too mild, given what’s just happened to Valli.

In contrast to De Jesus’ sometimes mild, sometimes scrappy Valli is Matthew Dailey’s in-your-face, intimidating, confident DeVito, a hustler and gambler complete with a Jersey accent and a cocky, tough demeanor. Dailey, a big man, owns the stage without overshadowing his castmates. He makes DeVito charismatic, but not someone you want pitted against you.

Keith Hines endows Massi with an understated, wry demeanor, but convincingly conveys vicious moments of rage when describing his rough time sharing a room with DeVito on the road. Massi’s an alcoholic, and Hines’ mostly quiet voice, tinged with dry humor suggests a character just a bit hungover from a night at the bar.

Cory Jeacoma imbues Bob Gaudio with pride and confidence, qualities understandable in a man who writes most of the group’s music.

The audience at the reviewed production was obviously most interested in hearing those memorable songs with creative, upbeat lyrics and this touring cast mostly delivers.