Howard Sherman on an American Icon 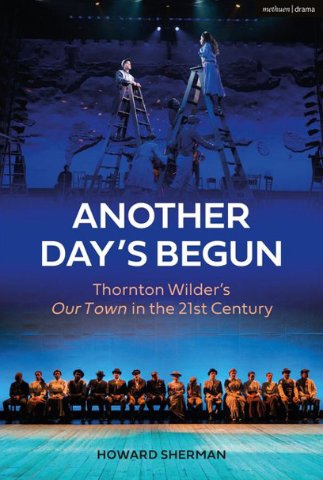 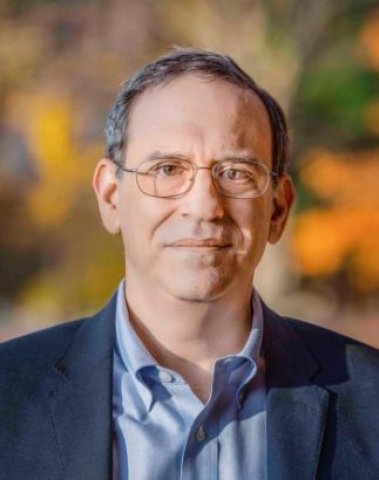 Howard Sherman courtesy of the author.

Like most theater critics and theater lovers, I’ve seen Thornton Wilder’s Our Town more times than I can count. I’ve seen high school, college, and community theater versions. I’ve seen film, TV, and parody versions. But the one that I remember most vividly was The Hypocrites’ production in the basement of Chopin Theatre in May 2008. I walked in with my grandson, who was then 10 and a seasoned playgoer. (I started taking him to toddler theater as soon as his parents would let me.)

It was a minimalist production, as Wilder advises in his script, but the actors wore today’s street clothes, instead of period costumes. These artistic choices by director David Cromer made the act 3 reveal of a fully equipped early 20th century kitchen, bacon frying on the stove, and actors in period costumes, even more astonishing. By the time the play ended with the beautiful scene at the cemetery on the hill, I was in puddles of tears. The kid, now a college graduate, remembers it as sad but with a sense of closure.

Howard Sherman describes many scenes like this in his new oral history, Another Day’s Begun: Thornton Wilder’s Our Town in the 21st Century. In describing productions both traditional and highly nontraditional, Sherman illustrates the play’s simple and lasting power. (The book’s title comes from the play’s opening monologue.)

Sherman interviewed 100 people who performed in, designed, or directed 16 productions of Our Town between 2002 and 2019. The book is an oral history of their experiences living in Grover’s Corners eight times a week. The productions selected (starting with the outstanding David Cromer productions) were chosen for their variety of approach, their geography and their impact on various communities, such as imprisoned and deaf individuals. Restricting his analyses to plays of this century enabled Sherman to speak first-hand with the artists, instead of relying on reports or past interviews.

Two chapters provide context for the oral history chapters. “Building Grover’s Corners” describes the play’s initial productions (it premiered on Broadway in 1938) and other stagings over the decades as well as the reception it received and the reputation it has amassed. “Expanding Grover’s Corner’s” describes adaptations, homages, parodies, and excerpts produced in other media, including film, TV, and radio.

It has become fashionable, Sherman begins, to criticize Our Town as ”sentimental, old-fashioned, golden-hued, sepia-toned, done-to-death nostalgia.” It has also become fashionable to improperly relegate Our Town to that category, as fodder for high-school theater and lit classes.

Our Town is not easy to synopsize. It doesn’t have much of a plot, although it has some memorable characters, starting with that iconic fedora-wearing, pipe-smoking Stage Manager, who introduces and narrates the action to us, the audience. The main characters are Emily Webb and George Gibbs, who we first meet as teenagers, plus their parents and neighbors. It’s a story of life and death in what was certainly an all-white, patriarchal, Protestant (except for those living in Polish Town), turn-of-the last-century community in New Hampshire—and the same town three years later and nine years after that. Despite the fact that we might cast it aside as all-white and provincial, Our Town has taken on “subversive power” over the decades, as Donald Margulies defined it in his introduction to a recent edition.

“It’s a shocking play. A deeply shocking play. The greatest American play perhaps. Because of what it takes on.” That’s how Gregory Mosher (former artistic director of the Goodman Theatre and director of a 1988 Lincoln Center Theater production) described it to Sherman recently. “If one of the questions of the play is not only that people die, but that civilizations die, 2020 seems like a very good time to be doing the play.”

Former New York Times theater critic Charles Isherwood wrote a classic summary of the play in a 2009 review: “Wilder sought to make sacraments of simple things. In Our Town he cautioned us to recognize that life is both precious and ordinary, and that these two fundamental truths are intimately connected.”

Sherman’s oral history begins with the Cromer productions 2008–2014. In early 2009, the production moved on to the Barrow Street Theatre in Greenwich Village where it played for a year a half and then moved to Santa Monica, Boston, Kansas City, and London. Cromer played the Stage Manager in many of those runs—as he did when the kid and I saw it in that basement theater. His Stage Manager is cool, matter of fact, without the folksy manner usually adopted by actors playing that character. Over the course of the New York run, the Stage Manager role was also played by Michael McKean, Michael Shannon, and Helen Hunt.

Cromer and nine others are interviewed in this chapter, which is made up of a series of paragraphs that create a narrative about the productions. Particularly interesting are Jennifer Grace’s comments when Cromer first asked her to play Emily; she thought she was too old, not enough something else. And later, she talks about how she felt in acts 1 and 2, which were meditations on being alive. And in act 3, where she dies. She says on first reading act 3, “it took my breath away because it spoke to something very lizard brain in me, very primal and urgent, which I suspect is a pretty universal feeling, which is that I do not want to die.” In the third act, she says, “I had ceased to be Emily and I was myself on stage.”

Cromer commented on how the cast in the first production was not very diverse and he thought that didn’t matter. The London cast, at the Almeida Theatre, was “aggressively diverse” and he felt “People like me have to evolve faster.”

Lookingglass Theatre’s 2009 production was co-directed by Anna Shapiro and Jessica Thebus, and featured Joey Slotnick as the Stage Manager, Laura Eason as Emily and David Schwimmer as George. It seems odd that Lookingglass, known for its highly physical, even acrobatic theater, chose to do such a simple play in 2009, especially so soon after Cromer’s minimalist production, which many critics considered revelatory in its simplicity and staging.

Westport County Playhouse, a former summer stock theater, staged Our Town in 2002–2003, in response to the September 11, 2001, attacks on the US. Actor Paul Newman played the Stage Manager, directed by Joanne Woodward, the new artistic director (and Newman’s wife). Woodward had restructured the theater’s program like a regional theater, with fewer productions and longer runs. Because of Newman’s presence, ticket demand was strong and the theater was able to self-produce Our Town for a limited run on Broadway in 2002.

Two Los Angeles theater companies—Pasadena Playhouse and Deaf West Theatre—co-produced Our Town in 2017 with three deaf actors playing the Stage Manager and alternating among other roles. Hearing actor Jane Kaczmarek was on stage voicing the role of the Stage Manager.

Pasadena Playhouse celebrated that production and Sherman’s book with “Another Day’s Begun: Exploring Our Town on Playhouse Live,” a live virtual conversation in early March. Producing artistic director Danny Feldman introduced the conversation and showed a clip from the 2017 production. Kaczmarek and Sherman discussed Sherman’s book and its various productions. Kaczmarek reflected on a woman playing the Stage Manager and talked about appreciating “the sacred ordinary” of Our Town.

Theatrical Outfit, a professional theater company in Atlanta, staged Our Town in 2019 in repertory with Moises Kaufman’s The Laramie Project about the murder of gay college student Matthew Shepard in a small town in Wyoming. The stage directions in Kaufman’s play deliberately mimicked those for Our Town.

In addition, Sherman features productions at Sing Sing Correctional Center in 2013; by Montgomery County Emergency Services in 2014; by Miami New Drama in 2017; at the Oregon Shakespeare Festival in 2008; and at Louisiana State University and Theatre Baton Rouge in 2019. There are also chapters on two productions in England—at the Royal Exchange Theatre in  Manchester in 2017 and the Open Air Theatre, Regent’s Park, London, in 2019.

Thornton Wilder’s three full-length plays show him to be a writer of diverse interests. My favorite has always been The Skin of Our Teeth about the modern, prehistoric family, the Antrobuses (who also represent the story of humanity, sort of like the Webb and Gibbs families in Our Town). He also wrote The Matchmaker (music added to turn it into Hello, Dolly!) plus many short plays, short stories and a novel. Our Town, The Skin of Our Teeth and the novel, The Bridge of San Luis Rey, all won Pulitzer Prizes.

Howard Sherman has written an engaging and deeply researched book for theater lovers and for anyone who has ever spent time with this Thornton Wilder masterpiece. The oral histories enliven the book with candid, often contrarian, views by the theatrical participants. The variety of stagings and performers in this century demonstrates Sherman’s premise that Our Town is not a play of nostalgia and sentimentality but rather one that reminds us to savor every glorious moment of our ordinary lives. That’s a tough but important message during this endless pandemic.