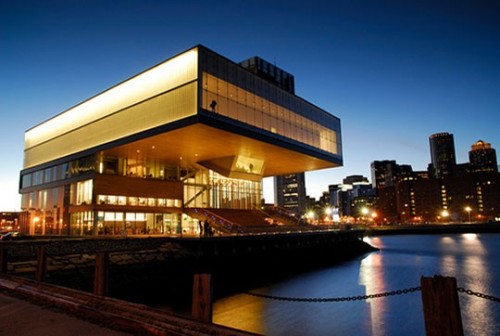 (BOSTON- April 10, 2012) The Institute of Contemporary Art/Boston (ICA) presents performing arts programming at its spectacular Boston Harbor location for Summer 2012. Programming includes perennial summer favorites Talking Taste, Harborwalk Sounds, and DJs on the Harbor, plus dance performances and the return of Experiment, bringing 50 writers, dancers, actors, and performers to the museum for an immersive theatrical experience. All events take place at the ICA, 100 Northern Avenue, Boston. Ticketed programs go on sale to Associate members and above on Friday, April 20, and to the general public on Tuesday, May 1. Tickets can be purchased at www.icaboston.org or by calling the ICA Box Office at 617-478-3103.

The presentation of red, black, GREEN: a blues (rbGb) was made possible by the MetLife Community Connections Fund of the New England Foundation for the Arts’ National Dance Project. Major support for NDP is also provided by the Doris Duke Charitable Foundation with additional support from the Andrew W. Mellon Foundation and the Boeing Company Charitable Trust.

Immersive theater artist Mikhael Tara Garver (Fornicated From the Beatles) collaborates with more than 50 writers, dancers, actors, and performers for Experiment, an evening filled to the brim with music, dancing, and hidden discoveries with unexpected encounters around every corner of the building. It’s a dance party, it’s a performance, it’s an experience: it’s Experiment.

Experiment is presented as part of the Emerging America Festival, in partnership with the American Repertory Theater and the Huntington Theatre Company. For more information about this and other programs in the festival, please visitwww.emergingamericafestival.org

A collaboration between choreographer/performer Jack Ferver and sculptor Marc Swanson, this meditative and visceral performance explores the shattering effects of abuse on queer youth. Ferver acts as the emotive flesh and voice inside Swanson’s eerie mirrored set/sculpture, delivering a performance that twists and turns between past and present with pastoral prose, frightening confessionals, and haunting choreography created through interviews, improvisation, and states of trance.

Co-presented by the Institute of Contemporary Art/Boston and Summer Stages Dance at Concord Academy.

HOW TO PASS, KICK, FALL AND RUN

The Merce Cunningham Trust was established by Cunningham to preserve, enhance, and maintain the integrity of his choreography and to make his work available to the public. The trust has recently launched the Cunningham Fellowship Program to support individuals in restaging Cunningham’s dances. Rashaun Mitchell — who staged this production—is one of a select few awarded this fellowship during the program’s pilot year. Mitchell was last seen at the ICA in the summer of 2010, performing with the poet Anne Carson as part of Co Lab: Process + Performance, a joint project between the ICA and Summer Stages Dance at Concord Academy featuring some of America’s best artists coming together in dynamic collaborations between the visual arts, music, poetry and dance.. Following an intensive workshop with Robert Swinston, Director of Choreography for the Trust, Mitchell will restage How to Pass, Kick, Fall and Run for special guest dancers during their three week residency at Summer Stages Dance at Concord Academy. Originally choreographed in 1965, How to Pass, Kick, Fall and Run is performed with stories from John Cage’s Indeterminancy.

The evening will conclude with a performance of Mitchell’s “Interface.”

Co-presented by the Institute of Contemporary Art/Boston and Summer Stages Dance at Concord Academy.

This popular waterfront dance party returns to the ICA! Stroll through our galleries, treat yourself to a delicious cocktail from the Water Café, then step onto the Putnam Investments Plaza for a night of dancing to music by some of the country’s best DJs. The roster of DJs for this event will be announced soon; check www.icaboston.org for details.

In the event of inclement weather, DJs on the Harbor will move indoors.

Berklee College of Music boasts some of the most talented students, alumni, and faculty at work in music today and there’s no better place to hear them than a summer evening at the ICA. Enjoy the best of both institutions with HarborWalk Sounds, a free series of concerts featuring rising stars in jazz, world, Latin, and more. Relax on the harbor with a refreshing drink from the Water Café and hot sounds from the coolest music school around. Admission to the ICA is always free on ICA Free Thursday Nights.

July 12: Ítalo Cunha and The Mates

Born in Brazil to a musical family, Ítalo Cunha began playing piano and guitar professionally by the age of 12. Cunha performs a fusion of original songs fusing traditional Brazilian music with jazz, indie, rock, and pop.

Performing since she was 12, singer-songwriter-guitarist Adrianne Lenker and bandmates perform original music with a style influenced by such artists as Pat Metheny, Michael Hedges, Leonard Cohen, and Joni Mitchell.

Cosmodrome is a four-piece band whose style is a forward thinking and eclectic blend of soul, funk, and hip-hop. The enchanting lead vocals of Madison McFerrin intertwine and lock with guitar, bass, and drums to create a sound and live show that is captivating and always groove heavy.

A sensible, groovy, and poetic trio, The Yesberger Band inspires audiences with their jazzy approach to poetry and pop. The group’s unique musical vision has taken them on domestic and international tours including opportunities with Bobby McFerrin, Jamie Cullum, The Temptations, and the Yellowjackets.

In the event of inclement weather, Harborwalk Sounds will move indoors.

An annual favorite, Talking Taste features Boston’s best chefs demonstrating how to prepare some of their famous dishes. Learn trade secrets and sample delectable bites, all while enjoying breathtaking waterfront views of Boston Harbor from the ICA Grandstand.

With a reputation as one of Boston best chefs and restaurateurs, Ken Oringer has achieved national acclaim for his restaurants Uni, La Verdad, KO Prime, Toro, and Coppa. Chef and owner at Toro and Coppa, Jamie Bissonnette is renowned for his knowledge and passion for "nose-to-tail" cooking. His restaurants receive regular accolades from The Boston Globe, Bon Appetit, and The Wall Street Journal.

Husband and wife team Tse Wei Lim and Diana Kudajarova bring a balanced and unpretentious flair to Journeyman, their Union Square establishment in Somerville. Their desire to create a dining experience that is comfortable, intimate, and delicious has landed Journeyman on many critics "best-of" lists.

Known for her appearances on Top Chef, as well as cooking stints in Boston-area restaurants including Rocca Kitchen & Bar, Tiffani Faison’s newest culinary adventure is the Texas-style barbeque joint, Sweet Cheeks. After months of traveling on a barbeque tour of the South, Tiffani brings perfected recipes to her new restaurant in the heart of Fenway.

Craigie on Main has earned raves for "nose-to-tail" cooking, as well as loyal fans of their intimate bar and inventive cocktails. Ted Gallagher, bartender at Craigie on Main, creates original drinks to match the seasonality and creativity of the restaurant, elegantly exploring small craft-oriented ingredients and obscure liquors.

In the event of inclement weather, talks will move indoors.

Special ALL FOUR TALKS package can be purchased by phone or in person only:

Tickets include museum admission on day of each event

About the ICA
An influential forum for multi-disciplinary arts, the Institute of Contemporary Art has been at the leading edge of art in Boston for 75 years. Like its iconic building on Boston's waterfront, the ICA offers new ways of engaging with the world around us. Its exhibitions and programs provide access to contemporary art, artists, and the creative process, inviting audiences of all ages and backgrounds to participate in the excitement of new art and ideas. The ICA, located at 100 Northern Avenue, is open Tuesday and Wednesday, 10 am - 5 pm; Thursday and Friday, 10 am - 9 pm; and Saturday and Sunday, 10 am - 5 pm. Admission is $15 adults, $13 seniors and $10 students, and free for members and children 17 and under. ICA Free Admission for Youth is sponsored by State Street Foundation. Free admission on ICA Free Thursday Nights, 5 - 9 pm. Free admission for families (2 adults + children 12 and under) on last Saturday of the month. For more information, call617-478-3100 or visit our Web site at www.icaboston.org