New Farce Not All That Funny at Chicago's Goodman 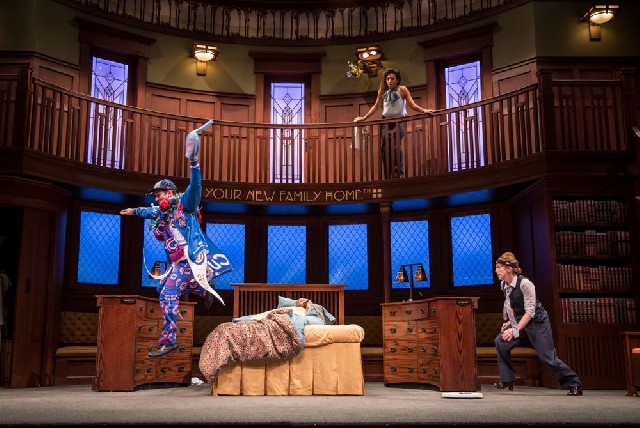 The new farce isn’t all that funny.

Todd Rosenthal's set design for The Hotelman Arms hotel in The Upstairs Concierge is handsome, done in Prairie Style with Frank Lloyd Wright-type stained glass window panels, faux oak staircases, moldings, cabinetry and doors. Even the typography of the "Your New Family Home" motto signage is an arts and crafts font.

The multiple doors and staircases are clues that this is not going to be a drama that would have attracted Frank Lloyd Wright, however. They're signs of a farce to come, as we learned from those witty French farces by Georges Feydeau.

Unfortunately, Goodman Theatre's new world premiere of Kristoffer Diaz's The Upstairs Concierge is not a witty French farce. Its celebrity- and baseball-driven plotline doesn't work as a contemporary comic romp. The plot is a mish-mash and the dialogue is flat and rarely funny.

Diaz, known for his award-winning The Elaborate Entrance of Chad Deity (produced in 2009 at Victory Gardens Theater), says he was inspired by working at a boutique luxury hotel that catered to celebrities. He decided that writing a spoof on our celebrity culture and setting it in a small, confined space would allow for ridiculous physical comedy. Since the play was developed over several years of workshopping and productions, it's hard to understand why no one noticed that something was amiss with the material itself.

The theme involves the arrival of an ace female baseball player (Alejandra Escalante as Rebecca Oaxaca) at the hotel, where she is chased by representatives of major league baseball teams who want to hire the first female MLB player. (For some reason, the playwright identifies her as a bunter, but that would not be good baseball strategy for reasons that I'm not going to go into in a theater review.)

Other celebrity guests are BB, a blogger (energetically played by Jose Antonio Garcia), and Shivery Delicious, a well-known novelist (Sandra Delgado). Starring as Ella Elizondo, the upstairs concierge who aims to please, is Tawny Newsome. The rest of the cast is hotel employees and baseball team reps.

The 10 cast members give it their all and director K.J. Sanchez, along with a movement consultant (Chuck Coyl) and a movement captain (cast member Gabriel Ruiz) choreograph the madness effectively. The timing and agility of every cast member is notable.

The opening night audience found a number of lines and pratfalls to laugh at. Prospective audience members may find this 80-minute comedy just the ticket for chasing the gloom away or topping off a harried workday. I thought it was one lost night of my life.

Goodman Theatre stages The Upstairs Concierge through April 26 in the Owen Theatre, its smaller studio space, at 170 N. Dearborn. Performances are at varying times Wednesday through Sunday. Tickets are $10-40 and can be bought online, by calling 312-443-3800 or by visiting the box office between 12 noon and 5pm (until curtain time on performance days).