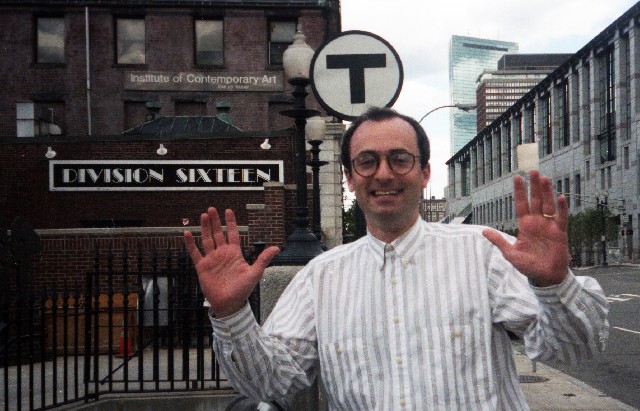 Matthew Teitelbaum in 1993 in front of the old ICA on Boylston Street. Photo by Charles Giuliano. 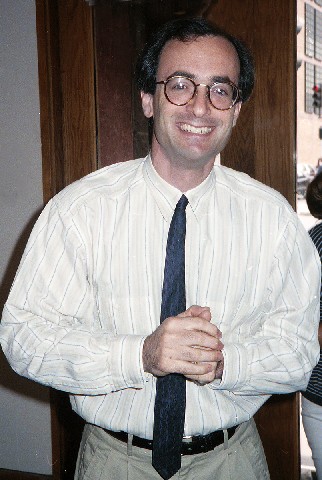 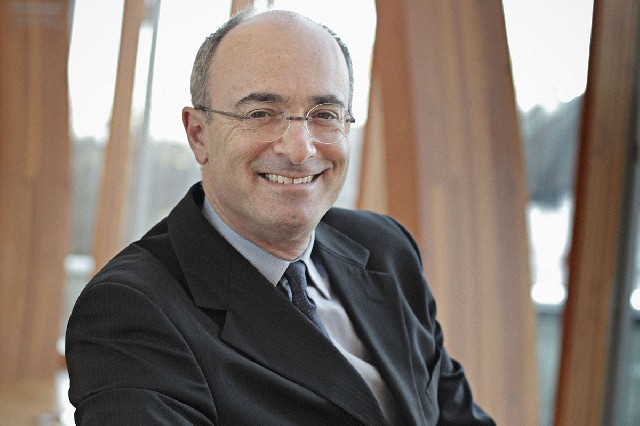 A more recent image of the new MFA director.

It is a pleasant surprise to learn that the smart, insightful and accessible former Institute of Contemporary Art curator, Matthew Teitelbaum, is returning to Boston as the 11th director of the Museum of Fine Arts.

On August 3 he will take over from Malcolm Rogers who, with Perry T. Rathbone, was one of the longest serving and most influential MFA directors. Rogers will be remembered for bricks and mortar and the $500 million he raised for the Lord Norman Foster designed expansion and renovation.

Starting at 59 it is unlikely that Teitelbaum's tenure will match those of Rathbone and Rogers.

While he will have broad duties as director it is anticipated that Teitelbaum will have a significant impact on one of the most glaring weaknesses of the museum its less than world class collection of modern and contemporary art.

Rogers made an unfortunate choice of curator, Cheryl Brutvan. Noted for pedestrian taste Rogers was known for mucking about with crowd pleasing special exhibitions and mostly mediocre modern and contemporary acquisitions. As a result the museum languished in this field for yet another generation.

Highlights of Rogers inspired exhibitions include: Guitars, the Cars of Ralph Lauren, photographs by Herb Ritts and Yusuf Karsh as well as a project for Wallace and Gromit. A towering glass bauble by Dale Chihuly remains as a reminder of a special exhibition by the populist sculptor.

When the museum reopened there was a significant change with the Linde Family Wing for Contemporary Art. It tripled the space for contemporary art. The department is now under the capable direction of the widely respected Edward Saywell.

The critical response to the newly installed contemporary collection was at best mixed.

One of the major challenges for Teitelbaum will be to change the attitude of Bostonians and in particular to inspire potential collectors and patrons. Part of that will be a commitment to significant and insightful special exhibitions.

A perception is that Rogers built the new MFA and that the next director will get to use its upgraded resources.

The era of great acquisitions, however, has lapsed.

The occasional Old Master masterpiece that comes to market is beyond the resources of the MFA. The top bidders are the mega rich Getty or the Crystal Bridges of Alice Walton. One cannot compete with the oil rich Sheiks who are assembling collections and opening museums. Even the contemporary market is out of reach for A list artists suitable for a world class museum like the MFA.

It will be interesting to see how Teitelbaum approaches this conundrum.

We remember him well from his time at the ICA under its director Milena Kalinovska.

Following David Ross she was also unable to find an adequate home for the ICA which outgrew its space on Boylston Street. That occurred under Jill Medvedow who replaced her. In terms of programming, however, the ICA of Kalinovska was far more interesting and adventurous than it is today. There were some ambitious miscues however with "Elvis and Marilyn" and "Malcolm X." More challenging were historical shows like the survey of feminism in art "Inside the Visible." There was an emphasis on women artists like one person shows for the British artist, Rachel Whiteread, or the Italian, Carol Rama.

From 1989 to 1993 Teitelbaum was a brilliant member of the ICA team. His notable exhibitions included “The Bleeding Heart,” which examined the image of the heart in art from Pre- Columbian to Frida Kahlo and “Montage and Modern Life: 1919-1942.” The latter exhibition was a dense overview of the confluence of modernism and propaganda during the era of WWII. It was intriguing that even Fascism used then avant-garde aspects of photo collage, futurism and stylistic approaches banned as "Degenerate Art" by Nazi Germany.

These were the kinds of scholarly, meticulously researched exhibitions that push to the brink the curatorial resources of small museums like the ICA. There is little of that commitment and risk taking in contemporary programming today that focuses on the work of currently successful and prominent artists. Unfortunately, only MoMA and the Guggenheim have the resources to take on historical overviews. Even they are lapsing. A case in point was the Whitney retrospective for Jeff Koons or the current MoMA Bjork scandal.

Teitelbaum has been at the Art Gallery of Ontario since 1993, first as chief curator, before being appointed director in 1998. He worked with architect Frank Gehry increasing gallery and exhibition space by 47 percent. In order to do this he raised $306 million. The AGO had some 862,000 visitors in fiscal year 2013-14.

His tenure at the AGO was significant enough to earn him the top position at one of the world's foremost museums. He mounted modern and contemporary exhibitions of work by Picasso, Ai Weiwei, Francis Bacon, and Henry Moore. The current “Jean-Michel Basquiat: Now’s the Time” is the artist’s first major retrospective in Canada. He helped secure a gift from collector Ken Thomson of renowned Gothic and early Renaissance ivories. He focused on contemporary acquisitions including works by five leading Canadian artists.

As director of the MFA there will be many challenges. The Board is completing a five-year strategic plan. There are decisions about how best to develop the neighboring Forsyth Institute building. Currently it is rented to Northeastern University. The museum is in the second year of a three-year, $200 million capital campaign.

For those who follow the MFA it is anticipated that Teitelbaum will bring a more accessible and less autocratic management style.

Under the mantra of "One Museum" Rogers fired department chairs, curators and staff that resisted his leadership. He broke up the fiefdoms of the old boy network of curators.

The trend of mega management and operating the museum as a business started with board president George Seybolt who pushed out Rathbone on the pretext of the Raphael Scandal. The administration of Rogers followed the template of Seybolt more than the curatorial finesse of Rathbone.

Starting in August Teitelbaum will have the immediate priority of becoming acquainted with the curators and vast collections. It is likely that this will also be a healing process following the climate of fear generated by the Rogers years.

On every level he is the right man for an exciting period of transition and change.