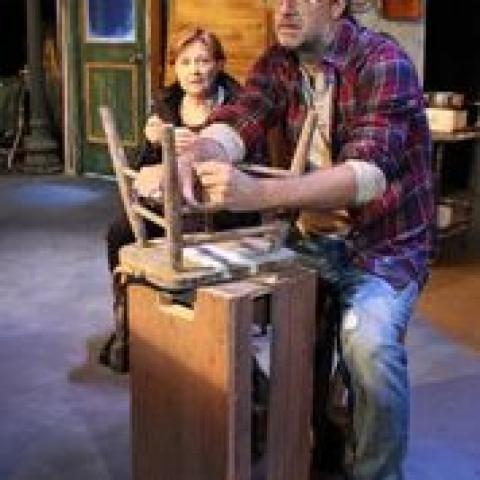 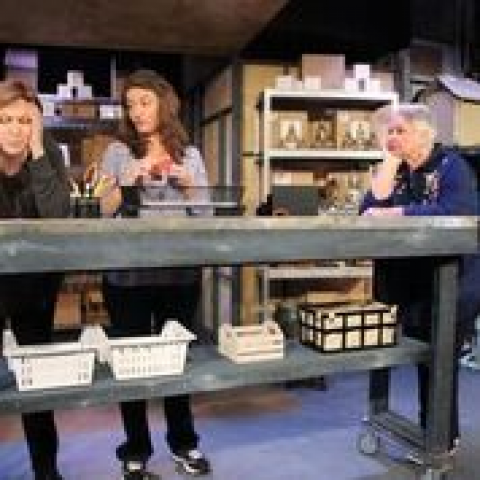 (Photo credited to FAU Theatre Lab) It's hard to interest Bari (Laura Turnbull) in much of anything in Be Here Now. Pictured from left are Laura Turnbull as Bari, Gretchen Porro as Luanne and Elizabeth Dimon as Patty. 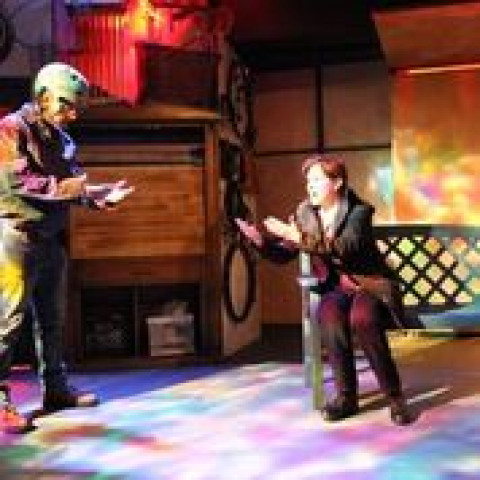 (Photo credited to FAU Theatre Lab Bari (Laura Turnbull) experiences a seizure-like experience as a result of her condition. Pictured at far left is Mike Cooper as Desmond Gallant.

Bari has a pre-cancerous brain tumor – which she considers a treasure.

From Bari’s perspective, her growth is kind of like a relaxing massage with the sound of soothing music, ocean waves and birds in the background.

This type of tumor causes symptoms of euphoria and sexual arousal. From Bari's perspective, it's just what she needed to turn her life around. She finally and ironically is now happy and sees things clearly.

The young woman knows she might ultimately die from the disease. But her newly-developed positive outlook on matters differs markedly from someone who would consider the condition a death sentence and dwell on his/her eventual demise.

Life is all about attitude and how you perceive what you encounter. This is true whether it be a stack of garbage or a deadly disease, in Be Here Now, Deborah Zoe Lauffer’s life-affirming, soul searching, funny and touching new play.

This absorbing rendition, featuring first-rate performances and technical work, comes just one month after the play’s world premiere at Cincinnati Playhouse in the Park. That company commissioned the piece.

Theatre Lab, which conducted a reading of the play two years ago, has mounted a production of which it can be proud.

Bari, by contrast, feels good about nothing throughout a portion of Be Here Now’s first half or so.

These days, people might pay no attention to others with such sulky, bitter outlooks as Bari. Many may view such folks as outcasts, as easy to ignore as garbage piled up on the side of the road. It just sits there, hardly calling attention to itself.

That is, unless you are Mike Cooper, who pays as close attention to trash as a devoted college-bound high school student who needs a passing grade to get into a much-coveted college.

Mike sees garbage as an opportunity to make something useful out of what others might call “nothing.”

The notion that we can either ignore or further explore things which often go unnoticed is communicated nicely in Michael McClain’s scenic design.

Piles of items rest on the corners of the stage, symbolizing how easy it can be to pass it by.

Meanwhile, the middle of the stage is spacious and open. This might suggest that there’s nothing distracting us or hindering our view from looking closer in places we’d otherwise not notice.

In playwright Annie Baker style, Laufer doesn’t rush to reveal everything about her characters at the outset. As Be Here Now progresses, we learn just how much use Mike has made out of “trash.”

Not only that, Laufer reveals how Mike’s accomplishments with refuse has earned him surprising, even shocking accolades.

The playwright uses vivid symbolism. Bari is like (and must feel like) the trash that everyone but Mike regards as waste to prepare for disposal.

This man might be an unusual and lauded artist, but he’s also a lost soul.

The tale of Mike and Bari is a funny, bittersweet one that forces us to re-examine ourselves. Their sometimes touching, often uncomfortable journey together makes us look at things and people from a perspective we might not be used to – and might not be comfortable with.

Live theater is great at challenging our comfort levels.

Some audience members might feel overwhelmed with the many ideas and themes Laufer presents.

They include quantity vs. quality of life, appreciating the simplicity and beauty in the world, the effects and power of positive vs. negative thinking, the pursuit (and elusiveness) of happiness and the power of community, support and companionship.

As serious as the play seems, there’s plenty of humor. As a result, the piece is never depressing.

Laufer herself has directed this production with sensitivity and detail. She elicits commendable performances from a four-person cast, a vast improvement from the mostly one-dimensional acting in the Cincinnati Playhouse in the Park production.

One of the only minor negatives of Theatre Lab's rendition is that voice of a yoga instructor in the beginning needs to sound more soothing. She also needs to speak slower to let the words really seep into the participants' minds.

One member of the yoga group is Luanne Cooper (Gretchen Porro). The performer’s fun-loving and playful Luanne conveys a youthful energy, but Porro also endows the character with humanity. In Cincinnati, the actor came across as too cartoonish.

Elizabeth Dimon is more multi-faceted as Patty than the Cincinnati performer was. A wide-eyed Dimon conveys a commanding, somewhat stern demeanor. However, she also reveals a playful, caring side of her, even if it is “tough love.” Dimon’s Patty has a zest for life and she’s careful not to turn the character into a mean person.

Desmond Gallant’s Mike begins as a carefree, cheerful eccentric. But later on, his torn and  uncomfortable feeling around Bari is palpable. Gallant, who disappears into the role, makes us clearly see this is a man used to a solitary existence. We watch him try to force a smile so as not to hurt Bari’s feelings. Gallant’s equally effective when Mike panics or comforts Bari. It’s an all-around skillful performance filled with spontaneity.

Ditto for a sour-faced Laura Turnbull as Bari, who makes the character bitter, sarcastic, weary and hopeless. The actress avoids turning Bari into an uncontrollably crying, self-pitying woman, which could turn us off. It wouldn’t hurt, however, for Turnbull to shed a tear or two.

Turnbull later segues nicely into a woman filled with wonder, curiosity and playful humor. Her episodes of “clarity” brought on by the tumor are completely believable. They’re accentuated by Matt Corey’s sound effects, which carry an air of mystery and at other times a jarring noise.

One of the play’s weaknesses is that Laufer could arrive at Bari’s plight more quickly in the beginning.

With that aside, Be Here Now serves as a much-needed reminder, especially these days, about life’s fragility, unpredictability, the power of the mind and our perception to affect our quality of life.

Be Here Now runs through April 22 at Theatre Lab on the FAU Campus in Boca Raton. Performances are 7:30 p.m. Thursday through Saturday and 3 p.m. Sunday. Log onto http://fau.edu/artsandletters/theatrelab/ or call (561) 297-4784.