Levine Returns at Carnegie and Met 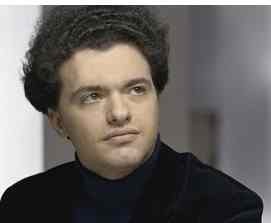 Evgeny Kissin, one of the world’s great pianists.

Kissin’s body breathes as he performs. Back.... 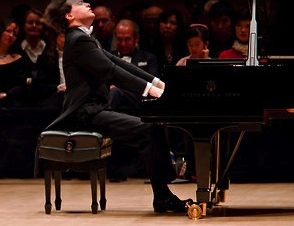 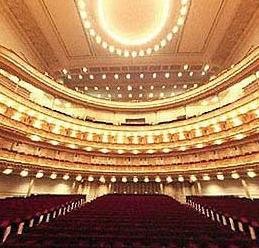 Carnegie Hall. The preferred venue for performers and audiences.

James Levine returned to Carnegie Hall this week after missing three concerts with the Boston Symphony Orchestra in March.  Listening to the Metropolitan Opera Orchestra’s performance under his baton reminds us what a consummate musician the Maestro is and how much we miss  when he is unable to conduct.

On April 6, we heard him conduct a searing Wozzeck at the Metropolitan Opera.  The shattering performance of Waltraud Meier as Marie is a measure of his special skill in bringing forth the best in singers.  During curtain calls, taken sensibly from the pit, he blew dozens of kisses to the star whose performance easily rivaled Hildegard Behrens’.

A different kind of artist, the pianist Evgeny Kissin needs to be left alone to hit his heights.  Levine gave him his way in Chopin’s First Piano Concerto.  At 12 Kissin had played Chopin’s concertos with the Moscow Philharmonic Orchestra.  He was unknown until that evening and a legend by the next morning.

Of that performance it is said that Kissin gave “…the impression that Chopin's spirit was talking through Kissin…” Kissin remembers only receiving a big toy car as a gift.

Kissin does remember every minute detail of a first meeting with conductor Herbert von Karajan.  After performing Chopin's Fantasy better than he ever had before, he says,  "I looked at Karajan, got up, made a few steps toward him and saw him giving me an air kiss, then taking his sunglasses off and wiping his tears with a handkerchief." Karajan's wife said, "I have been married to him for 30 years and have never seen him so moved."

While saying goodbye to Kissin's mother, Karajan pointed at the 16-year-old pianist and said: "Genius."

On Sunday, we were privileged to share the genius, in a perfect execution of Chopin’s First Piano Concerto, and in a delightful encore, contrasting flashy displays with a subtle rum-pah bass that made me smile.   Surely Carnegie displays his sound at least as well as any venue.  Watching him on another stage in the center of rising circles of an audience seated around him, I wondered what the ‘surround sound’ architect Gehry always uses in his concert halls would reveal in Kissin’s hands.

Like Levine’s brilliant ability to make an orchestra breathe within strict constructions of the tempi, Kissin, as he moves into the piano and then pulls back, gives the impression of breathing with his keyboard articulation. It is perhaps part of his un-analyzable music making.

Earlier this week, the Norwegian pianist Leif Ove Andsnes performed some delightful Schoenberg small piano pieces at Carnegie.  We experienced the same almost carefree play with notes in this afternoon’s symphonic performance for Five Pieces for Orchestra.  These pieces of infinite variety opened the program.  Levine miraculously held diverse tones together while revealing the various colors, rhythms and moods.

Brahms Second Symphony concluded the program.  Brahms came to the symphonic form late, some say intimidated by his predecessor Beethoven.  The Met Orchestra admirably displayed Brahms’ mastery of the form and the originality he brought to it.

It was one of those afternoons at Carnegie where you are simply glad to be alive and in the Hall.

Signs for the Tanglewood summer were hopeful.  Levine conducted Wozzeck on Wednesday clocking in at 1:40 with only two brief breaks between scenes 5 and 6 and 10 and 11.  Continuing difficulties with staying on his seat may be more a reflection of the passion with which he conducts than an indication of his health.  At Carnegie, he entered and exited the stage on his own, pushing a walker and assisted by a cane.  At the Met he walked in with a cane and exited unassisted down stairs.  In both venues he seemed comfortable.

The Maestro is now managing whatever disability he has.  His schedule remains the same at Tanglewood, and with his apparently newfound sense of what is and isn’t possible, he may well be there for the summer.  After all, he conducted Wozzeck at the Met on Saturday evening, and this concert at Carnegie the following afternoon.  He is rehearsing Walkere at the Met as we write.   If this is a schedule he can manage, there is great hope not only for Tanglewood, but for all the future productions we wish he would conduct.