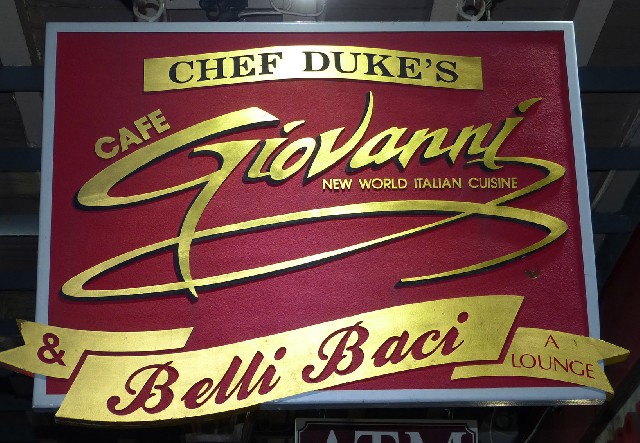 Giovanni in the French Quarter. 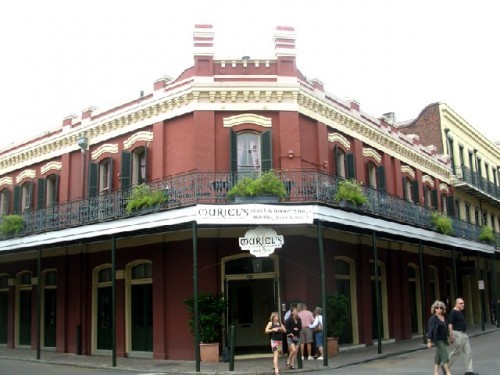 We had dined at Muriel’s on a prior visit. 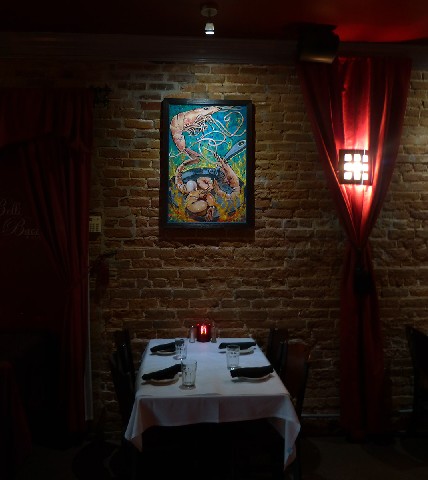 The bar side of Giovanni. 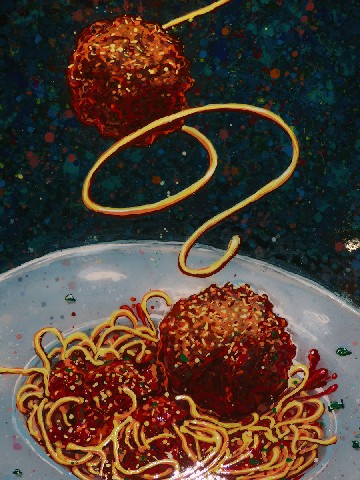 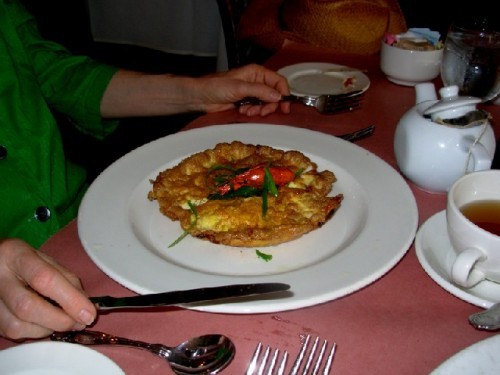 Astrid had enjoyed her dish at Muriel’s. 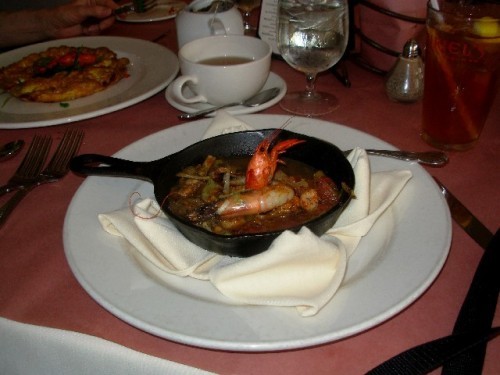 The seafood was missing in action in my dish at Muriel’s. 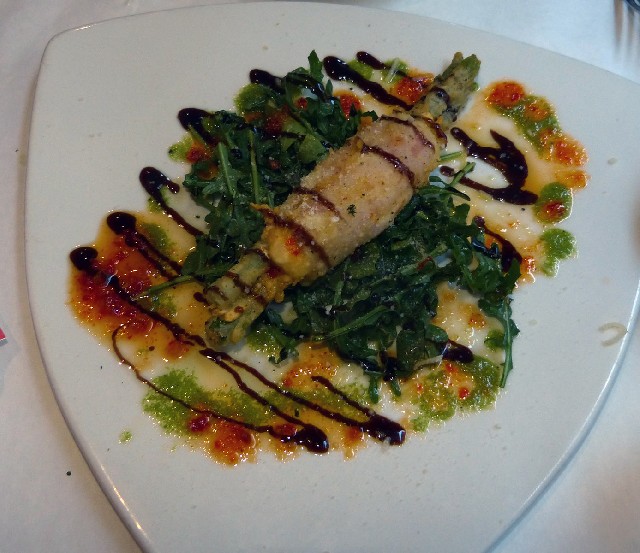 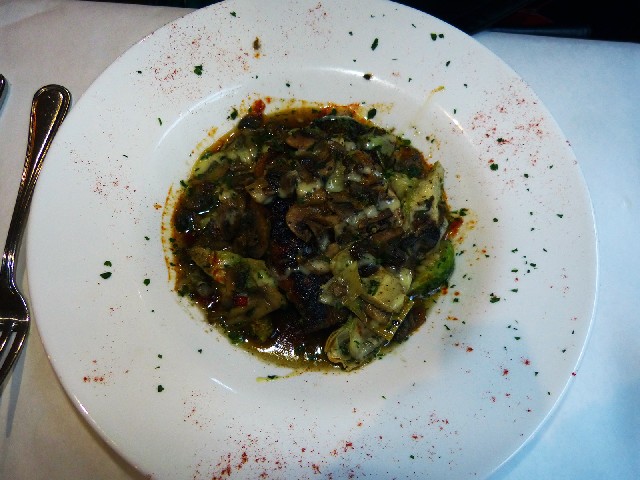 Astrid’s Pesce Venetian was a mess on a plate. 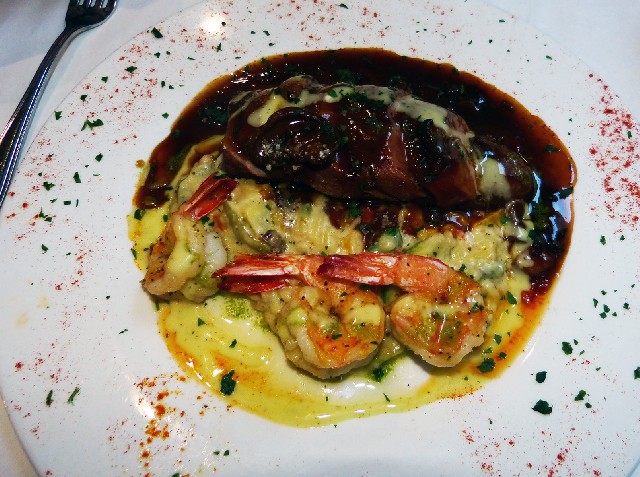 My shrimp and duck combo was so so. 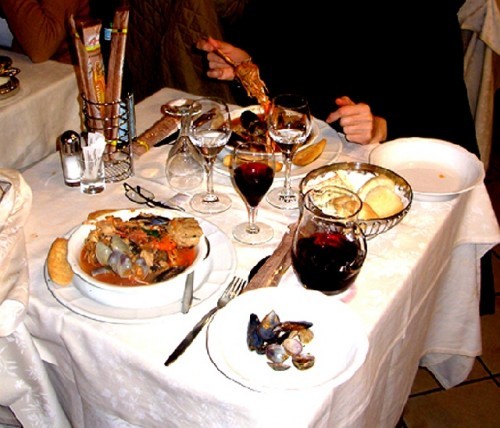 Memories of dining in Venice. 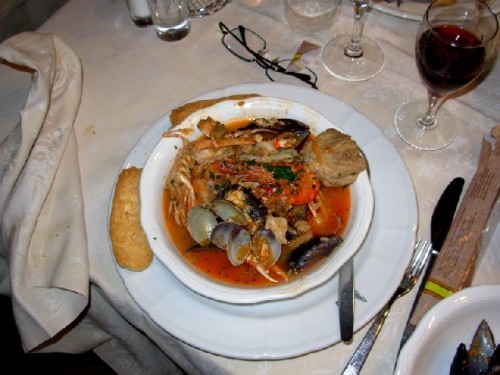 The seafood dishes in Venice were truly amazing.

Prior to our recent visit to New Orleans we asked for recommendations from friends who knew the city and its cuisine.

There were interesting suggestions but a tight conference schedule kept us confined to dining within walking distance in the French Quarter.

Another limitation was getting in and out of busy restaurants in time for performances.

That often translated to Plan B as we made our way from the Crowne Plaza on Canal Street then around the corner to frenetic Bourbon Street.

There are world class restaurants in the Crescent City but we decided that the famous ones were above our pay grade.

During a breakfast conference meeting our friend Herb described one such lunch at Antoine's. The service, food and ambiance were in his words "Out of this world."

Asked what it had cost the answer was about $125. Solo.

One was Muriel's near Jackson Square.

We checked it out but realized that while enticing we had visited and written about it during our 2008 visit.

Here is a quote from that review. "We dined at Muriel's on the edge of Jackson Square. The ambiance and service were superb but the cuisine proved to be less than thrilling. Astrid enjoyed her soufflé but my seafood casserole had invisible oysters, tiny shrimp, a crawdad garnish, and was salty to the degree of being almost inedible."

The other recommendation was Cafe Giovanni.

On our return from a long walk to Jackson Square we found it on the edge of the madness in a relatively calm fringe of the Quarter.

We perused the menu. In general Italian restaurants mean pasta. That means gluten so Astrid checked to see if there were enough options.

There were other plans that night but we considered it for later in the week.

That occurred on an evening of Tennessee Williams readings at the venerable Ursuline Convent near the French Quarter.

Since there was open seating we needed to find an early dinner within walking distance.

Giovanni Cafe was sparsely occupied when we arrived.

We chose a seat next to the window.

That was not disappointing as a group of Hare Krishna cats with their Indian entourage paraded by chanting.

There is always a spectacle to be enjoyed in NOLA.

Inside we were serenaded by sopranos taking turns singing opera and show tunes accompanied by a pianist.

A woman from a group seated near us dispatched herself well and was greeted with applause when she rejoined her table.

I considered offering my Ezio Pinza flavored "Some Enchanted Evening" but chickened out.

Perusing the menu Italian cuisine with a Gulf twist the waiter was attentive and helpful.

pumpkin seed & basil pesto ($12.95) lived up to expectation. It was an interesting variation on asparagus which we enjoyed sharing.

It raised expectations for the rest of the meal.

The dish Pesce Venetian evoked memories of meals in Venice at Ristorante San Trovaso, Dorso Duro 967, Telephone: 041 523 9835 E mail: Giorgio.cassan@tin.it around the corner from our hotel the former Don Orione monastery. Steps from the Accademia, with an obligatory stop at the wine bar next to a canal with its one euro snacks, it was fabulous nightly dining. I would return to Venice not for the Biennale or San Marco but for another Venetian seafood dinner at that wonderful, affordable restaurant.

What was served to Astrid was a total mess on a plate. On the base of mushy, texture-less risotto was a brown on brown mélange where ingredients were impossible to recognize. She swears that the chef took the night off. It's just not possible that such an unattractive looking dish could be featured on the menu. The fish plopped on top was crispy and adequate but overwhelmed but its combination with a bayou of elements.

Fine dining should delight the eye in presentation as well as excite the palate. For her this dish did neither and was a resounding disappointment.

Even the waiter clearing the table seemed surprised by the pool of oil left at the bottom of the plate.

The combination of duck and shrimp was good but not great. It was nice to try a variation but actually I should have stuck to the instinct to order the traditional preparation. Again the generously applied, shall we say slathered, sauce denied a sense of the texture of the duck. I offered a shrimp to Astrid which left me with two that proved to be unremarkable. Overall I would have preferred the duck and shrimp with perhaps the sauce on the side to be applied as I wished.

The way the dish was presented left no such options.

We had tried Giovanni in hope of finding a confluence of Italy and Louisiana.

Instead we walked out longing to return to Italy.