I Will Look Forward to This Later at New Ohio

Both Funny and Tragic 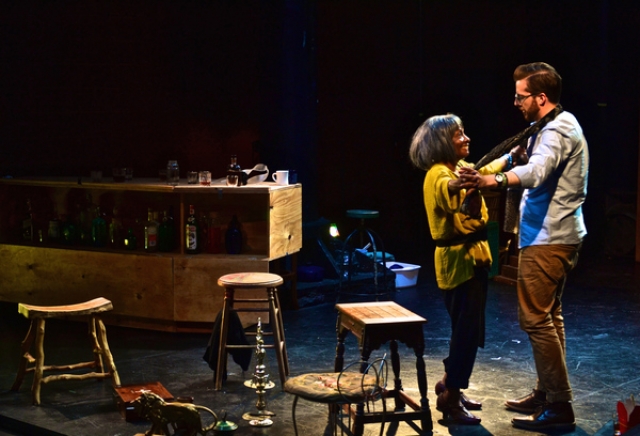 As the lights go up on the spare set of “I Will Look Forward to This Later,” three figures are seated with their backs to the audience, a long rectangular box in front of them. One of them, Robert Holloway (Edward Bauer) steps up to a mic and addresses the audience, thanking them for coming and eulogizing his father, Wyatt Holloway (James Himelsbach). The renowned author has just died unexpectedly. His words are respectful but ironic, and clearly their father/son relationship was not the best or the closest. After all, Robert is a critic – not an artist’s favorite person.  He ends his tribute with the words "Dad, you were kind of a son of a bitch!"

Robert’s brother Sam (Ben Beckley) has a different story. He offers "18 Iterations" as his tribute -- an attempt at a form of poetry. For Sam, like his dad, is a writer, just not a respected or successful one. It is a fact that everyone in the family reminds him of on a daily basis. The third figure is Wyatt’s wife, Betsy (Linda Marie Larson), a woman who has suffered the curse of being paired with a monomaniacal, egotistical artist for many, many years. She seems more relieved than bereaved when she offers her eulogy.

“I Will Look Forward to This Later” tells the tale of how this family – as well as Wyatt’s two artist lovers, ancient Agatha (Vinie Burrows) and youthful Miranda (Emily Louise Perkins) – cope with the loss of such a larger-than-life figure,. They are forming new connections to each other, redefining themselves, and, in one case, finding it impossible to go on without the great man.

The play also pays homage to traditional Kabuki drama, not just in the theme (sons are expected to take up where fathers have left off), but also with the presence of a "restless ghost." Wyatt himself is that ghost, who comes back to lecture and criticize his sensitive writer son, a troubled soul who is immobilized by writer’s block and booze -- perhaps not in that order.

At times hysterically funny; at others heartbreakingly sad, “I Will Look Forward to This Later" ultimately shows how very, very destructive family relationships can be. When each family member is so sublimely focused on self and artistic expression, they are oblivious to the harm they are doing, especially to their most fragile member.  And when that person, someone they supposedly love, is hurtling towards self-destruction, they are simply incapable of seeing it until, of course, it is too late.

Directed by Jess Chayes, with Text by Kate Benson and Emily Louise Perkins, Dramaturgy by Stephen Aubrey, and Movement Direction by Kate Rose McLaughlin, the Design team of Nick Benacerraf, Asa Wember, Kate Fry,  and Christina Watanabe uses clever conversions of the coffin into a bar for quick scene changes and dramatic, exaggerated costume touches.  This gives an otherworldly feeling to the scenes with the ghost of Wyatt.  The performances by Bauer, Beckley, Burrows, Himelsbach, Larson, Perkins and Johnstone (as a Radio Announcer) are all outstanding.