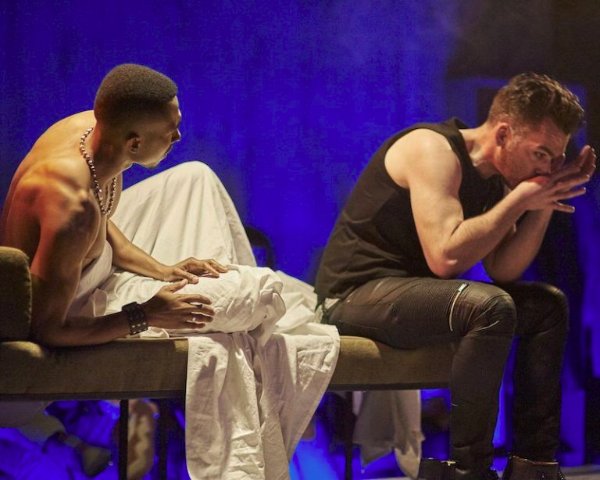 Casteallo and Reitsma as Johnny and Paul. Photo by Lee Miller.

Paul (Joel Reitsma) is a rock star, with rock star habits and ego. He’s now in Moscow, nearing the end of a long tour and faced with going home to London. He and Johnny, his bandmate, (played by Dushane Casteallo) are getting ready to perform in concert.

Birdland, written by Simon Stephens and directed by Jonathan Berry, is a fast-moving, personal look inside the rock music business. Steep Theatre’s new production, the U.S. premiere, shows the trappings and atmosphere of the business and the life of its leading character, who is on stage for the entire two-hour-plus performance. Reitsma plays Paul with guts and panache, but he’s not someone you will fancy having a beer with.

We learn a little about Paul in his meeting with Annalisa (Cindy Marker), a journalist. He espouses his personal philosophy, which is mostly about the money he has amassed playing to huge crowds at arenas and stadiums all over the world.

“This is the best time we’ve ever lived in. There is more happiness now than there ever has been before…. We are richer than we’ve ever been before…. Everything can be quantified. All worth can be quantified. Artistic worth. Human worth. Material worth. Everything. Some food is simply better than other food. Isn’t it? Some clothes are better than other clothes.”

Paul throws money around freely. He’s a jerk to women. He’s an asshole to his friends. He chastises Johnny in front of party guests in Paris. “Johnny. Never. Ever call me mate in front of anybody ever again. If you do I promise I will have you killed.” He sleeps with Marnie (Lucy Carapetyan) the girl Johnny loves. He sweet-talks Jenny (Aila Peck) a hotel employee, into traveling with him and then verbally abuses her. But every once in a while, a shadow of the real Paul comes through and you know there’s a person inside. His father, from whom he’s been estranged, comes to see him when they get to the O2 Arena in London. Alistair (Jim Poole) lives a working-class life and is proud of his son’s achievements. When he needs to borrow money to pay off a debt, Paul quickly agrees to help out his father.

Is Paul’s success a Faustian bargain that meant he gave up his soul to play his guitar in front of 75,000 people, to be recognized everywhere by strangers with smartphones, to persuade young women to sleep with him? The financial bargain is with the recording and touring companies, who pay huge advances on the basis of prospective ticket sales and royalties. (These days, royalties are a small part of a musician’s income.) If those sales don’t flow in, and if the musician is too profligate with the money he thinks he already owns, big problems arise.

Reitsma plays Paul with selfish self-absorption and charisma. He’s a volatile personality, partly fueled by alcohol and ocular injections of cocaine by his manager, David (Peter Moore), who doesn’t seem to discourage Paul’s spending habits. (As in buying a helicopter.) Berry achieves perfect timing with his cast as scenes swiftly change from one venue to another. Excellent performances by Casteallo and all the supporting characters—Peck, Carapetyan, Marker, Moore, Poole, and Amber Sallis as a young groupie—make this a solid production.

Joe Schermoly’s scenic design is based on a center stage with audience on two sides and cast members seated off stage on the other two sides. Pieces of modular furniture are quickly moved around to serve as chairs, beds and tables as needed. Lightly is smartly handled by Brandon Wardell with sound design by Thomas Dixon.

Stephens has said that Birdland is influenced by Radiohead’s OK Computer tour in 1997 and the rockumentary, Meeting People Is Easy. Stephens said in an interview, “Thom Yorke’s very present in Birdland.” Like Yorke’s, Paul’s band went from venues of 2,000 to 20,000 and 75,000 over a short time span. “You watch him lose all sense of self.”

Music has played a major part in Stephens’ life. He played in a post-punk band, the Country Teasers, for 12 years and at one point, toured in support of Franz Ferdinand. The title of the play is from Patti Smith’s song, “Birdland,” about a father and son, from her award-winning studio debut album, Horses (1975).

Reality check. Paul’s story is emblematic of the way musicians have been handled by managers and recording companies. The situation is better than it was in the early days of blues, R&B and rock and roll. At least one musician signed his first managerial contract on the hood of a car without reading it. The way that worked out is a legendary part of Bruce Springsteen’s career. And Leonard Cohen, even though a veteran performer, was defrauded in his late 70s by his manager who stole $5million from his personal accounts and investments and forced him back to touring to raise money. (I’m thankful for that, because otherwise I would never have seen Cohen play live.)

Today most successful performers and athletes know they need competent support: a manager, an attorney, a financial adviser. Does Paul’s manager know about his financial problems and doesn’t advise him to change? Or is the problem that Paul doesn’t pay attention?

Birdland continues at Steep Theatre, 1115 W. Berwyn Ave., through May 12. The production runs about 130 minutes with no intermission. Tickets are $27-38 for performances Thursday-Sunday.