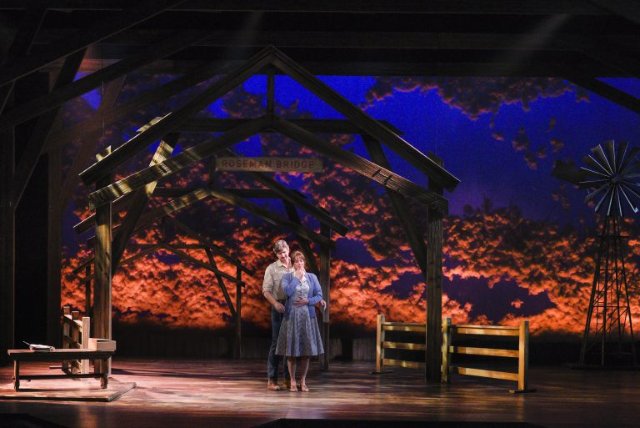 Rob Richardson as Robert, Joan Hess as Francesca. All photos by Kevin Berne. 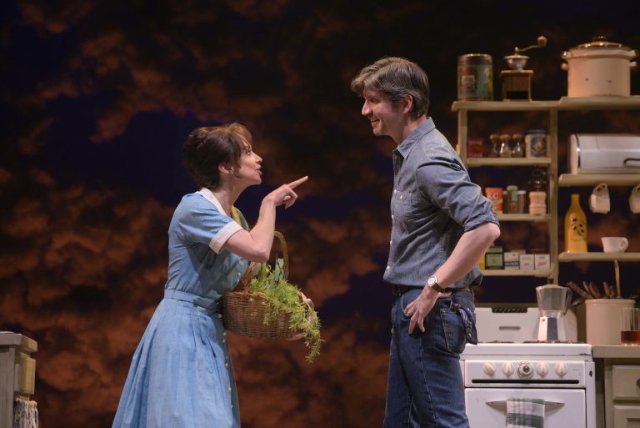 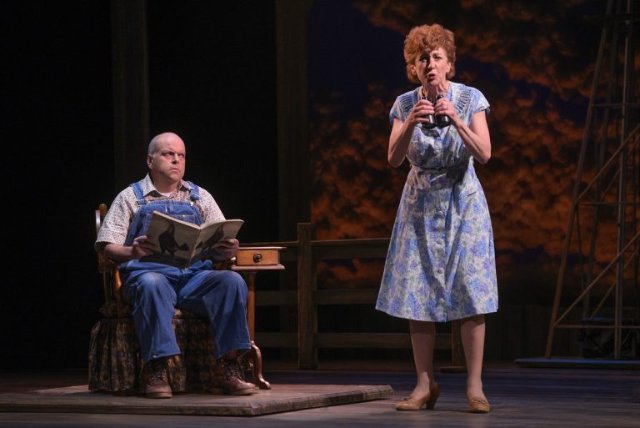 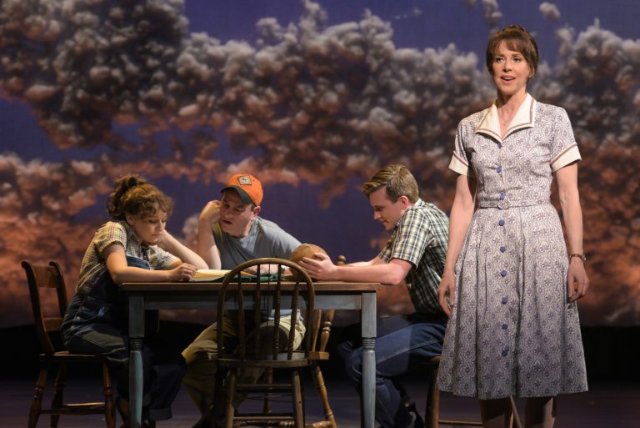 “You could have driven into someone else’s driveway.” These words summarize not only the randomness of events that leads to a torrid but compassionate love affair in Bridges of Madison County, but to life itself. Human beings commonly wish to believe that our locus of control dominates the outcomes of our lives. In reality, we encounter myriad of unplanned events daily, and while the bulk are inconsequential, the occasional one is profound. Some are called to war. Some stay home. Some incidents will leave an indelible mark – on one’s psyche, in one’s memories, with one’s relationships, and more.

Francesca was a war bride from World War II. Swept away from the vibrant and teeming streets of Naples, she has spent the last two decades as probably the only Italian in the alien world of the cornfields of Iowa. She has adapted as a wife and mother to the rhythms of rural American life, but that includes hours of loneliness and drudgery at home. Unlike her neighbors, her past and some of her heart is a world away, but the only visible symbols of her heritage are an espresso coffee maker and the fennel she grows in her garden.

Robert is an uninvolved wanderer. He is divorced and out of touch with his ex as well as with his parents. A photographer for National Geographic, he keeps a place in Washington state but mostly lives out of a pickup truck, moving from one shoot to another. Seeking directions to the last of Madison County’s covered bridges that he plans to photograph, he knocks on a farmhouse door. Francesca’s husband, son, and daughter are at a livestock show in Indianapolis, and she is receptive to company and anything that takes her beyond the monotony of her existence. Robert can’t remember the last time he’d had a home cooked meal or not been outside the moment with a camera between him and life. All the stars align, and a brief encounter ensues.

Bridges is one story among many that reveal a paradox in the American character. Although younger generations have become substantially libertine, our history is one of strong commitment to monogamy with strictures against any form of sexual relationships outside of marriage. Yet the literature is full of out-of-wedlock love affairs, and for the greater part, the audience sympathizes with the “sinners.” So it is that we care for Robert and Francesca, even though her husband Bud is a decent man.

Apart from the love story, we get a snapshot of farm life through Francesca’s family at home and on their trip. The ’60s were a major transitional era, and the kids confront decisions whether to stay on the farm or leave and how to deal with social change. We also meet the stereotypical nosy neighbors.

The novel Bridges of Madison County was wildly successful, and the movie fared well. Although the musical received a number of awards and nominations, its Broadway run was modest. It has a great many assets, but perhaps it was too schmaltzy for the New York audience, and that criticism is quite legitimate.

Yet under Robert Kelley’s direction, it is extremely well crafted schmaltz with excellent production values that should appeal to a broad audience. Wilson Chin’s scenic design provides several thoughtful sets, including the charming skeleton of a covered bridge dropped down from the fly. The score is replete with lovely ballads that propel the storyline, though there is a certain sameness of composition in the overall – exceptions being the upbeat state fair music and a notable and unexpected gospel/blues number near the end.

The two leads work well together. Rob Richardson has the perfect weathered and worn look and the laconic speech of a long removed Texan. Joan Hess provides the requisite emotion power and singing voice for her part. Though she has played the role before, she doesn’t have the typical look or accent of a Neopolitan. Timothy Gulan fits well as the solid but colorless Bud, while the scene stealer is Maureen McVerry with a great comic turn as the ditsy neighbor.

Bridges of Madison County is based on the novel by Robert James Waller with the book of the musical by Marsha Norman and music and lyrics by Jason Robert Brown. It is produced by TheatreWorks Silicon Valley and plays at the Mountain View Center for the Performing Arts, 500 Castro St., Mountain View, CA through April 29, 2018.