Capriccio at the Metropolitan Opera 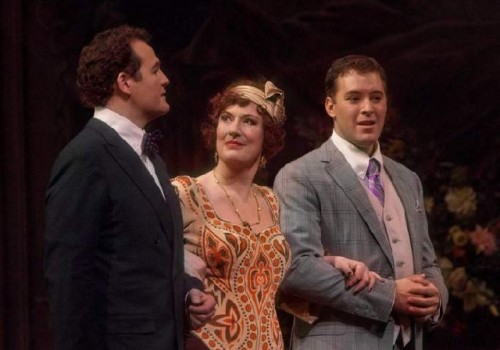 For a moment, Sarah Connolly, a wonderful mezzo, gets Fleming’s men. 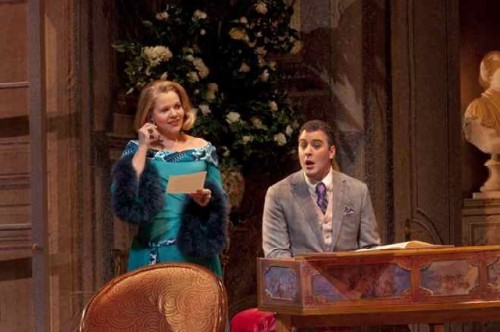 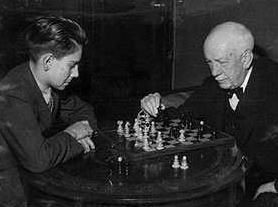 Toward the end of his life, about the time Strauss wrote Capriccio, he plays chess with his grandson.

At the Metropolitan Opera through April 23
In your local theaters in HD, April 23


Cast in order of appearance

Renee Fleming is the Barbara Streisand of opera, powerful enough to surround herself with talented and handsome men in the productions she undertakes.  With her beautiful, bell-like tones and charming presence, Fleming as Madeline will be as delightful in the HD transmission as she is in the house.  She gets the men she deserves.

Besotted by the Fleming character, Joseph Kaiser sings the tenor role of the composer in lovely lyric lines.  Russell Braun sings the baritone poet as a powerful rival.  Other cast members included Morten Frank Larsen, a striking baritone, in a Met debut performance as Madeline’s brother.

Bass Peter Rose was arresting as the impresario, who gets the best male singing role and makes the most of it.  Barry Banks sang the role of an operatic tenor.  He gave great pleasure in Armida and also Don Pasquale this year.  He is a Met stalwart who is to be treasured.  Here Banks is part of an amusing duet and provides insights into the problems of being upstaged by a diva.  The role of dance in opera is suggested by talented dancing clowns.

The production is set in the 1920s.  The salon/living room is spacious and elegant, but one wished for a somewhat more intimate occasion for this intimate opera.  This will, of course, not be an issue in HD, which will reveal details like the heroic busts, angelic ceiling paintings, and a gorgeous harpsichord.

For opera aficionados, the debate on stage about the predominance of the word or music in the operatic form is engaging and often humorous.  This larger than life form is easy to satirize.  In this case, of course, the satirist is one of opera’s great composers.

In a recent discussion put on by the New York City Opera in anticipation of their production of Séance on a Wet Afternoon, a playwright and four composers of opera and the musical theater debated the same issue.  What was not said is clear in the letters of Verdi and Puccini.  The great opera composers often perform both roles, if not writing the libretto themselves, they have their hand in every word and certainly in the dramatic arc.  Strauss was this type of composer when he wasn’t intimidated or hamstrung by his most frequent collaborator, Hugo von Hoffsmanthal.

Surprisingly the program mentions Strauss’ presence in Germany during the Second World War.  What is seldom noted is that Strauss’ only son married a Jewess and his grandchildren were Jews.  During this period Strauss made desperate efforts to keep his Jewish family safe.  At the same time the US President of course turned away a ship full of Jewish refugees.  Two-thirds of them would die in the camps.  Casting the first stone is complicated.

We have in Capriccio Strauss’ Felix Krull – that delightful last thought of a great artist on life and art.  After years of often sober reflection on the subject, Strauss kicked up his heels and gives us an often funny and always delicious farewell bouquet.   In Madeline’s final monologue, Fleming sang with compelling beauty, never making a choice between words and music, but the vote in the performance is surely for a music driven story.