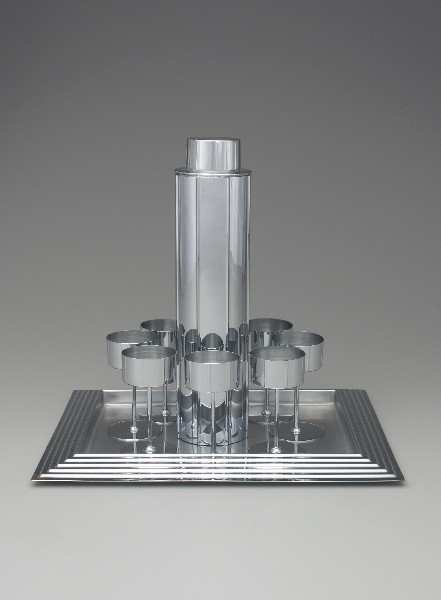 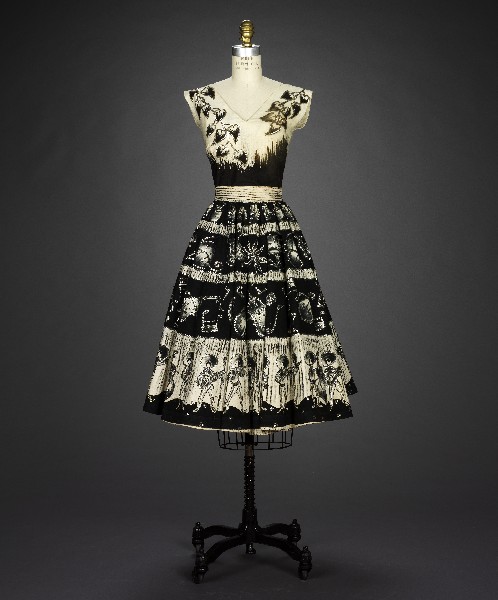 Mexican Ensemble from the 1950s 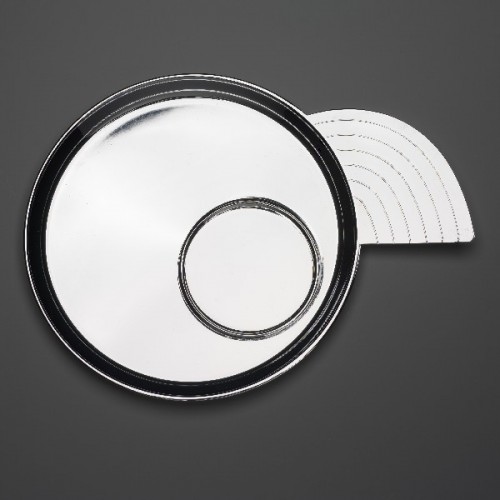 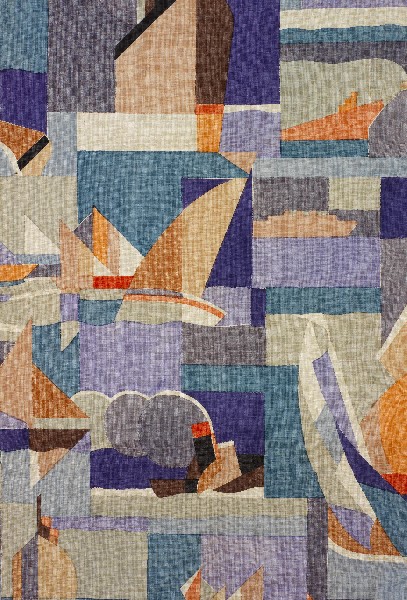 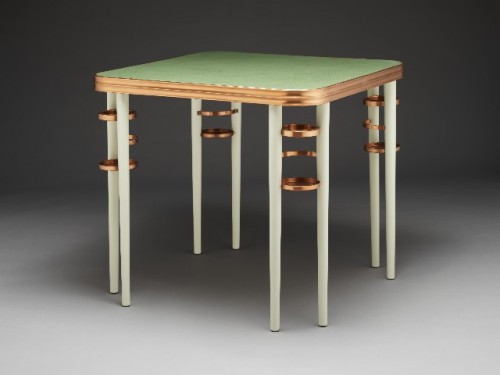 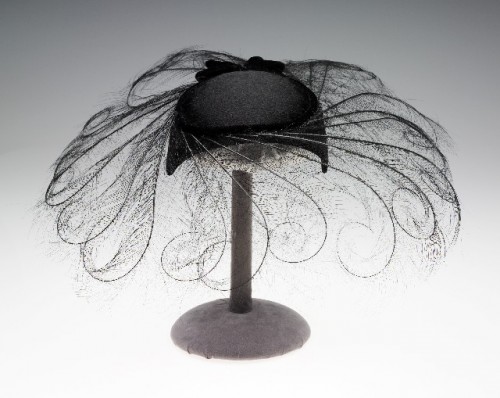 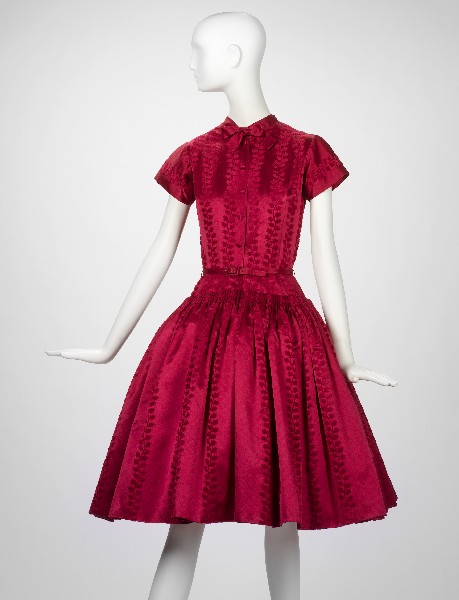 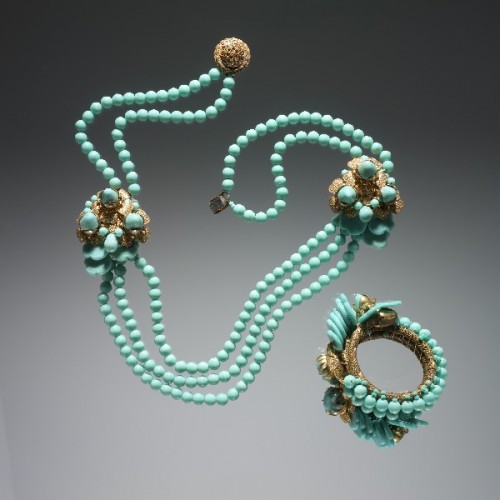 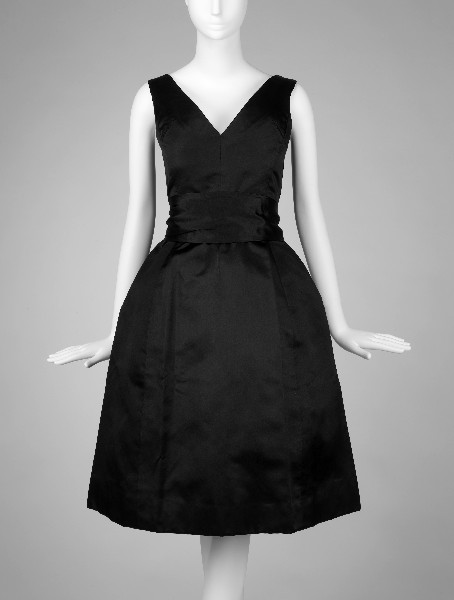 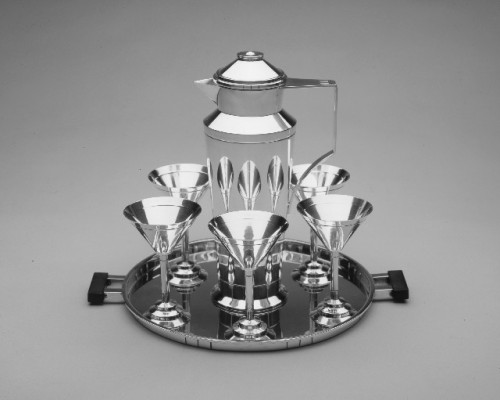 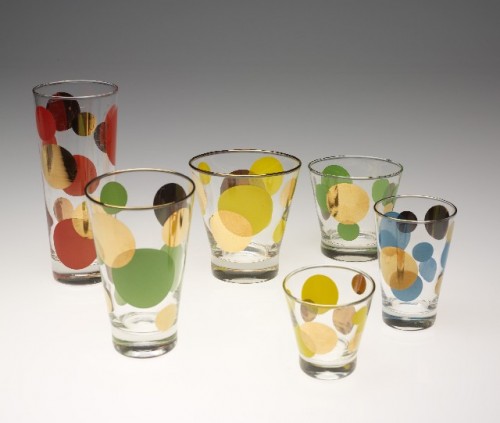 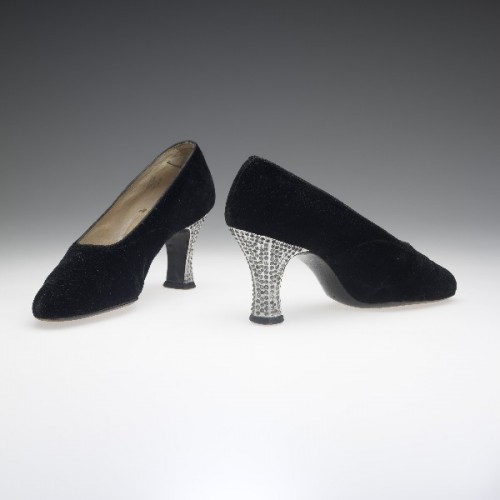 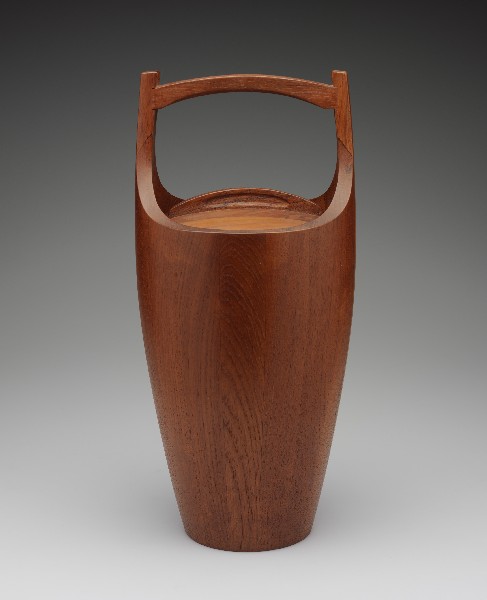 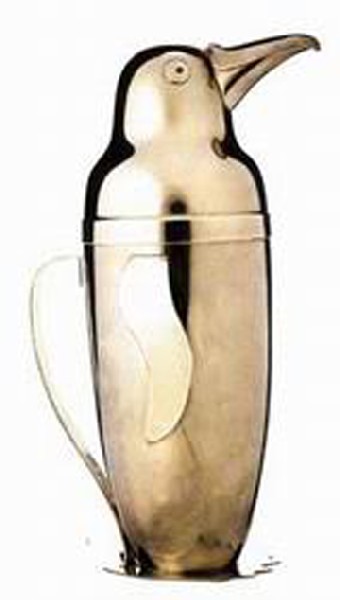 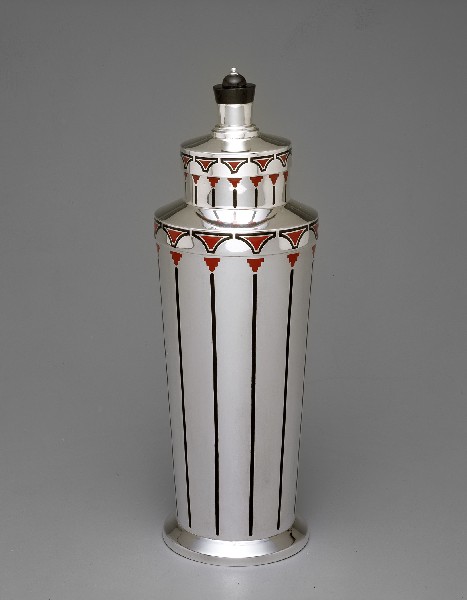 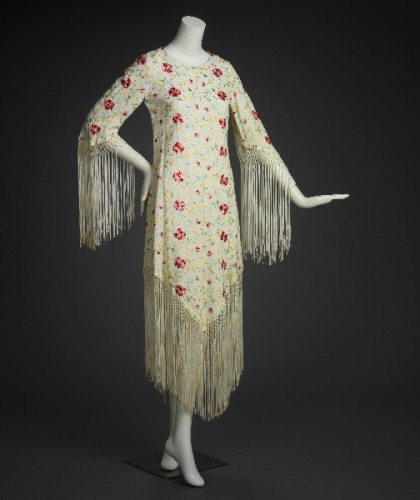 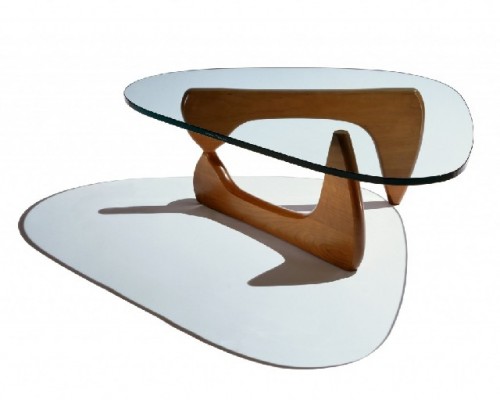 For the past several weeks, HBO has been showing a series , Mildred Pierce, a wonderful period drama set in the late 1920s and 1930s. One of the rituals presented throughout the story is the sharing of cocktails. Similarly, the award-winning Mad Men on AMC set thirty years later in the 1960s makes use of the cocktail as a ritual that became routine.

Of course, Ian Fleming's  James Bond's mantra of "stirred not shaken" was a 60s and 70s reference to a particular cocktail culture hero. In the late 1970s and early 1980s, television shows like Dallas and Dynasty used cocktails as punctuation for plotlines. Cocktails and all the social and cultural elements around their drinking and presenting were a part of American culture throughout the 20th Century.

Ambitiously conceived by the RISD Museum curatorial staff, Cocktail Culture: Ritual and Invention in American Fashion, 1920-1980 is one of the largest exhibitions of costume and textiles in the RISD Museum’s history. From Prohibition to disco, cocktails and fashion ritualized the passage of time. Sharing cocktails helped men and women to navigate the sweeping social changes that defined 20th Century American life. Cocktail Culture and the fashion that defined it organized and somehow unified a variety of people while providing a means of vibrant personal expression, ritual and eventually routine. This design exhibition opens Friday, April 15, and runs through Sunday, July 31.

“Cocktail Culture traces the influence of the cocktail hour on fashion and design in the 20th Century, from the Flapper of Prohibition to the ultra feminine dresses of post-WWII to the spangled pantsuit of the disco era, and the accompanying designs for shakers and glasses. The exhibition offers perspective on the current resurgence of interest in all things cocktail,” says Ann Woolsey, Interim RISD Museum Director.

Organized by curator Joanne Dolan Ingersoll, with Costume and Textiles Department head Kate Irvin and curatorial assistant Laurie Brewer, this exhibit integrates over 220 objects taken from a number of museum departments and other collections. These include examples of clothing, jewelry, textiles, and decorative and fine art drawn from the Museum’s own considerable holdings and loans from other museums and private collections. The stunning array of apparel represents many of the 20th Century’s major designers including Elizabeth Arden, Coco Chanel, Christian Dior, Oscar de la Renta, Hubert de Givenchy, Norman Norell, and Elsa Schiaparelli. Many of America's great industrial designers are included as well.

Displayed in a large space on the third floor of the RISD Museum's Chace Center, Cocktail Culture is a true design show that integrates and unifies objects and artifacts across aesthetic, period and departmental boundaries. With a few masterpieces like Norman Bel Geddes' spectacular Manhatten Cocktail Service, Isamu Noguchi's Occasional Table and Eugene Schoen's outstanding Card Table as well as the numerous stunning period haute couture dresses from the Museum's Textile and Fashion Department, the exhibition is an elegant visual and aesthetic statement of cultural and social history. It is a vibrantly beautiful display.

Thoughtfully with often strategically beautiful and seminal examples, cocktail fashion is presented thematically in context with photographs, illustrations, decorative arts, and even a number of novelty items such as a 1940s tiki bar from Japan.

With objects from the Roaring Twenties to the WWII and Postwar Period to the social upheaval of the 1960s and ’70s, the exhibit illustrates the ways in which the cocktail hour transformed 20th Century fashion and society by design. From the formal to casual, cocktail culture changed and evolved the ways we dressed and interacted for and with one another. Various sections of the exhibit describe how cocktails effected popular culture.

A section on Icons orients the viewer with objects considered classic to cocktail culture. These include the cocktail glass, martini shaker, and Little Black Dress. The section on Mixed Company (1920s-30s) reveals the Roaring Twenties and Prohibition when cocktails were consumed in private and illegally, at someone’s house , or discreet nightclubs (speakeasys). Another section Mixing refers to men and women “mixing” in this new social situation where they dress to be seen and for each other. Dashiell Hammett's Thin Man played by William Powell personified this period.

Urban Nightlife (1920-1930s) further describes how social drinking moved out of the house and into the nightclub or speakeasy. It also explains how Harlem and the jazz club becames major influence on fashion, music and American culture. The Jazz Age and "flapper" fostered short, unstructured dresses, such as the French evening dress by Providence designers A. and L. Tirocchi. The woman's clothing now freed her body for movement and dance. This represented a new independence for women. Fred Astaire and Ginger Rogers underscored the notion of the glamorous life with cocktails and dancing.

In order to circumvent restrictions of Prohibition, the luxury ocean liner becomes a means for communicating various attitudes, comportment, and style. Thus, the Travel (1920-1940s) section expresses the notion of luxury and mobility. Tropical and exotic locales influenced new fashion trends in leisure wear that became a mainstay of American fashion.

World War II and its aftermath brought cocktail culture along. Boys went off to war and returned men often developing the taste for a strong drink. Rosie the Riviter returned from work and learned to relax with a coctail. The section New Materials, A New Purpose (1940s into the early 1950s) focuses on wartime rationing and limited yardage in clothing. Scarsity evoked embellishments such as embroidery, metal buttons, turned back cuffs, pleating, and even pockets seem frivolous. At this time, the women’s suit emerged as women went to work outside the home. With a simple change of accessories, the neat suit worked for evening as well.

The Rules (the 1950s) reflects postwar prosperity when fashion again began to look to Paris. The cocktail culture as we have come to understand or visually interpret it today originated during this postwar period. The ubiquitous cocktail dress combines the elegance of evening wear with the informality of the day dress. The cocktail dress is the iconic look of this period, and it continues to define style in its various forms to the present day.

The Day for Night (late 1950s to early 1960s) section reflects films of the late 1950s and early 1960s. These mirrored Cold War anxiety and echoed the dark side of overconsumption. Breakfast at Tiffany’s, La Dolce Vita, and Who’s Afraid of Virginia Woolf had a tremendous influence on fashion in the 60s. During this time, dress shapes become simpler, but accessories were definitely often over the top. The Little Black Dress, now ubiquitous in cocktail culture, becomes a must-have for all women. Also, contemporary media in the form of advertising, magazines, films and television underscored the glamour and ritual of cocktail culture.

The New Casual (1960s and 1970s) section describes how cocktail culture reflected the general loosening of society’s rules. Following the explosion of suburban development across America, the cocktail party moves from the living room to the backyard patio. This informality of setting influences both barware and clothing design. Modernist aesthetic is reflected in Scandinavian designed housewares and often Teak design objects.

International Set/Club Culture (late 1960s through the 1970s) section involves the social upheaval of the late 1960s and 1970s. Here, freedom and experimentation find their expression in nightlife, as they did in the 1920s. The concurrent rise of Pop Art is reflected in the bright colors and flat patterns of cocktail wear. Newly created synthetic fabrics with psychedelic prints, like Pucci’s colorful cocktail dresses, become high style. New shapes emerge, such as the plunging neckline and the pantsuit, epitomized by the Molly Parnis gold polyester and sequin ensemble on view in the exhibition that was right at home at Studio 54.

With so much good and beautiful in the exhibition, there is unfortunately a glaring gap. There is little real object inclusion or social/historical reference to the intertwined behavior and cultural rituals of smoking with cocktail culture. Is this a politically correct reaction to the evils of smoking or just a curatorial oversignt? Smoking and drinking were heavily intertwined. Cocktail culture genearally had a smoke cloud floating above it.

Over the decades, there were also a plethora of quite distintinctive and often elegantly beautiful smoking accessories that were as finely designed as cocktail paraphenalia. Lighters, cigarette holders, cigarette boxes and ash trays were all shown design focus and interpretation over the period covered by the exhibit. Little significance of this cultural component was applied to this show. Too bad, as it would have broadened the understanding of the periods covered.

The Cocktail Culture exhibition was designed by Nader Tehrani, a RISD BArch 1986 graduate, who is an architect practicing in Boston and professor of architecture at MIT. Tehrani is the principal of NADAAA, and, with the firm Office dA, was the principal designer of the award-winning conversion of the former Providence Hospital Trust National Bank building into RISD’s Fleet Library and 500 bed dormitory. Tehrani is working on the RISD Museum’s 20th Century permanent collection installation, Subject to Change: Art and Design in the 20th Century.

Cocktail Culture is accompanied by a well illustrated catelogue/book published by the Rhode Island School of Design. Essays explore the various ways in which Hollywood, Harlem, suburbia, and Paris all helped shape the visual and social culture of the cocktail party.

This exhibit is a broad look at how designers have influenced our social mores and folkways. In its visual and aesthetic exhuberance, the objects bring to life the beauty and cultural definition of a shared cultural activity and how it literally was fashioned. Cocktail Culture should have a wide appeal to a variety of museum visitors. It is visually like a well mixed drink--smooth and tasty with a bit of zing.