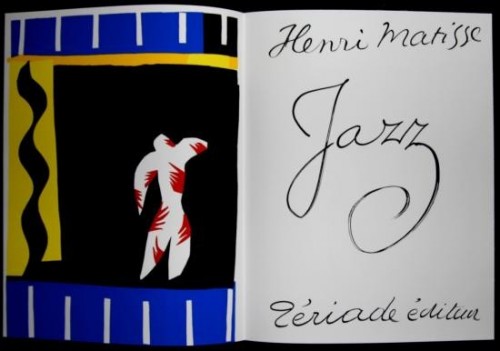 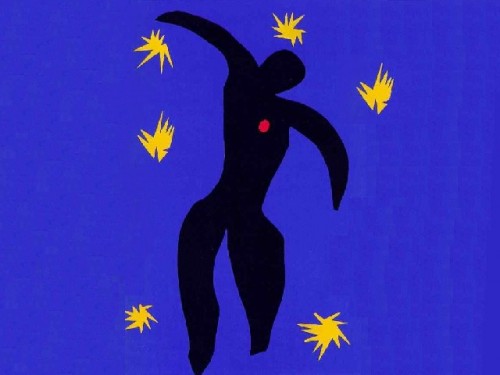 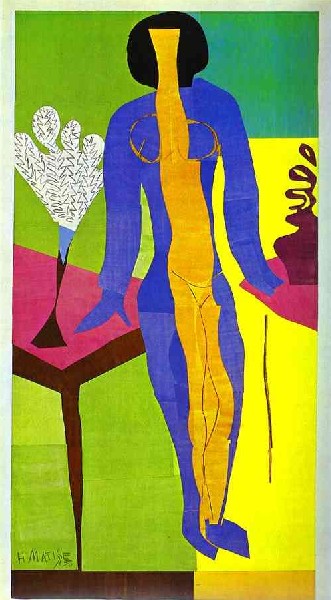 A remarkably inventive approach to the figure. 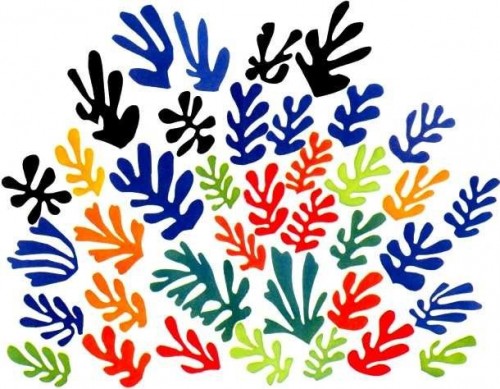 The joy of natural forms.

In the Musée Matisse, located in the northern French town Le Cateau-Cambresis, birthplace of the artist, is a wonderful exhibition on the topic of  "cut gouaches." They are part of his extensive oeuvre.During his last 20 years of life, from 1936 to 1954, Matisse and his staff painted hundreds of sheets with gouache that looked like monochrome paintings on paper with gouache looked like monochrome paintings on paper. Then he cut out the sheets to create  figures with  scissors. He pasted them back on  cardboard in loose but orderly compositions. Often he mounted the cartoons on a canvas.

He came to a stratification that has rarely been seen in the technique of modern painting. The concept is impressive because the paper compositions with the gouaches should be seen as loose clippings on a background. They bear witness to his quest for a new method of painting.

The Matisse family preserved much of the cut but unused pieces. Last year they gave 443 of them tp the Musée Matisse in Le Cateau-Cambresis and the museum of Nice, the city where the painter died on November 3, 1954.

Some of the pieces for this remarkable exhibition were mounted according to the principles of Matisse. The painter kept records of the colors and settings which are included in the exhibition. There are also photos of his studio and residential locations where the clippings are nailed on the walls. Others were individually inventoried and framed. The cut pieces average a scale of 3-80 cm. This could be an indication that Matisse, when cutting the gouaches, planned the scale of compositions which were not left to chance. These compositions show a commitment to spatial volumes indicating that this was necessary for a break with classical painting.

Matisse wanted to get rid of the painting that preceded, but ultimately, pure painting remained despite modernist trends. With his new experimental technique he broke from this tradition!

One may speak here of a purely conceptual phase of his career, even though most  of the cut paper works comprised of figurative elements of nature; birds, fish, plants, flowers . The cut gouache technique he practiced, in the light of contemporary art, provided a new meaning. So it is also good to look back on his work.

This exhibition represents for us not associating with any prior insights which Matisse established with his famous oil paintings on canvas. However, it is inconceivable that the artist, while painting his oils, was not concerned with thoughts of ever changing spatial meaning in his work. This may have influenced his painting. In the well-documented catalog for the exhibition (30 euros) several authors write about the origin of the decoupages. But  further research is necessary regarding the significance of this phase of the artist’s work in the history of modern art.

The exhibition includes a number of Matisse’s designs for art books and magazines (Verve and Jazz).  Here one sees clearly how the artist developed his concept. The designs are made with the techniques we have discussed. The process is clearly visible in the printed editions.

The urge of Matisse with his cut gouaches techniques to break with his approach to painting was certainly was not a game. I imagine that not everyone, including collectors, was happy. The collages feel totally different from oil on canvas where all elements as a whole are regarded as the canvas, often wrongly, which plays a part in the judgment formed when viewing a painting.

The cut-out gouaches exhibit in their compositions separate elements. They can be seen as pieces of a whole but each individual element has a specific place in the work. They are loose from each other because they  are mounted. It is remarkable that Matisse prepared the gouache sheets first and then “painted” the figures and designs  with scissors. That he wished to detach himself from painting as a privileged technique is more than obvious.

The question is what Matisse wanted to prove? The exhibition includes film and photos whereby you can see the wall of his studio with the attached, colored gouache, painted sheets. Each has its own pigment. His love for bright colors remained from his stay in Tahiti where the blue sky casts a different light on the vegetarian. On the floor beside him are cut elements.

Perhaps he wanted in this way to demonstrate that painting was for him the result  of an idea. The viewer must here look further than at a canvas. Was art was for him more than a palette with all parts of his canvas equivalent to fill? Or did he aspire with these puzzling elements to an abstract shape or planning obtained as previously described? Patrice Deparpe in the catalog describes a "great freedom" (une immense liberté) that the master painter made. It must indeed have given a liberating feeling in the last years of his career. He was breaking new ground at an age when many artists rest on their laurels.

Matisse himself saw no difference between  paintings and his decoupages. But, for the viewer, there is a dramatic difference. The works were created with a vision of development that defy the fundamentals of painting and ask us to experience them with a context that is broader than just observation. The paint (gouache) is present but cut and hung against a background that seems to be absent in the work. The result is indeed that spatial feeling between the individual pieces and their floating elements. In “Oceania, La Mer “(1945), the work (166 x 380 cm) is filled with gouache cutouts representing marine animals and minerals.  “Oceania, Le Ciel” (1946 figure) shows the animal that hovers above the sea.

After seeing the 'decoupages' the activities of the painter are better and clearer to estimate.  The seven rooms of the museum show us an artist who goes beyond the limits. The donation from the family to the Matisse museum is a godsend!

The exhibition continues until 9 June.

Translated by the critic Roger D’Hondt from Dutch to French then English with an edit by Charles Giuliano.