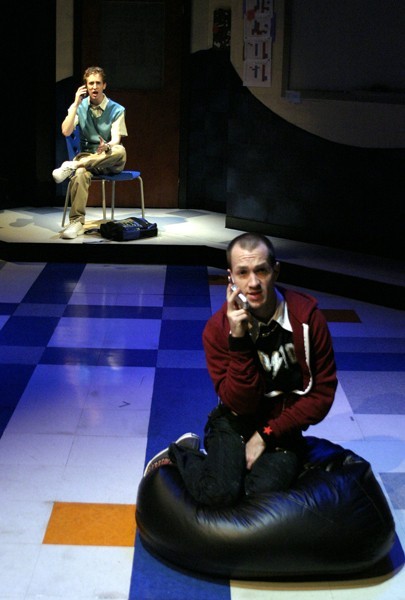 Howie, foreground, and Solomon talk on their cell phones. 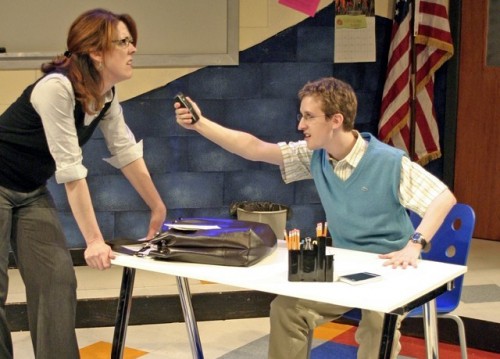 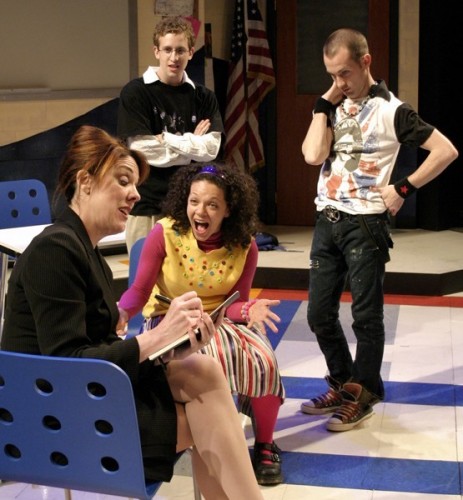 The kids are interviewed by a reporter. 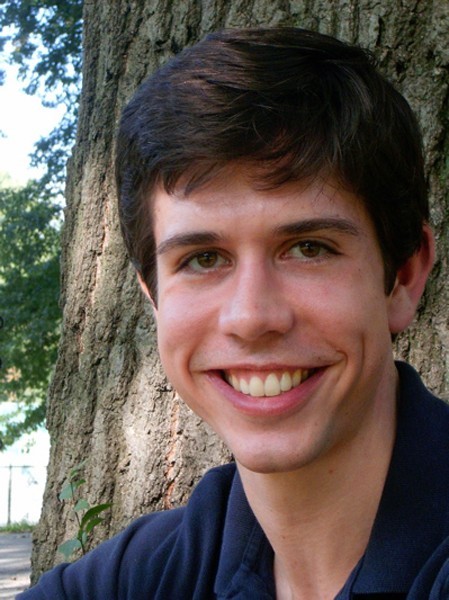 The playwrite, Stephen Karam, is creating for and about his generation.

For a fresh, fun, and insightful take on just what's wrong with kids nowadays we urge you to check out the hilarious play "Speech & Debate" which will end its smash premiere at Boston's Lyric Stage all too soon on April 25.

While Larry Murray of Arts America has previously reviewed "Speech & Debate" for Berkshire Fine Arts, we beg to differ. During a recent week in Boston the play was a pure joy and highlight of our visit. With its over the top teen exuberance we were just falling off our seats. It seems Larry was less amused. Oh well. That's what makes horse races and here at BFA keeps life interesting as, from time to time, we differ and debate.

During the long Berkshire winter one gets starved for fresh theatre so periodic trips to Boston and New York provide a fix to calm the jitters waiting for the arrival of the season. Of course, once that happens, it's a flat out monsoon of performances that keeps us out and about five nights a week until Labor Day.

You can get hooked on theatre as we find during intermissions catching up with Berkshire peers like Gail Burns of Gail Sez and Peter Bergman for the Advocate and Berkshire Bright Focus.. They are far more intense and fanatical than we are. Often Peter takes in a matinee then races cross county to an evening performance. Too bad they don't award frequent flyer miles to critics. By now we would be booking free flights to Hawaii.

Before the show at Lyric Stage we caught up with an old friend and colleague, Boston's dean of theatre critics, Larry Stark, publisher of the comprehensive Theater Mirror. We mentioned  to Stark that he inherited the title with the passing of Eliot Norton of the Herald some years back. It evoked a typical burst of laughter. Larry and I were colleagues in the late 1960s at Boston After Dark which later evolved into the Boston Phoenix. Then, as now, he is remarkably dedicated to covering alternative theatre.

I asked why we didn't see him during opening night at A.R.T. earlier in the week. The response was insightful. He stated that he opts to see shows with long runs after their openings so that he can cover shows that often have just a few performances. He talked with passion of some of the outstanding work being done and suggested several shows we might see. Even though he is now a senior citizen, and gets around with a cane, he was proud to state that he sees more than 20 shows a month. Despite the quality of work being presented he commented that even small theatres are generally half full.

But, as Murray has previously reported for BFA, there appears to be a paradigm shift as companies like Lyric Stage and Zeitgeist, to mention just two, are producing the quality of adventurous theatre that challenges the hegemony of American Repertory Theatre and Huntington Theatre Company.

The Lyric production of "Speech & Deliver" is an outstanding example of the future of contemporary theatre. Primarily, it is notable for providing a vehicle for extraordinary emerging talent presenting provocative ideas in a manner that is unique to their generation. Sure, as Murray pointed out, there is a learning curve for adults in the audience. There are rapid shifts of focus, texting, shards of ideas and conversation that is the result of either the breakdown of communication skills or informed by an explosion of new media and technologies. It often seems that an entire generation suffers Attention Deficit Disorder. They don't engage in the dialogue implied by "Speech & Deliver" so much as down load sound bites and fragments of emotion and information. You have to speed dial to keep up with the plot line.

Which is to say that this is not your father's theatre. Time to chuck out Aristotle's "Poetics and Theory of the Fine Arts" and embrace the post apocalyptic aesthetic. If y'all know what I mean. Like, I luv U and ttyl. Kindah.

Since this drama focuses on the secret life of teenagers there's, natch, a lot about sex. It contrasts who is in or out of the closet, getting it on with teachers in the men's room, or setting up trysts with politicians. Solomon (Alex Syse) is closeted but tracking down a story for the school newspapers about the Mayor trolling for dates on the internet. Solomon, who attends a Christian summer camp for gays struggling to manage their urges, is a mess of conflict. Howie (Chris Conner) is out. Way out. Outer than out. Hilariously so. Flopping on the floor, swooping and twirling about, Conner is a  brilliant physical comedian. There seem to be no bones in his body as he slithers about. His every twist and turn to make a dramatic point sent shock waves of laughter through the audience. The drama was bookended by Maureen Keller, in the first scene as a teacher who is sandbagged and blackmailed by the reporter, Solomon, and, in the end, by a self absorbed radio commentator intent on promoting her latest book. Her appearances were brief but precise.

This play rocked with an over the top performance by the remarkable Rachel Hunt as Diwata. She wants so much to be cast in a school production. Because of constant rejection she wants the kids to rough up the drama teacher. As demonstrated by this production Hunt is a safe bet to emerge as a rising super star through sheer energy, charisma, and willpower  Her drive and passion makes this play compelling. The ensemble dance number where she takes it all off to reveal a hunky chunky figure in a flesh colored body stocking is just outrageous. Howie is totally over the top in the dance number and even Solomon manages to shake his booty.  Oh my goodness.

These kids just played their little hearts out. This represents new theatre at its best and offers hope for the future. Not that I understand them. Kids, you know, kids. Oh well.