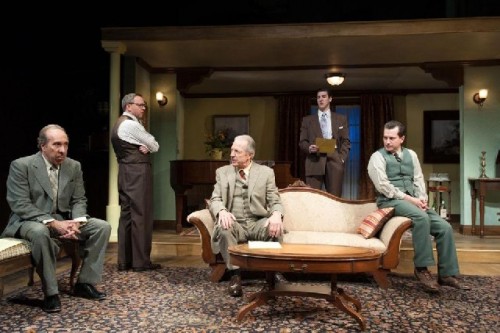 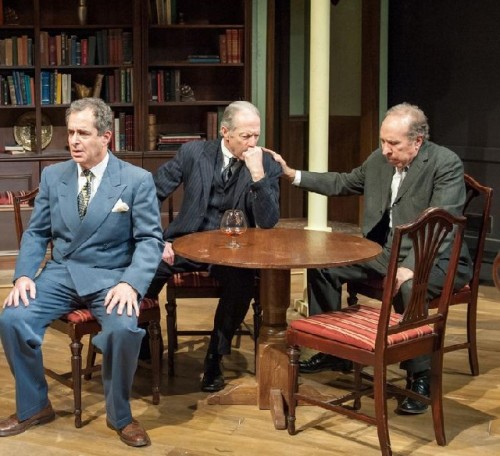 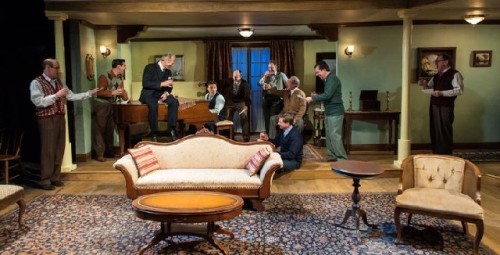 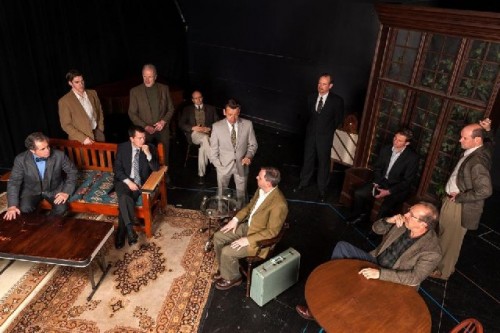 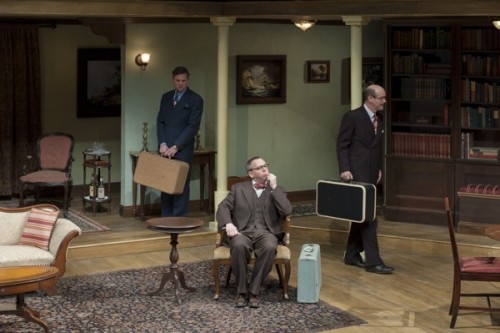 Three scientists preparing to leave at end of Operation Epsilon. 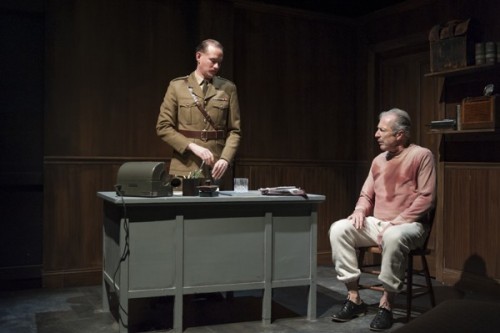 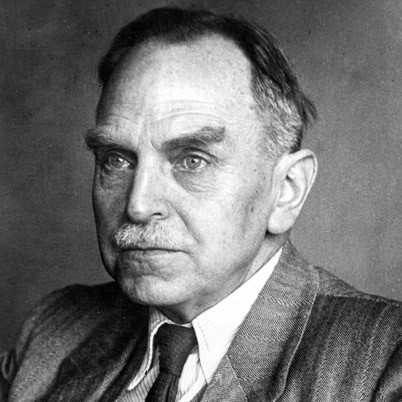 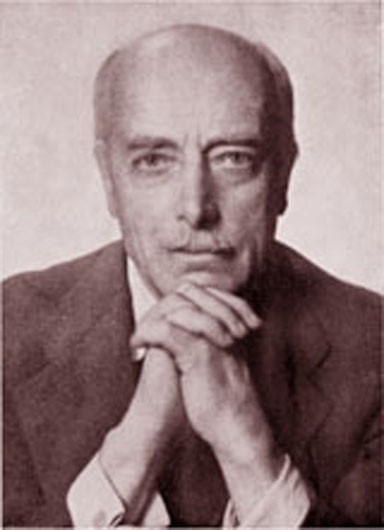 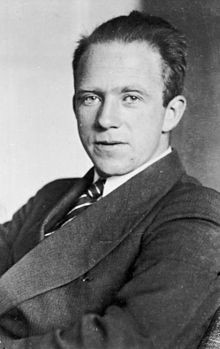 The first thing that we learn is the difference between what is right and what is wrong. As some individuals get older, circumstances somehow give nuance to their notions of right and wrong. They can discount, color and even justify bad behavior. And this is the premise of Operation Epsilon by Alan Brody, a brilliant provocatively engrossing moral drama now playing at the Central Square Theatre.

This extremely well written play is performed by a talented eleven man ensemble set in an inspired scenic environment. Set right after the end of WWII in Europe, the story is about the Allies sequestering nine members of "Hitler's Uranium Club" plus one other distinguished German physicist in an isolated but luxurious English estate. The effort was to learn what they knew about nuclear fission.

Based on a true story and recorded secret transcripts, the playwright has dramatized the six months of rather luxurious internment. Here the various scientists are shown wrestling in different ways with their choices and decisions as German scientists and as human beings who worked in Germany during the Nazi regime.

The narrative is centered around Nobel Prize-winning Werner Heisenberg (Diego Arciniegas). He served as head of the German nuclear fission project. Though in this instance he is outspokenly anti-Nazi and willing to cooperate with the Allies, history questions whether Heisenberg, hoping to save lives, deliberately held back the solution to his nuclear fission for bombs in Germany or that he made strategic miscalculations.

My late father used to joke that after WWII (he served as a sargeant in the US Army), everyone in Germany was actually part of the underground during the war. This was bitter irony. The Nazis were one of the most vile regimes of all time. Those who served them complacently were not innocent of crimes. How individuals dealt with their guilt varied greatly.

Operation Epsilon is a dramatic statement about the morality of scientists who consider what they did of greater meaning than who they did it for or for what its true purpose was. This story is a metaphor for personal and communal morality.

Owen Doyle as Kurt Diebner is antagonistic, accusing Heisenberg of deliberately holding back their entire project. Physicist Walther Gerlach, (Robert D. Murphy) prefers venturing outside and gardening rather than debating hows, whys and whatfors. Heisenberg eases tension by playing Beethoven on the piano.

These German scientists were not all working together on the same project areas but sometimes in competition. Some like Heisenberg were more theoretical while others were looking for practical methods of creating nuclear fission. Arrogantly, they prided themselves on the greatness of their German science, considering it the best in the world with the world’s most outstanding scientists.

As a whole, they agreed that Americans and British were incapable of accomplishing anything close to their capabilities. Somehow this notion was maintained even in the face of their expulsion. In some cases that meant condemning to death prominent and sometimes brilliant Jewish German scientists.

Denying their intention to create the ability to devise a destructive bomb, Heisenberg stated that they were using uranium to create nuclear fission to produce a machine capable of only creating energy. Others at the farm, with stronger Nazi Party ties, disagreed. They felt that resources needed to create nuclear weapons were given instead to Werner Von Braun's Nazi rocket program.

To many of the German scientists' consternation, Major Rittner offered no outside information. On August 6, 1945, Rittner suddenly issues a shocking statement. The Americans dropped a nuclear bomb on the City of Hiroshima, Japan. The German scientists are crushed. Their egos are severely bruised. Various characters express professional, moral and personal regret, while others blame Heisenberg for not working with them or failing to calculate things properly.

In discussions, Ken Baltin as Max Von Laue and Will Lyman as Otto Hahn, the two oldest and most respected members of the group, both dignified Nobel Prize winners, express pains of conscience after learning that the American bomb killed 300,000. Von Laue was known as one of the fathers of Quantum Physics while Hahn was the first to separate a nuclear particle.

The third most respected leader of the group, most controversial and also a Nobel Lauriat, Heisenberg, is less morally resolved. He seems more interested in his own professional reputation as well as his place in history. For this reason, he wanted to make matters clear to the world. So he drafts a group memorandum about what actually took place in German science under the Nazis from their rather distorted perspective. Not particularly likable, Heisenberg is played with passionate ambiguity by Diego Arciniegas. He is quite skillful in his performance.

Also outstanding are Ken Baltin as the somewhat avuncular Max Von Laue and Will Lyman as an elegant Otto Hahn. Baltin's Von Laue, the oldest scientist, seems the most fully human of all the characters demonstrating personal regret and a battered conscience. With consummate acting skill, Lyman's Otto Hahn is a performance of great depth and empathy.

All of the members of the ensemble cast were believable and fine in their roles. They are an impressive group of talented actors.

Stage direction by Andy Sandberg is impeccable. Conversations and narrative are easy to follow and focus on. Each ensemble member is a specific character by not only the playwright's words but by the spacing and movement of each actor.

Operation Epsilon's stagecraft is wonderfully textured. Set designer Janie E. Howland’s recreation of the two-story, multi-room interior of Farm Hall is inspired. Apparently she studied interiors of similar mansions of that era to create this handsome traditional environment. The actors movements to and from rooms or levels is visually illuminated by John R. Malinowski’s sensitive lighting treatments.

Costume designer Charles Schoonmaker historically captures the post-War tonsorial style. Appropriately, the scientists all wear period '30s and '40s three-piece suits for dinners and wear only vests or sweaters for casual get togethers.

Playwright Alan Brody has created a seemingly classic dramatic story that asks many more questions than it answers. This is drama as history, a theatre of personal and public morality. Operation Episilon is an intellectually and emotionally compelling play. This is a brilliantly written and performed provocative moral tale for the ages.