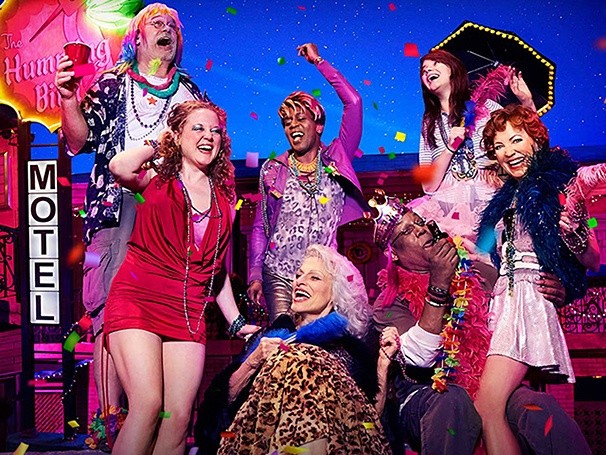 This is a review of the Chicago production that was staged at Steppenwolf Theatre.

“Tourists don’t want a coyote ugly … strip joint, they don’t want a parade INSIDE the Convention Center sponsored by Coke. They want some dirty shit to happen, authentic top shelf shit. Tucked away under the counter, ya gotta ask for it – sit it in the back room with the owner and a one-eyed banjo player named Biff…”

So says Francis (Gordon Joseph Weiss), the bike-riding vagabond poet, among the populace of the real New Orleans. This real NOLA is that strip of nondescript motels and scruffy retail you barely notice on the way in from Louis Armstrong New Orleans International Airport to one of those fancy hotels in the French Quarter.

Lisa D’Amour’s grittily poetic “Airline Highway” is set at the Hummingbird Motel, a place the tourists don’t visit. Its denizens are the hookers, the strippers, the musicians, the taxi drivers, the janitors, the almost penniless and almost homeless. They’re the people who know when Jazz Fest (the New Orleans Jazz & Heritage Festival) is coming, but never attend as paying guests.

The production is vibrantly conceived and directed by Joe Mantello. His large cast is highlighted by K. Todd Freeman as Sissy Na Na, a magnetic, fast-talking, self-professed tranny; Kate Buddeke as Tanya, who has drug problems and receives paying guests; and Caroline Neff as Krista, a recently homeless stripper bravely trying to keep her life together. Scott Jaeck is Wayne, the laidback Hummingbird manager and Tanya’s protector.

Since New Orleans is known for its funeral celebrations, we’re not surprised to learn that the gang is planning a ”living funeral”—for Miss Ruby, because she doesn’t want to miss her own funeral. Sissy, sexy in tight jeans and t-shirt, spike-heeled sandals and plenty of jewelry, keeps track of and takes care of Miss Ruby, darting in and out of her room. Tanya plans food and assigns people to party prep duties, including decorating the Hummingbird exterior.

Bringing an element of emotional conflict is a young man they call Bait Boy (“please call me Greg,” played by Stephen Louis Grush) who moved to Atlanta, and returns for the party. He’s accompanied by his older wife’s teenage daughter Zoe (Carolyn Braver), who wants to interview people for a school project on “subcultures.” They both succumb to the Hummingbird milieu and change in the process.

At the beginning of act two, the party has begun. A large crowd (including many new party guests) are drinking and dancing. Finally, later in the act, we meet Miss Ruby (Judith Roberts), a former burlesque queen, who is wheeled down the stairs to the party on her hospital bed. Miss Ruby sits up and delivers a lively monologue on sex and celebration and how she values the people around her, who she mentored and nurtured over the years. “Don’t you go telling me,” she says, “about how some people get to have more fuck ups than others, because of their money or the fancy last names they were born with. We got no time for that.” She implores them, “Don’t run from your ragged self. Be with it. Be with each other. Be with this moment….”

The exterior set of the shabby Hummingbird creates a strong sense of place; it’s vividly designed by Scott Pask and gets even more brilliantly decorated as party time approaches. David Zinn’s costume designs help establish the nature and personality of each character. Zaphy Weidemann’s lighting design modulates and enhances the setting. Fitz Patton’s sound design and original music are appropriate rhythms for a NOLA play.

On April 23 the Broadway production opens at Manhattan Theatre Club at the Samuel J. Friedman Theatre on 47th Street. The New York audience can look forward to a joyous, celebratory but occasionally troubled evening, reminding them of how many sides there are to the fractious, passionate life of New Orleans.