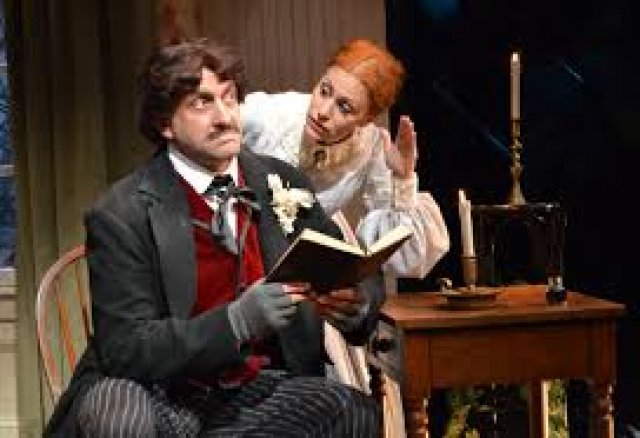 (Photo by Frank "Fraver" Verlizzo) Emily Dickinson (Margery Lowe) tries to get as close as possible to Edgar Allan Poe (Gregg Weiner) as he reads poetry. 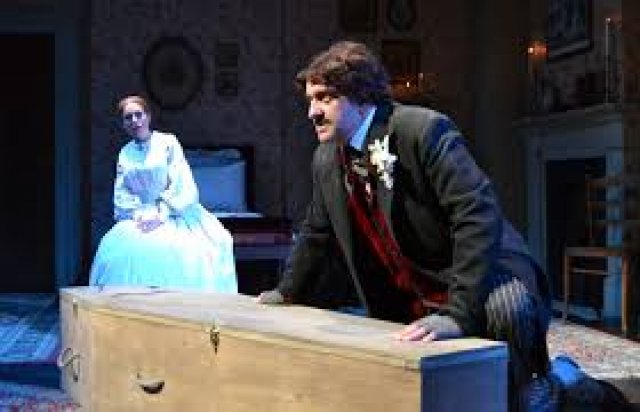 (Photo by Frank "Fraver" Verlizzo Edgar Allan Poe (Gregg Weiner) is relieved to have finally found a hiding place in the world premiere production of Edgar & Emily. The poetess, played by Margery Lowe, tries to take a closer look at Poe and his casket. 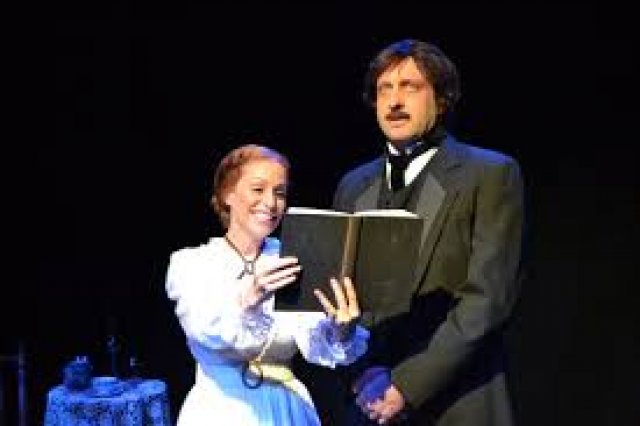 You need only look on Palm Beach Dramaworks’ stage to receive the answer.

There, along with Dickinson, stands Edgar Allan Poe. He looks very much alive.

Poe is clad in black, while the poetess sports white.

The events transpiring on the PBD stage sound and look like a tale the famous horror writer himself may have written, complete with sound designer David Thomas’ foreboding, creepy effects and Paul Black’s eerie, dark but varied lighting.

Note to Poe’s fans, as well as to Dickinson aficionados: These are not the famous writers with whom you’re familiar.

Rather, they’re Poe and Dickinson as playwright Joseph McDonough imagines them in his funny, fiendish Fantasia, Edgar & Emily. It’s receiving its world premiere in a finely-tuned production. It runs through April 22.

The strangeness whizzes by at one hour and ten minutes. This piece features rapid-fire, smart-alackey dialogue, oftentimes carrying a sense of urgency. By curtain call time, you don’t want it to end.

McDonough doesn’t pretend to have written an historical accurate piece of theater. The playwright has taken considerable dramatic license with these two characters. They never met. In fact, as McDonough wrote in the production’s program, “Poe died before Dickinson wrote most of her poetry.”

The playwright puts his imagination to use. The result is a very different Poe and Dickinson.

As the play begins, everything is right where it should be in Dickinson’s home. In fact, everything seems so ordinary that Dickinson seems restless. Perhaps she’s ready for a little action – but she has no idea about the “excitement” that’s about to invade her private little world.

Scenic designer Michael Amico has rendered Dickinson’s room in a compact, cozy manner befitting the period, with flower-decorated walls, patterned rugs and candlesticks. It all looks quite comfortable – a warm and inviting shelter from the unforgiving January cold and snow outside. Only one window provides visual evidence that there’s a world beyond these walls. This reinforces Dickinson’s preferences for a private, quiet life of solitude.

Poe shatters that sense of quiet by barging into Dickinson’s room, dragging his coffin behind him. The man’s obviously unnerved. Someone has been stalking him and he needs shelter.

“I hope I’m not inconveniencing you,” he says. The reason Poe is dragging his casket is revealed in an explanation suggesting perhaps Stephen King and playwright Martin McDonagh might have collaborated on it. Perhaps Poe’s explanation might even remind you of A Christmas Carol’s Marley in a roundabout sort of way.

While Poe hides in Emily’s house from his “doppleganger,” the two ruminate on topics such as life, death, illusion, imagination, art and legacy.

Edgar & Emily is a technically a two-character play, but death is also a character.

The discussion that Dickinson and Poe have about life and our mortality might put our minds to work.

But it doesn’t include anything we haven’t already heard in other plays, movies, TV shows and other art media.

On the plus side, McDonough reveals possible sides of Dickinson and Poe that might cause us to read their works from a different perspective.

One thing’s for sure: You don’t have to be a Poe or Dickinson scholar to enjoy or take away something useful from Edgar & Emily. Even if you haven’t read a single work of theirs, you’re likely to find this intriguing work gripping, thrilling, chilling theater to think about.

McDonough switches tones frequently. That’s OK; this work is a fantasia. It’s “a work (such as a poem or play) in which the author’s fancy roves unrestricted,” according to the Merriam-Webster Dictionary.

And so, tense, urgent back-and-forth exchanges segue with into a teasing, even insulting type of dialogue. The latter carries a tone not unlike the competitiveness Annie Oakley and Frank Butler put on display in Annie Get Your Gun or Eliza Dolittle and Henry Higgins convey in My Fair Lady.

Emily: I do not believe you are Edgar Allan Poe.

Edgar: Believe what you will. It’s no concern of mine.

Edgar: I am not a third-rate poet!

That’s up for debate. What’s clear in this play is that Poe serves as a brutally-honest reality check on Dickinson’s illusions of safety. She’s the insular one compared to Poe’s well-traveled, less naïve persona.

The actors are mostly strong, directed with varying pace by William Hayes.

Gregg Weiner is convincingly intense, jaded and serious as Poe. It’s clear this man, as a literary critic, has seen too many poems lacking in quality. There’s a kind of eye-rolling “here we go again” expression emanating from Weiner, even if he doesn’t express it explicitly. Weiner also endows Poe with an urgency we’d expect from someone trying to escape someone who wishes to kill him.

What’s missing from Weiner’s performance is an authentic sense of vulnerability when Poe describes his fears to Dickinson. Weiner betrays the same expression too often.

In a more well-rounded performance, Margery Lowe plays the poetess with palpable disgust, as well as a clear sense of devotion to and love of her poetry.

Lowe’s Dickinson reacts to Poe’s insults with a tone of voice, combining amusement, playfulness and sarcasm. We, however, expect more shock and panic from Dickinson when a total stranger barges into her quiet, secluded space, lugging, of all things, a coffin.

In this play, Edgar comes to Emily for help. But Lowe makes it clear that, as the play progresses, she needs him almost, if not as much.

Oftentimes, a therapist-client relationship is necessary when thoughts of death, with all its unpredictability and finality, arise.

This is, indeed, true – even if you’re Edgar Allan Poe.

Edgar & Emily continues through April 22 at Palm Beach Dramaworks, 201 Clematis St. in West Palm Beach. Evening performances are 7:30 p.m. Wednesday and Thursday as well as 7 p.m. Sunday. Matinees run starting at 2 p.m. on Wednesday, Saturday and Sunday. Individual tickets are $75, with student tickets available for $15. Pay your age tickets are available for those age 18-40. Tickets for educators are half price with proper ID (other restrictions apply). Group rates for 20 or more and discounted season subscriptions are also available. For ticket information, call (561) 514-4042 or visit www.palmbeachdramaworks.org.