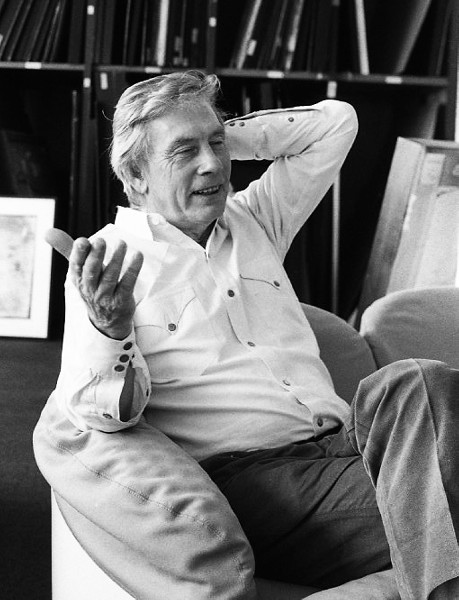 Lester was laid back and a man of few words. 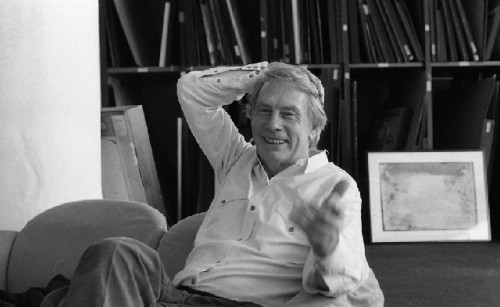 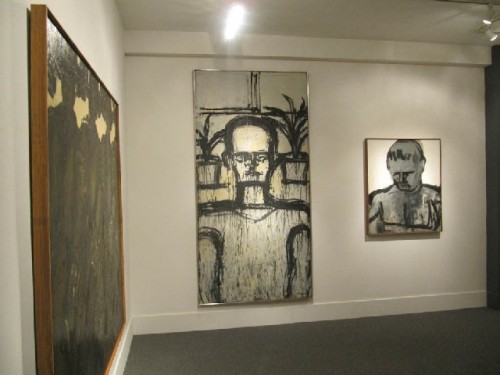 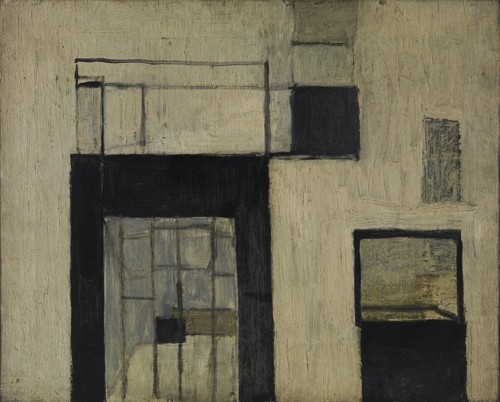 Bowery Door, 1951, from his first one man show at New Yorkâ€™s Artistâ€™s Space. Images courtesy of Acme Gallery and the estate of the artist. 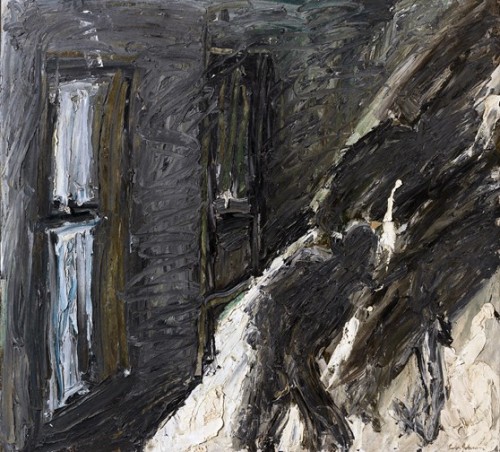 A transitional work City Street Scene (with snow) 1958 as he evolved to using thick juicy paint. 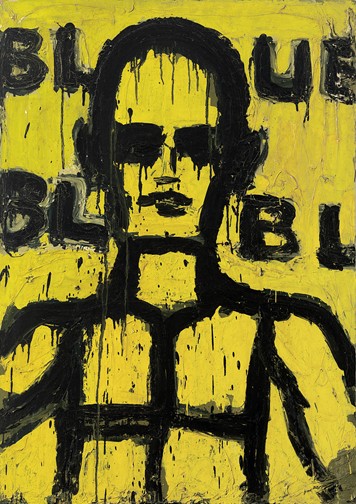 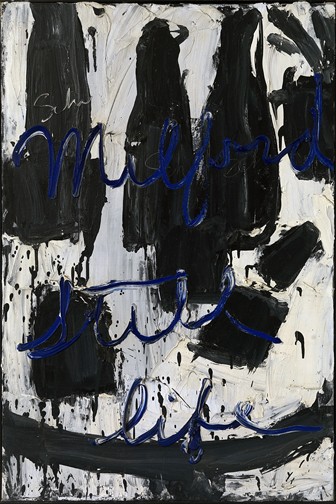 Text is also an element in a series of still life paintings from 1965. 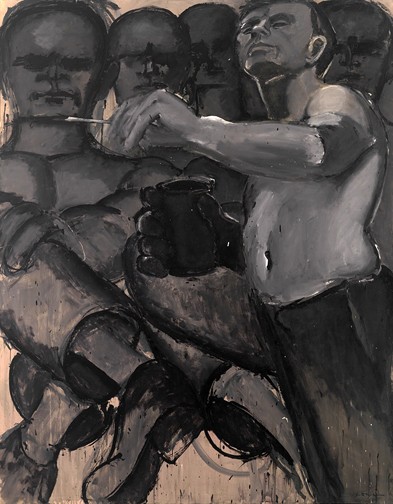 The features of the artist are recognizable in this painting from a 1969 series of Self Portraits. 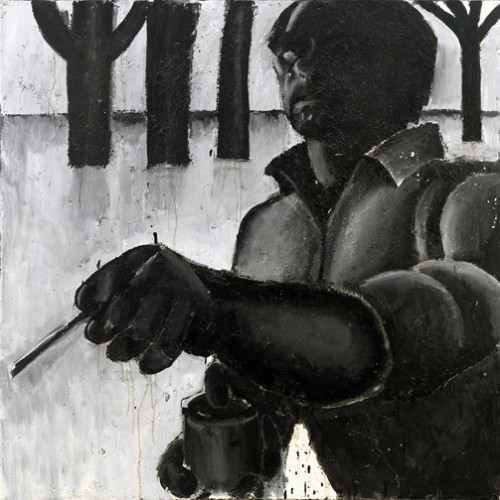 The features have been bludgeoned into an existential blob in this self portrait. 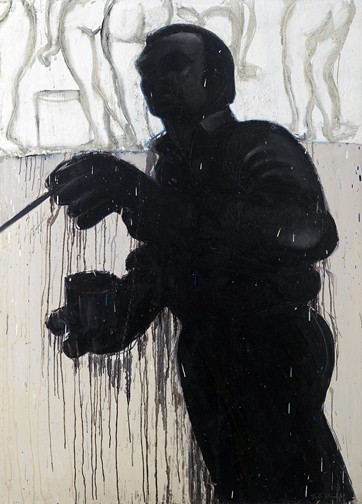 Here Lester poses himself before a frieze of female nudes. 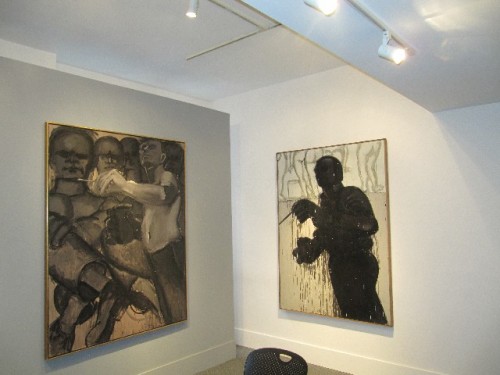 An installation of self portraits. 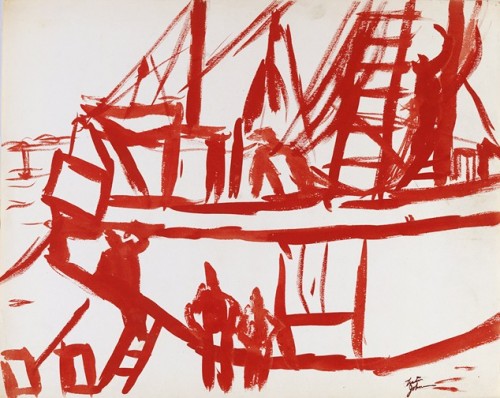 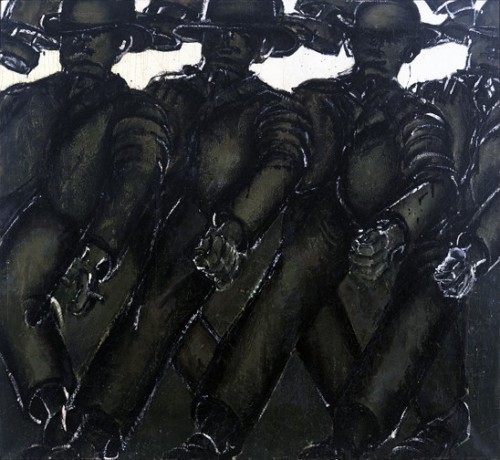 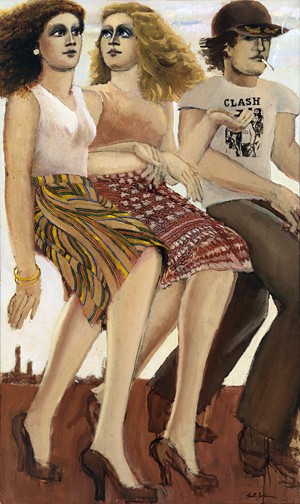 Colorful late paintings from the 1980s remained in the back room. 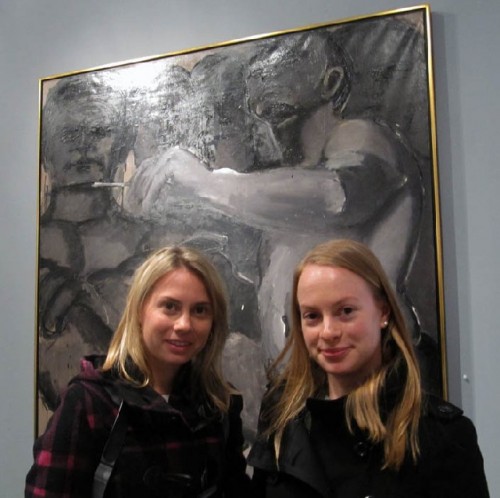 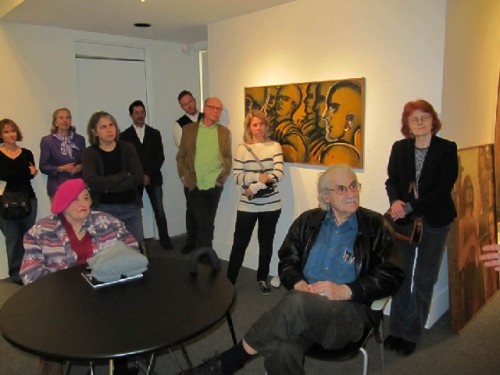 A gathering at Acme to discuss Lester’s work. 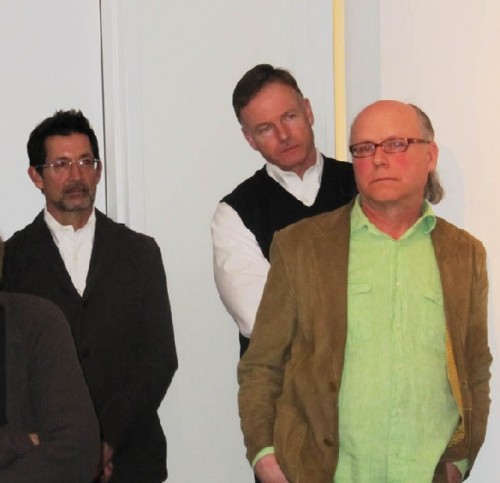 Martin Mugar, right, studied with Lester at Yale with Jim and David standing behind him. 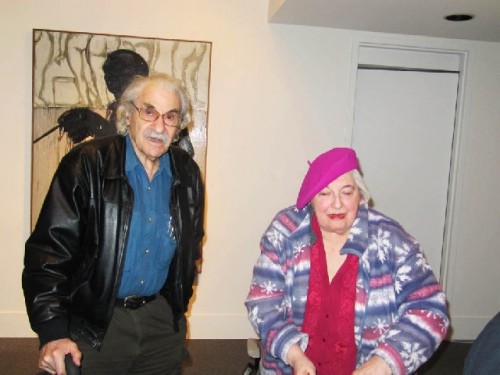 The artist Arnold Trachtman with his wife Joan. 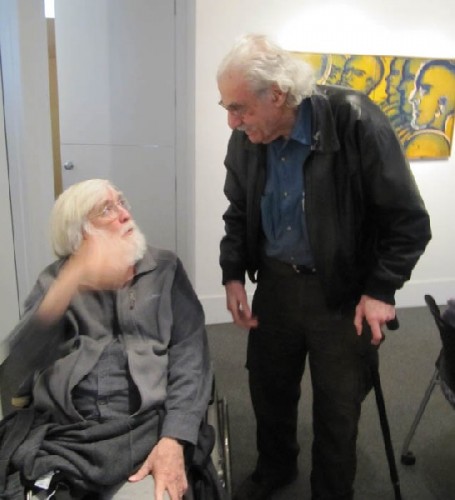 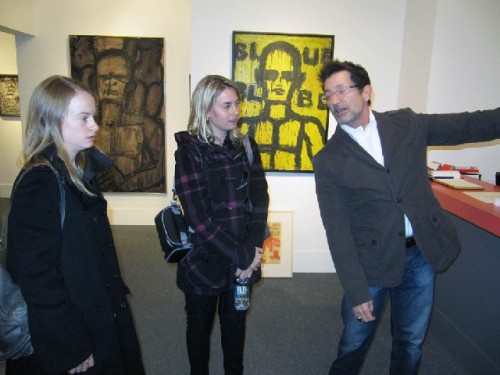 Gallerist James Bennette discusses the work with Julia and Stephanie. 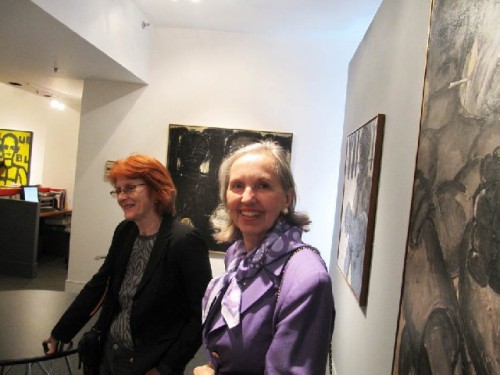 The leading figurative expressionist artist, Lester Johnson (January 27, 1919 to May 30, 2010) passed away last year at the age of 91. The exhibition at Acme Gallery, through April 30, has the appropriate title “Lester Johnson in Memoriam.”

The original intention of gallerists David Cowan and James Bennette was to create a concise retrospective. But they opted to install an exhibition that highlighted several remarkable self portraits and not to display some of the more colorful works from the 1980s, or a selection of Provincetown inspired watercolors from the 1950s.

These and other works borrowed from the estate of the artist are available for viewing in the back room. As well as a rare, neo plastic, abstraction/ landscape “Bowery Door” with a gallery stamp, "The Artist's Gallery" on the back that suggests it may have been included in the artist’s first one man show in New York (1951).

The decision to focus thematically on a particular time frame and aspect of the artist's work resulted in a strong and compelling project. Rather than cover the full range of his oeuvre Acme concentrated on a very strong and paradigmatic phase when the artist was at the peak of his expressive powers.

The compelling series, book ended with other works of the period (The late 1960s), evoked surprise and awe. Although I have seen much of Johnson’s work, and spent considerable time with him in the 1980s, many, if not all of the paintings in the exhibition were unfamiliar to me.

We were brought together by Karl Hecker of the David Anderson Gallery. It was essentially the estate of Martha Jackson housed in a New York warehouse. I was asked to write an essay for Lester’s traveling exhibition (1987) organized by Paul Chew for the Westmoreland Museum of Art in Greensburg, Pennsylvania. Working from slides we talked in the gallery on several occasions and I also visited with Lester in his Connecticut studio.

In addition to becoming familiar with Johnson and his practice it seemed important to locate the work within the important and poorly researched movement of figurative expressionism. We discussed at length the two other major artists of the movement Bob Thompson (1937-1966) and Jan Muller (1922-1958). Both of these artists, whom Lester deeply respected, died young. There were other artists of the movement but it seemed that Johnson, Thompson and Muller were the most unique and compelling.

There was another important phenomenon that I discussed with the artist. Just what were the circumstances by which Figurative Expressionism enjoyed an all too brief moment that came to be eclipsed by the emergence of Pop art?

It is interesting to note, for example, that the Self Portraits in this exhibition date to the late 1960s. The works parallel the very moment when Pop was dominating the attention of collectors, critics and curators. Johnson’s dark, introspective, crude and moody paintings, with a mordant palette of black and earth tones, could not have been more out of sync with the glitz and glamour of the zeitgeist. There was none of the irony and commentary on material culture that made Pop so accessible and topical.

From the vantage point of time and contemplation, those are the precise qualities that make Lester’s work of that period so unique, compelling and powerful. Now that the clamoring parade and charade of the fabulous 1960s has marched by we can focus attention on that solitary, long distance runner and phenomenal artist.

Contemplating the series of almost life size self portraits at Acme gallery it is unfathomable that they are not hanging on the walls of major American museums. Having twice visited and lingered on MoMA's epic scaled exhibition of the New York School and Abstract Expressionism it seems so obvious to me that Lester is the sequel to that phenomenon.

Given the loose, gooey, loaded brush technique of the late 1960s the paintings prove to be in remarkable shape. The rough, complex, scumbled surfaces appear to be intact. Upon close examination one notes that the juicy medium, loaded with stand oil and varnish, have shrunken and show the stretch marks of the drying process, which can take years.

We talked about how the rough surface texture was achieved. One might x-ray the paintings to note what is underneath. Perhaps some of the canvases were recycled and the textures suggest pentimenti but there were no specific forms revealed. It would be productive to consult with a conservator to understand how he derived such rich and complex surfaces.

Some of the tubular figurative forms, ham like fists and hands suggest the mechanical, monstrous, and robotic. Just what was the emotional impetus behind such figuration? What do these often bleak and grim figures state about his view of the human condition? Particularly when in the self portraits Lester melded himself with such a skewed and ominous vision.

Of the self portraits only one is detailed enough to reveal the features of the artist. In the others the face is bludgeoned by globs of opaque black paint. It is notable that several of the self portraits depict the artist standing in the act of painting with brush extended forward. The painting act was agressive and quick with the resultant drip which was a signfier of the action paintings of the New York School. It is an indicator of the extent to which Johnson was influenced by abstract expressionism but also determined to resolve its techniques and aesthetic with a return to the figure.

There is an existential pessimism to the grisaille works of this period that may be explained by a Beckett drama. There is that same post apocalyptical sensibility. Lester’s series of Men in Bowler Hats may indeed be simulacra of the clownish fools Vladamir and Estragon in Waiting for Godot. Like these forlorn characters might Lester’s rough trade evoke a desperate plea for salvation. Was he trapped in these paintings with No Exit in a world where hell is other people?

A low key, reserved “man of few words” Lester was never adept at playing the art world game. Particularly, during an era dominated by the media savvy shenanigans of the leading pop artists. With time, and critical attention, however, it may one day be established that Johnson, although pursuing a different aesthetic, deserves to be considered among the seminal masters of the era.

It was my intention, back in 1987, to start the process of placing Johnson and his uniquely potent work, into the proper historical and aesthetic context. For reasons that continue to confound me, Lester opted not to tell that story. It was deleted from the exhibition catalogue and resulted in a falling out with the artist.

On the occasion of the artist’s death I pulled the lost fragments of the original essay from a file cabinet and used it as notes for an obituary. Although we had not communicated for all those years it never changed my conviction of the status of Johnson as a singular artist.

That obituary in Berkshire Fine Arts attracted the attention of his heirs and Acme Gallery. I was invited to publish the essay in the current catalogue. Instead, I opted to revise and rework it. I am indebted to James Bennette who made excellent editorial suggestions. I hope that the publication advances a concise overview of Figurative Expressionism focusing on Lester’s prominence and accomplishments within the movement.

During our week in Boston to attend the conference of the Transcultural Exchange I was invited by David and James to give a gallery talk on Saturday afternoon. Mid week I dropped by to see the exhibition and was truly blown away. It was emotionally thrilling to be in the presence of so many superb works. Their editing and installation of the exhibition was sharp, keen and precise. Truly they have a great eye and insight for the unique strengths of the work.

The gathering in the gallery was intimate and emotionally overwhelming. It seemed that everyone sharing the experience had a personal and compelling reason to be there. My artist friend Martin Mugar had studied with him at Yale. It was wonderful to meet Lester’s granddaughters Julia and Stephanie DeTroy. My wife Astrid was deeply moved by the work. Leonard and Ann Marie Lewis, who are major collectors of Johnson and the subsequent Rhino Horn movement, shared their memories of the artist. Private art dealer Sunne Savage came by as did the artist Arnold Trachtman and his wife Joan. Toward the end of the event Sidewalk Sam rolled in making a dramatic entrance. There were other artists and friends of Lester and his family.

Rather than a lecture or gallery talk the occasion was more like a dialogue that morphed into a séance. Interacting with the work, and those who knew him, was so intimate and evocative that it felt like Lester was with us. Everyone shared their unique insights. We all felt that we learned something of value about the artist and his work.

In some ways the catalogue and gallery event created closure. But the warmth and insight of the experience also felt like a new beginning. There is a major legacy that needs to be better understood.

It raises the possibilities of alliances and projects including more research, exhibitions, and publications.

Stephanie DeTroy is now in art history graduate school and writing a thesis on Lester. I encouraged her to work on an inventory and catalogue raisonné.

It is a curatorial no brainer to organize an exhibition focused on Thompson, Muller, Johnson and the New York/ Provincetown School of Figurative Expressionism.

It is an important chapter of contemporary art that deserves to be documented. We owe this to the artists.