The Grown-Up at Shattered Globe Theatre. 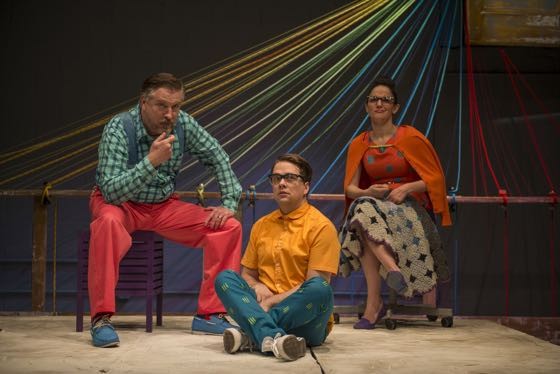 A meditation on time and life--and the problem of deciding when, if ever, you're a grownup. That's kind of the story of Jordan Harrison's The Grown-Up at Shattered Globe Theatre. Directed by Krissy Vanderwarker, the cast of six actors moves through 18 scenes of varying lengths. In each, Kai (Kevin Viol) has moved on in his life, aging a bit but still trying to believe in the magic of the future. The 75-minute play is impressionistic, sometimes entertaining, but the scenes don't create a coherent plotline and the story doesn't build our interest in Kai.

We first meet him as a 10-year-old listening to his grandfather (Ben Werling) tell a story about a magic doorknob. The man who built their house was an old sailor who had sailed as a cabin boy on a pirate ship. He survived a shipwreck with the only part of that great ship that survived: the crystal eye of the mermaid figurehead from the ship's prow. This magic doorknob can open the door to anywhere, his grandfather says.

"If you're feeling bored with your smartass 10-year-old self.... Just pull 'til it pops clean off. Then you stick that knob on any door you want, and the second the door opens you'll be someplace else." But where? Kai asks. Yes, there is a catch, his grandfather says. The catch is you can't choose where the doorknob will take you. You could end up a thousand miles away, or a hundred years ago.

In a game of hide-and-seek with his sister Anna Belle (Christina Gorman), Kai manages to lose her and uses the magic doorknob. Scenes on the pirate ship and with an old fisherman (Werling) are interwoven with more scenes with Kai. He's a writer, just moved from New York to LA. He meets Mr. See, a TV executive (Joseph Wiens) to pitch a new TV series "about a guy who gets time-jumped back" to a pirate ship. Later we meet Kai and his boyfriend, Steven (Bryan Bosque). Kai, now 40, is thinking about "what happens when we die." At the end, he's an old man, now blind, and a literary award winner. The magic doorknob in some form is part of every scene.

Cast members are identified as actors A, B, C, D, E and F. This may work for an audience member, but for someone reviewing a play, it's not always easy to be sure which actor is doing something. (Fortunately, the playbill bio section has actors' photos.) All the actors (except Viol as Kai) play several parts and they also deliver narrative lines--not as direct address--to fill in and explain the action.

Grant Sabin's set design is a simple platform with parts that open to provide access or props. A lamppost or ship mast stands at one side. The only furniture pieces are Container Store-type tables, a desk and a few chairs that the actors move on and off the stage. Costumes by Sarah Jo White are vividly colored street wear--in brilliant oranges, magentas, greens and aquas. No props are used; however, the magic crystal doorknob finally materializes at the end of the play.

The Grown-Up, Jordan Harrison's 12th play, premiered in 2014 at the Humana Festival of New American Plays at Actors Theatre in Louisville. This is its second production.

Shattered Globe presents The Grown-Up at Theater Wit, 1229 W. Belmont, through May 23. Performances are at 8pm Thursday-Saturday and 3pm Sunday. Tickets are $33 and can be bought online, at the theater box office, or by calling 773-975-8150.