Organized by by Okwui Enwezor 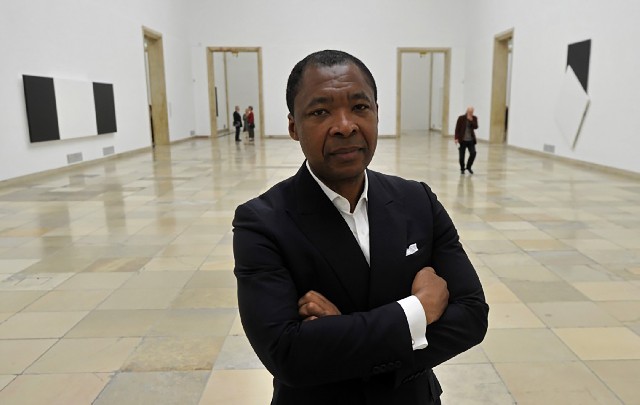 53 countries are participating from May 9th till November 22nd (2015) in the 56th Biennale of Venice which will take place at the traditional Giardini park, the Arsenale and in various other venues in Venice. The title chosen by Okwui Enwezor (Nigeria, 1963 curator and since 2011 Director of the Haus der Kunst in Munich) is “All the World’s Futures”. An interesting topic in a global art world, but Venice is still largely a biennial event to which countries send a representative artist!

The first reformed ‘Biennale di Venezia’ took place in 1999 and it was in that year, at the very beginning of a new chapter in its history, that it found itself having to respond to the many adverse comments it received. Many thought that an exhibition through pavilions was obsolete or at the very least an outdated concept in what was the much heralded era of globalization. Also the competition with the avant-garde Documenta, since 1955 in Kassel (Germany), played an important role to revise the concept.

“We accepted the criticisms, but not the solutions that some put forward, so we did not throw out the use of pavilions for the Biennale”, says Paolo Baratta, president of the Biennale. “The concept was clearer and the responsibility for showing the evolution of art around the world was better shared between the participating countries and ourselves”.

15 years since that reform and the start of this new chapter curator Okwui Enwezor can again demonstrate the usefulness of country receipts.

In his statement Okwui Enwezor takes a Paul Klee painting named ‘Angelus Novus’ as an example. This painting shows an angel, his face is turned toward the past. He looks to the storm and this storm is what we call “progress” is the definition of Enwezor to start its mission. The owner of the painting was the philosopher and cultural critic Walter Benjamin (Berlin, 1892 – Portbou, 1940), a critic who has had a major influence in the democratization of contemporary art in Europe.

Enwezor: “Benjamin saw in Klee’s picture what in fact, was not registered nor even painted in it. Instead he read Angelus Novus allegorically, seeing the picture with clear historical eyes, while facing another catastrophe unfolding in Europe at a time of immense crisis. By excavating the painting as the very reality unfolding before him, with the state of the world he knew being dismantled right before his very own eyes, Benjamin compels us to revision the representational capacity of art”.

How can the current disquiet of our time be properly grasped, made comprehensible, examined, and articulated? That is the question to which the curator expects a response from the artists.

The last two centuries changes the world radical: from industrial to post-industrial modernity; technological to digital modernity; mass migration to mass mobility, environmental disasters and genocidal conflicts, chaos and promise have made fascinating subject matter for artists, writers, filmmakers, performers, composers, musicians, etc. Changes that could not estimate by the angel of Klee.

A core part of the program are live readings. Since the publication of Karl Marx’s massive ‘Das Kapital’ in 1867, the structure and nature of capital has captivated thinkers and artists, as well as inspired political theorists, economists, and ideological structures across the world. In All the World’s Futures, the aura, effects, affects, and specters of Capital will be felt in one of the most ambitious explorations of this concept and term. It’s a massive, meticulously researched bibliographic project, conceived by the artistic director in the Central Pavilion. This program, occurring everyday for nearly seven months, without stop, will commence with a live reading of the four volumes of Marx’s Das Kapital and gradually expand into diverse discussions and explorations of Capital today. Is it a discussion between supporters and opponents or a political statement?

All the World’s Futures will take the present “state of things” as the ground for its dense, restless, and exploratory project that will be located in a dialectical field of references and artistic disciplines. How can artists, thinkers, writers, composers, choreographers, singers, and musicians, through images, objects, words, movement, actions, lyrics, sound bring together publics in acts of looking, listening, responding, engaging, speaking in order to make sense of the current upheaval? What material, symbolic or aesthetic, political or social acts will be produced in this dialectical field of references to give shape to an exhibition which refuses confinement within the boundaries of conventional display models?

The exhibition returns to the ancient ground to explore the changes in the global environment, to read the Giardini with its ramshackle assemblage of pavilions - and participation of 53 countries - as the ultimate site of a disordered world, of national conflicts, as well as territorial and geopolitical disfigurations. The Biennale, founded in 1895, is a Filter of art with a great tradition, it’s not an art market but an explorer of today’s art.