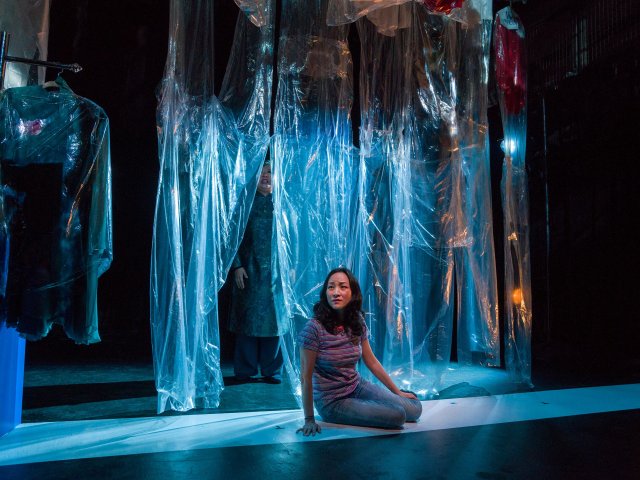 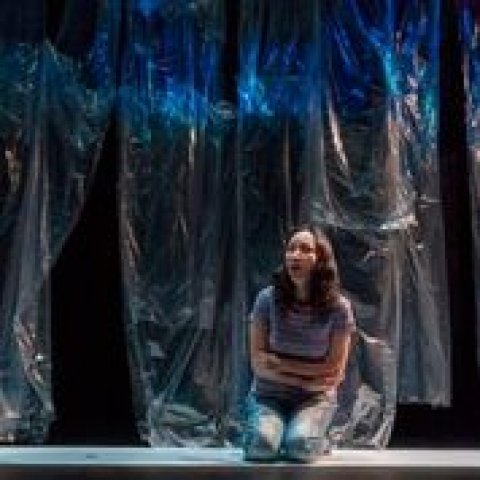 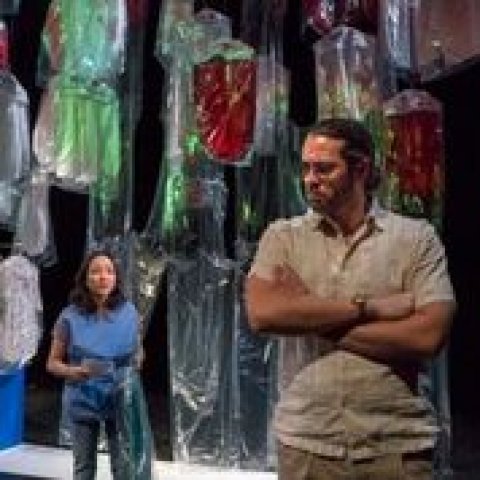 Diane tries to get flexibility from her boss 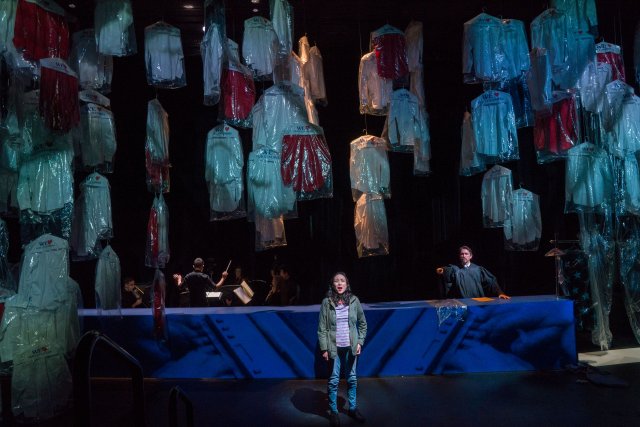 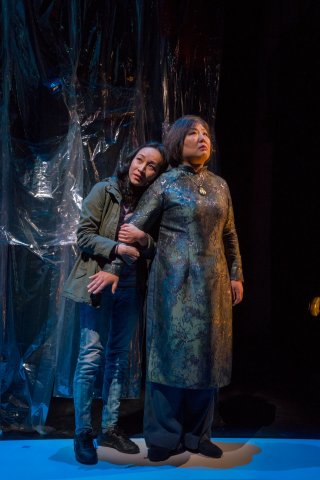 If Diane can feel her mother's presence, she can survive 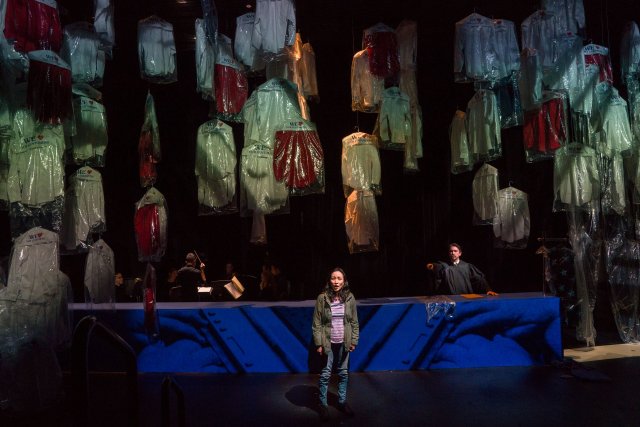 Diane, caught in a strange country

Bound, Huang Ruo's chamber opera, is produced at the Rose Nagelberg Theatre in the Baruch Performing Arts Center through April 18, 2019. Originally commissioned by Houston Grand Opera, this production is the New York premiere.  It is a fresh take by Freshly Squeezed Opera.  Ashley Tate who specializes in multi-media production, directs.

Like their Chinese immigrant predecessors, Vietnamese refugees worked in cleaning establisments.  In this instance, spiffing up garments is an effort to enhance the American experience.  In their own country, Americans ruined everything.

The opera is based on the real story of Diane Tran of Willis, Texas.  Tran, an A student in 11th grade, was jailed for truancy.  Abandoned by her mother and father, Tran is the sole support of her siblings.  In addition to attending school when she can, she works two jobs.  Her academic performance is not affected by  erratic attendance, but the Judge before she must appear on truancy charges can only articulate, over and over, America is a country governed by law.

This opera is truly a monodrama.  The characters are seen through Tran's eyes and heart.  Fang-Tan Jiang is remarkable as Tran.  Andrew Wanningham as her boss in the cleaning shop is harsh and exacting, focused on his watch.  Time will tell whether Diane has a job or not.

Americans never looked at the ways of the Vietnam people before charging into the country to continue the work of the French. Similarly the Judge is unable or unwilling to look at the reality of Tran's situation. Daniel Klein is cruelest of all.  There is no bending of the law on school attendance to recognize Tran's superior grades and  need to support a family at the same time.  This should not surprise, because the setting is Texas.  Diane's prism view of him is more accurate than interpretative.

The portrait of Diane's mother, who appears as a ghost, gives a rich sense of the refugee experience.  The mother left before her parents died and she does not know where they are buried. She needs them, just as her daughter needs her.  She can not rise to the demands of being a mother because she is crushed by memories.  Gung Yang, the great mezzo, has expresses confusion, anguish and despair in each note she sings.

The hope of this tale is that Diane will be able to see and feel her mother's presence in all its complexity.  We do. This may offer Diane a chance to go on.

The set by Stephan Moravsky is a marvel of simplicity and invention.  Clean garments on hangars in their see-through bags reflect light as does the music.  The ghost of the absent mother hovers behind the garments.

A small orchestra is comprised of flute, clarinet, violin, cello, trombone, piano and pipa. Composer Huang Ruo has a special touch in combining the harmonics of East and West.  He can suggest the separate identities and then weave them together as the worlds meet.  His trombone tones provide a textural bass to what is an ugly story.  The clarinet often sings.  The violin can irritate as the world grinds on without a satisfactory answer. The classic Asian pipa (aka the Chinese lute) comes in to reflect both Tran's delicacy and strength.

Huang Ruo's greatest asset is in composing a difficult story in music.  It is a pleasure to watch him do this over and over.