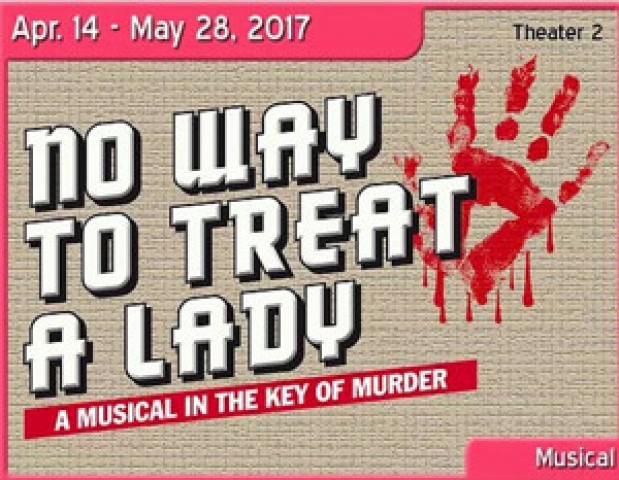 There are times when we like bad, even horrible people.

Look no further than musicals such as “Peter Pan” (who doesn’t like, or at least have fun with Captain Hook?) “Chicago,” “A Gentleman’s Guide to Love and Murder,” and “Sweeney Todd.”

Characters in these types of shows are usually either colorful, hilariously inept, basically buffoons, or we can relate to their life’s circumstances or recognize ourselves in them. Perhaps we wish to dig deep into their souls to find their humanity and we discover it.

Of course, we hardly condone what they’ve done, especially if they’re murderers. But maybe, throughout the course of watching, we unearth the demon or evil inclination within us which, perhaps,  we never knew we had.

What Kit Gill does in the comic thriller musical “No Way to Treat a Lady,” is, well, no way to treat a lady -- or anyone. He brutally takes the lives of women. But to Gill, a failed actor living in 1970 New York City, the act of committing murder is an art form, complete with donning a variety of disguises and leaving lip stick on his victims.

“For Kit, murder is the ultimate performance and not a gruesome exercise,” reads a description of his character on licensor Samuel French’s website. “His youthful, almost angelic face masks his demonic tendencies. An actor oozing with charm is essential if the audience is to be seduced along with his victims. His performance should demonstrate he is a musical comedy performer gone awry.”

As portrayed by James Hansen in Broward Stage Door Theatre’s otherwise mostly solid production of “Lady,” directed with entertaining over-the-top theatricality by Sean McCleland and running through May 28, Gill’s mind has gone awry all right, but in a dark, dangerous direction. There’s no hint of a musical comedy performer or anything charming in Gill, who lost his stage star mother and failed to experience success as a performer.

With his dark, almost diabolical eyes blazing with ambition, dangerous desperation, cunning and playfulness that makes his layer of menace all the more sinister, Hansen’s calculating Gill suggests a young bad-boy persona. Through this portrayal, Gill is someone you instantly recognize as perhaps a gang member. There’s little to like or be “seduced” by him. The couple of times we might sympathize with Hansen's Gill is when his face all-too-briefly turns sweet and innocent while addressing his late mother, who appear as a ghost in the show.

This production’s comedy would be greatly enhanced by an innocent, seemingly well-meaning Gill whose mind simply went bonkers after failed attempts at acting. The contrast between a charming exterior and Gill’s dastardly deeds would add up to pitch black comedy.

That’s the type of humor we get in the Tony-Award-winning musical “A Gentleman’s Guide to Love and Murder,” about a young man who’s an heir to a family fortune. Monty Navarro is a charming, youthful man whose ambition gets the best of him as he tries to climb his way to earldom. In the process, he acts innocent, and remains fresh-faced as he kills eight family members ahead of him to inherit the earldom of Highurst.

In the process, Navarro becomes somewhat of a celebrity, a status that “No Way to Treat a Lady” satirizes, a la “Chicago.”

Like in that mega-popular musical, now in its 20th year on Broadway, the award-winning, comic, riveting Off-Broadway hit “Lady,” shines a light on our obsession with celebrity, even when it takes the form of notoriety. While “Chicago” has its infamous merry murderesses, “No Way to Treat a Lady’s” primary celebrity seeker is mass murderer Gill. He leads a detective, Morris Brummell, on a mad cat-and-mouse chase.

Brummell is also guilty of having an excessive taste for celebrity. He and Gill want the story of the murderous rampage on the front page of the New York Times (no failing status for the grey lady here, at least as far as these men are concerned).

“Yes! He killed another! Oh, I am onto you, you son of a gun,” exclaims a triumphant Brummell at one point.

We might be able to identify more with Brummell than Gill. He hardly has a life beyond his work and he craves some excitement in his life. Here’s this heavyset, fully-grown man still living with his meddling, somewhat overbearing Jewish mama (Kimberly Abrams, who could be more believable in the part but slips seamlessly into other roles, displaying impressive diversity and theatricality in the process).

Brummell’s played with convincing nervous energy and modesty by Dustin Cunningham, who also endows his character with intensity and an eye-rolling exasperation at his mother’s eccentric ways.

Cunningham also conveys a tender feeling for Sara Stone, a socialite he meets while investigating the Gill case. The romantic aura of these scenes is enhanced by Ardean Lanhuis' soft lighting.

In a multi-faceted performance, Andrea Arvanigian plays Stone with a sophisticated, confident (but not arrogant), socially-proper, calm air, contrasting nicely with the knot of nerves into which Cunningham twists Brummel.

There’s further contrast in this production, notably in McClelland’s period set design, based off an original design (McClelland doubles as set designer).

The peaceful, immaculate Brummel apartment, complete with a white tablecloth, candlesticks and neatly bowed curtains all contrast with the brick walls, street garbage can and ladder outside the home. The exterior scenic elements neatly convey the rough and tumble streets of 1970s New York, a decadent period in the Big Apple when crime was rampant there (who, living during that decade, can forget the “Son of Sam” serial murders in 1977.) The wide, curving, connected set also includes Stone’s home, suggested by an extravagant couch, and Gill’s theater-like home, complete with a curtain, suggesting his theater background.

The sense of such a background, unfortunately, is missing from Hansen’s dark, sinister performance that turns Gill into mostly a monster.