Joan Rivers at the Colonial Theatre 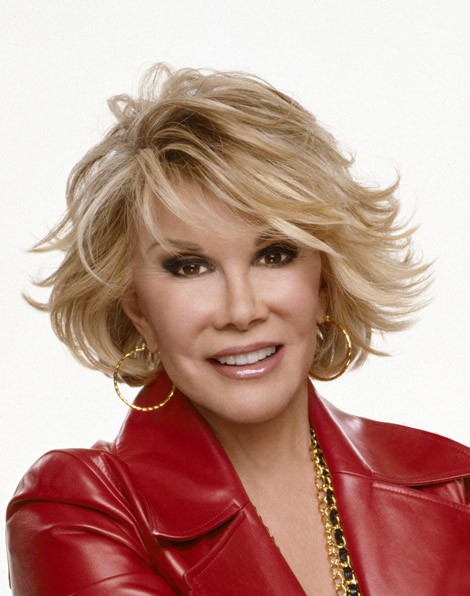 Joan Rivers is coming to the Colonial Theatre in Pittsfield.

Legendary comedian, Joan Rivers, will perform her world renowned stand up at The Colonial Theatre on May 10 at 8pm with opener Brad Zimmerman. Audience members are invited to walk the red carpet before the show and stay after to see Tom Judson sing and play the piano in The Garage.

Tickets to Joan Rivers are $50-$125. Contact the Colonial Ticket Office at 111 South Street, Pittsfield by calling 413-997-4444. Tickets can also be bought online at www.berkshiretheatregroup.org. The Ticket Office is open Monday-Friday 10am-5pm, Saturdays 10am-2pm or on any performance day from 10am until curtain.

Joan Rivers is a force of nature – one of the hardest working celebrities in the world. She has enjoyed an illustrious career spanning more than four decades in the entertainment industry and beyond, and as her recent accomplishments reveal, she's as robust and hardworking as ever.

After creating and hosting Live from the Red Carpet for E! (1996-2004), Joan returned to anchor that network's popular and successful franchise Fashion Police, hosting both its hour-long weekly broadcasts and its awards-season specials. From hot new trends to red-carpet risks, Joan hilariously takes viewers through a recap of the week's celebrity fashion and ultimately decides who sizzled and who fizzled.

Joan also dominates the world of reality TV with her daughter, Melissa Rivers, in their weekly hit series on WEtv, Joan and Melissa: Joan Knows Best? – now in its third season. This inimitable duo addresses the question that has plagued daughters since the beginning of time: Does mother truly know best?

Joan is also a vastly accomplished author, and her 11th book, I Hate Everyone.…Starting With Me, was published by the Penguin Group in June 2012. It instantly became a New York Times Bestseller. Prior to that, she wrote the bestsellers Men Are Stupid and They Like Big Boobs: A Woman's Guide to Beauty Through Plastic Surgery and Murder at the Academy Awards: A Red Carpet Murder Mystery, both published by Simon & Schuster.

The 2010 critically acclaimed, no-holds-barred documentary, Joan Rivers: A Piece of Work premiered during the Sundance Film Festival and was released in theaters nationwide that summer. The film is currently available on DVD and Netflix.

In 2009, Joan starred in NBC's hit reality-TV competition series The Celebrity Apprentice, along with Melissa Rivers. Joan emerged as the second season's winner.

Also in 2009, the iconic funny woman was honored during The Comedy Central Roast of Joan Rivers. That year as well marked the debut of her TV Land reality show, How'd You Get So Rich?, which, for two seasons, took a candid look at the extravagant lifestyles of fabulously rich American entrepreneurs and innovators.

No stranger to the world of animation, in addition to lending her unique voice to Shrek 2 and Spaceballs: The Animated Series, Joan received a Daytime Emmy Award nomination in 2009 for her portrayal of "Bubbe” on PBS' award-winning animated children's series Arthur. In 2011, she voiced Annie Dubinsky, the hard-talking agent of Krusty the Klown on The Simpsons.

Joan Rivers is a true pioneer: She created her own brand of irreverent, unconventional comedy and forged her own remarkable rise to stardom in the entertainment world. Enduring tawdry clubs, Borscht Belt showrooms, and grimy Greenwich Village cabarets, her career skyrocketed in 1968 when she appeared on The Tonight Show Starring Johnny Carson. Within three years she was hosting That Show with Joan Rivers, one of the first syndicated daytime talk shows. She soon made television history as the permanent guest host of The Tonight Show and helped launch the nascent Fox Network in 1986 with The Late Show Starring Joan Rivers. In 1989, Joan triumphantly returned to daytime TV with The Joan Rivers Show, winning an Emmy Award for Outstanding Talk Show Host.

Joan continues to dazzle live concert audiences in Atlantic City, Las Vegas and across the entire country. In October 2012 she returned to the United Kingdom for a sold-out international concert tour – her first since 2005. She also continues to perform in Canada, the Caribbean, and Australia.

Since she was a child, Joan has loved the theatre. In 1986, she starred in Neil Simon's Broadway Bound, and in 1994 co-wrote and starred in Sally Marr and her Escorts, for which she was nominated for a Tony Award for Best Actress in a Play. Joan continues to explore personal theatrical endeavors, most recently with The Joan Rivers Theatre Project, which she co-wrote and starred in. The show ran for a limited workshop engagement at the Magic Theatre in San Francisco before opening to rave reviews as Joan Rivers: A Work in Progress by a Life in Progress at the Geffen Playhouse in Los Angeles. She enjoyed six sold-out weeks in L.A., followed by another sold-out run in 2008 at Scotland's Edinburgh Fringe Festival, as well as a successful three weeks at London's Leicester Square Theatre.

Joan's unique brand of humor, along with her compassion and tenacity, has enabled her to triumph over personal tragedy and reach extraordinary professional success. These traits, along with her love of fine art, antiques, and vintage jewelry, have driven Joan to keep her finger on the pulse of the latest trends, and she is widely considered America's most visible, accessible, and authoritative fashion spokesperson. In 1990, Joan launched the Joan Rivers Classics Collection of fashion jewelry, apparel and accessories on QVC, and was honored with an ACE Award for her work by the Accessories Council. Joan's collection was an instant, enormous success and remains so today not only in the U.S. but on QVC in the U.K. and on The Shopping Channel in Canada.

Despite being constantly in motion, Joan continues to work tirelessly on behalf of charities that are close to her heart: God's Love We Deliver, The American Foundation for Suicide Prevention and Guide Dogs for the Blind. She also dedicates her time to the National Osteoporosis Foundation and Wounded Warriors, among other organizations.

From her trademark question, "Can we talk?,” to her red-carpet creation, "Who are you wearing?,” the woman who asks all the right questions gets the answers America – and the world – want to hear.

Brad Zimmerman
Brad Zimmerman is a very unique and original voice in the world of comedy. He works all over the country, performing in theatres, comedy clubs, casino's, country clubs, comedy festivals, JCC's. He has worked with many well known comedians and entertainers such as Brad Garrett, Dennis Miller, Susie Essman, Julio Inglesias, and has been Joan Rivers' opening act of choice for over 7 years. In fact Joan has said "I've had 3 great opening acts in my lifetime: Billy Crystal, Garry Shandling, and Brad Zimmerman.” In 2006, Brad had the great honor of opening for George Carlin, and that relationship lasted until George passed away in 2008. Brad combines years of acting training and standup, which is evident in Brad's one man show, My Son the Waiter, a Jewish Tragedy. In this part standup/part theatrical piece Brad tells the story of one man's lengthy struggle to make it as an actor in New York. His send-ups on his childhood, his family, his misbegotten love life, and his career are as warm and poignant as they are hysterical. He has performed the show all over the country, and will be performing it in New York this coming fall. In addition to this show, Brad has done work in both television and film, most notably playing Johnny Sack's lawyer in The Sopranos.

Tom Judson
Tom Judson has appeared onstage as a singer, musician and actor. His cabaret shows have been seen in New York City at The Metropolitan Room, 54 Below and in rooms across the country. He has composed music for off-Broadway (Vampire Lesbians of Sodom) film (Whit Stillman's Metropolitan) television (Sesame Street) and has written songs for the likes of Ann Magnuson, Lisa Kron, Charles Busch and others too numerous to mention. Tom appeared on Broadway in Cabaret, in the 42nd Street National Tour and many off Broadway and regional productions. His one-man show Canned Ham toured the country for two years. For two seasons in Provincetown he performed as accompanist and second banana to drag chanteuse Varla Jean Merman. In 2006 Tom became the oldest recipient of the GayVN Performer of the Year Award. Also an author, Tom recently published Laid Bare, a collection of his essays and magazine columns.

For more information about the performance, please visit our website at www.BerkshireTheatreGroup.org