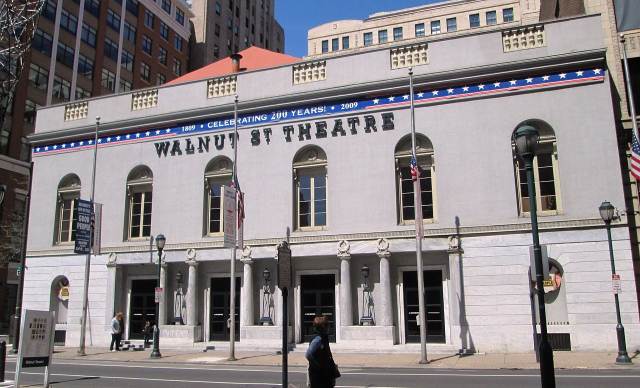 PHILADELPHIA, Pa. -- Take an American history buff to Philadelphia, and chances are that person will feel like a kid in one of Santa's toy- and candy-filled workshops on a snow-swept North Pole during Christmas.

In the City of Brotherly Love, if you're looking for tidbits and exhibits about our country's founding, you'll find them.

Similarly, a look at the live, thriving theater scene in Philadelphia will make aficionados feel like that aforementioned youngster.

The city's array of theater companies and offerings keep many a theatergoer -- and theater critic -- busy.

Members of the American Theatre Critics Association, an organization comprised of people who write about live theater, learned just how much Philadelphia is associated with that art form. The critics recently gathered for their annual conference, during which they saw shows, held elections for different posts, expanded the organization's membership criteria and heard from speakers associated with Philly's arts scene.

"In our time, theater here began to blossom about 25 years ago," wrote Howard Shapiro, a Philadelphia-based theater critic and the conference chairman in a welcome note to attendees. "And about 15 years ago the scene exploded. Of the 50-plus stage companies that pay their actors, designers and creative teams, about 35 hold Actors' Equity contracts at any given time.

"Metropolitan Philadelphia is now home to more than 1,000 Equity members, plus sizable communities of scenery, costume, lighting and sound designers; directors and playwrights.

"The theater community is a minor Philadelphia industry."

Yes, Philadelphia these days is much more than just a "try out town" for Broadway-bound productions. Its industry is year-round, permanent and thriving.

That industry includes America's oldest theater company -- The Walnut Street Theatre, located at the corner of Ninth and Walnut Streets, a national historic landmark and the state theater of Pennsylvania.

Since its doors opened in 1809, stars such as Henry Fonda, Katharine Hepburn and Marlon Brando have graced its stages. Many of American theater's best works premiered at "The Walnut," including "A Streetcar Named Desire," "A Raisin in the Sun" and Neil Simon's first Broadway play, "Come Blow Your Horn."

In 1982, The Walnut Street Theatre became a not-for-profit company and today boasts more than 56,000 subscribers annually. That makes it "the most subscribed theater company in the world," according to the back cover of the book "Images of America: Walnut Street Theatre." The publisher is Arcadia Publishing (www.arcadiapublishing.com)

Ralph Weeks, the company's director of marketing and public relations, said the company is committed to hiring local artists before those from out-of-town.

"We reinvest in our city," he said.

"We worship our subscribers," he said.

Weeks said altogether, the company reaches 350,000 people a year, 180,000 through educational and outreach programs and 400 through performances staged at schools.

The Walnut Street theater's walls are lined with posters boasting the many shows the company has staged over the years. It looks like an exhibit you'd see in a museum. Photographs of the many stars who've graced its stages are also on display.

The company is in the midst of a robust production of "Peter and the Starcatcher," a prequel to "Peter Pan" by Rick Elice, who adapted it for the stage from the novel by Dave Barry and Ridley Pearson. The play relates the series of events leading up to the forever youth flying into the Darling family's Victorian-era British home. Puns, wordplay, potty-humor and physical comedy abound as does drama and touching moments.

For more information about The Walnut Street Theatre, including its next season and ticket information for "Peter and the Starcatcher," log onto www.walnutstreettheatre.org.

In stark contrast to the mostly escapist prequel to many people's favorite fairy tale, the thought-provoking, controversial play "An Octoroon" just finished a run at the Wilma Theater which, founded in 1973, is a baby compared to The Walnut.

"An Octoroon" relates the tale of a slave owner's affections for a woman whose blood is one-eighth black.

This explosive, bold play, presented with a black actor in whiteface and others playing slaves in blackface, has the power to provoke and disturb, especially with the topicality of racial issues today.

In concurrence with director Joanna Settle's goal to jump start conversations about race within Philadelphia and surrounding areas, several cast members served as "teaching artists, leading pre-show discussions in local schools before students attended matinees at the Wilma. Its mission includes creating "living, adventurous art. We engage artists and audiences in imaginative reflection on the complexities of contemporary life. We present bold, original, well-crafted productions that represent a range of voices, viewpoints and styles," according to its website.

At the Wilma, the theater-going experience doesn't end after the actors take their final bows and the curtain closes for the last time for a particular performance.

"With each production, the Wilma offers free or low-cost discussions which address topics and themes relevant to the play," the website reads. "Our Student Sunday Program exposes students to live theater, providing tickets for as little as $10. Our Fellowship and Internship Programs provide valuable training to students and recent graduates in all aspects of professional theater.

"A record number of students will also be participating in Wilmagination, the Wilma's fully subsidized educational outreach program, through in-school residences around 'An Octoroon' in Philadelphia public high schools," according to press material, written in advance of the production."

The Wilma's located at 265 S. Broad St. and on the web at www.wilmatheater.org.

Speaking of education, critics attending the conference as well as audience members taking in a performance of August Wilson's "Two Trains Running" received a brief lesson about the renown late playwright from Christopher Rawson, senior theater critic for The Pittsburgh Post Gazette and KDKA, as well as a faculty member at the University of Pittsburgh who's highly involved in the American Theatre Critics Association. He has a Ph.D in English Literature and teaches satire, criticism, Wilson and Shakespeare.

Rawson's accomplishments have included chronicling in depth the playwright's career, beginning with Wilson's Broadway debut in 1984. Rawson was "the first to suggest in print Hill District locations for Wilson's plays," according to a brief biography of Rawson in a book co-written by him: "August Wilson: Pittsburgh Places in His Life and Plays."

For information on where and how to buy the book, call the Pittsburgh History & Landmarks Foundation at 412-471-5808. Its website is located at www.phlf.org.

Rawson's address garnered applause and prompted questions from the audience. They learned, among other things, the significance of the character Aunt Ester, a mythic Wilson character purported to be centuries old. She's a recurring character in Wilson's plays and her name holds significance, Rawson said. Keep saying "Aunt Ester" and you might eventually realize it sounds like "ancestor," he added.

To many of Wilson's characters, this "aunt" is an ancestor who stretches back to the early days of slavery. In the plays, she's part psychotherapist, part spiritual adviser and part advice dispenser.

In "Two Trains Running," a run of which the Arden completed on April 10, the setting is 1969 Pittsburgh. The play's a part of Wilson's "Pittsburgh Cycle," a collection of 10 plays documenting the African American experience in each decade of the 20th century. All of the plays, except for the Chicago-set "Ma Rainey's Black Bottom" (1920s) are set in Pittsburgh's Hill District. Characters, such as Aunt Ester, repeatedly appear at different stages of their lives. The cycle, in the order of the decade in which the plays are set, begins with "Gem of the Ocean" (1900s) and ends with "Radio Golf" (1990s).

In "Two Trains Running" (1960s), urban renewal and eminent domain are forces with which the owner of Memphis Lee's diner must contend. His restaurant's scheduled to be torn down as a result of a renovation project. A sense of community and solidarity, which the characters are trying their best to grasp onto, clashes with a quickly changing world.

Great theater, among other things, spurs conversation about how events in a particular work mirror what's happening in our lives and present-day society. Many theater companies host various discussions related to a production, such as the parallels between a play's themes and actions and current events. The Arden hosted a talk about urban renewal and eminent domain in "Two Trains Running" and in Philadelphia today.

The Arden, founded in 1988 and located at 40 N. 2nd St. and on the web at www.ardentheatre.org, "is dedicated to bringing to life great stories by great storytellers -- on the stage, in the classroom and in the community," according to its website, which presents that mission in greater detail.

Over on Broad Street, the mission of the Philadelphia Theatre Company is to produce, develop and present "entertaining and imaginative contemporary theater focused on the American experience that ignites the intellect and touches the soul," according to www.philadelphiatheatrecompany.org. The company's Suzanne Roberts Theatre is located at 215 S. Broad St.

Executive Director Sara Garonzik said new play development is an integral part of what the company does, focusing on "work by emerging writers." She added it reaches out to high schools across Philadelphia, providing, for example, resources for teachers.

The company was founded in 1974 and has produced more than 140 world and Philadelphia premieres. The company has created the Terrence McNally New Play Award, named after the multi-Tony Award-winning, prolific playwright.

"We believe that the inherent humanity found in McNally’s work, along with his belief in the indelible impact that art and beauty can make on our individual and universal soul should be recognized and celebrated," theater company officials wrote on the website.

The play the company's staging, "Sex With Strangers," deals with, among other things, the trust-factor when it comes to identity in today's digital age. It's a sexy, juicy and meaty play for a roughly two-hour show.

For more information about the show or theater company, or for tickets, log onto the company's website at www.philadelphiatheatrecompany.org.

It's a leadership organization "that celebrates and promotes professional theater in the Greater Philadelphia region, primarily via the Barrymore Awards for Excellence in Theatre and related theater marketing efforts," according to the website.

The Barrymore Awards, recognizing greatness in Philadelphia theater, has existed since 1994.

Dan Hodge of Philadelphia Artists' Collective deserves such an honor for his riveting, nuanced, portrayal of seven characters in his stage adaptation of Shakespeare's narrative poem "The Rape of Lucrece." Hodge began performing the play a year ago in September. Shakespeare's difficult language not only flows effortlessly from Hodge's mouth, but he conveys the varied emotions behind each and every word. He's obviously internalized the meaning behind every one of them.

Through a variety of vocal inflections and a deft use of pauses and gestures, Hodge seamlessly changes emotions, ranging from a dream-like state to a frightfully violent demeanor to pain and fear, which is convincingly etched into his face at appropriate times.

Hodge performs his adaptation using nothing more than a treasure chest and a candlelight as scenery. You know you're watching a great performance when you don't know a thing about the play, much less understand its language and yet you're riveted to the stage. Hodge, a thin man with brown eyes, brain hair, same color mustache and sideburns that extend to his mouth, is co-founding artistic director of Philadelphia Artists' Collective. Its "committed to promoting rarely performed classical plays through workshops and readings in the greater Philadelphia area."

Hodge was nice enough to take time out of his busy schedule to perform his adaptation for critics in the morning in a meeting room of the Courtyard Philadelphia Downtown. The Courtyard served as the hotel for this year's American Theatre Critics Association conference, which takes place every year. Attending critics voted to hold next year's conference in San Francisco. They also voted to broaden membership criteria for membership to admit those writing about theater without necessarily doing traditional reviews.

So...if you wish to join a vibrant, knowledgeable, friendly, insightful and helpful group of people who share your love of theater and wish to spread that love and serve as a springboard for discussion about the art form, visit http://americantheatrecritics.org. You can also learn more about what transpired at the conference by visiting the website.