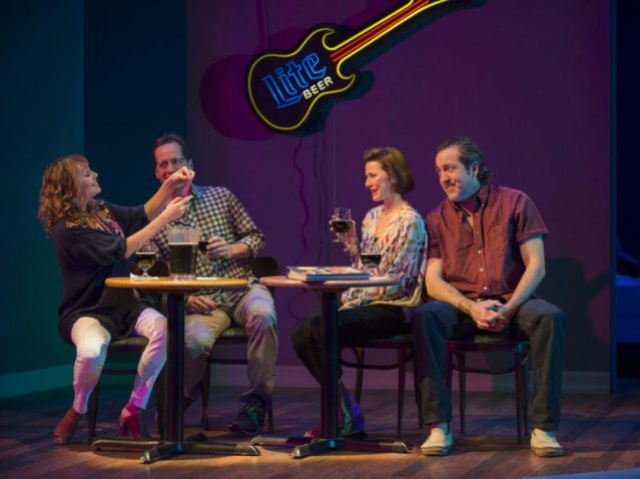 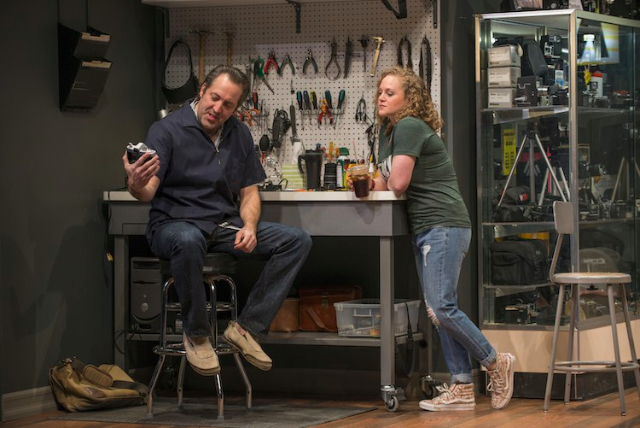 Barford and Neff at the camera shop.

Linda Vista, in its world premiere at Steppenwolf Theatre, is a smart and thoroughly entertaining production—a very adult comedy—funny, sexy and poignant. Dexter Bullard, who directed The Flick and has directed Letts’ plays before, has created a fast-moving story of lust, comedy and betrayal.

The title refers to the San Diego community where 50-year-old man-child Wheeler moves while he’s going through a divorce and tires of sleeping on a cot in his ex-wife’s garage. Ian Barford, a Chicago and Steppenwolf veteran, totally inhabits this role as an opinionated, failed photographer now working as a camera repairman. (And how long can that career path last anyway?) Life never turned out as he expected it to, but he’s not reflective enough to figure out why.

As the play opens, Wheeler and his old friend Paul (Tim Hopper) are moving Wheeler’s boxes into the new apartment. They were longtime friends in Chicago, where Wheeler worked as a news photographer for the Sun-Times. They all eventually moved to San Diego, where Wheeler’s wife, Kelly, had family. Many years later, Wheeler still seems like a Chicago guy, a fish out of water in sunny warm California.

Linda Vista revolves around Wheeler’s relationships with three women. Anita (Carolyn Neff) is his fellow employee at the camera shop. Shop owner Michael (Troy West) lusts after her and doesn’t hesitate to make statements that should get him charged with sexual harassment. Wheeler also lusts after Anita, as he does after almost every woman. At this point in his post-marriage life, he still hasn’t improved his sex life.

Paul and his wife Margaret (Sally Murphy) decide to fix up Wheeler with their friend Jules, a life coach (Cora Vander Broek shines in this role). They meet, skirmish and end up hitting it off. Really hitting it off. They finish the evening at Wheeler’s apartment.

The third woman in Wheeler’s life is Minnie (Kahyun Kim), an unemployed millennial whose boyfriend has gotten her pregnant. They meet in a bar and later—on the night Wheeler and Jules get together—Minnie lands on Wheeler’s doorstep with no place to go. That’s how triangles get started.

As artistic director Anna Shapiro says in her playbill welcome, “I have loved Wheelers and been hurt by them.” Indeed.

Letts is a master of dialogue and Linda Vista sparkles with some terrific character speeches, such as Wheeler’s discourse on his taste in music in act one. He likes jazz and the Talking Heads and hates Radiohead. “I’m a misanthropic piece of shit,” he says later.

And Margaret’s picnic speech castigating Wheeler for his treatment of women, had women in the audience thinking, “You go, girl.”

“I’m truly sorry if I’m less than supportive of your new girlfriend. Because I feel so freaking sorry for this girl, you have no idea. I don’t know how you do it but you’ve bamboozled another one into buying your shtick, and your shtick is old and tired.”

The audience was clearly emotionally involved with the characters. There were gasps at various times, such as when Wheeler commits a particularly clueless act of infidelity or rationalization.

Bullard has done a terrific job of directing this cast of seven. The play runs 2 hours and 50 minutes (one intermission), but it never drags, even in the first act, in which a lot happens. Todd Rosenthal’s inventive set design, built on a turntable, finds ways to set small minimalist scenes as well as fully furnished spaces like Wheeler’s living room and bedroom and the camera shop. Marcus Doshi’s lighting and Richard Woodbury’s sound design are crucial elements. Laura Bauer’s costume design is flexible and enhances each character’s style. My favorite touch is Anita’s final scene, when she wears a properly stressed Joy Division t-shirt dedicated to the band’s 1979 debut album, Unknown Pleasures.

Playwright Tracy Letts says that Linda Vista might be his favorite play of his actor-writer repertoire. It may be my favorite too, although I have always had a soft spot for his nasty reprobate, Killer Joe. Letts’ newest play, The Minutes, will be staged by Steppenwolf in November and transferred to Broadway for a 2018 opening.

Linda Vista continues at Steppenwolf Theatre, 1650 N. Halsted, through May 21, with performances Tuesday–Sunday. Tickets are $64-94 with discounts available. Call 312-335-1650 for tickets and info.