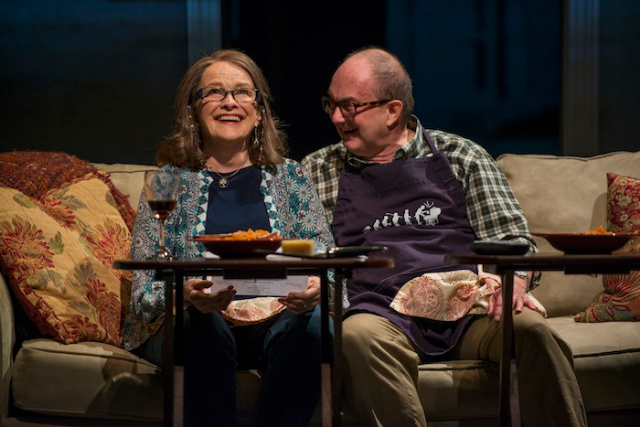 Mary Page Marlowe is an ordinary woman, living in US flyover country. (How I hate that term.) She has a couple of failed marriages, loses her job as a CPA, drinks too much, moves from Dayton to Lexington (to the distress of her teenaged daughter), and suffers other family tragedies. And she serves prison time for causing a serious accident while DUI.

Tracy Letts’ script for the Steppenwolf Theatre world premiere production, Mary Page Marlowe, explores her identity in 11 scenes and 80 minutes. In his dramatic deconstruction of a life, the scenes are not performed in any ordered way and Mary Page is represented from age 12 to 69 by six different actors. (And a baby doll. Originally three actual infants were to alternate as infant Mary Page, but director Anna D. Shapiro decided during previews that was too much verisimilitude. Shapiro has children herself, so I don’t know why she thought a baby would do what it was being directed to do. Directing babies would be like herding cats.)

Shapiro directs the story skillfully and finesses around the time and information gaps between scenes and Mary Page’s life events. We know that Mary Page did time, but we don’t know the details of her prison life. Her divorces happen off stage. Other traumas are hinted at, but not revealed.

The 11 short scenes—7 to 8 minutes each–are well written with naturalistic, sometimes sparkling, dialogue. The problem is that the parts are greater than the whole and the whole really doesn’t come together as a coherent story. In the final scene in a dry cleaners’ shop, Mary Page discusses a dry cleaning project that is symbolic of the play as a whole.

In an interview in the playbill, Letts recalls his 17-year-old self and feels he is both very similar and very different from that person. “And that’s the jumping off point for the play, the idea that we are actually different people at different times in our lives.” He also quotes Joan Didion at the beginning of his script, saying “I think we are well advised to keep on nodding terms with the people we used to be, whether we find them attractive company or not.”

That concept plays into the idea of having different actors play different versions of Mary Page. Among the many characters who populate her life are some you might like to see more of. Ian Barford and Alan Wilder, for instance, play two of Mary Page’s husbands. The six actors who play the leading role are Blair Brown, Carrie Coon, Laura T. Fisher, Caroline Heffernan, Annie Munch and Rebecca Spence. Madeleine Weinstein plays her daughter Wendy. The other busy Chicago actors who appear briefly include Kirsten Fitzgerald as Mary Page’s shrink and Sandra Marquez as a nurse. Most of the 18 actors are on stage for only one scene.

The play’s simple set design, created by Todd Rosenthal, rolls each scene’s furnishings on seamlessly. Projections designed by Sven Ortel establish the backdrop or “wallpaper” for each scene—bookcases and a picture window for an office, or a house exterior for a domestic scene. At times we glimpse the shadowy figures of other Mary Pages behind the scrim, as if they are observing other figures from their pasts.

Mary Page Marlowe continues in the Downstairs Theatre at Steppenwolf, 1650 N. Halsted, through May 29. Performances are Tuesday through Sunday at 7:30pm with Saturday and Sunday matinees at 3pm, and 2pm Wednesday matinees May 11, 18 and 25. Tickets $20-89 with $30 pit seats and other discounts available. Buy them online or by calling 312-335-1650.