On Broadway at Roundabout Theatre’s Studio 54. 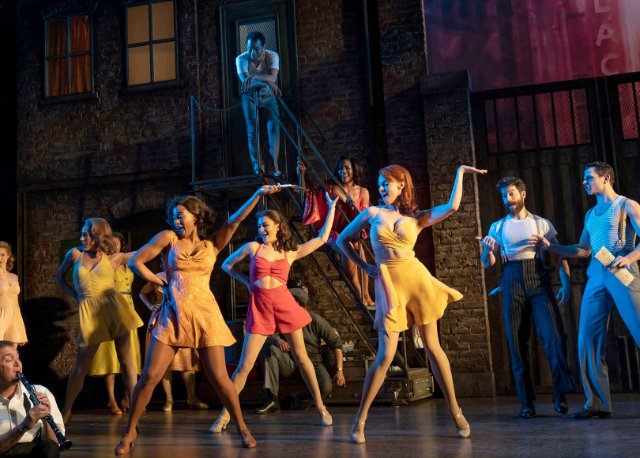 The aftermath of @MeToo has caused problems for theaters producing many classic works. How much do you adapt these to meet modern sensibilities? How will the audience react if you don’t adapt them? Or react if you do change them?

Kiss Me, Kate, Cole Porter’s last classic show (opening in 1948) faces this problem in the revival at Roundabout Theatre’s Studio 54.

It’s not just the time in which the show was written. No, it is the show is a retelling of Shakespeare’s Taming of the Shrew, itself a comedy that is problematic in our times. Like A Merchant of Venice with its underlying disdain and abuse of the Jews, Shrew is about a not-very-nice man wooing and subduing a woman who rejects the values of the society. And to modern audiences, what is worse is she seems to end up complicit in her subjugation.

In the musical, we have two somewhat parallel stories going on. One is an acting company trying out a new musical in Baltimore. We have Fred, the leading man and producer/director/writer,  and his ex-wife, Lilli, a somewhat washed up movie star. The off-stage relationship is tense at best; he needs her for her box office appeal and she needs him since Hollywood has abandoned her. We also have Lois, a young actress and her boyfriend, Bill. Lois seems willing to flirt (and more?) with anyone who can help her career, and Bill is an irresponsible gambler. Yet Lois loves him.

The show that is being performed is a musical version of Taming of the Shrew. In it, Fred plays the boorish Petruchio who comes to Padua to find a wealthy wife, proclaiming that he doesn’t care what she looks like, or what her personality is like. Lilli is Kate, the elder daughter of a wealthy father who is known for her sharp tongue and impetuous temper. (You might think that she is the extreme of Beatrice in Much Ado about Nothing). Kate does not want to marry; she sees marriage as a one-sided ritual with all the negatives affecting the woman. But her father wants to marry her off, partly so that her younger sister, Bianca can marry. Bianca (who is Lois) has multiple suitors but it is Lucentio (Bill) who entices Petruchio to wed Katherine.

The backstage plot involves other complications including Lilli’s engagement to a famous General and two gangsters there to collect on Fred’s IOU for a gambling debt that Bill forged.

So, we have a musical with women being considered “shrewish” for speaking their minds, who use sex and sex appeal for advancement, and who are tamed by strong willed and cruel men who the women comes to love.

Traditionally in Shakespeare productions, Kate is seen as how the title views her – a shrew. But if one reflects for a few minutes on the details of plot, it is clear to see that she has every right to be angry. She has seen society’s view of women and their role; she sees that her father can marry her off without her consent to anyone he pleases; she has seen the games her sister plays with men.

It is not that she is a shrew but a woman who is angry at her powerlessness in society. Why would anyone want marriage when it is forced upon them?

Looked at this way, Kate is the victim of society and later of the man wooing her who is only looking for money. Why would anything think he would treat her well? But Kate is more intelligent than those around her.

Roundabout and director Scott Ellis brought in Amanda Green to go over the script and make adjustments to it, though she does not receive credit.

Most of the changes seem subtle with Kate giving as good as she gets in many scenes.

The almost insurmountable problem is at the end of the show-within-the show: Kate accepts her husband’s domination, though it must be said, one can wonder if that is “only for show”. She may still be calling the shots but in a more indirect way. Shakespeare wrote some wonderful lines that Cole Porter used almost verbatim for Lilli’s final song. That song/lines begins “I am a shamed that women are so simple” and ends with “And place your hands below your husband’s foot;/In token of which duty, if he please,/My hand is ready; may it do him ease.”

These lines drive modern women to see red. But what to do with them? Whether we agree or not, they are the lines Shakespeare wrote and are representative of the values and beliefs of the period in which he wrote and in which the play is set. England may have been ruled by a Queen, but the society still believed in the subservience of women and fathers and husbands had much control over their families and households.

Roundabout’s solution is probably the weakest part of the production. The song is so beautiful and necessary to conclude the play-within-the-play that it could not be cut. So the lyrics were changed with “people” being substituted for “women.”  It is jarring.

But let’s get to this outstanding production. First of all, it is great to have Kelli O’Hara back on Broadway. As Lilli/Kate she once again proves herself a fine actress who can develop chemistry with every leading man she plays opposite. Her voice is ideally suited for Porter’s soaring melodies. I’ve never heard some of these songs sung as well as she does them.

Opposite her, Will Chase is excellent as the blustering Fred and the gold-digging Petruchio. I had forgotten what a fine voice he has; he makes the most of “Where is the life that once I led?” and the duets with O’Hara. Together their voices soar.

As Bill – the gambling “juvenile” lead and Bianca’s suitor, Corbin Bleu shows off his tap dancing skill though it may not truly fit the show. Yet there is something in his performance that is lacking; it is hard to feel as if he believes in his character and his interactions with Bianco/Lois are lukewarm.

I saw the understudy, Christine Cornish Smith as Lois/Bianca and she was terrific. She handled the variety of music – from “Why Can’t You Behave?” to “Always True to You in My Fashion” expertly. I’m sure Stephanie Styles does it equally well.

A couple of other quibbles. “From that Moment On” which was added to the movie has become a standard part of the show, for no particular reason. It isn’t as though there aren’t enough wonderful songs. Plus it is given to a very minor character, General Harrison Howell, Lilli’s suitor who makes Petruchio seem like a feminist with his views of women.

Of course, one of the big songs is “Brush Up Your Shakespeare” which the two gangsters, here played by John Panlow and Lance Coadie Williams put over with élan.

Choreographer Carlyle’s work and the cast stop the show with “Too Darn Hot” which opens the second act.

Everything about this production is first rate from the set design by David Rockwell (backstage and Padua), costumes by Jeff Mashie, lighting by Donald Holder, sound by Brian Ronan and orchestrations by Larry Hochman.

Kiss Me, Kate is one of the classics of American musical theater. You owe it to yourself to see this fine productions.

Tickets are available at Roundabout Theatre..