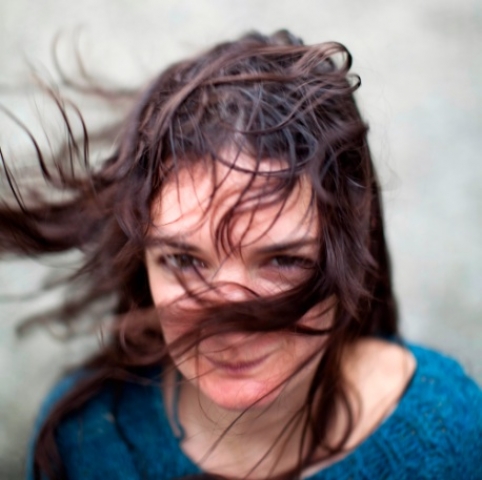 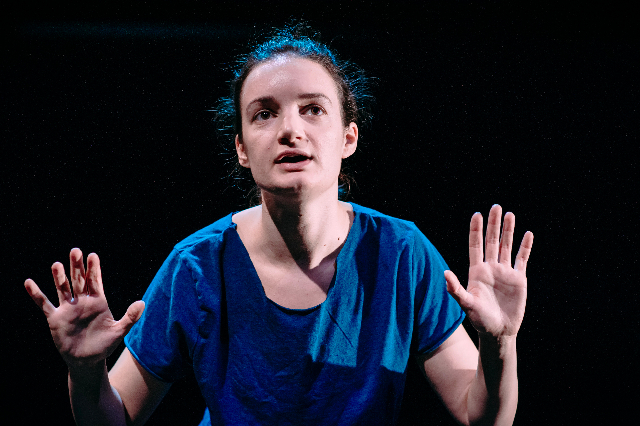 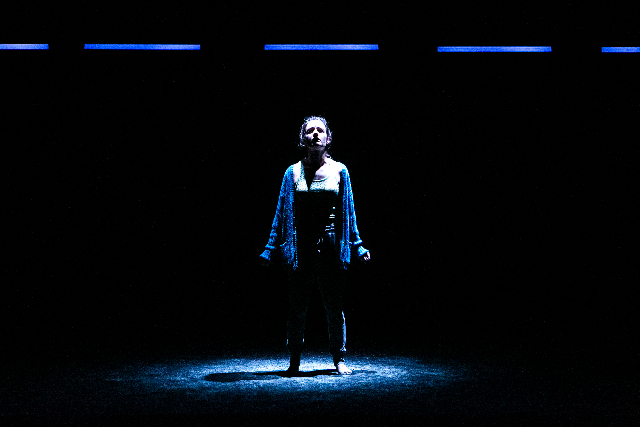 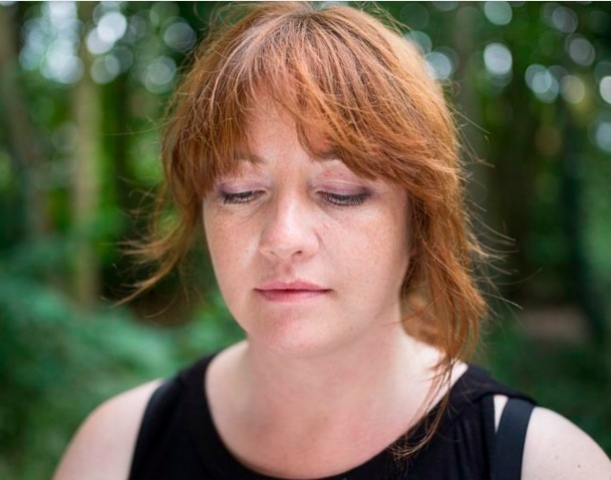 A Girl is a Half-formed Thing
Adapted for the stage by Annie Ryan
Based on the novel by Eimear McBride
Directed by Annie Ryan
Performer:  Aoife Duffin
Baryshnikov Arts Center and Irish Arts Center
Produced by The Corn Exchange and Cusack Projects Limited
April 20-30, 2016

A Girl is a Half-formed Thing emerges from a bleak yet hopeful life in Ireland.  The younger sister of a boy who has brain cancer is left to her own devices by a mother who is absorbed with the boy.  The father, unable to cope, has left home.  The Girl thrives despite sexual abuse and neglect.  Her life is bracketed by her brother's.

At the start the Jerome Robbins Theatre is pitch dark.  From the intense blackness of the stage, the young Girl is captured by a single spotlight.  As she struggles to emerge, the light widens.  Without props and with no walls to divide space, light is used to distinguish areas.  Sinead Wallace's lighting design not only captures a meadow and a stand of trees, but the rooms of a home.  She even uses lighting as makeup.  The Girl's face is smoothed out and reflective after she emerges from the water of a lake.  Two craggy dark lines are created to suggest despair.

Wallace is only one of many superb talents who have mounted this one woman show.  Annie Ryan shaped a novel into a harrowing and compelling performance piece.  She directs so unique voices are given to nameless characters who exist outside time.  No names.  No dates.

The Girl's voice is smooth and often innocent.  It is crossed with the adults. Mama's is at times tender but more often a high-pitched screech.  The seducing Uncle speaks with a raspy edge.

It is Aoife Duffin's monumental and yet simple evocation of 'Girl' in shattered and sacramental language that stands out.  She speaks not only for herself, but for her mother and uncle.  She talks sometimes in second person about her brother, who has a fixating cancerous tumor. Sometimes she is reporting the scene around her.  At other times she inhabits Mama and Brother.  Each character in her wide range is treated with sensitivity.

The language is so thick and evocative that sometimes gesture and subtly defined space is not enough to locate the action. This is a minor glitch in the overall power of the play.

Duffin uses her own voice to unleash dialogue.  Her twisted body shifts and abrupt movements of hand and limbs help us imagine the Uncle and Grandpa.  Her peopling of the stage is both an auditory and visual masterpiece.

Mixed with the sacramental blood of sex, violence and surgery are the visceral cries of pain and of survival.  Shattered language mirrors the Girl's mental state.  A Girl Half-formed is an astonishing evening of theatre, extending Bloomsday deeper into the Irish heart through the miracle of the country's language.  With 'Dia is muire phult'  we are invited in.