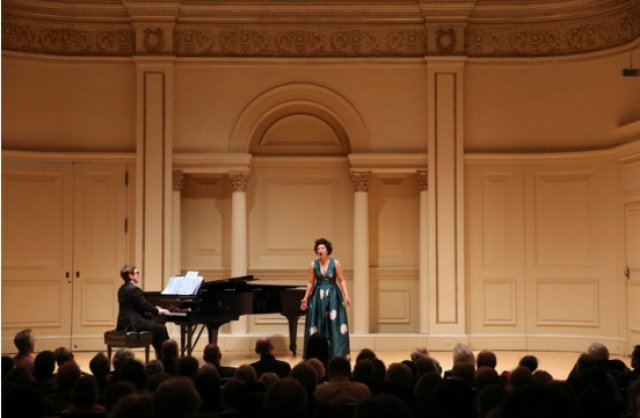 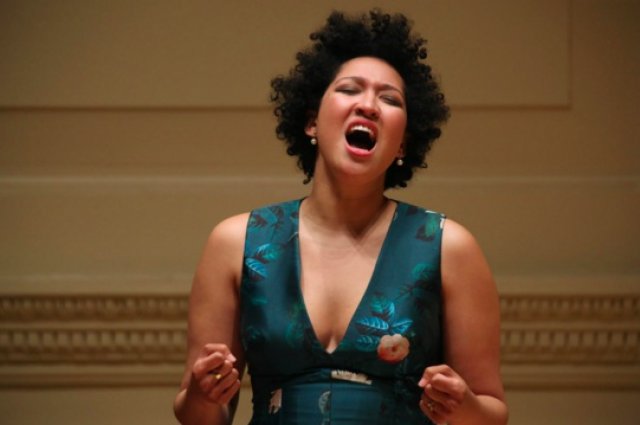 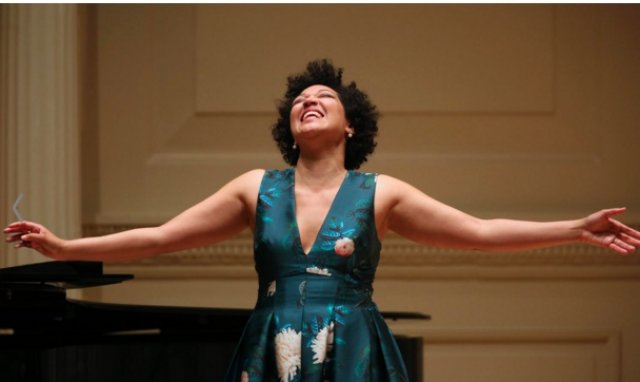 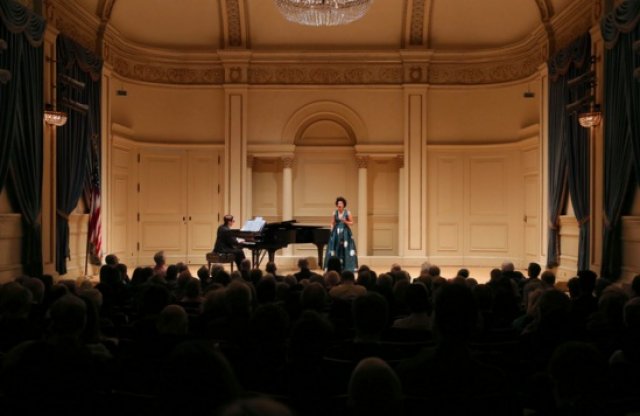 A Weill Hall concert honoring Alberta Hunter and Schubert, among others

Julia Bullock is a songstress. Words are charged with meaning. She cares about the subject.   She is such a master of her art that she can focus on meaning.  To her, being a woman and of color are important. She can be feisty and full of fury, but does not impose. Rather, she offers.

This has been clear since she shucked off an opera career, except when Peter Sellars is involved. Her interest is in advancing her interests, but she is never preachy.

Instead she is thoughtful and full of feeling. Yet she is also witty and ebullient, celebrating life in all its complexity and richness. She is not going to be demolished by a hundred performances of Mimi or Tosca. Like Lawrence Brownlee who brings his Cycles of Being to Carnegie next week, she is going to use her talent to help us understand. Both singers merit love letters from the audience.

Bullock swept onto the stage in a long green dress whose full skirt was filled with white flowers reminiscent of the gardenias Billie Holiday wore in her hair. After Schubert, Samuel Barber and Gabriel Faure, we dug into Holiday, Alberta Hunter and Nina Simone with the singer.

In her most recent foray with Sellars, Girls of the Golden West, some of the feisty passion that characterizes Bullock got swallowed up in the California gold rush. At Weill Hall in Carnegie she seized the stage, and with her cohort, the masterful pianist John Arida, moved from the exquisite tones of Schubert to rollicking jazz improvisation.

From Schubert, Bullock selected a song whose text is often attributed to Johann Wolfgang von Goethe. Bullock has discovered that a lady was the poetess Marianne von Willimer.  Bullock gives Willimer her due and more so.

The top of Bullock's voice is as pure as it has always been. The middle and lower ranges have become richer and more textured. This gives a robust underpinning to the lighter flights of fancy.

Bullock announces, in each perfectly articulated phrase and notes often extended into the atmosphere, that attention must be paid. She is brave and determined. Her immense musical gifts are generously offered on behalf of insights and concerns.

In her selection of works from Samuel Barber and Gabriel Faure, she chose less well-known cycles. Barber’s Hermit Songs were based on incidental poems written by monks and scholars on the side of manuscripts they were copying. W.H.Auden ended up doing the text. Bullock is clearly inspired by the singer whom the composer chose for the work's world premier. A student at the time, Barber heard Leontyne Price practicing in her teacher’s studio. The composer instantly made Price his choice.

These songs often have no meter. Bullock was inspired to follow the irregular rhythms of the words. Radiant, blunt, sometimes caustic, whatever the mood, Bullock takes hold and delights in it. In "The Praises of God,” Bullock voice becomes a whirling dervish.

Bullock is attracted to the point of view of Gabriel Faure’s "Les Chansons d’Eve." She wraps herself in the Garden of Eden from Eve’s point of view, rhapsodizing about the amazing world of nature of which she is a part.

In the second part of the program Bullock honors the singers in whose mold she sees herself. The sparkling chandeliers of Weill Hall and its elegance are a great place to honor Albert Hunter, Cora “Lovie” Austin, Billie Holiday and Nina Simone.

John Arida grooves on Bullock and on the songs she sings. He even got to riff and improvise. Schubert would have loved it. He would have loved the whole evening. It was music making at its very best.