First Love Is the Revolution by Rita Kalnejais

At Steep Theatre in Chicago 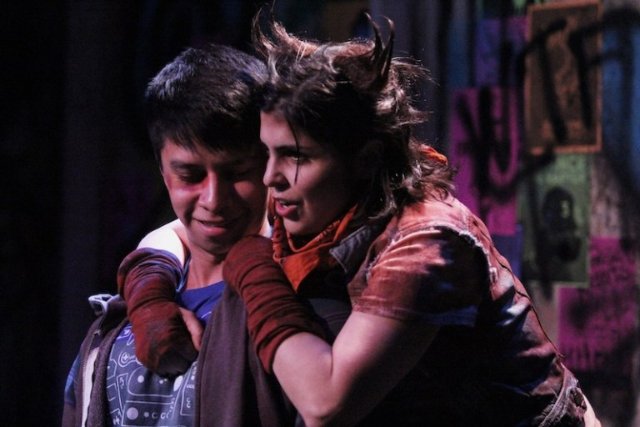 Jordan Arredondo and Isa Arciniegas as Basti and Rdeca. Photo by Gregg Gilman.

Heartbreaking and hilarious. Both at the same time. First Love Is the Revolution at Steep Theatre is a classic romance where two young people break from their warring families to be together. But it isn’t Romeo and Juliet or Eloise and Abelard. It’s interspecies love between a young human and a red fox.

Rita Kalnejais’ play, which premiered in London in 2015, is a gorgeous display of animal choreography, directed by Devon de Mayo. As I watched this zoo-rama of animals scuffle among themselves and fight their antagonists, both animal and humans, I was smitten with the energy and genius of their movements. But despite the charm of the animals (there’s an adorable cameo by two chickens and a four-star performance by a snarling and chained-up guard dog), this is a serious story with much to say about love and violence.

The heart of the story is Cochineal, Mother Fox (Lucy Carapetyan) and her three always-hungry and flea-scratching cubs: Rdeca (Isa Arciniegas), Gustina (Jin Park) and Thoreau (Curtis Edward Jackson). They lost their father recently in a car accident; he was run over as he was foraging for a corndog on the road.

Mama Fox brings in a wimpy, bedraggled mole named Gregor (Alex Gillmor). Rdeca is to practice on him; she’s old enough to learn killing now, as her two siblings have done. “He tastes nasty,” Rdeca says, after biting him in the neck. “We won’t eat him,” says Cochineal. “Moles are just for practice.” But Rdeca isn’t finished. She has to bury the mole. “We bury our dead. Always. It’s fox law,” says Cochineal.

The foxes wear costumes of jeans, tights, tshirts, vests and hoodies, splotched with fox colors. Their ears are pointed hair sculptures. Their den is a display of overturned grocery carts, junk and fox graffiti (including a poster for a concert by Amy Winemouse). But when the cubs (or kits) snuggle together to sleep, you will be reminded of human kids you have seen curl up for a nap.

And thus, the playwright and director create sympathy for a fox family. But this isn’t anthropomorphism in a cutesy Disney sense. Don’t bring the kids to this show. (In fact, there’s a scene of interspecies lovemaking that might offend the sensitive, although it’s handled discreetly.)

The main human is 14-year-old Basti (short for Sebastian, played by Jordan Arredondo). His father is Simon (Jose Nateras). They’re lost their mother and wife, because “she’s been sad lately,” Basti says. One night, Basti goes hunting for a fox so he can make his mother a fur stole. And kismet. He traps and meets Rdeca, out scouting for prey. They find they can communicate and begin learning about each other. But neither Simon nor Cochineal approve of this budding relationship. “Did it speak fox?” Cochineal asks, and warns “Never accept food from humans. Never.”

Simon is having trouble being a good father and connecting with his son, trying to do it through sports at first. But he does make a tentative connection with Gemma (Destini Huston), the upstairs neighbor, who “loves foxes.”

And then there are the chickens—Bailey and Quentin—played with perfection by Carpetyan and Gillmor. Movement, gesture, sounds and costumes. Of course, in this kill-or-be-killed kingdom, the chickens don’t have much of a chance. Sadly.

Another excellent performance is Jackson’s as Rovis, an Alsatian shepherd, who happens to be guarding… something. He’s ferocious and brutal. I remembered the last time I saw Jackson on stage: As a quiet and thoughtful writer, William Inge, in The Gentleman Caller at Raven Theatre. Jackson definitely shows the range of his acting chops with these two roles.

Both Arredondo and Arciniegas inhabit their roles intelligently. And Lucy Carapetyan will tear your heart out as the mother fox, trying to keep her cubs safe and fed.

De Mayo’s direction is superb as she treats this story with tenderness. The choreographed movement, even in the lethal scenes, is meaningful. And Mieka van der Ploeg’s costumes work brilliantly as part of the plot. When a creature is killed, its shirt or jacket is pulled off and we see the lining is blood red.

The ending gets us thinking about what the playwright’s intentions might be. Kalnejais gives us no real clue—in her dialogue with dramaturg Sarah Slight published in the playbill or in any interviews with her that I have read. She does say (in the video interview posted below) that she is interested is how we dehumanize each other and use that as an excuse for violence.

Kalnejais is an Australian native now based in London. Her other plays include Babyteeth and This Beautiful Future. She also writes screenplays, short stories and essays. The theater brought Kalnejais to Chicago to work with the Steep team on changes in the script for American English and for this audience.

First Love Is the Revolution runs 90 minutes with no intermission and continues through May 25 at Steep Theatre, 1115 W. Berwyn Ave., next door to the Berwyn Red Line station. Tickets are available at two prices: general admission $27 and reserved seats $38; $10 access tickets are available for students and artists.