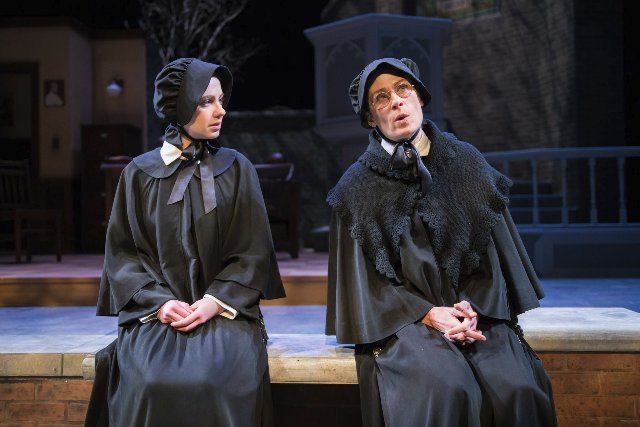 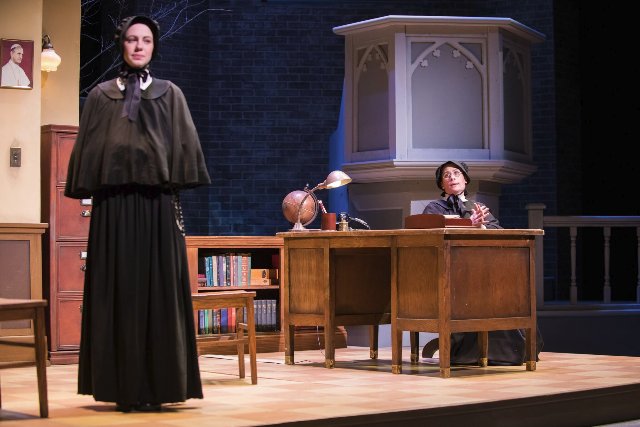 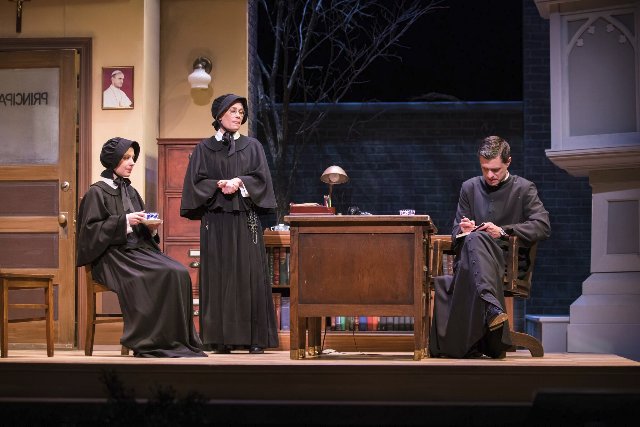 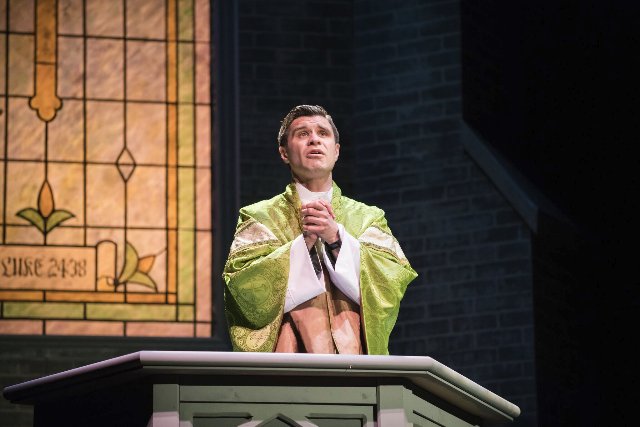 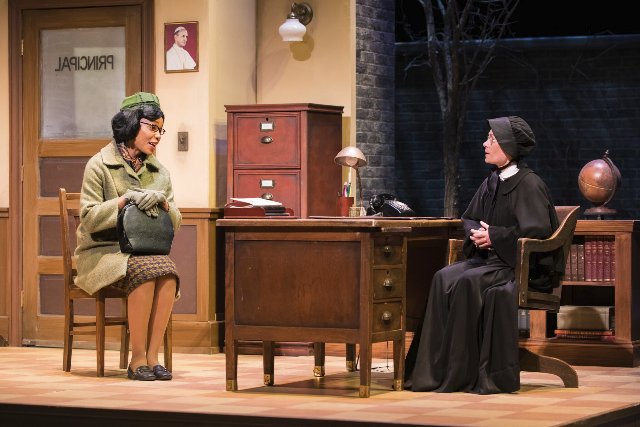 Milwaukee Chamber Theatre ends its current season by entering the uncertain world of John Patrick Stanley’s Doubt: A Parable. While the shock factor of priests abusing children has somewhat subsided in the more recent wake of school shootings, there is still much to appreciate in Shanley’s well-crafted play.

Doubt premiered at the Manhattan Theater Club in New York in 2004 and won the Pulitzer Prize for Drama and the Tony Award for Best Play in 2005. It takes a hard-hitting look at the Catholic Church, American society, sexism, racism, and education.

The Milwaukee production’s director, C. Michael Wright, allows all the subtleties of this delicate piece to come together with the help of a talented cast. The play continues through April 29 in the Cabot Theatre, one of two stages within the Broadway Theatre Center. The Center is in Milwaukee’s Third Ward, a place where residents can shop, dine, live and enjoy entertainment within the perimeters of this renovated urban district.

The question permeating the entire play is whether a priest did—or didn’t—molest a 12-year-old child. In fact, the first words spoken in Doubt are from the accused priest himself, as he addresses his flock from the pulpit. “What do you do when you’re not sure?” he asks. He goes on to relate a parable that eventually becomes intertwined with his own life.

One of Shanley’s strengths as a playwright is his take on the traditional hierarchy of the Catholic Church—starting with the Pope, to the cardinals, to the bishops, to the parish priest, to the nuns. In this case, the doubt about Father Flynn belongs to an older nun, Sister Aloysius (Colleen Madden). She leans heavily on her intuition for guidance. She is convinced “beyond a shadow of a doubt” that her assumptions are correct. But as she is “only” a nun, one must wonder whether gender imbalance is at the heart of her conviction.

Sister Aloysius is leery of this priest’s casual attitude toward their students in general. It goes against the rigid rules she has enforced over the years. She counsels a younger nun/school teacher to demonstrate her leadership in class by having “wits that are cold.”

In these examples and others, Madden gives us a Sister Aloysius with fire in her belly. When she is at first unable to accuse the priest directly, she vents her ire on the younger nun, Sister James (played with a sweet sincerity by April Paul). Sister Aloysius fails to see that by trying to extinguish the love Sister James feels for her students, she may well have destroyed the goals of this competent newcomer.

In a remarkable performance as Sister James, actor April Paul cannot reconcile her own feelings for the children with the rules set down by her superior. She also does not share her superior’s hunch about Father Flynn, whom she believes is innocent.

This discussion between two nuns is merely a warm-up for the inevitable confrontation between Sister Aloysius and Father Flynn. On his part, Father Flynn (a warm, but self-satisfied Marcus Truschinski) is at first taken aback by Sister Aloysius’ claims. However, he knows the church rules as well as Sister Aloysius, and refuses to bend to her will. He taunts her by asking her to share her thoughts with one of the church’s superiors, which he knows she is forbidden to do.

The play is set in 1964, a time of profound change in America as well as in the Catholic Church. The discussion between one nun and one priest represent so much more than a single incident when considering the larger issues at work in society, and in the Catholic faith.

One of the play’s best-played scenes involves the mother of the (unseen) young boy who may have been “inappropriately touched” by Father Flynn. He is the first black kid to attend the formerly all-white school, a fact which makes his mother proud. Mrs. Muller (played by a sympathetic Malkia Stampley) is asked by Sister Aloysius to come to the school for a talk. Surprisingly, Mrs. Muller is unfazed by Sister Aloysius’s claims. Without revealing the reasons why (and spoiling the plot), Mrs. Muller gives Sister Aloysius a blunt lesson on racism.

Mrs. Muller refuses to let any behavior by the priest prevent her son from graduating from this prestigious school, and thus putting himself in an advantageous position to go to a good high school. It seems that even Mrs. Muller knows society’s rules and how to turn them to her advantage.

Madden (as Sister Aloysius) gives a standout performance as a nun who refuses to yield her conviction. She feels it is her responsibility to rid the school of what she views as a predator. It is only afterwards that her conscious gets the better of her, and she confesses her own feelings of doubt to an uncomfortable Sister James.

The production is played out on a large set that incorporates aspects of several locations. These include: the church pulpit (framed by a gorgeous stained-glass window), a principal’s office, and an outdoor courtyard. By lighting different areas of the set during individual scenes, it allows the play’s tension to remain intact throughout. Credit for this effect goes to set designer Steve Barnes, assisted by lighting designer David Gipson.

Milwaukee Chamber Theatre hits a high note with this powerful, intense play. It may not be quite as shocking as it was when the play first debuted (and this reviewer saw it in New York), but it remains topical in its insistence that the element of doubt can be as demonizing as certainty, depending on where the power exists.

Anne Siegel is a member of American Theatre Critics Association.

Doubt: A Parable continues through April 29 at the Cabot Theatre in the Broadway Theatre Center. For tickets, contact the Milwaukee Chamber Theatre box office at 414-291-7800, or click on milwaukeechambertheatre.com.