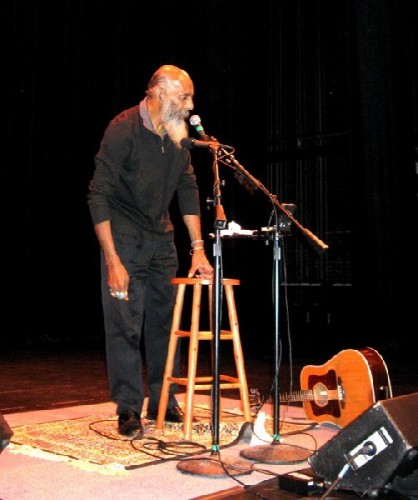 Richie Havens on stage at the Colonial Theatre in October, 2010. Giuliano photos. 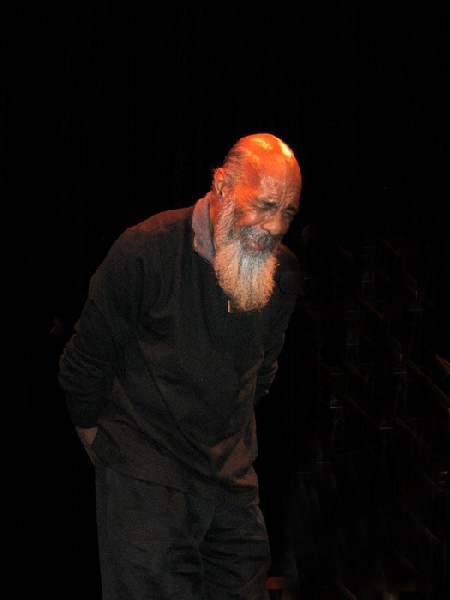 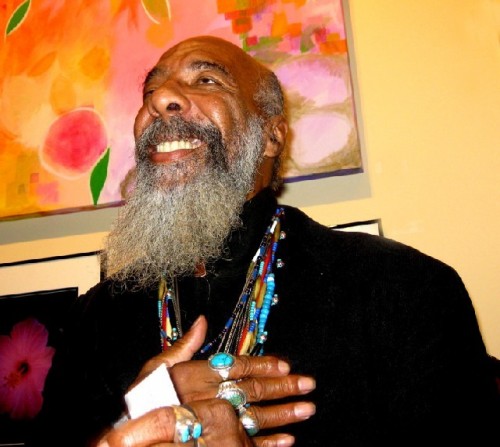 Recalling the heart and soul of a great artist. 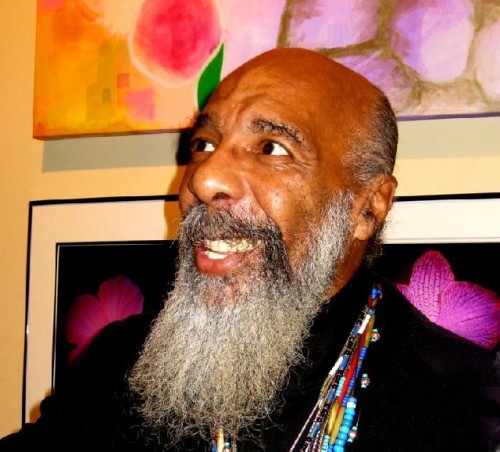 A career that sustained for decades based on a historic Woodstock performance. 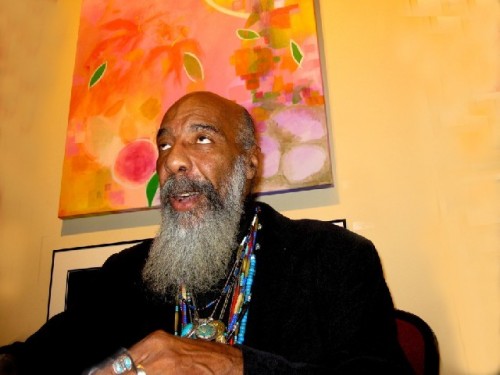 Interacting with fans after the concert in Pittsfield. 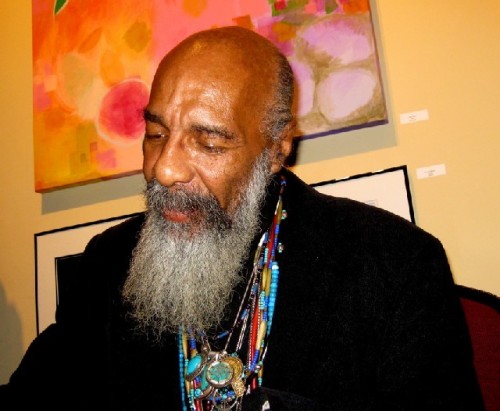 Flying into Woodstock by helicopter he later recalled “"It was awesome, like double Times Square on New Year's Eve in perfect daylight with no walls or buildings to hold people in place."

Originally slated for the fifth spot on opening day of the rock concert that spawned and defined a nation he was put on stage when the other bands and equipment were snarled in the most epic traffic jam of the 20th century.

Navigating back roads through the Catskills in a vintage, post war Pontiac the road eventually became impassable. Parking meant hiking for what seemed forever with Joey Sefter and Wild Strawberry who I met earlier that summer at the Newport Jazz Festival.

Eventually, we made our way to the pasture of Max Yasgur’s dairy farm in Bethel, New York. We approached from the top of a hill, covered with a sea of humanity, working our way down front.

With press credentials we made our way backstage to mingle with the musicians and crew. Fresh fruit and champagne flew in regularly with the helicopters ferrying musicians.

Out front the MC Wavy Gravy kept the audience updated during the interminable delays between sets. There were a few birth announcements as well as warnings about which form of acid being pedaled ubiquitously was safe to take. It seems the Orange Owsley Sunshine was terrific as well as the Blue Window Pane.

Havens opened with “Minstrel From Gault” at 5 p.m. on Aug. 15, 1969. The set was planned to include just four songs. With encores and his sustained style of delivery it stretched to more like ten. He remained on stage for a couple of hours.

Running out of material he improvised. It was an era marked by social change, the Vietnam War and political turmoil. His anti war emotions were poured into the hit “Handsome Johnny,” which he wrote with the actor Louis Gossett Jr.

Looking out at the audience, capturing the zeitgeist like a firefly in a glass jar, he started to chant “Freedom, Freedom.” Improvising that mantra conflated with the Gospel song “Sometimes I Fell Like a Motherless Child.”

That segment of an historic performance was included in the film. It captured him stooped over, his saffron colored Indian shirt soaked through, flailing at his guitar percussively while inching his way off stage. He had launched the greatest rock concert ever.

I came upon a child of God
He was walking along the road
And I asked him, "Where are you going?"
And this he told me...

We are stardust.
We are golden.
And we've got to get ourselves back to the garden.

Then can I walk beside you?
I have come here to lose the smog,
And I feel to be a cog in something turning.

Well maybe it is just the time of year,
Or maybe it's the time of man.
I don't know who I am,
But you know life is for learning.

We are stardust.
We are golden.
And we've got to get ourselves back to the garden.

By the time we got to Woodstock,
We were half a million strong
And Everywhere there was song and celebration.

And I dreamed I saw the bombers
Riding shotgun in the sky,
And they were turning into butterflies
Above our nation.

We are stardust.
Billion year old carbon.
We are golden...
Caught in the devil's bargain
And we've got to get ourselves back to the garden.

(To some semblance of a garden.)

If as Mitchell sang we were a half a million strong that number later swelled by millions. It came to include every hippie in America who saw the movie or played the album.

The momentum of Woodstock was enough to sustain Havens through a career which ended only recently when he stopped touring because of poor health.

On October 10, 2009 he performed at the Colonial Theatre in Pittsfield. Susan Hall wrote about his appearance a few months later at Carnegie Hall. He returned to the Berkshires that following summer in a concert at Mass MoCA.

Covering the Colonial Theatre I wrote  “It was déjà vu all over again last night when, just like Woodstock some 30 years ago, that perennial flower child, Rich Havens, festooned in love beads with rings on all his fingers, warmed the hearts of the audience at the Colonial Theatre in Pittsfield.”

It was the last of many times I heard him. Pre Woodstock he was frequently featured as an opening act for Bill Graham’s Filmores, East and West. Prior to that, he scratched out a living hopping from one Village folk club to another while passing the hat.

His was an unusual presence in the largely white Village folk scene. While he wrote songs he mostly earned a reputation for cover arrangements of Dylan and Beatles songs. In that regard evoking comparisons to Joe Cocker. With chanted, rhythmic, sustained choruses like those of Jose Feliciano in “Light My Fire.”

He had an ability to find the emotional essence of a tune like The Beatles’ “Here Comes the Sun” or Dylan’s “All Along the Watchtower” and transform them into galvanic anthems.

Perhaps he belongs to that conflated term Folk Rock because of the range of material. But he rarely fronted a band preferring to work with another guitarist to embellish his throbbing, repetitious, open chords with percussion. He never really evolved as an instrumentalist and I was always stunned to observe how his pick sawed through the face of acoustic guitars.

After a set of Concerts on the Common in Boston in 1970, the producer, John Sdoucos, invited me to meet with Havens in the trailer after the performance. He had taken his dentures out and mostly mumbled through a throaty litany of love, peace and happiness. Of course we talked about Woodstock which would be the focus of his interviews over the years.

"We more or less managed Richie at that time" Sdoucos recalled in a phone conversation from Boca Raton where he continued to promote concerts nationally. "We got him into clubs and colleges wherever we could. From there we got him into concerts and festivals. He did anything and everything we asked him to do.

"Our relationship lasted into the Newport Folk Festival era in the middle 1970s. I went on to a national focus with festivals, the Newport Folk Festival, and the Kool Jazz Festival. So I no longer had the time to devote to him. Our relationship worked for all of us. From that time on Richie was all over the place. We helped to establish his career.

"It was a love relationship. He was so giving and cooperative to our mutual fans. He was a sweet guy. It was always like that. Never a dull or bad moment with Richie. He was always about 'lets go.' We got him good gigs and he kept coming back with great stuff on stage. We gave him good dates, solid dates, and he always delivered. He was a damned good, wonderful, giving guy. It was always about giving with him. When it comes to working with people in show business Richie was the best."

It was mostly a sense of nostalgia which motivated me to cover his Pittsfield appearance. There wasn’t much about the music that had changed over the years. The intervals, raps, reminiscences, insights between songs, however, seemed to have grown ever longer. They rambled and at times he lost his way.

The audience was patient and rewarded him with adulation and applause when he found his way back into the music.

In that signature rough, gravely, chanting, autodidactic, mantra manner he had one of the most memorable voices and unique styles of his generation.

As I wrote in 2009 “His singing similarly wanders over, under, and around the melody stretching the lyrics out into powerful, deep throated, earthy anthems. While never faithful to a tune he has a way of shaping and making it his own.”

A vivid memory of his music rings in my head as he is laid to rest. Richie is and always will be in my heart and soul. It sustains as one of the paradigmatic Woodstock Nation’s finest moments.