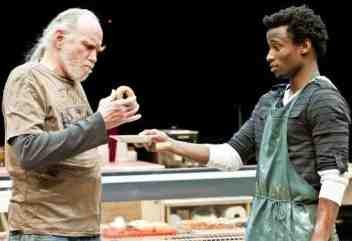 Can anyone make a good donut? 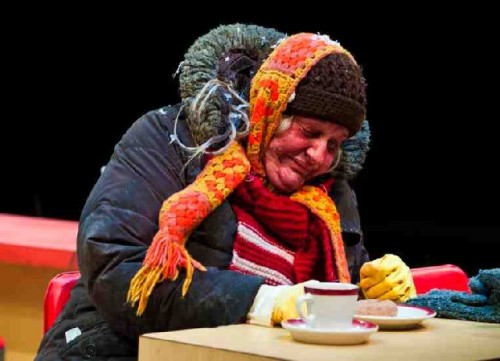 Lady is welcome at Superior Donuts

Superior Donuts at its heart is the story of a white man of Polish descent who is detached from his heritage, his daughter, and sense of himself as a man.  He takes on a new employee, a young African American who is in deep trouble but also deeply talented.  Mike Hartman portrays an aging hippy with good humor and toughness.

The dance between Arthur P (whose last name is unpronounceable) and Franco, named not after the Generalissimo but rather the Pittsburgh Steelers famed running back, is a moving delight.  Franco, a subtly fleet Sheldon Best, asks Max, who owns a neighboring store and wants to buy Superior Donuts, if he doesn’t know about the Immaculate Reception.

Max, a Russian, doesn’t, although many audience members recall the famous play by Harris that won the season for his team.  Few people remember that Harris formed a bakery to provide nutritious foods for school children, including a “super  donut.’

Franco’s language from the start suggests a young black man educated way beyond the ghetto.  Articulate, his wisdom is often more practical than bookish.

How does Franco know that a single woman police officer, played with great charm by Jeanne Paulsen, is subtly making a play for Arthur P.?  How does he know what signals Arthur should send out to indicate interest, including chopping off his ponytail, good only for girls and ponies.

Arthur P. is also a surprise.   When Franco brings out his great American novel, which he has written by age 21, he notes that the title, “America Will Be,” comes from Langston Hughes.

Arthur shows interest in reading the novel, but Franco resists. He suggests a contest.  If Franco wins, he gets to make the donut shop into a cross between Starbucks and a performance space.  If Arthur wins, he gets to read the novel.  Both put five bucks down on the table.  Franco lays down the rules.  Arthur has to name ten African American poets.

Ever generous, Franco gives Arthur one: Hughes.  Arthur is fumbling with nine to go.  Franco is chuckling, already sensing the win.  He grabs the ten dollars from the tabletop.

Suddenly Arthur spews forth a flood of names.  He has improbably caught the pass, takes his money and now has the right to read.

So it goes between a beaten up old war defector and an ambitious young black man.  No one does dialogue better than Letts.  Under the direction of Bruce K. Sevy, all the nuance and pleasure of the language shimmers.

Sprinkled throughout the play are Arthur’s monologues, in which Hartman touchingly fills us in on Arthur's life history.  Arthur was not a resister, because that takes fight.  No, he was an evader.  Arthur is self-aware.  He knows he evades everything.

This is a harsh piece full of humor.  It feels a little like an update of American Buffalo.  The donut shop is full of the detritus of life, first and foremost, a homeless woman, Lady, etched with great feeling by Kathleen M. Brady.  Her choices are often between an AA meeting if she goes south and a bar if she goes north.  Also, as Franco notes, people stay away from donuts today: too much saturated fat.

In the thankless roles of a collection team who will stop at nothing to get their money, John Hutton and Scott Thomas are menacing and agile.

Robert Sicular as the Russian mastermind, a racist who can’t stop calling African Americans ‘mothers’, is contorted and delicately treads the line between crudity and touching ambition.  As his nephew Jeffrey Evan Thomas is a complete surprise.  He hardly seems a man to sit on a bar stool ogling an unresponsive bartender but fearing to approach her, because she would dismiss him and then he would die from not being able to look at her.  Such are the twists and turns on this compelling drama.

While circle in the round may not be the most manageable format for this play, the shop in Uptown Chicago rings true as do the characters.  Thrown together by circumstance, both Arthur P. and Franco survive and may even thrive.  Proving that Arthur P. is no evader may not have required as much ‘fight,’ but certainly the high dialogue between the two principals is a lesson in bridging the racial divide.  This is a provocative and engaging evening of theater.