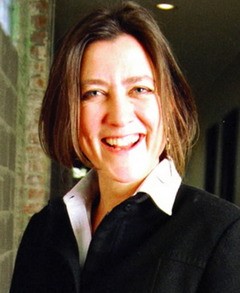 Paola Morsiani,to take over as director of major college museum.

Purchase College President Thomas J. Schwarz announced today that Paola Morsiani, Curator of Contemporary Art at the Cleveland Museum of Art, will become the seventh director of the Neuberger Museum of Art of Purchase College, effective July 1, 2012.  As director, she will oversee an institution that has achieved international stature for its outstanding collection of modern, contemporary and African art, as well as its innovative exhibitions presenting established modern masters and cutting-edge contemporary artists.  She replaces Thom Collins, who became director of the Miami Art Museum.

“Ms. Morsiani’s fine record of accomplishment will serve her well as she builds on a distinguished tradition of leadership at the Neuberger Museum,” said President Schwarz. “Her commitment to contemporary art and her scholarship, professionalism, and energy will advance the Museum’s reputation as a cultural and intellectual magnet for modern and contemporary art, and will enhance its regional and national audiences.”

During the course of her career, Ms. Morsiani has interested audiences in contemporary art by engaging them in exciting ways with the emerging artists of our time. “Her enthusiasm for introducing the newest talent and for eye-catching presentations is contagious,” he added. “What better way to perpetuate the Neuberger tradition of presenting the best of contemporary art, African Art, and modern art, and maintaining an unparalleled educational resource for the scholars, students and members of the public who are enriched by the collections.”

The new director will be responsible for overseeing all operations and decisions at the Museum including collections, acquisitions and exhibitions, and working with the Friends of the Neuberger Museum of Art donors, and the community-at-large. President Schwarz said that Ms. Morsiani will work actively with the Purchase College academic leadership to incorporate the resources of the Neuberger into the educational experiences of students at the College. She will have responsibility for the highly respected educational programs provided by the Neuberger for the students at Purchase College, the public, and the more than 20,000 students from area schools who annually participate in its programs.

“I am excited and enormously pleased to join the Neuberger Museum of Art, and look forward to working with its dedicated board and staff, and distinguished colleagues at Purchase College,” said Ms. Morsiani, who expects to officially begin working at the museum on July 1st. “The museum is a vital presence on the Purchase College campus. My goal is to continue an invigorating exchange with students and faculty to strengthen the already flourishing cultural life of the campus.”

She also noted that she greatly admires the legacy established by museum founder Roy R. Neuberger, who was an avid collector, driven by the belief that artists contribute to life and culture in essential ways. His guiding principle was to support living artists by purchasing their works. “I wish to support the work of the artists of the future,” she said. “I am joining an institution with an exemplary track record of innovative exhibitions and generous support, and I intend to honor and build on this legacy.”

A native of Venice, Italy, Ms. Morsiani received her Laurea in art history and history of criticism from the University of Padua in Italy, and an MA in Arts Administration from New York University.  During her tenure at the Cleveland Museum of Art, she made a number of significant collection acquisitions, reinstalled the contemporary art collection galleries in the museum’s East Wing, which opened to the public in June 2009, and curated the first solo museum exhibition in the United States of the work of Korean artist Kim Beom. Prior to joining the Cleveland Museum in 2008, she was Senior Curator at the Contemporary Arts Museum Houston, where she curated a number of acclaimed exhibitions and contributed critical essays to numerous catalogues, publications, and journals. Earlier in her career, Ms. Morsiani worked in the curatorial departments of various American museums and independently curated shows for PS122 Gallery, New York; and Art & Idea, Mexico City, among others.

Paola Morsiani received her Laurea in art history and history of criticism from the University of Padua in Italy, and an MA in Arts Administration from New York University.  In 2008, she participated in the Center for Curatorial Leadership fellowship and studied at Columbia University’s Executive Education Program. Early in her career, she worked in curatorial departments at the Drawing Center, New York; Queens Museum, New York; and at the Carnegie Museum of Art, Pittsburgh, Pennsylvania.  As Senior Curator at the Contemporary Arts Museum Houston, she curated a number of acclaimed exhibitions, including Andrea Zittel: Critical Space (2005, co-organized with Trevor Smith and the New Museum of Contemporary Art, New York), Fade In: New Film and Video (2004), When 1 is 2: The Art of Alighiero e Boetti (2002), and Subject Plural: Crowds in Contemporary Art (2001).  At the Contemporary Arts Museum Houston, she also curated several project-room sized exhibitions, with artists Adrian Paci (2005), Abraham Cruzvillegas (2003), Amy Adler, Liza May Post, Francesca Woodman (2001), and Dario Robleto.  A catalogue accompanied each exhibition, with essays by Ms. Morsiani and other writers.

In 2008, she became Curator of Contemporary Art at the Cleveland Museum of Art, where she reinstalled the contemporary art collection galleries in the new East Wing, which opened to the public in June 2009. She also made a number of significant collection acquisitions, including The Casting (2007) by Omer Fast, One and Three Photographs [Ety.] (1965) by Joseph Kosuth, Continuous Mile (2006–2008) by Liza Lou, Jackie Curtis and Ritta Redd (1970) by Alice Neel, and Rho I (1977) by Jack Whitten, among others.  In addition, Morsiani curated the first US solo museum exhibition of the work of Korean artist Kim Beom, which opened in November 2010. She was involved in fundraising, grant writing, and educational outreach and marketing for local, national, and international art audiences; and conceptualized and implemented a pilot program of

ABOUT THE NEUBERGER MUSEUM OF ART OF PURCHASE COLLEGE

Founded 37 years ago as a cultural and intellectual center for modern and contemporary art, the museum’s core collection of 20th century paintings and sculpture contains primary examples of the movements and individuals who shaped modern art. The tenth largest college art museum in the nation with an internationally renowned collection of over 8,000 works of art in all media, the Museum is named after financier and founding patron Roy R. Neuberger, whose extensive art collection forms the core of the Museum’s holdings.  Mr. Neuberger was one of America’s foremost art patrons and philanthropists. He had long supported emerging artists, encouraged a trend of corporate collecting, and donated important works to and financially supported dozens of art institutions.

Masterworks in the museum’s permanent collections include Edward Hopper’s Barber Shop; Jackson Pollock’s "Number 8, 1949"; Mark Rothko’s "Old Gold Over White"; Willem de Kooning’s "Marilyn Monroe," an icon in the history of art; Georgia O’Keeffe’s "Lake George by Early Moonrise," a magnificent early work that predates her Southwestern signature style; and Milton Avery’s "Cello Player in Blue," one of 28 works by Avery in the collection. New additions and collections include the Andy Goldsworthy "East Coast Cairn" limestone sculpture, the Lawrence Gussman Collection of Central African Art, the Alexander and Dina Racolin Collection of paintings, drawings and prints by European and Mexican masters including "Portrait of a Young Girl" by Amedeo Modigliani, and Ursula von Rydingsvard’s monumental wooden sculpture "Bowl With Side Steps."  An outstanding university museum with a strong educational emphasis, the Neuberger Museum of Art presents seven to eight special exhibitions annually in addition to its displays of the permanent collection. The Museum is highly committed to presenting a variety of media, a range of cultural perspectives, and to exhibiting works by women and artists from diverse cultural backgrounds. The museum also offers a full complement of programs readings, films, concerts, lectures, family festivals, and workshops for the entire community. www.neuberger.org

Purchase College, part of the State University of New York (SUNY) network of 64 universities and colleges, was founded in 1967 by Governor Nelson Rockefeller. His aspirations for Purchase were to combine on one campus conservatory training in the visual and performing arts with programs in the liberal arts and sciences. Today, Purchase College, SUNY is a community of students, faculty, and friends where open-minded engagement with the creative process leads to a lifetime of intellectual growth and professional opportunity. www.purchase.edu